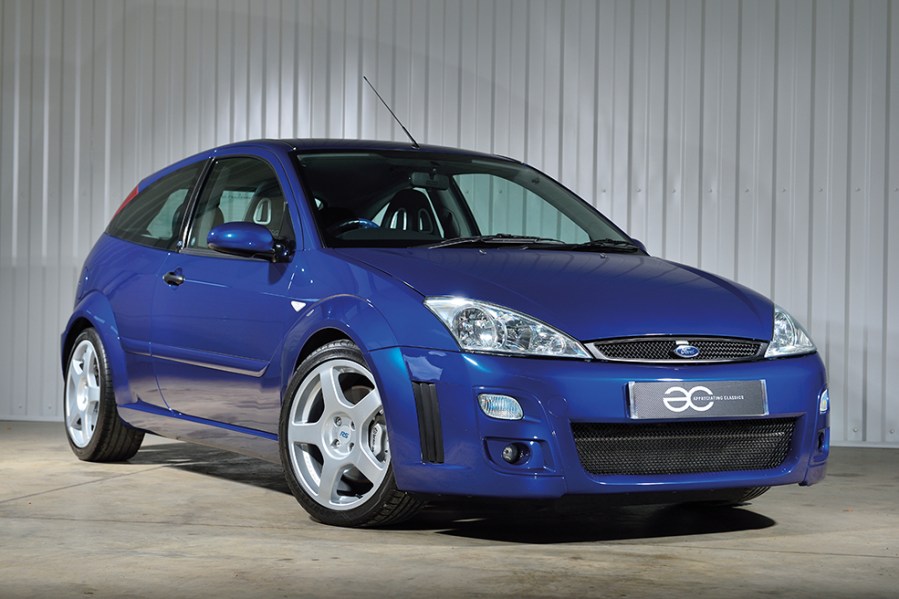 Hailed as an instant classic, the original Ford Focus RS Mk1 is now one of the more-affordable Rallye Sport Fords. Here’s our buyer’s guide to help you find a good one.

Six years after impending legislation and dwindling demand killed off the Escort RS Cosworth and banished the Rallye Sport brand to fast Ford history, Ford breathed new life into its legendary performance division with the 2002 launch of the Ford Focus RS Mk1.

‘RS is back’ shouted the advertising campaign and it wasn’t just marketing spiel either. Granted, the new Focus didn’t have the all-wheel drive or the power of its immediate predecessor, but Ford ensured it delivered on the promise of the haloed RS tag.

The all-important performance was provided by a turbocharged, 1998cc, Duratec-badged engine, although, truth be told, it was actually a development of the Zetec. That said, it was no simple rebadging exercise as the Zetec was heavily reworked with the likes of forged pistons and conrods plus a host of detail changes, such as a WRC-style oil pump and injectors, to help it cope with the rise in power generated by the addition of a water-cooled Garrett GT2560LS turbocharger. An air-to-water intercooler and a lowered compression ratio of 8:1 helped keep it all together when the turbo started boosting towards the RS’s maximum 212 bhp. Ford turned to another proven component for the transmission, rolling out the MTX75 five-speeder. As with the engine, it was given a significant makeover, which included bespoke ratios, a Quaife automatic-torque-biasing differential and a short throw shifter. There was also a heavy duty AP clutch and thicker driveshafts. The drivetrain also included heavily upgraded suspension, a wider track and whopping 325 mm vented front brake discs. 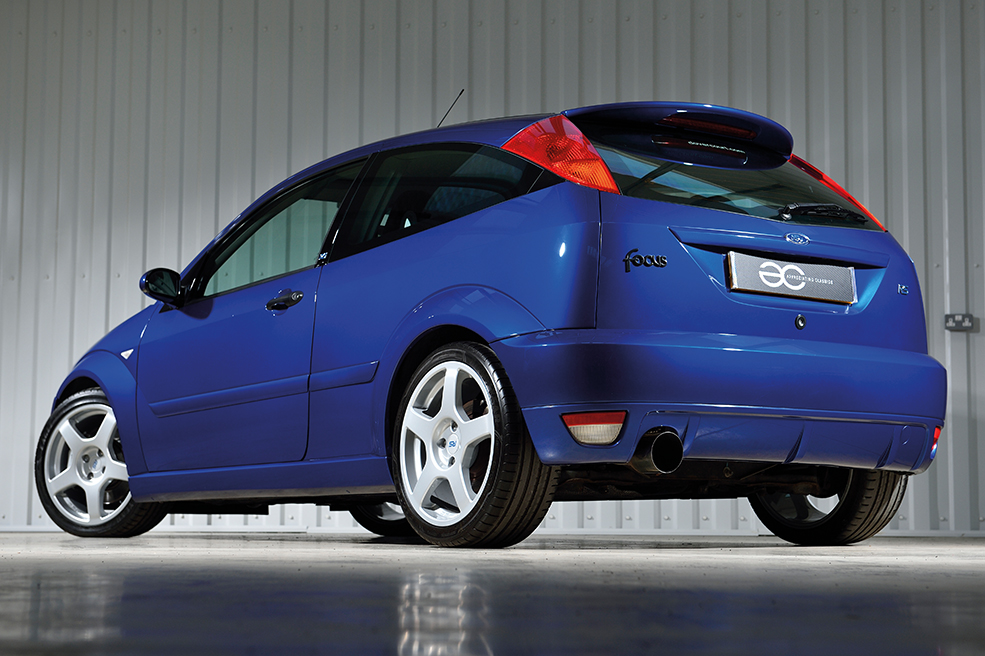 Outside was a lesson in less is more, with Imperial Blue paint, flared wheelarches, subtle spoilers and exclusive 8×18 inch OZ Racing rims giving the RS a distinctive yet understated appearance. Inside wasn’t half as restrained though, with striking Sparco buckets, carbon fibre detailing, a very loud steering wheel and even a push button start.

Whether the interior was a little OTT mattered not one iota, though. When the Focus RS went on sale, the 2002 production rapidly sold out and there was a six-month waiting list. Today, demand isn’t as high, but with growing appreciation, good examples are becoming increasingly sought after. There’s no denying it’s a bona fide classic Ford. 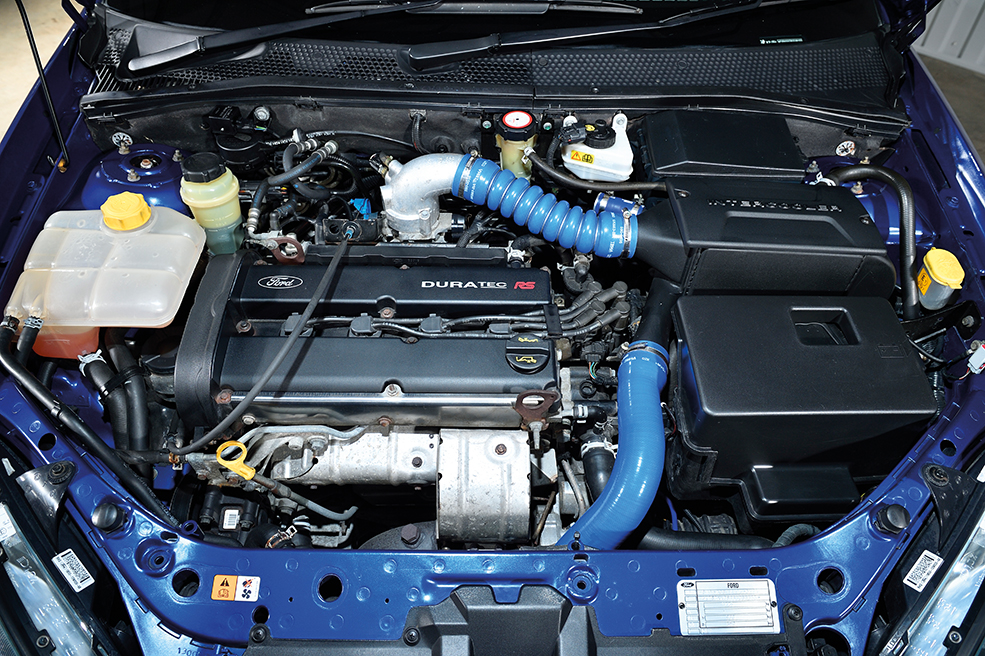 The Ford Focus RS Mk1’s Zetec engine can take over 350 bhp on the stock internals, but there’s still plenty to check. Early cars suffered from weak jubilee clips not sealing the hoses properly, while all models are prone to a leak around the thermostat housing. Loose wastegate hoses can cause overboosting and while it’s easy to cure, the Power Control Module (PCM) will need to be flashed to allow it to relearn the normal settings. Good history is essential and you want to see evidence of quality 5/40w oil being used and cambelt changes. It’s also vital to check the chargecooler reservoir to see if water is being squirted in when the engine’s running. Many cars will have been remapped, but it’s not unusual for a standard car to hesitate at around 4500 rpm. All models can be affected but later cars with the revised AF management seem to be in the majority. However, some owners have upgraded to the AF map from the original AE map and are pleased with the results.

The RS-specific MTX75 gearbox can take the standard power and more. If there is an issue, then it’s likely to be third gear. First and reverse gears can be problematic on high-mileage cars, but this is usually down to gear selector adjustment or the oil level. Clutches aren’t quite as strong, although if not abused they can handle significantly more than the standard power and some cars are still on the original at 90,000 miles. 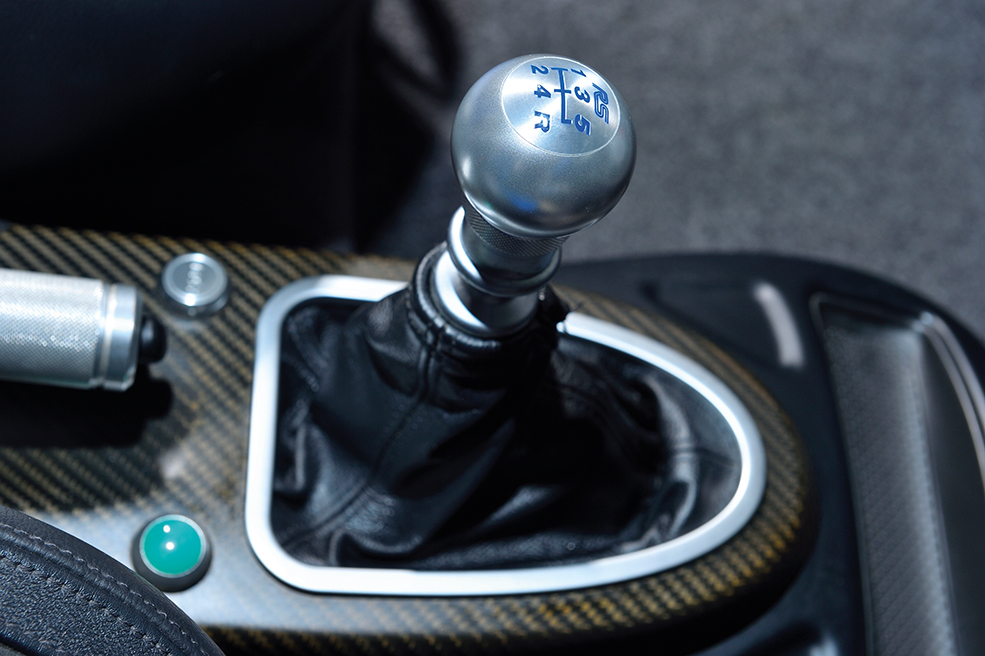 OE-specification front discs and pads are readily available for the Ford Focus RS Mk1, so any judder under braking, squealing pads or corroded rotors aren’t an issue. The standard pads can be noisy and many owners have already swapped to superior Ferodo DS2500 items, but if more power and track outings are on the cards then a significant brake upgrade is considered to be the first modification to make. A lot of cars are already running aftermarket kit, so look for quality parts. Cars registered between December 6, 2002 and December 13, 2002 should have had recall work to stop the possibility of the flexible rear brake hoses rubbing against the plastic arch liners.

Front dampers and bushes aren’t the most durable, so listen for any noises front the front end. Clips for the power steering hoses have been known to rub against other hoses, giving rise to damage and leaks. 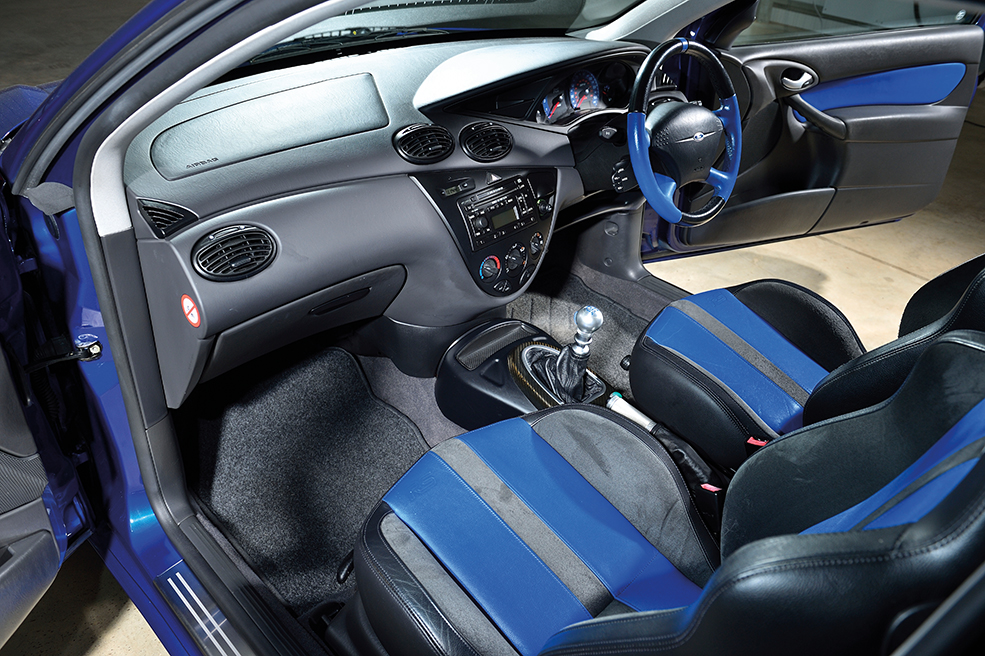 Seat bases of early cars are susceptible to sagging, with Ford even offering an official fix of firmer foam bases with additional stitching. This solution was worked into the production of April 2003-onwards Phase 2 cars. Check the exclusive RS floor mats are still in place as decent second-hand items cost as much as £300.
If you’re looking at a UK car, the glovebox should also contain a leather pouch with a 16-page RS supplement. Steering wheels can get grubby, but several owners have had theirs refurbished via the owners’ club. A lot of plastics are shared with cooking models, but watch for damage to the unique carbon fibre centre console.

A faulty bonnet switch is the usual cause of a misbehaving alarm when it comes to electrics, although it’s also easy to upset it if the battery has been removed. Check the GT fobs are present and the condition of the outer rubber loop, as this part is often damaged and costs £55 alone to replace. Issues with the factory CD changer have been known to drain the battery. A dodgy relay is usually behind the ‘one shot’ wiper action not working. 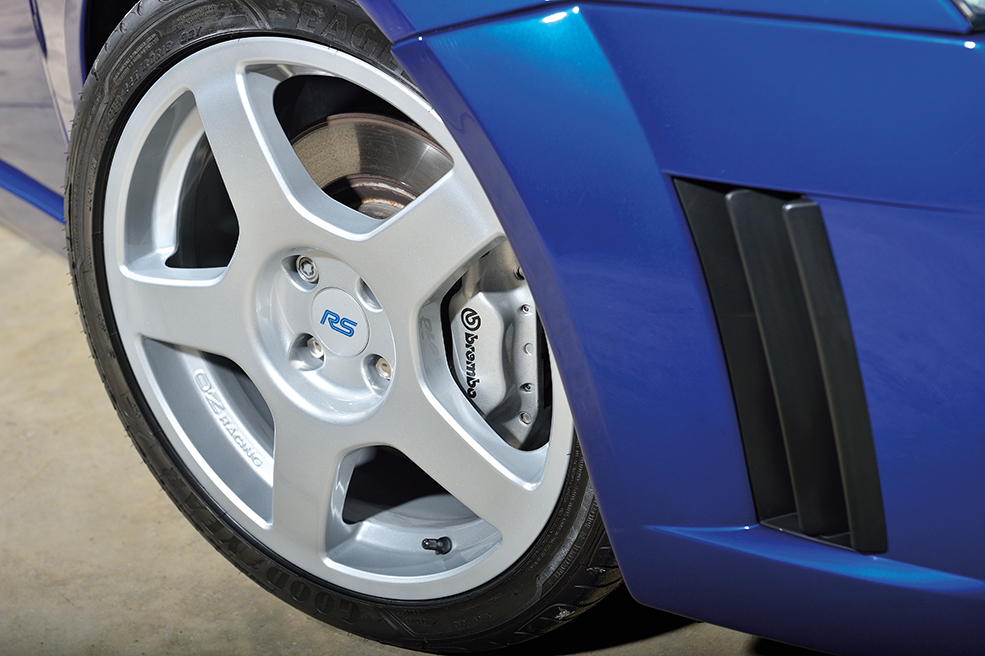 Common rust spots include the sills, rear arches, base of the front wings, around the door mirror housings, below the windscreen, door bottoms and underneath the handle on the tailgate. Unique RS panels are hard to source and expensive, with NOS rear quarters changing hands for four figures and quality rear arch sections at circa £250 per side. However, the commonly rusted sills can be repaired with modified items from a normal Focus by any decent bodyshop. Standard paint is known to be a bit soft, so check for road rash, particularly on the bonnet and base of the rear arches, especially if the latter’s original stonechip protectors are missing. Heat from the engine compartment can cause the bonnet skin to come away from the frame and also warp the plastic top grille on later cars. 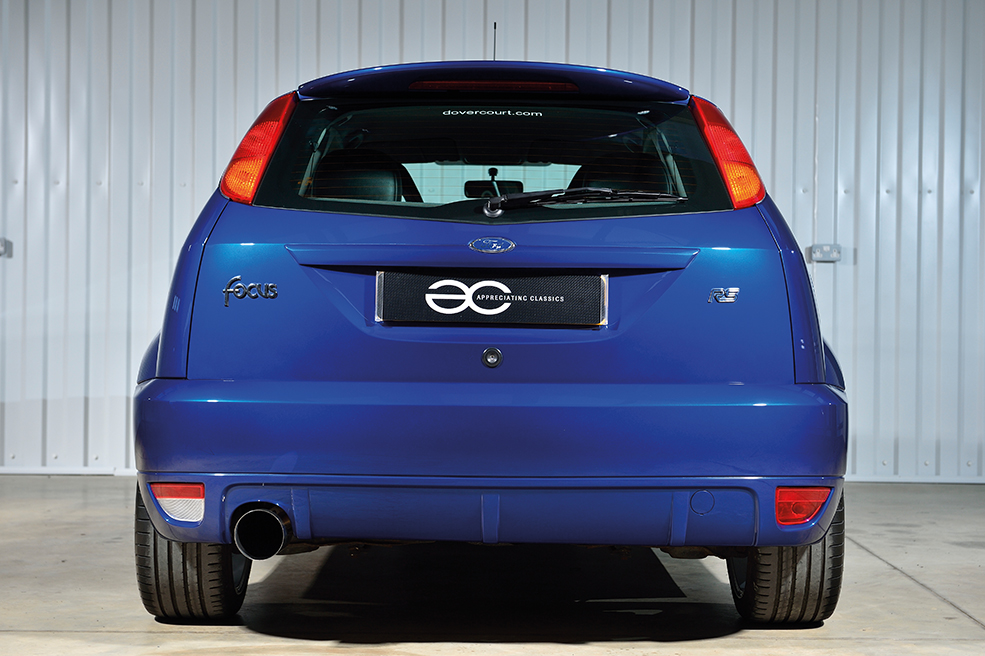