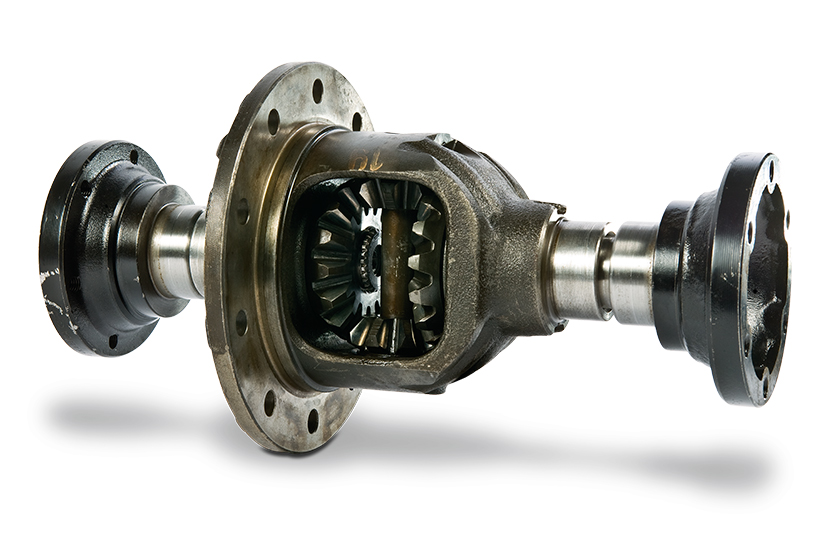 So, what is a limited slip diff and what’s a welded differential? Find out this and more the Fast Car LSD guide…

Although a vital part of any car, diffs have actually been around for over 4000 years, and are actually an ancient Chinese invention. The use of a diff is to allow power to be transferred from the input: the engine or propshaft, to the outputs: the driveshafts to the wheels, while also allowing the outputs to move independently of each other.

If both wheels always turned at the same speed the inside wheel would drag, or conversely the outside wheel would spin, during cornering, which affects the handling and comfort. The disadvantage of a conventional diff is that because the outputs have the ability to move independently of each other, the power tends to be transferred to the path of least resistance.

This means it is easy to spin one wheel under acceleration, ruining a cars acceleration and cornering ability. This is where limited slip diffs come in to play.

WHAT IS A LIMITED SLIP DIFF AND WHY DO I WANT ONE?
As mentioned previously, the weak point of a normal open differential is that it’s possible to spin one wheel. And if one wheel loses traction on an conventional open diff all the power heads to that output, meaning one wheel spins like mad while the other wheel has almost no power transferred to it at all.

This understandably is the last thing you want when accelerating in a straight line or around a corner. Predictably considering the name, a limited slip diff, or LSD, limits the amount of slip between the two outputs at certain times, meaning there is always at least some drive to both wheels. Having drive to both wheels increases traction, which in turn improves acceleration and handling.

The difference an LSD can make is huge, especially on a car with a tuned engine. It can be the difference between spinning the wheels in the first three gears and having full traction in all gears. And on the road, circuit, or drag strip, an LSD really can transform the car. We would say an aftermarket LSD is an essential purchase for any performance tuned car, so read on as we tell you about the various types on the market.

What different types of limited slip differential are there?

As mentioned, an open diff is what is fitted to most standard cars, particularly nonperformance models. And while it makes for a comfortable and easy drive, if one wheel loses traction then power will also be lost to the other wheel, totally losing you traction, which is a serious problem when maximum performance is what you want. This problem is magnified by increased power levels, and open diffs are the main reason the myth of FWD cars being useless with anything over 250bhp exists. To be honest, without an LSD any big power car can be pretty useless as all the power is wasted through one wheel.

This type of diff has recently become very well known in the tuning world thanks to Quaife’s ATB (Automatic Torque Biasing) diff, as fitted to the Focus RS and many tuned performance cars. Although it is best known in these cars, Torsen diffs are fitted to a number of cars, including most sporting RWD Toyotas from the ’90s to present day, the Honda S2000 and Integra Type-R, the S15 Silvia, most ‘90s Rover Turbos, and many more.

On the road this will rarely be an issue and therefore is often the diff type of choice for a fast road car, but when driving to the limits on track this can be a problem. The way Torsen ATB diffs work also makes them very poor for drifting, but for a fast road car, they are the best by far.

Although basic and not too road friendly, a car with a locked or welded diff, or with a spool fitted, has numerous performance uses. Welded diffs are often used by drifters and drag racers on a budget, as it basically removes the differential function and forces both outputs to turn at the same speed at all times by welding the diff gears together. This is good for traction and control, but overall handling can suffer, increasing understeer in normal driving and on RWD cars it also can increase oversteer when driving past the limits of traction.

The other disadvantage to forcing both outputs to constantly move at the same speed is the wheels shuffle and shudder when tuning corners at very low speeds. Most people consider a welded diff to be a poor handling option, but many race cars use something which has the same function, a spool. A spool replaces the diff internals entirely with a single solid unit that gives equal drive to both wheels at all times.

Although in theory this is a less than ideal situation, many top level competition cars have run spools over the years, including hugely successful cars from the likes of Cosworth, Porsche, Subaru, and many more. The advantages gained from them being simpler, lighter and stronger, far outweighs the small handling disadvantage when the car is set up correctly.

The majority of production vehicle LSDs are viscous units, and these control the slip via a viscous fluid in a sealed housing which makes it harder for one wheel to slip in a similar manor to walking through thick mud or quicksand. The outputs can move independently of each other, but not as easily as if in open air, and the faster you try to move through it, the harder it is to do so, or in this application, the less slip it allows.

The main disadvantages of viscous units are the majority of standard units allow a lot of slip, which may be good for a daily driver, but have less performance benefits in comparison to aftermarket diffs. The main problem, especially with an older car, is viscous units reduce in effectiveness with age and heat; many older cars’ viscous diffs are worn to a stage where they are barely more effective than an open diff. Although it is possible to make a performance version of a viscous diff, it is not ideal, and therefore much rarer.

This is the LSD of choice for all motorsport applications, as well as drift, drag, and trackday fans, but performance units are generally less user-friendly than Torsen units on the road. As with the other types of LSD, how much and how quickly they lock can be adjusted to suit the application, and some cars, BMWs in particular, come with plated LSDs as standard, albeit set to lock far less than an aftermarket plated LSD.

Plated LSDs work due to various friction plates limiting slip, much the same way a clutch works, and just like performance clutches, a heavily uprated plated LSD can be quite harsh in its operation, locking quickly and making the car juddery when driving slowly; as well as making the car more of a handful when accelerating hard due to its ability to immediately transmit the power with no slip. Just like a clutch, plated diffs can wear over time with hard use and big power, but most popular models can easily be rebuilt, and plated diffs remain the LSD of choice for seriously hard driven cars.

What are centre diffs?

Centre diffs are set to give a certain torque split front to rear, generally around 35-65 front to rear, which generally gives a car a good grip and balance without too much under or oversteer, but this does vary from car to car. Many modern four-wheel drive vehicles have adjustable centre diffs that are generally automatically ECU adjustable, and sometimes driver adjustable too. Adjustable centre diffs can usually change the torque split anywhere between 50/50 and 100% RWD, depending on what the ECU or the driver decides.

Most of you will have heard phrases such as, “1-way, 1.5-way, and 2-way” mentioned when people talk about diffs, and this is a basic explanation of how the limited slip diff is set to operate and therefore how the car will drive. A 1-way diff is set to lock on acceleration only; therefore both wheels are always driven when accelerating, but when decelerating the diff behaves like an open diff.

A 1.5-way diff locks on acceleration and also partially on deceleration, and is generally the most effective for track use and a good all-rounder. A 2-way diff locks both on acceleration and deceleration, and while this is favoured for drifting and often used in drag racing, some people find it too unforgiving for them in fast road and track use, inducing under and oversteer too easily.

Sometimes you hear people talk about a 3-way diff, this is just another word for a locked/welded/ spool diff, as mentioned earlier in the feature.

Just like changing your gearbox ratios or tyre size, changing the rear diff ratio can drastically affect your acceleration and top speed. Although for some cars, aftermarket alternate diff ratios are available, the most common way of doing this is by swapping it for a different one off another model in the range.

Automatic transmission or lesser power models are the most common place to find alternate ratio diffs for your car, and many large manufacturers, Nissan for example, have used the same style of diff for many years on countless cars, making the choice of ratios almost endless; providing you can find the one you want.

How do aftermarket limited slip differentials differ to oem ones?

The majority of road cars feature standard ‘open’ differentials. As mentioned earlier, these effectively allow the two driven wheels to rotate at different speeds. Simple and effective, open differentials are regularly chosen by OEMs for low cost and dependability.

Aftermarket LSDs are generally more complex and expensive to manufacture; however, are far more effective at distributing power and increasing traction and road holding. OEMs themselves regularly approach LSD manufacturers such as Quaife for their high-performance model lines.

Why, or when, would you need to upgrade your LSD?

We would recommend upgrading to an LSD for anyone keen on fast road driving or racing on a circuit. If you regularly experience a lack of traction, torque steer, understeer or oversteer, the fitment of an LSD will work to eliminate such unwanted characteristics.

What other mods should you consider when uprating your LSD?

We would recommend that a vehicle’s suspension geometry and tracking is checked to make sure everything is straight and true. It’s also recommended that tyres are checked to make sure there’s plenty of tread, the pressures are correct and there isn’t too much of an inconsistency between one driven wheel and the other. An LSD will likely highlight anything that’s not right.

Are there any downsides to uprated LSDs?

A quality LSD that is correctly fitted is unlikely to bring any real downside. As mentioned, make sure you are getting the right type of LSD to suit your vehicle’s intended use.

What causes differentials to fail or not be suitable for the task?

Factory open differentials can fail for a number of reasons. Increasing a car’s power or natural grip by changing tyre compound, tyre width or suspension geometry are just some factors that can lead to such a failure. A lot of people chase horsepower; however, cars can become undriveable as a vehicle’s standard setup isn’t designed for such high-power loadings. Plate differentials can fail in a similar way to standard open differentials due to their design. The ATB is inherently strong due to the design and the number of mating surfaces – companies like Quaife are so confident with the design of their ATB that they offer a lifetime warranty, even for motorsport use.