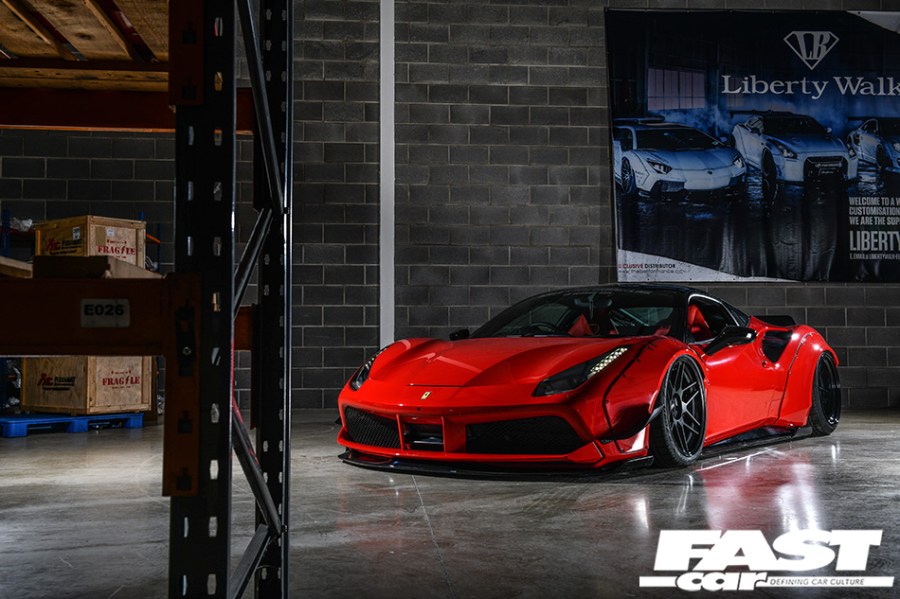 An important lesson for supercar posterity: stick the engine in the middle, it’s better. But that’s not the only schooling going on here – brace yourselves folks, because Liberty Walk are having a go at being smooth and subtle with Ferrari 488 GTB…

The notion of a mid-engined Ferrari is commonplace today – indeed, it’s more unusual to find Ferraris that have the motor at the front – but there was a time when this was not the case. Enzo Ferrari was famously against the idea, complaining that putting the engine behind the driver was like ‘putting the horse behind the cart’. His front-engined Formula One cars were doing fine in the 1950s (and it’s worth remembering that Enzo never really wanted to build and sell road cars anyway, they were just a necessary evil to pay for the firm’s racing endeavours), but in 1960 the 246P was tested in F1 – the firm’s first ever mid-engined racer, running a 2.4-litre Dino V6.

The first mid-engined Ferrari road cars – the Dino 206 and 246 GT – didn’t arrive until 1968, because again cantankerous old Enzo felt that the general public couldn’t be trusted to handle such a layout. But, as with the F1 cars, the engineers managed to change his mind, and victory ensued. 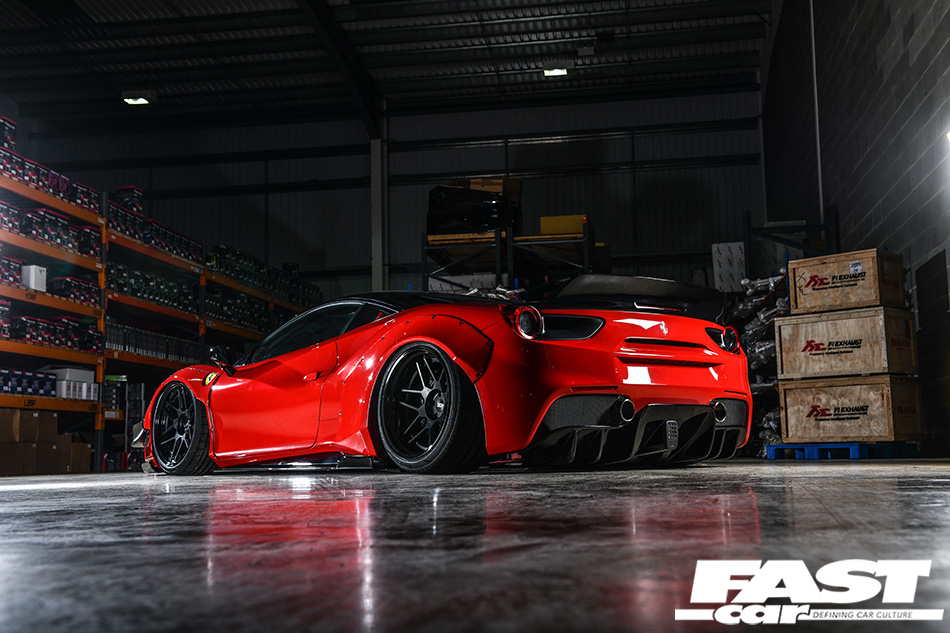 The car you see here, however, is no ordinary 488. Sure, the model’s a mighty thing in standard form – its 3.9-litre dry-sumped twin-turbo V8 produces 661bhp in factory spec, it’ll run 0-62mph in three seconds dead – but naturally this isn’t a factory-spec example. We’re not that sort of magazine.

So why the history lesson? Because this is one of the most mould-breaking Liberty Walk builds we’ve seen so far, that’s why, by virtue of the fact that it almost doesn’t look mould-breaking at all: with the notable absence of the usual stickers and graphics, the uninformed observer might be led to believe that this is how Ferrari themselves actually built it. Of course, you and we know better, but isn’t it intriguing to find an LB Works widebody road-racer that’s… subtle? Is it mad to use that word? 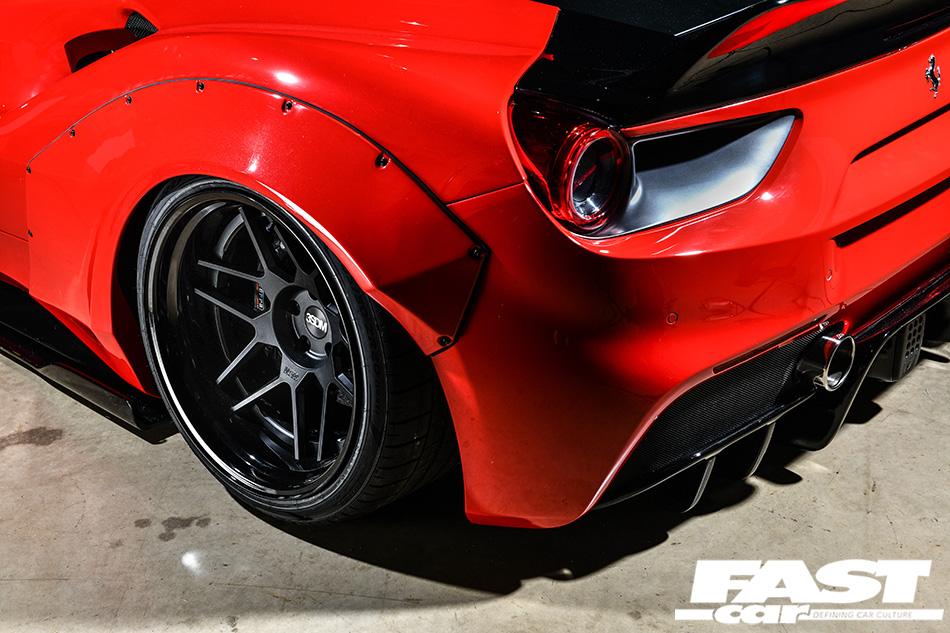 OK, perhaps not subtle as such, but it certainly exudes a class and maturity that you wouldn’t find in, say, a baby-pink Liberty Walk GT-R. So how did all this come about?

The man with the gen is James Pearman, Director of The Performance Company. Regular readers will remember him the deep-green LB Works Lamborghini Aventador that he was the puppetmaster above. This Ferrari is another customer build, masterminded by James and his team. “Our client had first seen the new Ferrari 488 unveiled at the Geneva Motor Show,” James explains. “He knew that he wanted one as soon as he saw it, so he arranged for a car to be sourced in the UK to be built by us before shipping to his home in Pakistan.”

Yes, you read that right – he wanted his car to be built by The Performance Company. Given that the car had already been built by Ferrari, this could only mean one thing: our mysterious Pakistani chum had no intention of rolling through his hometown in a bog-standard 488. Anyone can do that. (Well, anyone with a wallet thick enough to stun a whale.) No, he wanted something fresh and unique, and he knew that TPC were the guys for the job. This makes a lot of sense, because the Wellingborough-based outfit offer everything from vehicle sourcing to full bespoke project builds, working with clients to create a car to their own personal tastes – any spec is possible, whether it’s small-scale or full-custom. 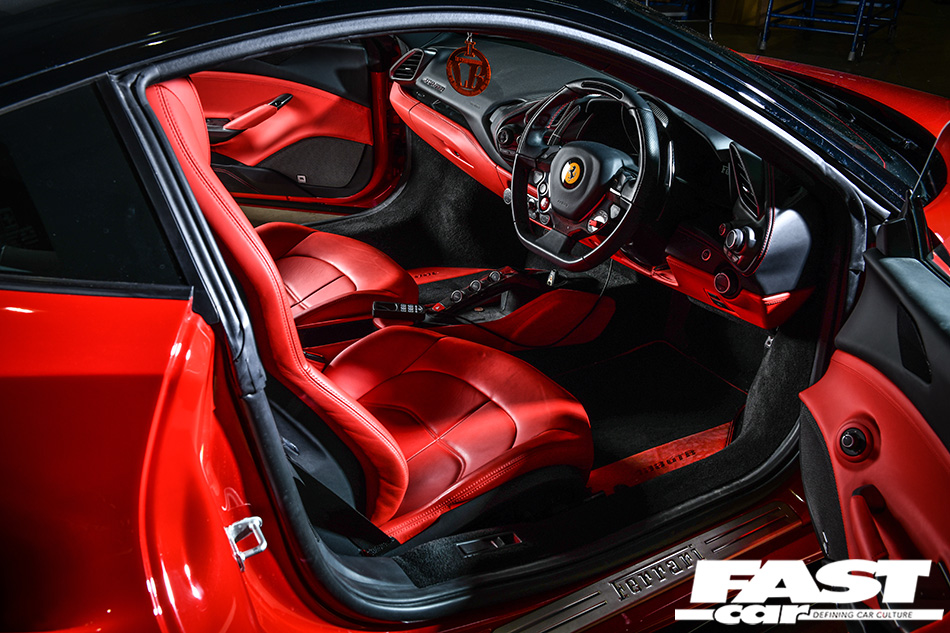 And, helpfully, they’re also the official face of Liberty Walk Europe, so this is no back-street chop-shop fitting kits they bought online, this is the real deal, sanctioned by Wataru Kato himself. As such, the team set about applying the aggressive LB Works widebody kit to this unsuspecting 488 with ninja force.

“It’s a 2016 model, which was sourced by Tom Hartley Cars with just 900 miles on the clock, and delivered direct to Liberty Walk Europe,” says James. “The build was fully completed by The Performance Company, with the bodywork and paint taken care of by Colourkraft – and, as yet, the owner hasn’t seen the car in person! But with constant discussions and photos being sent back and forth, we were able to build the 488 to his precise standards with full communication at all stages. The decision was made to match the Liberty Walk kit to the original Ferrari Rosso Corsa paint, with a number of contrasting accents finished in Beluga Black.” 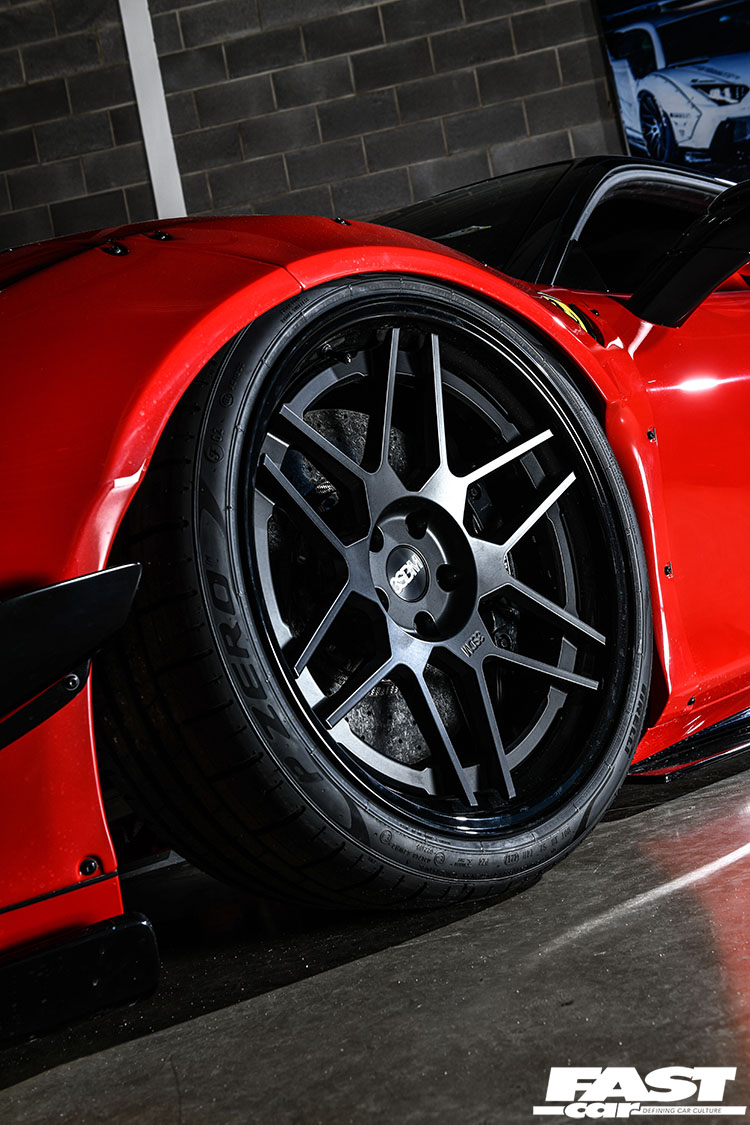 The power’s also been tweaked – because more is more – so the output has swelled from the factory 661bhp to a robust 725bhp; this was achieved by the addition of Pipercross air filters and a cat-back system from Fi Exhaust, along with mapping by Litchfield to ensure that the go truly matches the show. And there’s no point grafting on huge arches if they’re just going to be hanging in the upper atmosphere, so the suspension needed addressing too.

Thankfully The Performance Company are also official dealers for AirREX, and they know their way around a bespoke air-ride setup – yes, it’ll set you back around £7,500 including the front boot install, but if you’re living the sort of life that allows you to modify a new-era Ferrari, you’re presumably not overly concerned by such bills. That’s probably what you spent on lunch.

The future’s looking bright for this understated yet outrageous widebody bruiser. It debuted in its shiny new form at the Autosport International show at the Birmingham NEC, taking pride of place on the Liberty Walk Europe stand, and it entertainingly confused passers-by with its whimsical ability to be simultaneously completely outrageous and, somehow, the least imposing car on the stand. Who’d have thought LB Works could do OEM+? 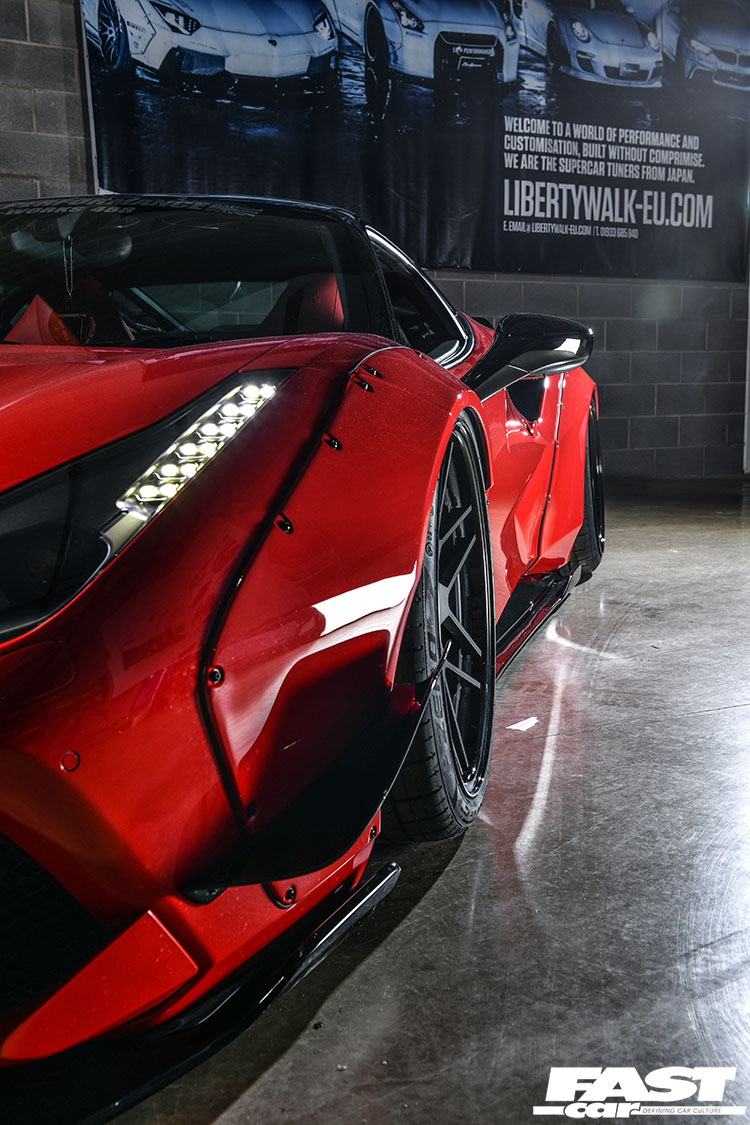 Perhaps OEM+++ is a more appropriate term, but it totally works for us and clearly does for all who see it too. It’s unusual to find a modified car that’s universally loved, but this is it (er, aside from the old-guard Ferrari purists, who scoff at air-ride and sneer at bodykits, but sod them), and now it’s ready to be boxed up in a container and shipped off to its new life in the Karachi sunshine.

Would Enzo Ferrari have approved of this car Liberty Walk kitted 488 GTB? Almost certainly not – the suspension would have annoyed him, and the colossal arch extensions would have made him shudder with horror. But then again, it’s a mid-engined Ferrari road car, and he wasn’t all that blown away by that idea either. Maybe the traditionalists don’t know everything. Maybe it’s good to learn a few new tricks.