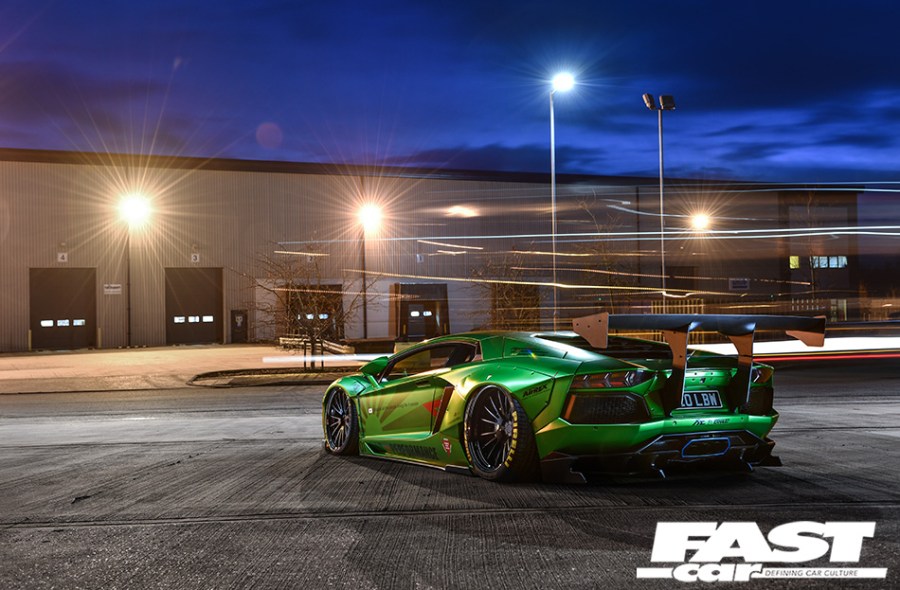 Taking the Lamborghini Aventador, one of the widest cars money can buy and making it wider is a pretty punchy move; but there’s more to this pumped-up Liberty Walk Lamborghini than just girth though…

The cult of the supercar is something that’s enchanted and beguiled petrolheads for generations. And there’s no manufacturer more deeply intertwined with the genre than Lamborghini; indeed, the term ‘supercar’ was actually invented for a Lamborghini. When the Miura arrived in 1966, people were astonished – in a world where cars were sensible and boxy and pedestrian, seeing a Miura was akin to witnessing a spaceship landing in the high street. No-one had ever seen a car that looked so outrageous before, and the performance was similarly otherworldly. OK, the Miura had a tendency to catch fire when the carbs spit fuel onto the hot manifolds, and the nose would lift at any speed over 100mph which meant you’d lose all steering ability, but that’s sort of the point of supercars: they’re not VW Golfs. They’re not sensible. They’re insane, wilfully silly, ludicrously fast, and slightly dangerous.

Lamborghini’s modern interpretation of Miura values is the Aventador – a car which took the vicious wedge-shape of the Murciélago, fused it with the fighter-jet aesthetic of the Reventón, and created something terrifying that spits blue flames on the over-run and is equally at home prowling around Knightsbridge or Monaco as it is v-maxing at Laguna Seca or dancing along the Stelvio Pass. 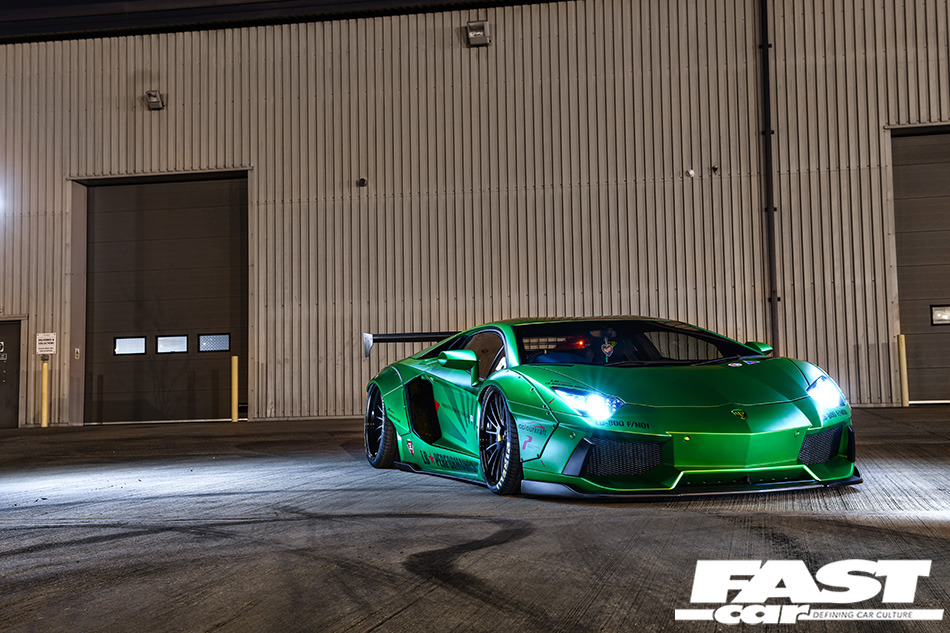 Supercars, above all, are a status symbol – and it goes without saying that the keenest way to present your credentials is to roll down the street in something that’s better than everyone else’s. Sure, an Aventador is outrageous, but anyone who has enough money is able to buy one. You just go into the showroom and slap your fat wad down on the counter. So how do you, as a moneyed international playperson, separate yourself from the crowd?

Liberty Walk, there’s your answer. The masters of cartoonish girth have firmly planted their flag in the supercar scene, and the advent of Liberty Walk Europe means that us Brits are now able to commission genuine LB Works builds and not have to go through the hassle of having it shipped over in a container. The Performance Company, based in Wellingborough, are the official agents for the unhinged Japanese outfit, and they can take on any commission. The LB Works Aventador you see before you here is a strong visualisation of their skills and vision. So how did it come about? 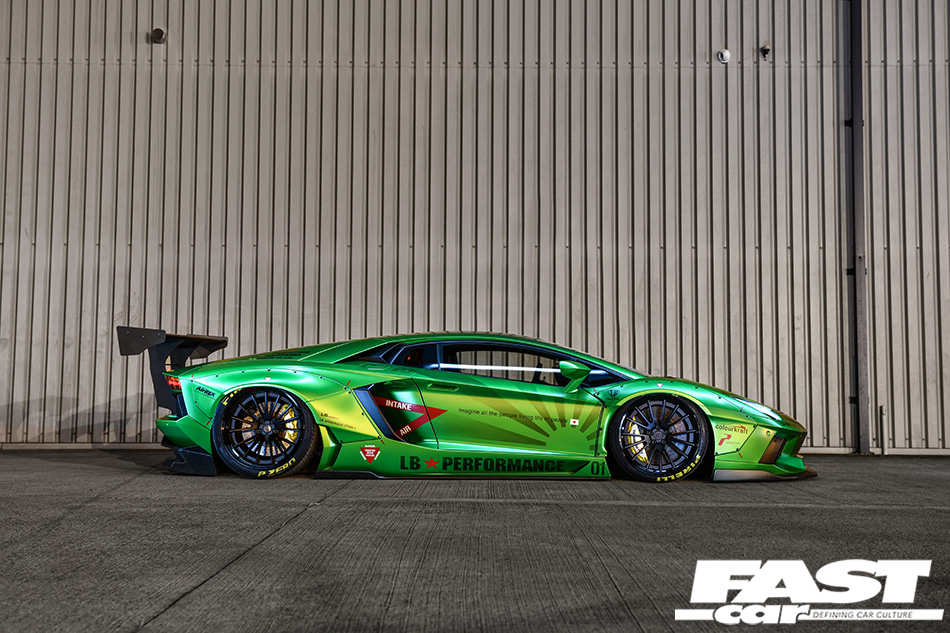 “The customer who commissioned this originally approached us because his son had been playing Need for Speed on the Xbox, and had built a Liberty Walk Aventador in the game,” explains James Pearman, Director of The Performance Company. “After seeing that, he googled Liberty Walk and he couldn’t believe that it was actually a road-going kit available to customers! So that was it, his mind was made up – he had to have one of these cars for himself.”

Of course, you don’t just walk into your local wide-arch specialist and pick up one of these mighty machines off the rack. Having done his research, this eager customer sat down with James and his team and mapped out specifically what he wanted this ride to be like. After all, no two LB cars are the same. 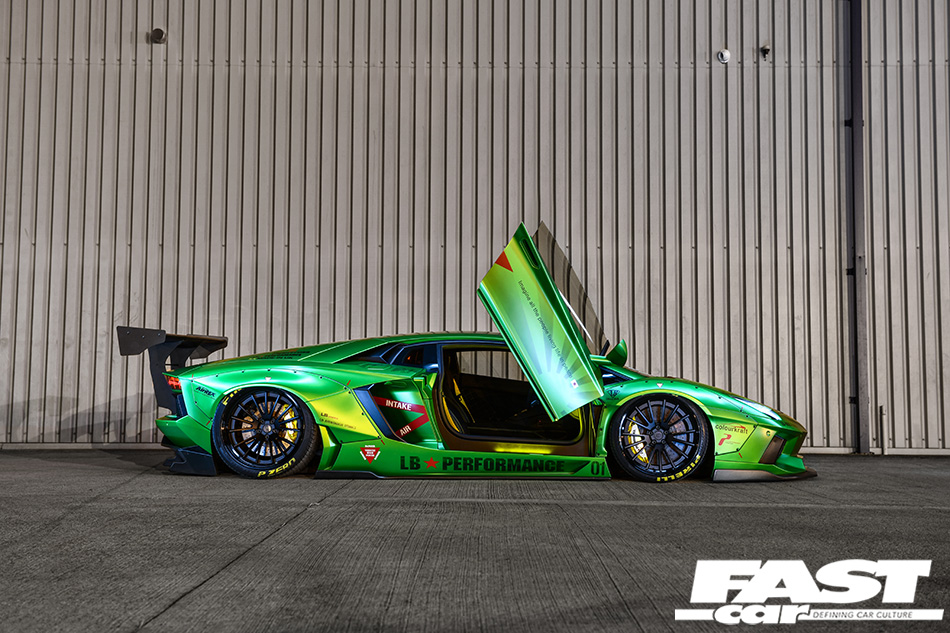 The car itself was sourced from Lamborghini Edinburgh – a 2012 model in Verde Ithaca paint, which is a searing shade of lime green that’s almost luminous. As you can see, however, that colour didn’t stick around for long…

“The car was delivered to us as a totally stock, well-specced Aventador,” says James. “Sam from Lamborghini Edinburgh was a great help; we often work with him to source cars for us so we knew this would be the perfect base for the project.” And with the right donor in place, it was time to fulfil the customer’s rather detailed brief.

Job one, naturally, was to crack on with the body makeover. And this was no small undertaking. The CFRP LB Works kit comprises brutally wide wings, side diffusers, fresh front bumper, V2 front and rear diffusers, and the towering V2 GT rear wing which totally dominates the tail end. Well, until those blue flames start licking out of the exhaust! The lurid green has been replaced with an altogether classier shade, in the form of Green Hell Magno paint, which would usually be found on the Mercedes-AMG GT. And those custom graphics? They’re airbrushed on. This is no wrap, this is old-school craftsmanship. 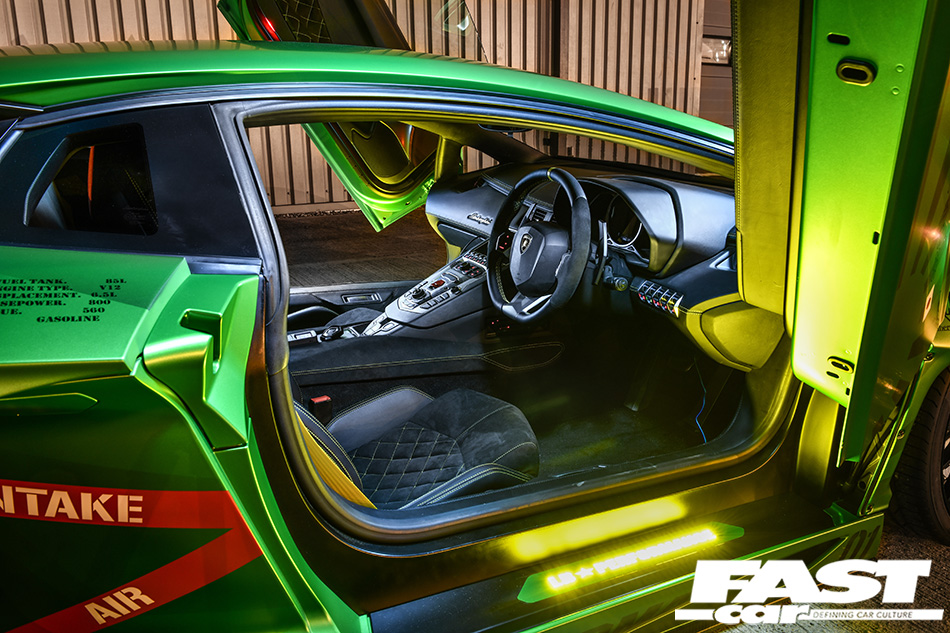 You can’t throw that sort of effort at the exterior and leave the interior standard, so the Lambo’s innards have been comprehensively reworked too. We’re looking at seats, dash, console and headlining all trimmed in a mix of black nappa leather and Alcantara, with yellow diamond-stitching and LB logos, to ensure that the provenance of the build is in no doubt. The car was stripped down to a tub to achieve all of this, and has been built back up to incredibly fastidious standards.

The power of a stock Aventador is breathtaking, but that would never have been sufficient for this ostentatious build, so James and his team have addressed that too: the 6.5-litre V12 has now been cranked up to the 800bhp mark, and its real party piece is the £13k exhaust system. Built by Fi Exhaust, it’s a valvetronic ‘Volcano Firetador’ effort with decats; if you thought the factory Aventador was an effective flame-thrower, you should see this green monster doing its thing! It’s genuinely impressive, you could barbecue sausages behind that vast tailpipe. (Although they’d probably taste pretty revolting, we wouldn’t recommend it.) There were countless other detail changes too; the brake calipers were shaved to fit inside those unique 3SDM splits (the rear wheels measuring a whopping 13×21”!), the door sills are now backlit Liberty Walk items, there’s a custom CNC-machined LB badge replacing the Lamborghini original, and the car’s even been signed on the fuel filler by Mr Liberty Walk himself, Wataru Kato. 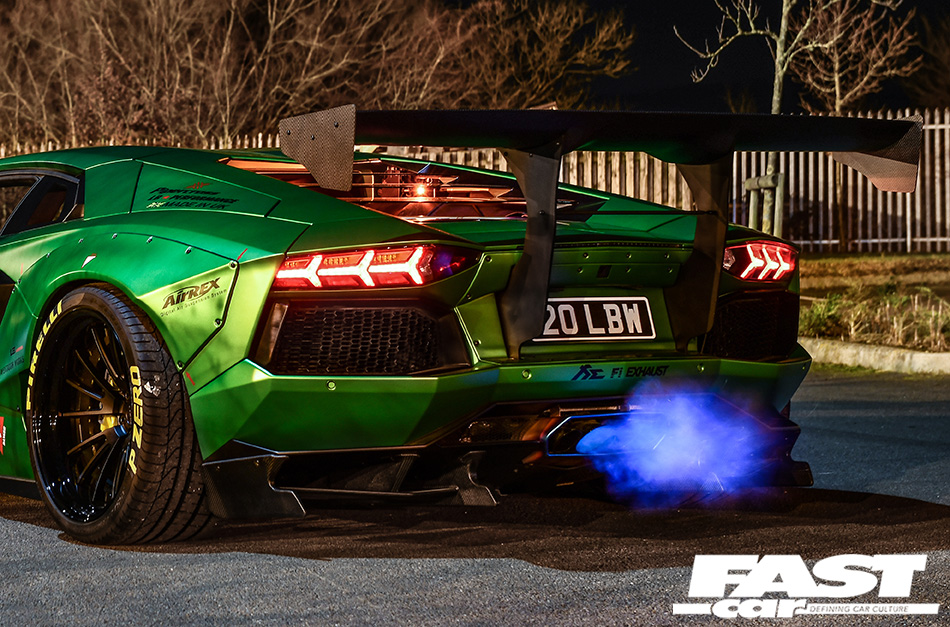 “The build took three months to complete,” says James. “Every single element had to be fastidiously checked and perfected, we used eleven litres of paint, we went all-in.” And it shows – this car has incredible presence. You hear it long before you see it, and when you do see it… well, you can’t quite believe your eyes. It’s like being a peasant farmer in rural Italy in 1966, seeing a Miura rumbling through the village and wondering if aliens were attacking.

“This is one of a couple of Lamborghinis that our customer owns,” James explains, “and he’ll be shipping it to Italy for a summer tour. Liberty Walk Europe will also be displaying it at a variety of shows across the continent.” Something to look out for, then. And what about TPC’s plans, are the punters clamouring for LB Works builds right now?

“Sure, you’re going to be seeing this car at a load of events, and we built it alongside a Ferrari 488, a McLaren 650S, and a couple of Nissan GT-Rs – so we have been busy,” James laughs. “The reactions to this car are like no other car I have ever driven, it’s a jaw-dropper even when it’s at a standstill. And when those five-foot flames appear, it’s just something else…”

This is the new wave of the cult of the supercar. Manufacturers still have what it takes to astonish, but if you want true shock-and-awe, Liberty Walk’s where it’s at. 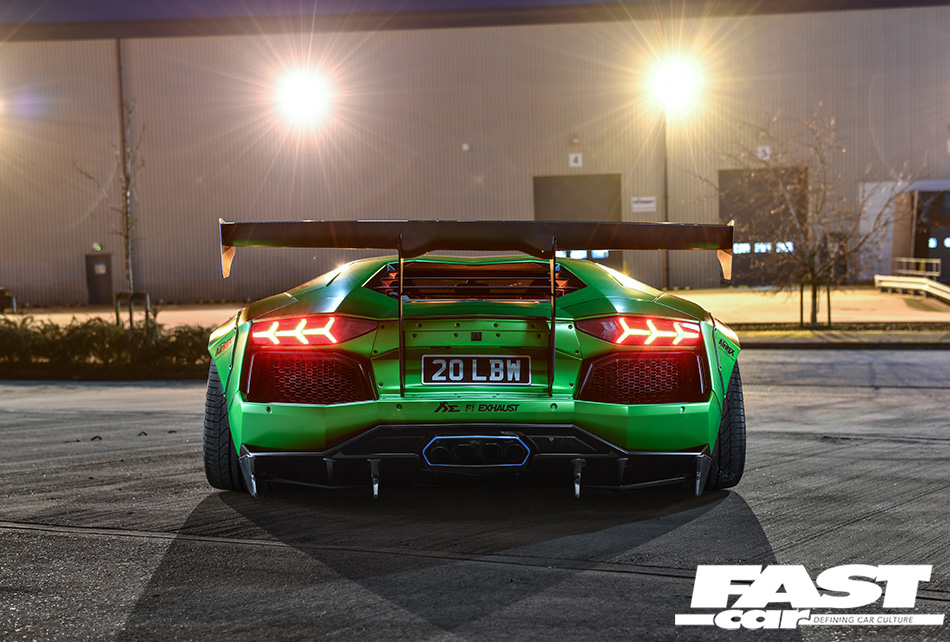 Who, what, and how much? Liberty Walk Lamborghini Aventador

This LB Works Aventador is an official Liberty Walk Europe car, project-managed by LB-approved The Performance Company (TPC) in Wellingborough. TPC offer everything from vehicle sourcing to full bespoke project builds, working with clients to create a car to their own personal tastes – any spec is possible, whether it’s small-scale or full-custom.

So what if you want TPC to build you a genuine Liberty Walk Aventador, how much is that going to cost you? Well, first of all you’ll have to buy an Aventador. (Or TPC can find one for you!) Then you’ll be looking at around £34,000 for the full body makeover, plus an additional cost for the colour change which will depend on how extreme you want to go. This car’s tuned up to 800bhp, and tuning options start at around £1500. The shouty valvetronic exhaust weighs in at a little over £13,000. Interior retrim options and wheel/tyre options will depend on your preferences. And the top-flight AirREX suspension with the front boot install? That’ll be around £7,500.

These are big numbers, but it’s a big car – you get what you pay for, and this is the price of being a world-class baller!