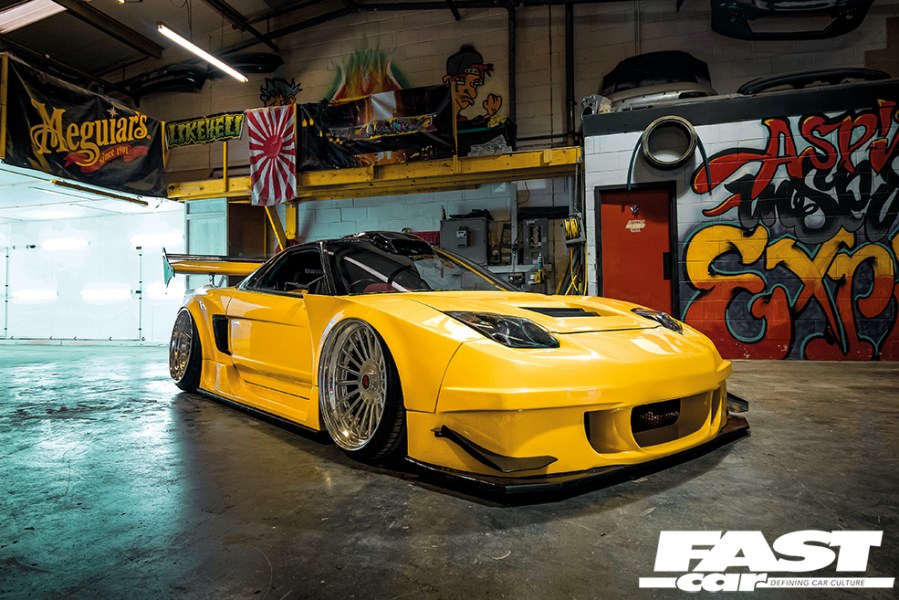 You all know the reputation the NSX has – it’s a rare beast, and requires a tuner with serious chutzpah to take it on. And with a colourful background in Honda modding, Shaun Quinn was just the man for making the ultimate modified Honda NSX.

Reputations are made or broken on rumours and hearsay. This is truer today than it’s ever been, in the era of immediate social media smack-downs and speak-before-you-think scatter gun opinion showers. But sometimes, just sometimes, the rumours are true. And the Honda NSX is one of those rare examples where you can believe the hype. Yes, it genuinely did annoy Ferrari when it was launched, because the world suddenly saw that it was possible to have supercar performance in a reliable daily-driver package, meaning that the old-guard Italians would have to try a bit harder. Yes, Ayrton Senna was involved in the development of the Honda NSX, and yes, Gordon Murray, Eddie Jordan, Tom Cruise, Alex Zanardi, Scottie Pippen and Chuck Yeager all owned NSXs. They’re that good. Believe what you’ve heard. 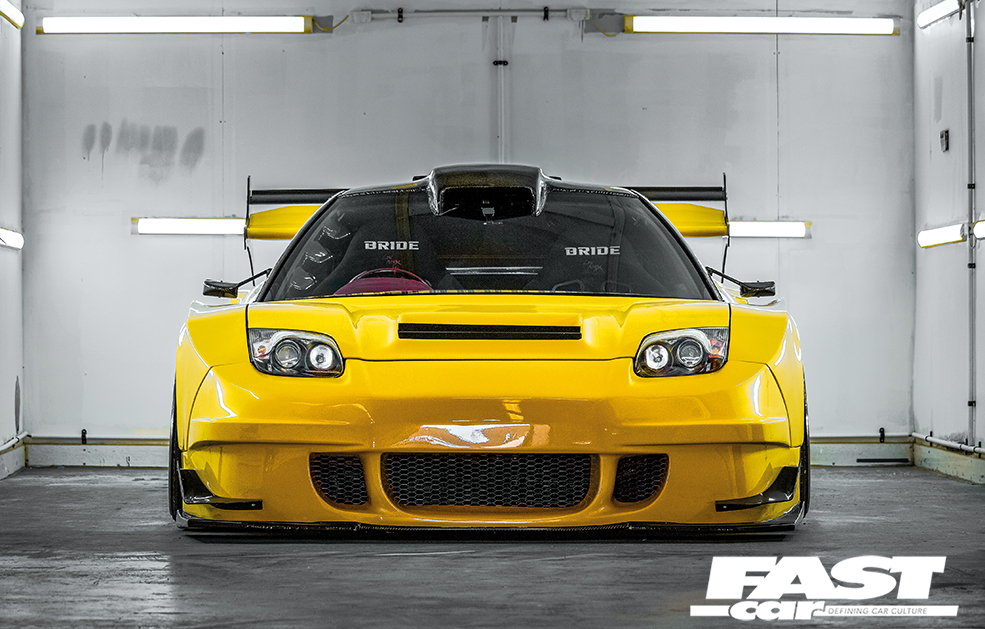 It’s no surprise that these fabulous mid-engined sports cars have passed into the pantheon of modern legend. When the Honda NSX was unveiled at the 1989 Chicago Auto Show, it was met with genuine confusion: a supposed supercar with a Honda badge? Just what were these Japanese upstarts up to, exactly? But Honda was deadly serious – the NSX may have shared a badge with your mum’s Civic, but it had a few tricks up its exquisitely tailored sleeve. The all-aluminium quad-cam VTEC V6 mounted behind the seats produced an urgent 270bhp at 7,300rpm, which was more than enough to overwhelm the rear tyres in an aluminium silhouette weighing just 1,340kg wet. The chassis was specifically designed to offer a sublime duality for the driver: supercar tactility with Civic-esque ease of use, making a hero of the average Joe. Unfortunately for Honda, cachet is a significant element in the supercar matrix and they were never likely to coax too many people from Ferrari showrooms, no matter how capable the offering; in a surprisingly lengthy sixteen-year production run, fewer than 20,000 examples were sold. But today people have started to realise that the NSX is far superior to its contemporary supercar rivals – while the likes of the Ferrari 348 are all piddling oil in their heated garages, NSXs are still usable daily drivers.

Let’s not pretend that the modified Honda NSX we’ve got in front of the camera today is totally sensible, though. Honda’s formula has always stirred a little lunacy into the scientific ingredients, and Shaun Quinn’s approach here has been to amplify the lunatic side rather than focusing on such trivialities as day-to-day practicality or mpg figures. That stuff’s all baked into a Honda anyway, so why not go a bit nuts with it? 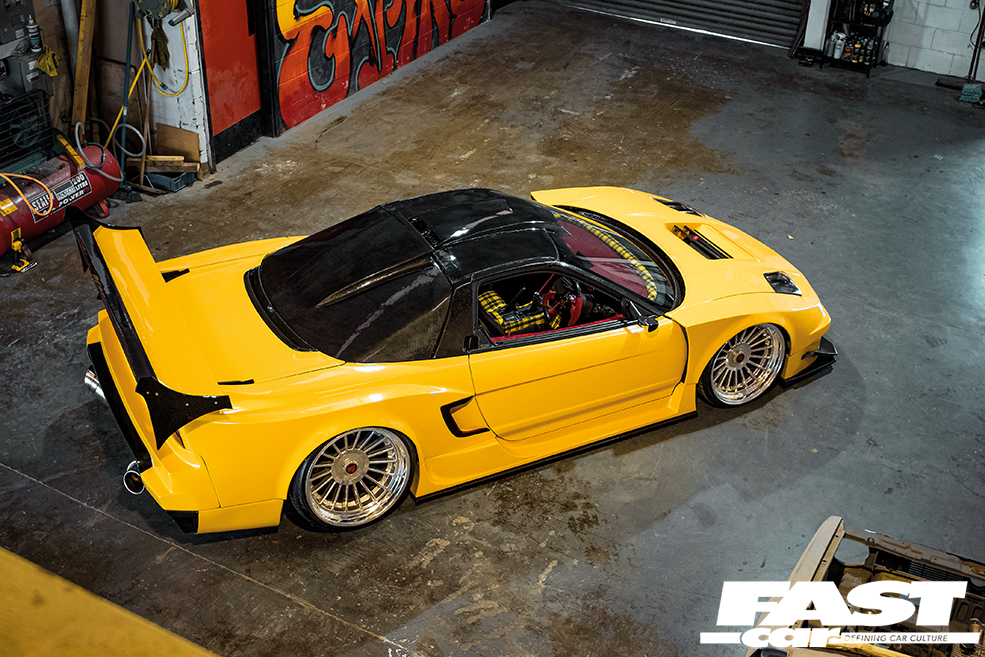 It’s worth pointing out here that Shaun’s got form with this sort of thing. Regular readers may be familiar with his EK Civic, a car so beautifully crafted and keen to evolve that it’s had no less than four features in the mag over the years. And that says a lot about how he operates, because getting two features out of one car is pretty much unheard of. Four never happens. Cast your mind back to 2016, and we see a ninja-purple EK with S2000 styling, a built H22 motor, staggered OZ Futuras and carbon Bride recliners; fast-forward to its latest feature and the Civic is bright AMG green with custom wide arches, an almighty carbon wing and unique double-stepped SSR wheels. The evidence is abundant that when this dude gets his hands on a Honda, things are getting hectic. And with the NSX, he wasn’t going to deviate from this deviant behaviour.

“The Civic was my first car, and I guess most people know me for that one,” says Shaun. “I’ve been modifying the EK for fourteen years now; it’s been to shows all over the UK, and the latest reincarnation of it was to be its last, simply because I don’t see how it could get any better.” Fair enough, but it’s quite a step up from a hatchback to a supercar, isn’t it? How on earth did the NSX plan come about? 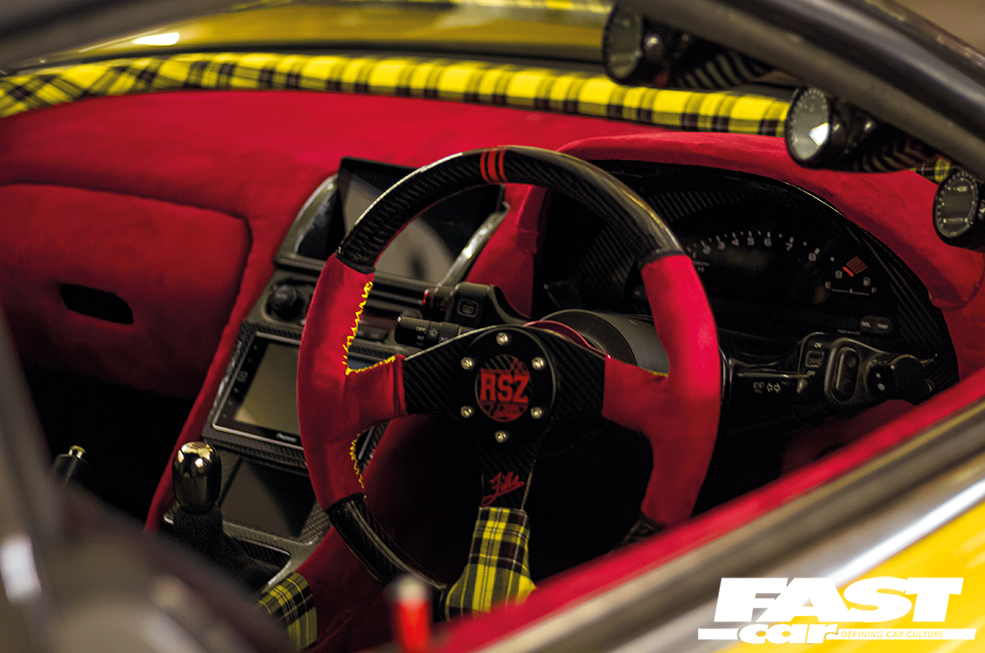 “Well, ever since I was a wee guy, the NSX was my poster car, I just always thought it was a mega looking supercar,” he smiles, “and the fact that I’ve always loved Hondas means that it ticked all of my boxes. So at this point I found myself looking at NSXs constantly, daydreaming of owning one and planning all the things I’d do to it if I was ever lucky enough to get one of my own. But the more I looked, the more I realised it was becoming an unreachable dream, as the prices were getting ridiculous. I began to look at smashed ones, but even then they were very pricey… so, slightly disheartened, I started to give up on my dream.” Thankfully, before our hero’s head began to hang too low, fate extended an olive branch.

“A few weeks later, I was chatting to my best mate Baz at work and he said ‘so, what did you think of that NSX I sent you?’,” Shaun recalls. “Unbeknownst to him, he hadn’t actually sent me anything, so then he was frantically trying to get the ad up on his phone to show me… and there it was: my NSX. I knew I had to have it as soon as I saw it. After a few phone calls to the seller later that night, a plan was made to take a trip to Newcastle to see it as soon as I could.” 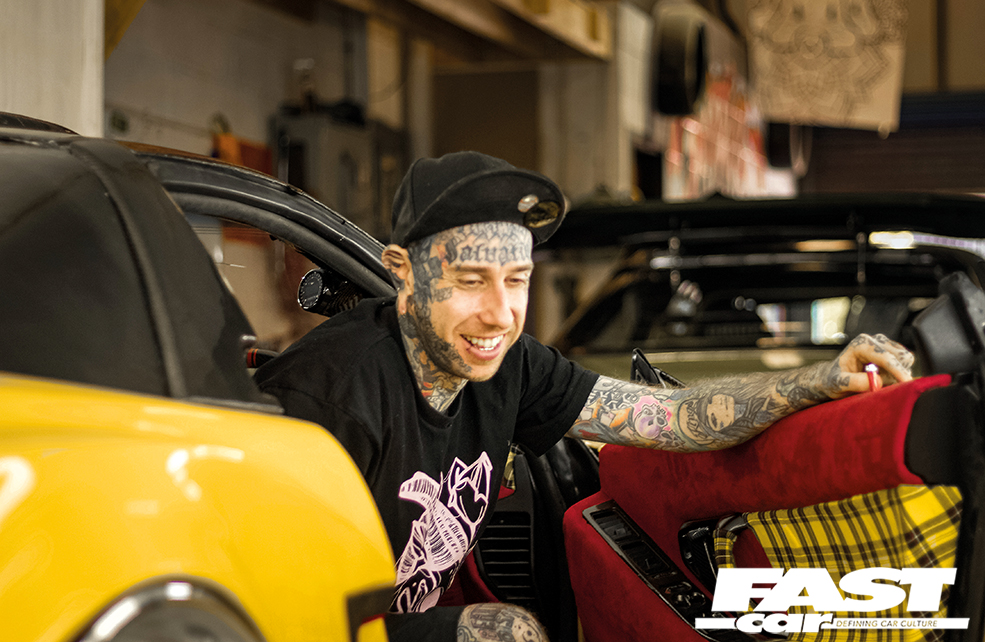 The car had been imported from Japan back in 2014, and it was already wearing a few modifications when it made its journey across the globe. It was a bit rough and ready, with some bodywork damage, faded paint, missing interior trim and so on, but none of that mattered. Firstly, it was at a price that Shaun could afford; secondly, he was planning to replace and upgrade all of that stuff anyway; thirdly, and most importantly, it was a goddamn NSX. The dream was coming true!

“I drove the car home, then went out for a blast to go show my mates,” he says. “The NSX got a wee trip the following week into work to show the lads, then it was time to get my teeth into it. We bagged the car the following week, then started to strip it – full body strip-down, full interior strip-out. Time to make this my car…” 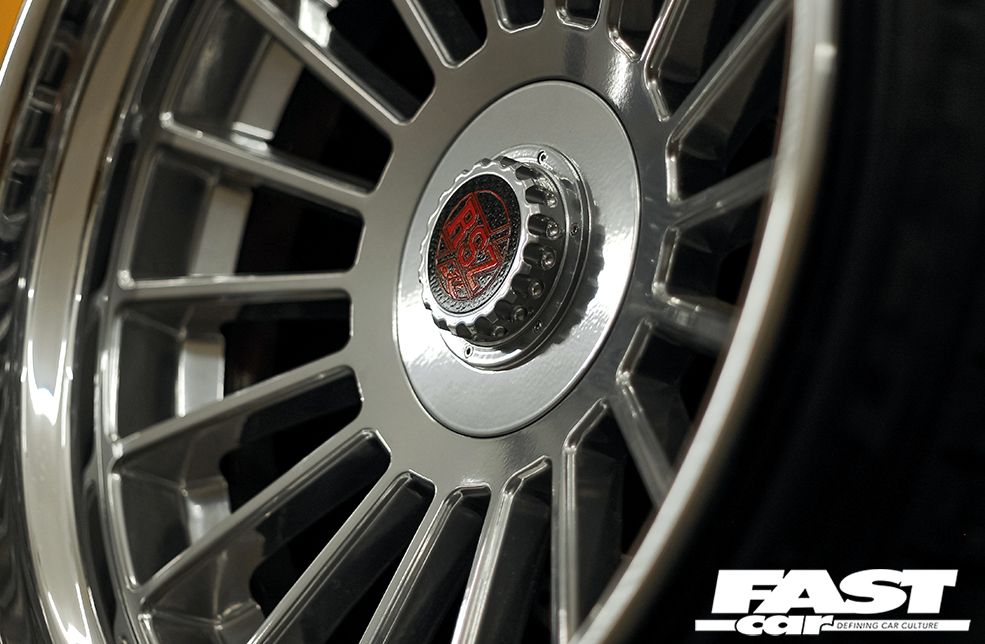 The air-ride is a real statement of intent here, although the purists can suck it up as this was hardly a concours example to begin with. Originally red, it had been repainted white in Japan, along with having various parts swapped out – in essence, it was always the car’s destiny to be turned into something unusual, and what better artisan than Shaun to help it fulfil its potential?

“All the work was carried out by myself and a few good mates,” he assures us. “I’ve always wanted to paint my own car, as I helped out with the Civic’s last three paint jobs, working weekends in a bodyshop to learn the skills. And I thought now was the time to do it; I’d decided on the way home from collecting the NSX that it was going yellow – Lexus Naples Yellow Pearl, to be exact – so maybe it wasn’t the best decision to learn to paint on a super-rare car… but everything can be fixed if I fuck it up! And being a bit mental I thought ‘well, let’s just do a three-stage pearl paint job for my first time’.” 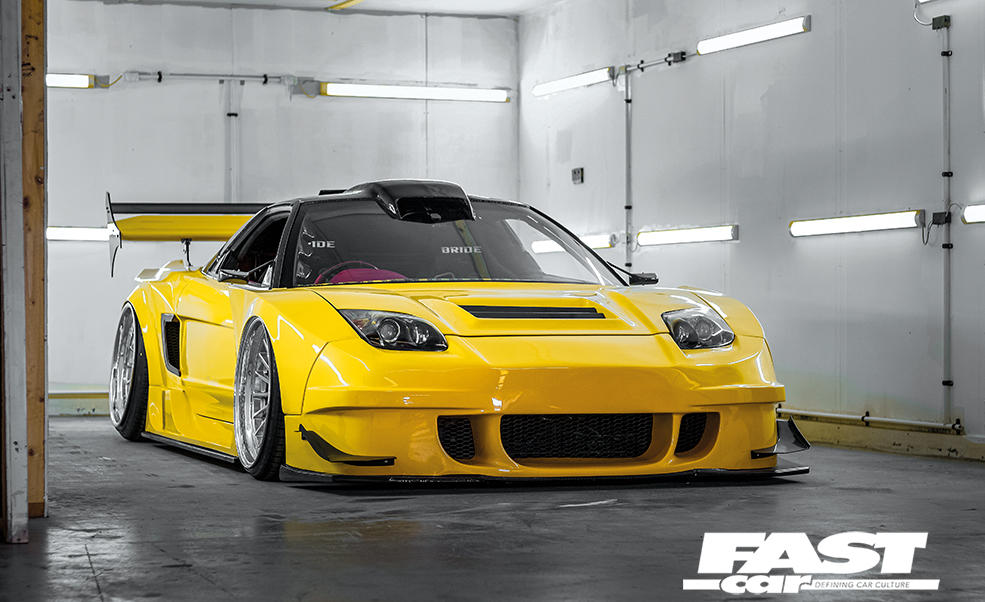 You’ve got to admire the confidence, and it’s clear that when this fella puts his mind to something, he’s damn sure going to succeed. This is just as well, as you can’t really pick a harder base car to start with for a modding project than an NSX. It’s not as if aftermarket parts are available on the shelf in your local Halfords. Pretty much everything on this build has had to be either custom-made or severely modified. The Zero Force carbon widebody is a savage bit of kit, and this has been heavily reworked by Shaun and his mates to give it some brutal custom flares. There are custom carbon bits everywhere, and you can see by the fitment of all the body upgrades, as well as the quality of that flawless pearl paint, that nothing has been done by halves here. The rear hatch, the roof scoop, the exhaust system, these are all custom pieces, all one-offs, and perhaps the wheels sum up the over-arching approach best: Shaun started with a set of staggered-diameter one-piece cast wheels, 8×18-inch at the front and 10×19-inch at the rear – these were then redesigned, cut apart, machined and rebuilt to turn them into unique three-piece split rims, measuring 9.5×20 at the front and 11.5×21 out back.

“There’s no rule book, no how-to guides for this sort of thing,” he says. “I just do it all with a ‘f*** it, let’s try it’ attitude. NSX parts are very hard to come by and very pricey, so most things on the car are custom; again, it’s all carried out in-house by myself and a few mates. This is definitely the only NSX running these kind of specs!”

He’s not kidding. You’ve never seen a modified Honda NSX like this before; Honda’s supercar earned its reputation on merit, and the same can be said for Shaun Quinn’s custom skills. Believe the hype. 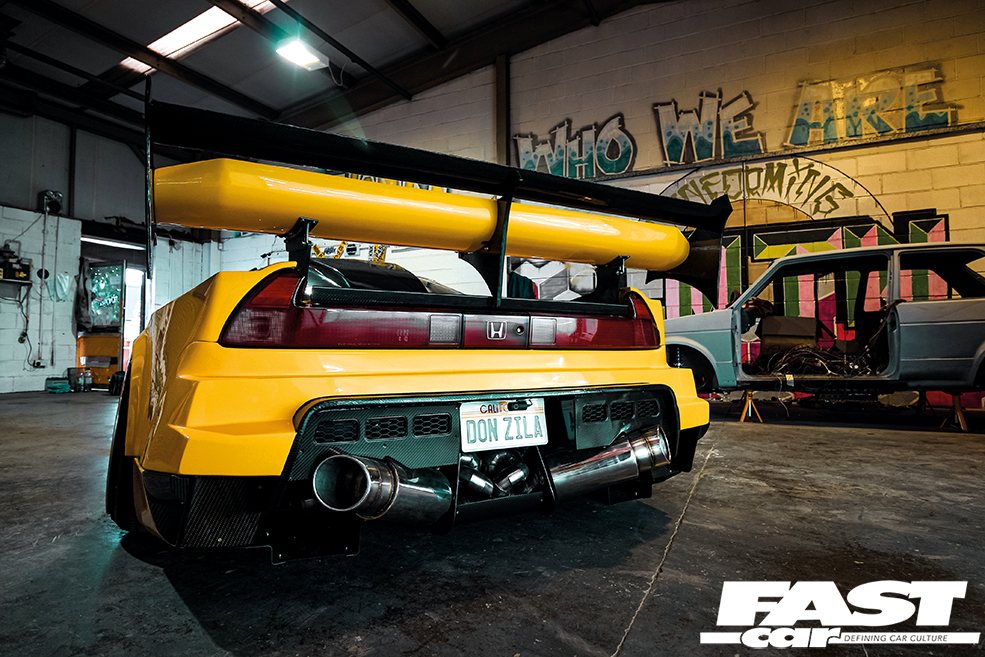