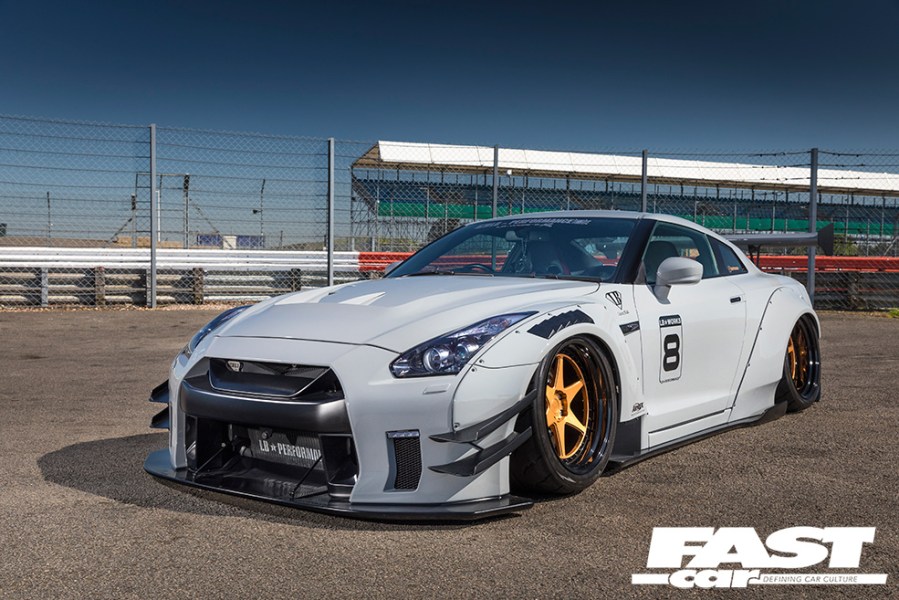 Such was the success of the R32-platform GT-R that very little of the winning formula changed when it came to the car’s two equally-as-celebrated succeeding generations: the R33 and the R34. You need to fast-forward a whopping 20 years after the R32 was initially unveiled, in fact, to witness the next big changes in the Skyline’s history.

Of course, we’re talking about the R35 GT-R – a car which shook up the recipe to such an extent that it officially dropped the ‘Skyline’ name altogether, whilst retaining several iconic features of the car such as those twin-circular rear lights and a savagely tuneable turbocharged engine that confirmed the GT-R wasn’t softening up one bit in its old age.

With its trail-blazing tech such as that dual-clutch transmission, launch control and cutting-edge infotainment system taken directly from the Gran Turismo computer game franchise, the R35 was a fitting way to bring the GT-R badge all-guns-blazing into the 21st century. We’ve tracked down one of the most extremely modified examples the country has to offer right now to see how both the car and tuning styles have changed in the 30-years leading up to this point.

Say hello, then, to The Performance Company’s rather savage example of this super-coupé that, a car that combines effortless power with a beautifully sculpted body in a way only the GT-R could possibly manage.

You might’ve seen this Wellingborough-based parts distributor mentioned on these very pages before; the firm a providing a crucial link to suppliers across the country and representing some of the biggest tuning brands on the planet. But they’re arguably known for distributing one very bang-on-trend Japanese brand in particular…

“We’re the exclusive European dealer for Liberty Walk body kits,” company director James Pearman reveals. “You might already be familiar with our previous kitted-out projects such as the MINI and supercharged Mustang.” Singlehandedly helping to make these painfully cool JDM wide-arch kits more available across the continent, The Performance Company recently thought it was time to up their game a notch when it came to demo cars…

Soon deciding that applying the Liberty Walk treatment to R35 GT-R would guarantee the company optimum exposure, James soon set about looking for a decent base car to get the project started with. But a bog-standard example just wasn’t going to cut it here… “We sourced the car from Litchfield,” James continues, heading straight to the Gloucestershire-based experts that are known as one of the finest GT-R tuners in the land. “They showed us this tuned car they had in stock that they’d tuned up for an old customer.” Needless to say, then, it was far from standard.

Sporting the company’s ‘Stage 4.5’ upgrade kit, the car boasts a whopping 700bhp on pump gas thanks to a string of premium upgrades performed in-house by the team. It all revolves around a set of Litchfield’s own turbochargers that offer up much more boost, teamed with improved wastegate actuators from Garrett. There’s also a re-worked fuelling system featuring two beefy pumps and monstrous 1100cc injectors, while breathing aids come in the form of a Litchfield large-bore intake kit and sumptuous Milltek exhaust system. Tied into an ECU refresh that boasts RACEROM switchable maps and Ecutek-coded boost control, it’s little wonder the car is so effortlessly kicking out such stratospheric numbers now.

“Performance is excellent,” James modestly says, explaining how the car’s massive power is matched by its impressive computer-assisted traction to offer up unrivalled levels of acceleration. But of course, this wasn’t the only reason he’d snapped up a GT-R. Soon back at The Performance Company’s HQ, it promptly went under the scalpel to receive the latest ‘Type II’ wide-arch body kit from Liberty Walk’s ‘LB Works’ line – sporting those signature riveted-on arches, as well as new bumpers, diffusers, that huge rear wing and heavily vented bonnet – completely transforming the car’s entire aesthetic in one fell swoop.

But a wide-arched car would never be complete without a significant body drop, with The Performance Company soon utilising the help of one of its other loyal clients – AirREX – to offer up a trick adjustable air suspension system that would allow the car to be dumped to the floor in a moment’s notice. It’s topped off with a set of 3SDM’s latest line of premium split rims (that are a ridiculously girthy 12 inches wide on the rear): some of the only hoops in the country capable of filling up the car’s new-found dimensions.

Looking nothing short of a fighter jet with its military-esque Audi Nardo Grey paint job, James’ R35 shows us the bleeding edge of what can be done to a GT-R in this day and age. Insane!

THANKS
Dave & Tim at Colourkraft for the paint; Sarah at Toyo Tyres UK; Ky at 3SDM; EBC Brakes; Toshi-san and Kato-San at Liberty Walk; Iain and Neil at Litchfield; Tommy and Dale at Meguiar’s and finally Dizzy at AirREX.