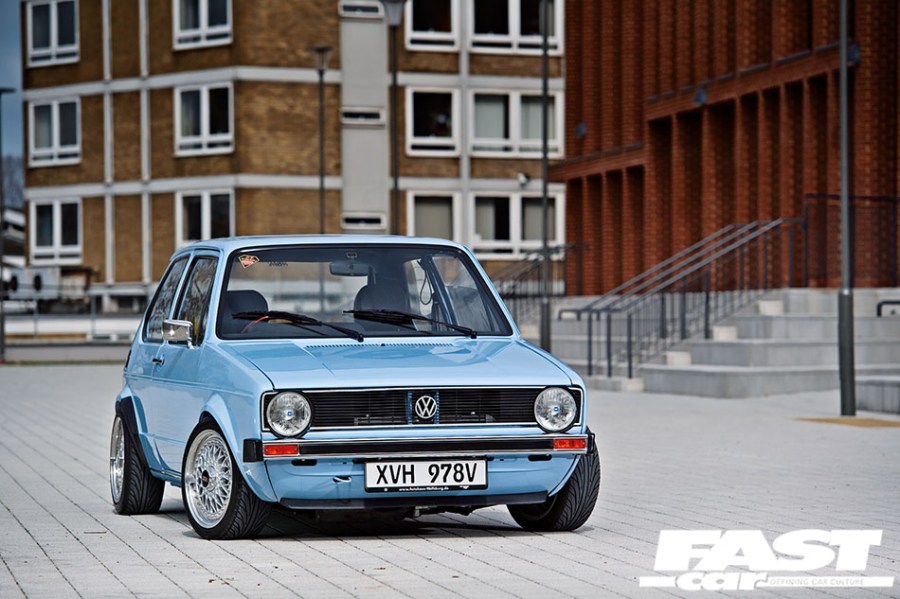 Whilst the owner of this tuned VW Golf Mk1 makes a living out of new technology, he clearly gets his kicks from a more traditional source. Log on and compute the vibe with us…

Thirty-nine-year-old Jon Carter is an IT Operations Manager that hails from Rochester in the ‘garden of England’, Kent. Whilst some tech guys follow a ground-breaking route in all aspects of their life, as you can see, we’re not here to wax lyrical about the latest Tesla. Thankfully Jon is one of us and firmly an old school guy: “It’s the simplicity of the early stuff that I really like. It definitely has a charm.  As a kid, I loved the Herbie films and later in life, our wedding car was a 1968 VW beetle! For me, the series 1 VW Golf Mk1 represents the start of the hot hatch era and is an icon”. 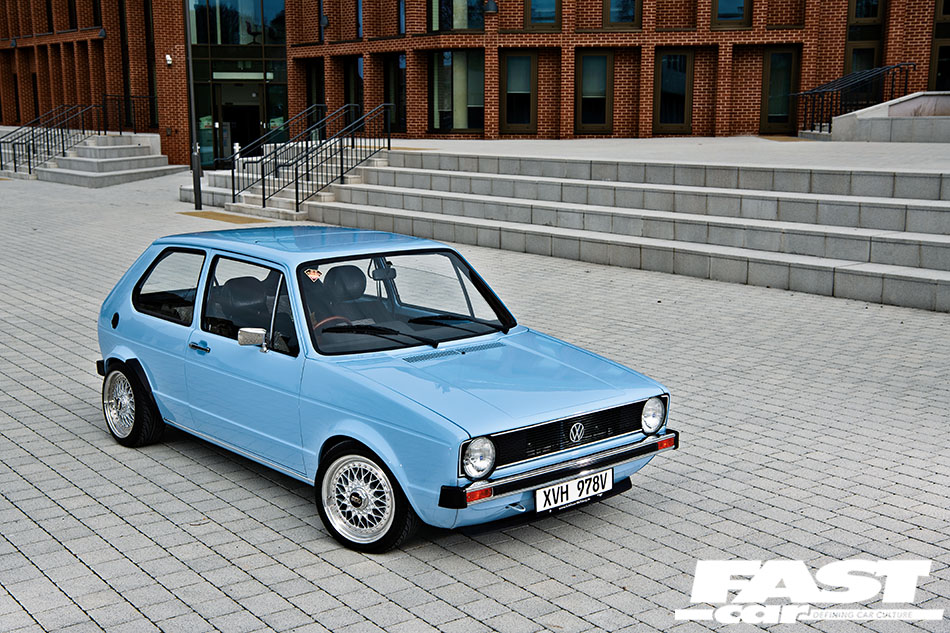 Jon has an interesting car history which is mainly Wolfsburg flavoured. His first car was another series 1 Mk1 Golf. Whilst he would have loved a Golf GTI, the 1.3 Driver was a little more insurance friendly although he recalls that his premium was still twice that of the £700 price tag of the car: “It was at the height of the max power era. I bought a partially modified one from a local lad which I had known and seen around. I just loved Mk1 Golfs and wanted something different to the Vauxhall Novas, Ford Escorts, Fiestas and Citroen Saxos that everyone else seemed to have at the time. I went on to own that car for around 7 years and substantially modified it over that time which was in keeping with that era”. This VW Golf Mk1 was textbook Brit look ticking all the period boxes with its clipper kit, smoothed tailgate and door handles, Bonrath single wiper conversion, Azev As, Koni top adjustable suspension and full retrim in leather and grey Alcantara including the Corrado rear bench conversion. Two 15” Kicker subs and a bright yellow respray ensured that you could see as well as hear it coming. This first Mk1 cemented Jon’s love for the scene: “I used to go to GTI international each year at TRL, Bracknell. It was always a great event with good people”. 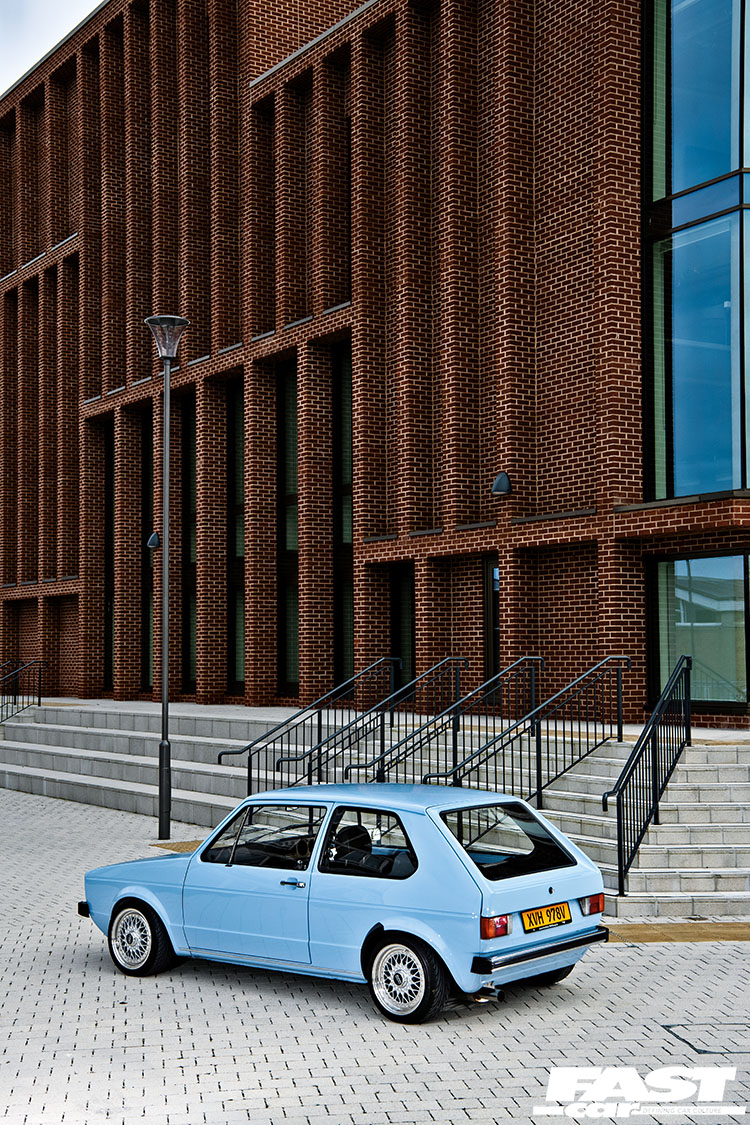 A familiar story for many of us, the pride and joy made way for a deposit on Jon’s first property. A brace of VW company cars followed including a Mk5 Golf and Passat Sport. Jon’s wife has also been loyal to the cause, previously owning a Mk3 Polo and Beetle. With a young family, current daily duties are undertaken by a Mk2 Tiguan, whilst a VW Up! takes care of frugal commuting.

“I wanted another MK1 Golf series 1. I had been looking online for a while and this one came up, it sold on eBay and I had missed out on it but around a week or so later it reappeared. I did a bit of research on it, trawling the forums and it was previously featured in Golf+ back in 2007. The car was then sold twice after the original builder moved it on. From the original feature of the car, I could see that it was solid which was my main criteria. With my first Mk1, I was forever chasing rust and I didn’t want to revisit that expensive and time-consuming ground. I managed to track down one of the previous owners and wanted to get a further lowdown on the car. He regretted selling it and informed me it was a good example and that he knew it had continued to be well looked after following the original build. I spoke to the seller a few more times before finally agreeing to take a look and do the drive to Heathrow where it was located. I decided to view it one evening after work. I took the car for a test drive and it brought back so many memories of my first Mk1 Golf that I just had to have it. We did the deal and I drove it back from Heathrow that night”. 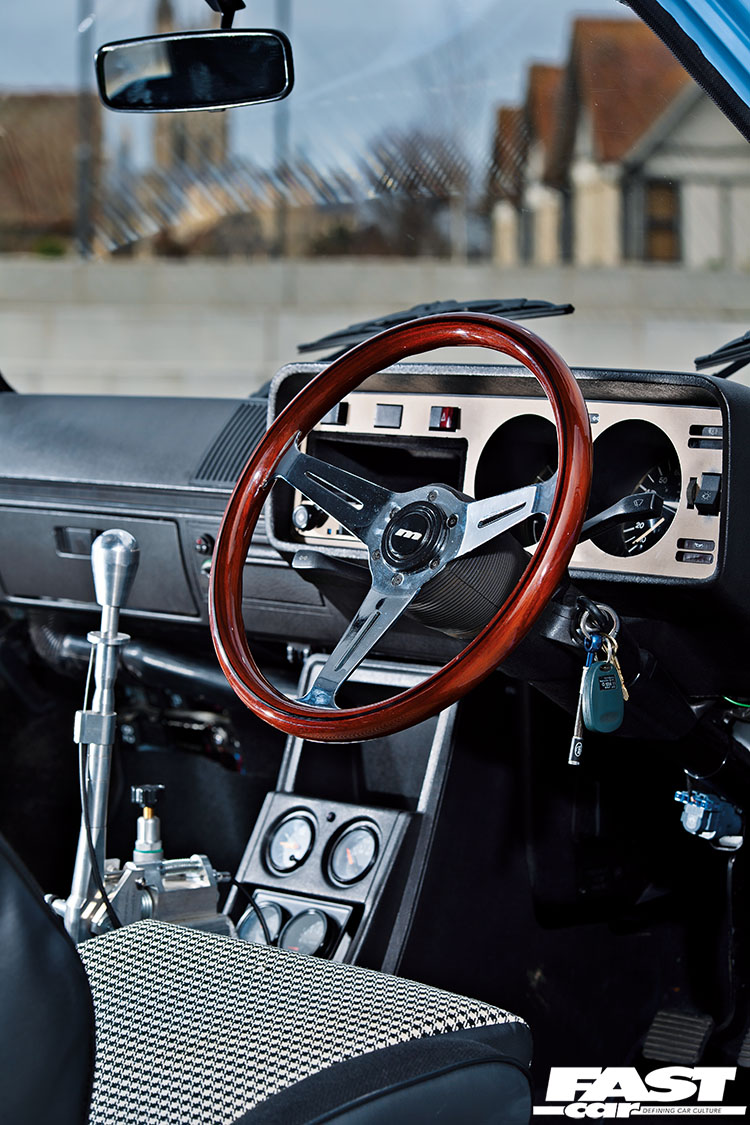 With the 1979 Mk1 Golf GTI in his possession, Jon intended to just carry out a little bit of minor fettling and essentially enjoy it, getting back to the show scene and having a car for weekend jaunts. A trip to an open day at nearby VAG specialist, Carbon Motive (where incidentally his new purchase won car of show) was to change all that. The Golf was already nicely modified and sported a KR 16v engine from a Mk2 on twin carbs. “We discussed a few plans for the car but things snowballed and after a couple of conversations with business owner, Neil, I decided to swap out the existing engine for a more reliable and faster 20V 1.8T BAM engine. The original plan was just to do an engine swap but the plan grew and ended up morphing into a full rebuild of the car, including new paint but still in the original Baby blue”.

The approach for this tuned VW Golf Mk1 was pretty much the opposite of what had been achieved with Jon’s previous project car. Whilst that was heavily modified on the exterior with an insurance friendly standard engine, this time the order of the day was to be subtlety on the exterior with a performance punch under the bonnet. The vast majority of the original GTI trim had long since been disposed of and the design purity of the lower models was adopted including that iconic houndstooth trim. 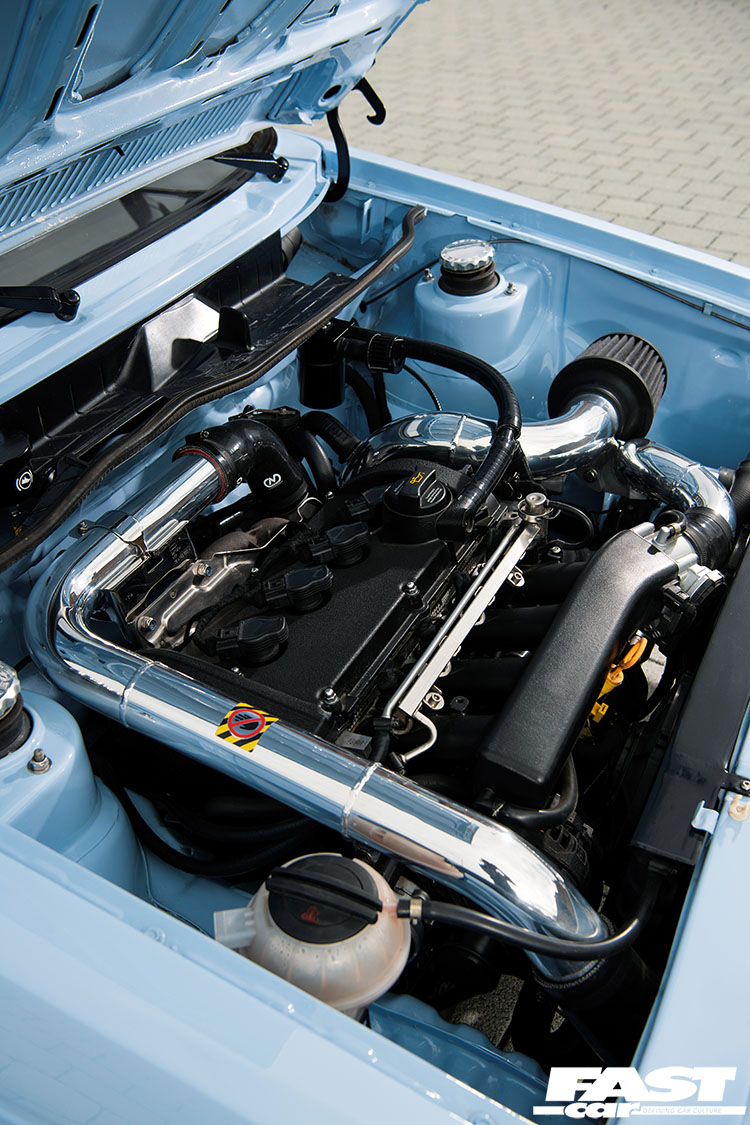 Soon the full restoration was underway. The KR engine was removed and the car was stripped and prepared prior to paint. Jon reports that there were a couple of minor areas that needed attention but his aforementioned detective work had paid dividends and generally, the shell was solid.  The car got painted and then went back to Neil at Carbon Motive for the rebuild. Jon had sourced a 1.8T BAM engine from a 2001 Audi TT with full history. The engine was stripped down to the block and head and was then painted. All new ancillaries including Audi R8 coil packs were fitted and the engine built back up. The motor was then refitted with Epytec mounts. A custom intercooler ensures optimum temperatures whilst the AEM performance induction kit and Trackslag full stainless exhaust bring the bark to the bang. The bay is a nice balance between functional performance and custom tidiness. The engine bay was completely de-seam sealed and unnecessary holes were welded up. The wires have been neatly tucked and the battery relocated to the boot. Small details make a big difference such as the hot surface factory-style warning sticker that was replicated by OEM stickers and applied to the custom polished pipework that was designed and fabricated by Neil at Carbon Motive and then polished by GS polishing. Despite the obvious age disparity between car and powerplant, the engine bay, as per the rest of the car has an OEM+ flavour that straddles the worlds of retro cool and serious performance. A Golf GTI Mk4 O2J gearbox was fitted along with a VR6 clutch, G60 flywheel and VW Motorsport shifter. A custom made pedal box completes the well thought out transmission package. 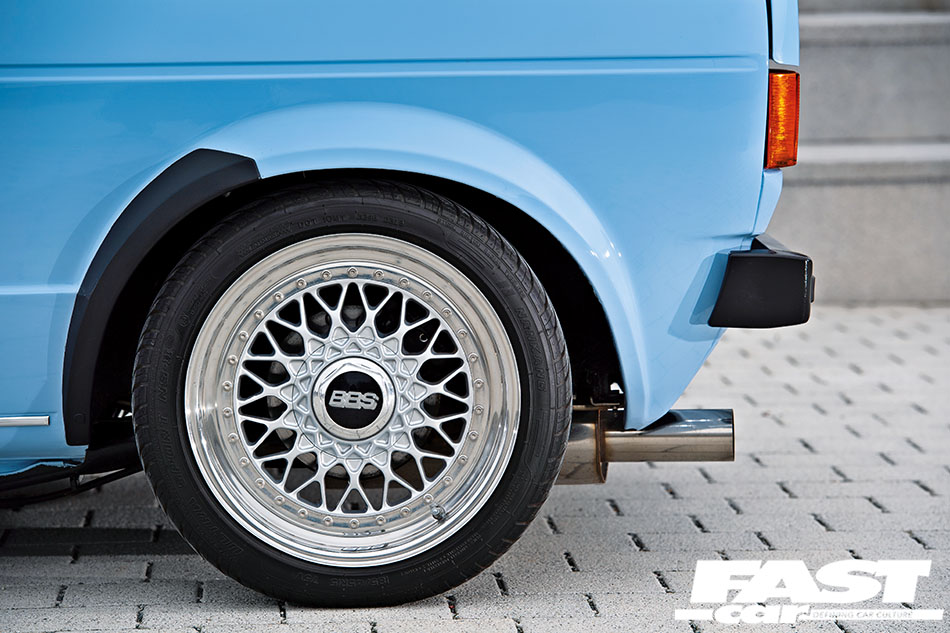 Jon was keen that the diminutive Golf handles as well as it looks and plumped for coilovers as opposed to air. At the time the photographs were taken, FK Sport’s kit was used but this has since been swapped out for BC Racing coilovers. “I have always liked the BBS RS’s on the Mk1, they are a timeless period wheel. There were a few other options that I considered and to be honest, I still am including BBS E52s, Compomotive Turbo Mags or a set of BBS E30s”. Our kind of guy. The BBS 001 measure a healthy 15×7 up front and 15×7.5 at the rear with the offsets of 20 and 30 respectively ensuring that the iconic rolling stock sits perfectly in the arch. Wishbones, rear beam and anti-roll bars were all powder coated. Tech-53’s Wilwood four-pot brake kit was used which Jon reports has been transformative and useful in a car as light as his tuned VW Golf Mk1 with 225 BHP on tap. HEL brake lines ensure great feel whilst an OMP brake bias kit provides plenty of adjustability.

Jon had a clear vision for the styling on his tuned VW Golf Mk1 and it shows: “My aim was to keep the car pretty OEM looking from the outside. I still like the period-correct pieces and the chrome. It’s had the swage trim removed but the recess kept and the rear of the car has been completely debadged”. A clear rear window and CL arch spats provide a bit of Euro-style minimalism whilst the chrome glistens timelessly on the grille surround, flag mirror, quarter glass trims, door latches and pins, bottom trim, bumpers and the boot latch. 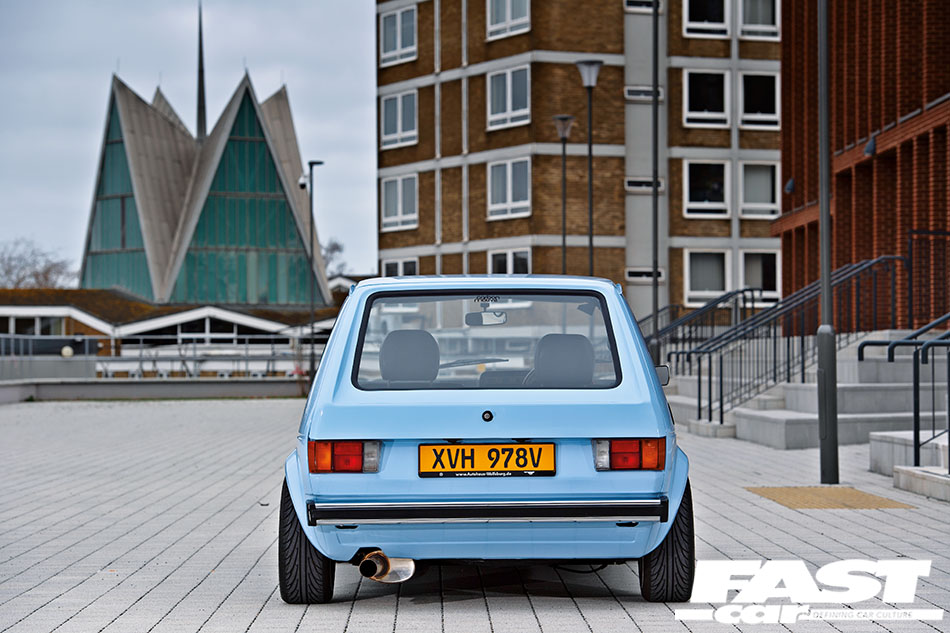 That achingly cool Driver houndstooth trim is joined in the cabin by additional auxiliary and boost gauges which are mounted neatly in the centre console. The exposed VW Motorsport shifter hints at the need to fasten one’s seatbelt. The interior package brings the project together and the holistic approach to retro looks with a hint of motorsport aggression that runs through the build is a masterclass in series one perfection. We’re pleased to report that although Jon stated, quite rightly, that “they’re never really finished”, his plans are more evolution than revolution. Future enhancements will include swapping out the O2J gearbox for a VW Passat diesel item for longer gearing, a shallow sump for improved ground clearance, a re-map and an upper rear strut brace. As with all projects, a bit of development is healthy but our IT expert has got this so right, there’s no need for a full reboot here.

My wife, for the many car parts that turned up to our house during the build, particularly when we had not long had our daughter! Massive thanks to Carbon Motive – I wouldn’t look anywhere else for my VAG needs, especially for Mk1s with his experience and passion for them. Neil is a top, top bloke – we have since become ‘Mk1 fwends’! Tech-53 for the brakes and GS polishing – again, top bloke