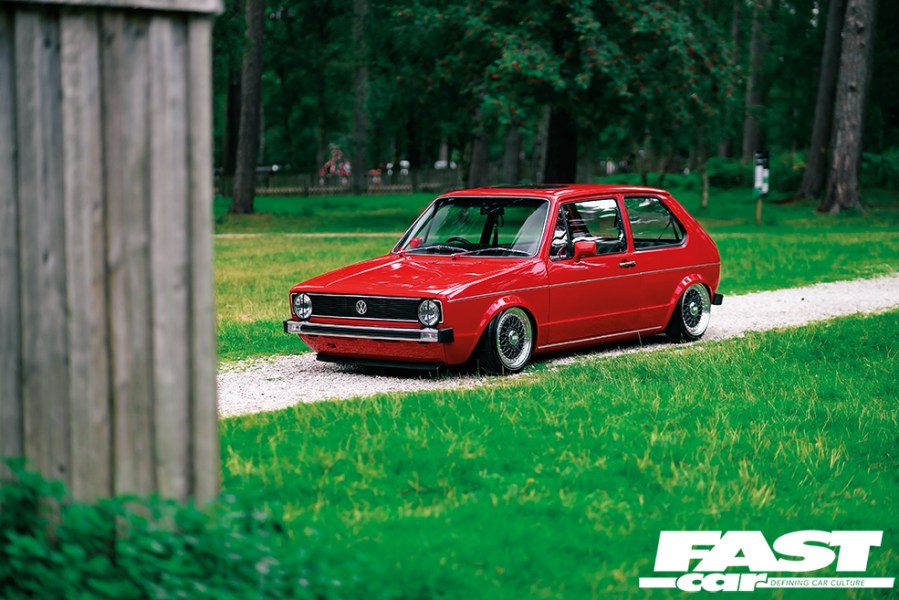 A modified Mk1 Golf Driver is a rare beast these days. Perhaps even more elusive is being able to pin down a gas engineer in these cold climes. We strike gold this month, though, and find both. Hopefully, we’ll be let off the call-out charge…

Thirty-five-year-old Wolverhampton-based gas engineer, Scott Russell, was generous enough to talk us through his epic build despite it being his busiest period. Scott started his driving career in a classic Mini that was engine swapped for a 1430 unit. A Vauxhall VX220, BMW 320i and Mercedes A-Class feature in his eclectic automotive history with campers also playing a leading role. Scott has previously owned a T4 and a Ford Transit Custom but has now gone full-size and is currently working on a 2017 VW Crafter for the family’s holidaying pleasure. 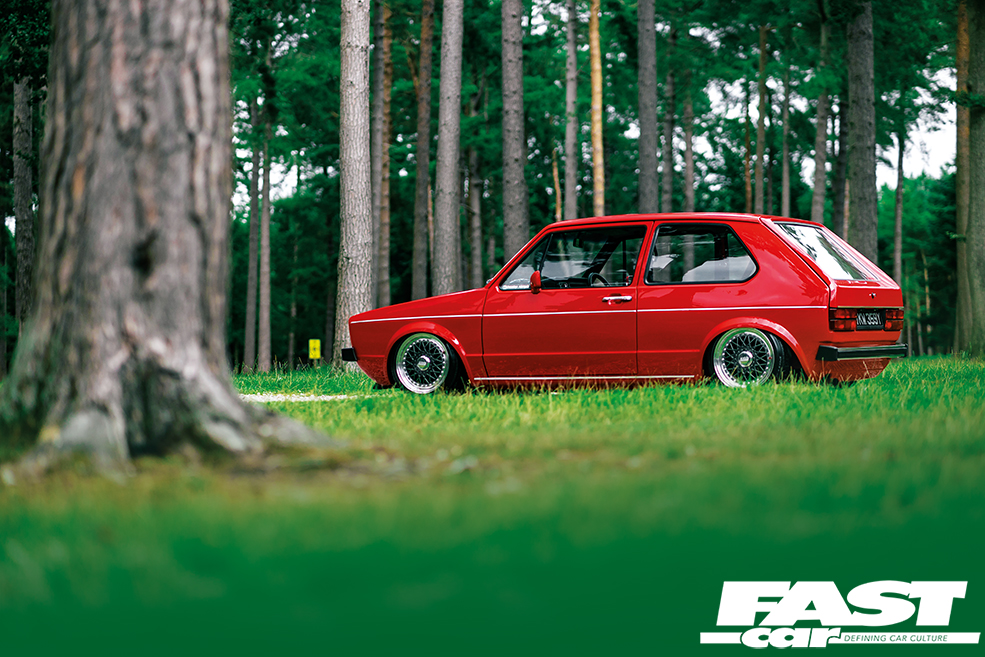 Scott purchased his first Mk1 Golf back in 2013 in the shape of a 1986 GTI Cabriolet. He explained how he got the VW bug largely due to the show scene: ”I found that VW shows and events are just so much more chilled and fun than the Mini shows. Modified examples are accepted and welcomed in a way that I’d never experienced in the Mini scene”. The Cabriolet needed some TLC but Scott was inspired by what he was seeing at various shows and got stuck into making it a presentable car. A year later, Scott was hooked and needed a tin-top Mk1 fix. As per Murphy’s law, the chosen e-Bay purchase was all the way up in bonnie Scotland. The 1983 Driver was duly collected and, although far from the show-winner you see here, was a well-specced car with a rev-happy ABF 16 valve motor already in place. “I ran both Golfs for a while but I sold the Cab to fund a T4 campervan to stay in at shows. Me and my wife, Gem got fed up with staying in tents and we looked longingly at the cosy looking vans. The normal routine for us now is for me and my daughter, Daisy to travel to a show in the Mk1 whilst my son, Billy and Gem jump in the Crafter. We then all camp in the comfort of the van. When we had the T4, it blew up on the way to VW Festival at Harewood House on a Friday afternoon, two hours from home. Not wanting further disappointment, we slung our camping gear in our friend’s T6 and the four of us clambered in the Mk1 and retrieved the broken T4 on the Sunday”. Now that’s what we call dedication. 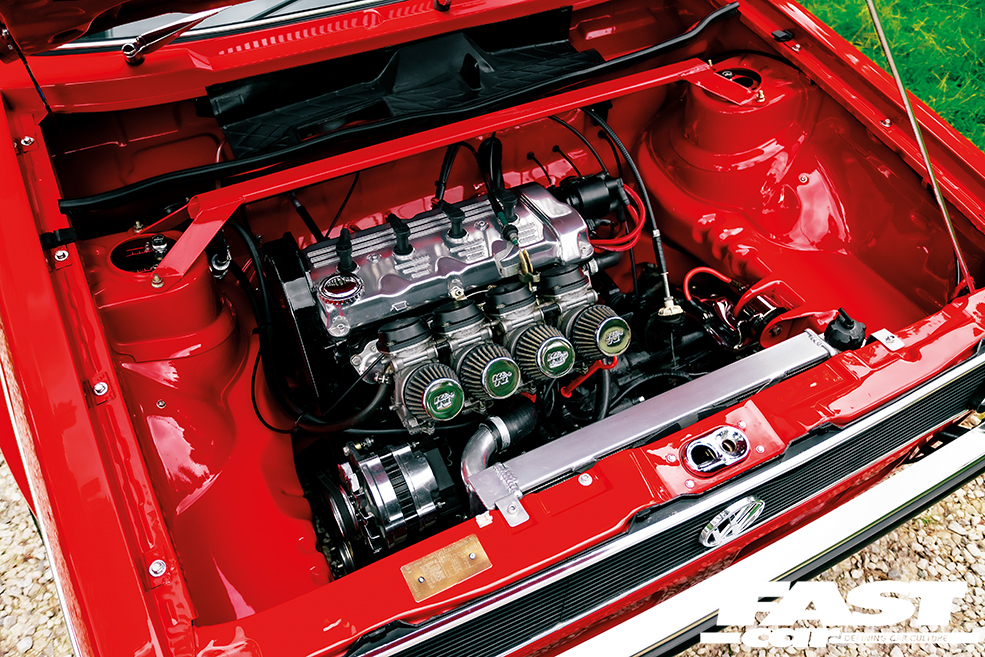 As is so often the case, the modified Mk1 Golf Driver wasn’t originally bought to transform into a show car. The intention was to drive it hard and enjoy it. Brakes were thus a first sensible modification with 280mm G60 drilled and grooved discs, MK3 Callipers, a motorsport pedal box and adjustable bias taking care of stopping duties admirably. KW coilovers were initially installed which suited the performance bent of the build in those early stages. The eagle-eyed amongst you will have seen that this has since been swapped out for an Airlift system with 3P digital management. That jaw-dropping ride height is achieved with a chassis notch allowing those gorgeous 15″ BBS RM split rims with polished centres and stretched 165/50/15 Bridgestone Potenzas to be well tucked. A track rod flip kit and ball joint raiser kit complete the considered package. Scott enthused: “I Just love how it sits when aired-out and not having to constantly take the wheels off to adjust the suspension is a welcome treat”. 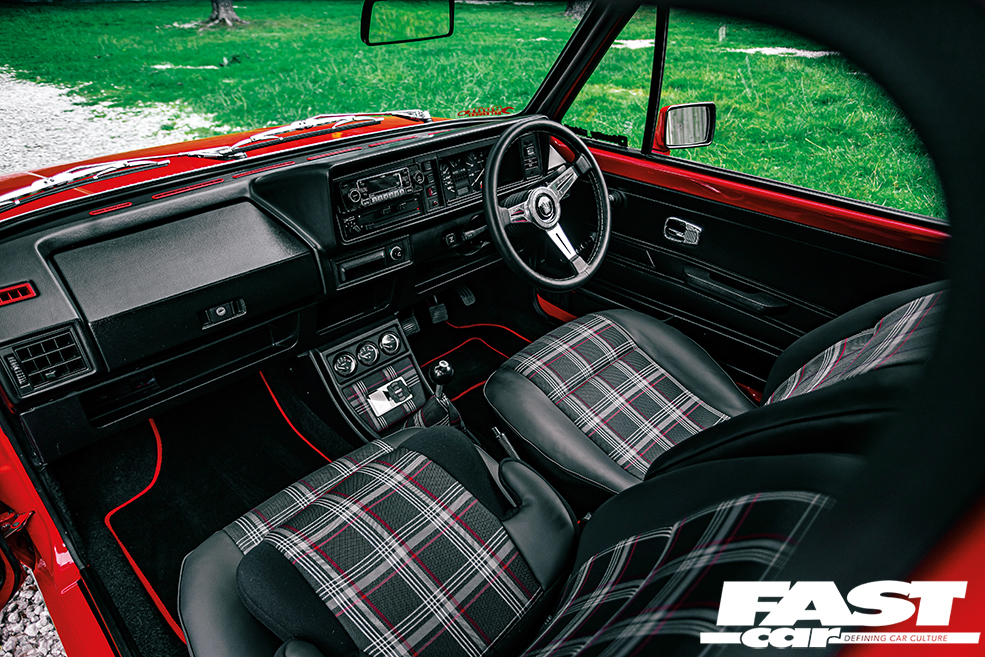 Although the aforementioned ABF was already fitted, by Scott’s admission it wasn’t the prettiest conversion. Tim at Trick Licks Bodyshop agreed to smooth and paint the bay on the proviso that Scott removed the engine and refitted it. Scott explained: “I’d never removed an engine before but Tim was always there to help me. Whilst the motor was removed, I used the opportunity to have the gearbox fully rebuilt and ordered many new parts for the engine. I got everything either chromed or painted before putting the engine back in. I spent many hours after work getting in Tim’s way coming up with ideas”.  This Mk1 follows a less is more, well-proven styling formula but the hidden attention to detail is superb. Custom paint adorns the car and the finish under the smoothed and rolled arches is better than that on the top of most cars. The big bumper delete has been done properly and gets rid of the bracketry apertures. Small stainless bumpers complement the chrome trim that includes the grille surround, filler cap, tailgate, side and screen trims and window wipers. The deletion of the rear wiper, aerial and rear towing eye are all touches that add to the minimalist Euro flavour. All red rear lights, clear front indicators and colour-coded wing mirrors represent a few cleverly chosen contemporary touches on an otherwise classic-looking theme, all of which suit the custom hue of the car. “With the number of man-hours this car needed in bodywork in the end, I would have been better off starting with a nicer shell as Tim reminds me of daily”. 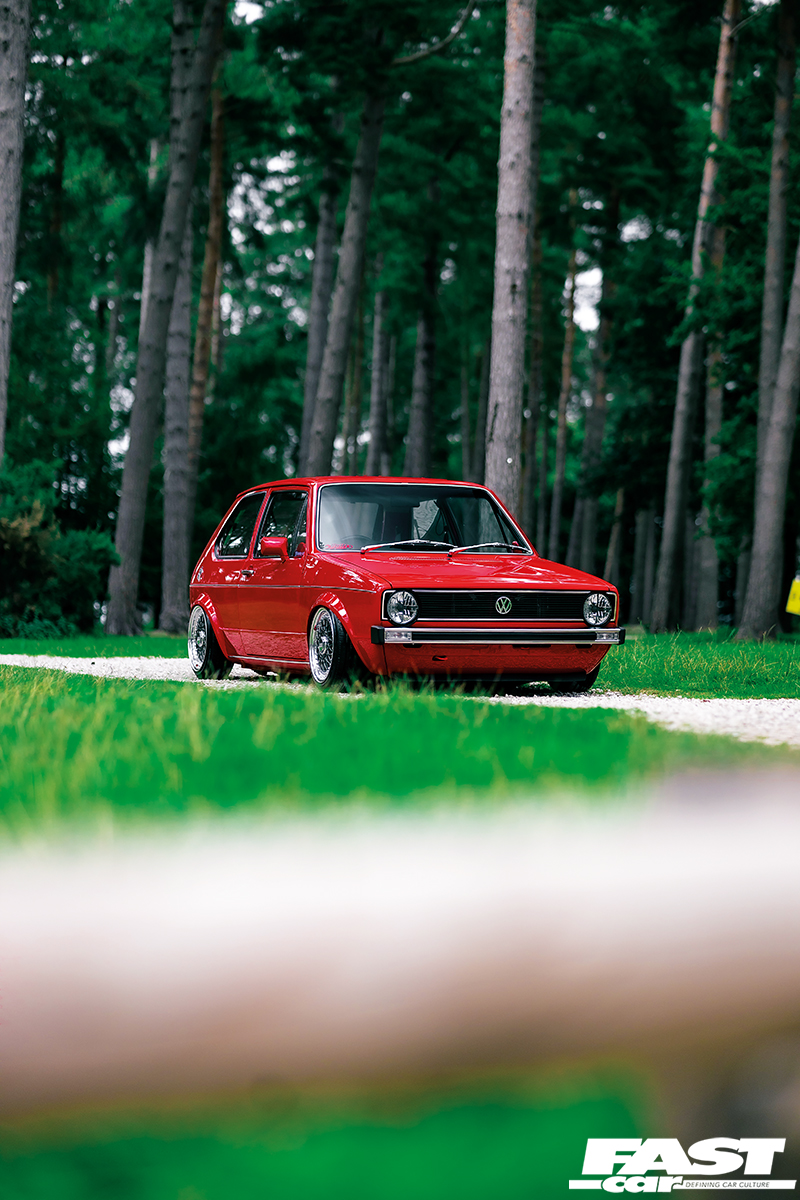 CE Automotive worked their magic on the mechanicals and Yamaha R1 bike carbs with K&N filters on a Borg Brothers custom manifold prove that the car is about go as well as show. This set-up is accentuated with the minimal ‘bay that utilises a wire tuck and relocation of battery and washer bottle to the boot. The ignition coil and brake reservoir are also hidden. A neat body-coloured strut brace provides some extra rigidity to the chassis whilst a custom 2″ stainless steel exhaust system adds to the bark of those bike carbs. A custom radiator keeps things cool and trusty O20 transmission swaps the cogs. CE was also responsible for the neat air ride installation. 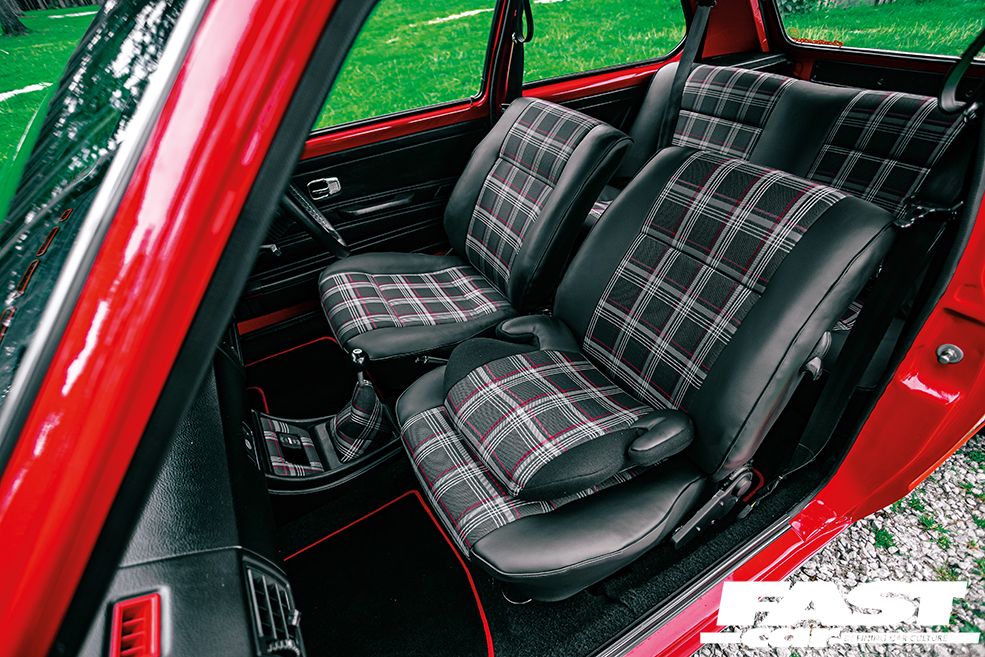 Inside the car is just as thoughtfully executed and features fully re-trimmed seats in leather and Mk7 Golf GTI tartan cloth with headrest delete and matching booster seat by Joe Elding. The Mk7 tartan theme continues with the custom centre console that neatly houses the Airlift 3P controls and with the matching gear lever gaiter. The chrome touches on the exterior of the car are complemented by those inside including door handles, window winders and mirror adjustment knobs. Triple VDO gauges provide an iconic way to monitor those all-important Ts and Ps whilst a hidden audio install with Ground Zero subwoofers under the seats brings the bass. A leather classic Nardi is a well-chosen, inkeeping tiller. And a bespoke boot build with custom painted air tank brings up the rear. 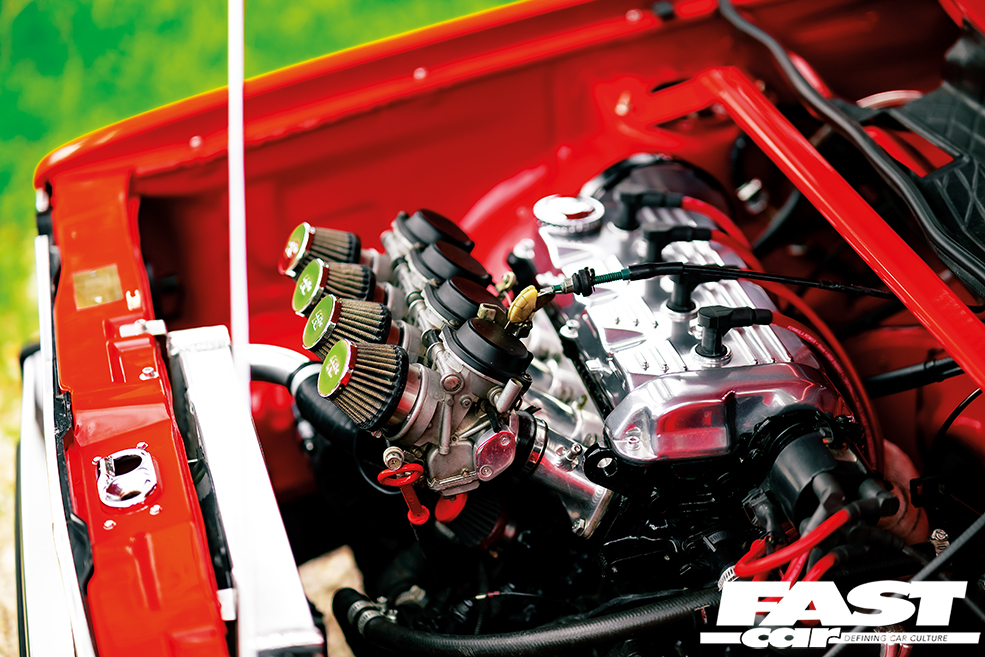 We’re huge fans of this radiant beauty, hence the feature, but don’t just take our word for it. It’s achieved an impressive trophy haul including Best of show at GTI festival, Sponsors choice at Ultimate Dubs, Best of Show at VW Action, Best of show at Dubs in the Middle (twice), Best of show at VDubs in the Valley and People’s Choice at the Mk1 Golf Annual Gathering. Scott proudly informed us that it’s won over 50 awards! “Being in this magazine is one of the things I never thought would be possible when buying this car. It’s taken seven hard years to get to this stage but I’m really pleased with the result. This car has helped create many happy family weekends and memories and has led to us meeting many good friends. That’s the best thing about car shows for me.”

So, what now? Scott would love a Porsche 996 or 997 which, of course, would be on air with BBS but for now, the Crafter remains an ongoing project and he and the family just want to enjoy the modified Mk1 Golf Driver and make more memories. Sounds good to us. We’re super grateful to Scott for spilling the beans on his Golf at his busiest time. We just hope we’re not being charged by the hour. 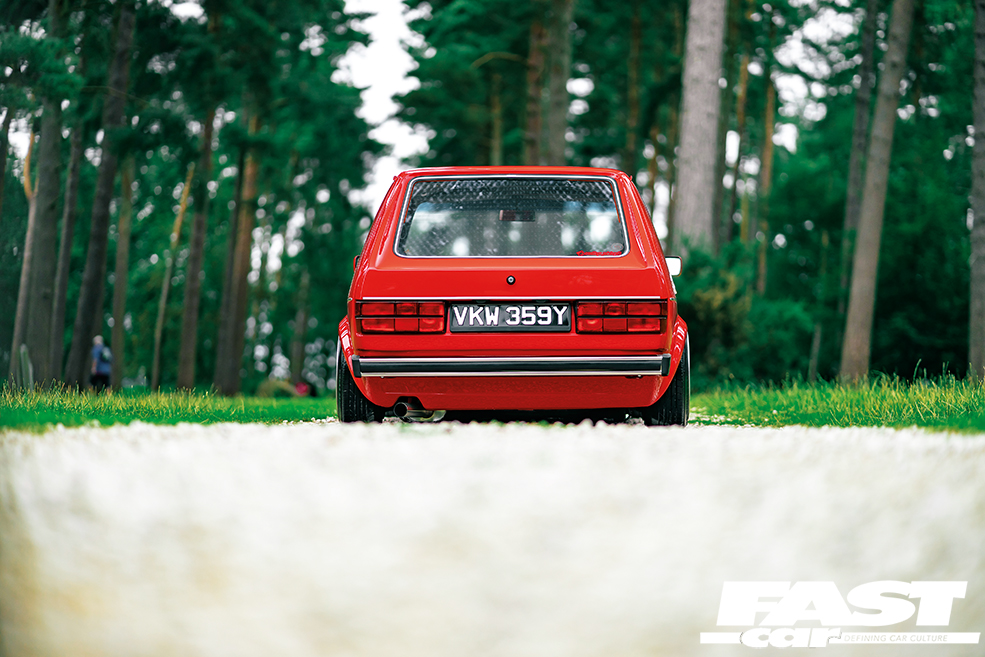