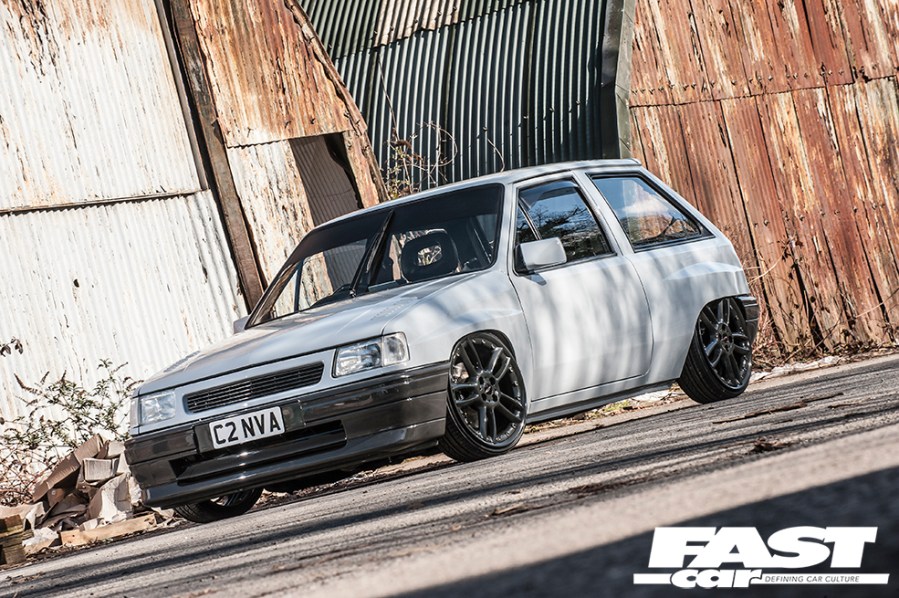 Enthusiasts of all ages know that the Vauxhall Nova is an all-time modding classic. And this smart restomod is the daddy of them all…

Nostalgia, as they say, ain’t what it used to be. There’s a generation of modifiers today whose knowledge of the Vauxhall Nova begins and ends with scans of old 1990s/2000s tuning mag features shared on back-in-the-day Instagram feeds, but to those of us who grew up modding in the nineties (and shut up, we’ve still got nearly all our own teeth and hair, thanks), these box-arched little hatchbacks are an essential part of everything we love about cars. Back then, you either had a Nova or you knew several people who did, they were just everywhere. Boss-man Jules’s first car was a Nova GTE with the obligatory Peco exhaust and TSW Stealths; my own first car was a 1.0 Nova base model that was so basic it didn’t even have a name. (Novas were renowned for being the car of a billion special editions – Spin, Splash, Fun, Swing, Gem, Ski, Antibes, Cricket, Life, Flair, countless others.) But even with a crummy 45bhp wheezebox, you got those iconic box arches that were so clearly inspired by the Audi Quattro and Lancia Delta Integrale – and hey, it was a Nova. Novas were just cool. Particularly when the press decided to hold them up as the icon of illegal cruise culture, then the baby Vaux took on proper villain cred…

For Nathan Powney, it was a drive in a Nova at the age of fifteen that made all the car-buying decisions he’d ever need to make in one fell swoop. “The Nova is the only car I’ve ever really taken any interest in,” he shrugs. “I’ve loved them since I was about 13, watching local lads modify them in my town. For me, current cars really don’t float my boat, the era of the Nova and Renault 5 still does it for me. Back when I was 15, I found myself driving a white Mk1 Nova around a field and that was where it all began; when I turned 17 I bought this Nova from my cousin – it was the first car I drove on the road; the modifying started before I passed my test, and carried on right through to the present day!” Now 32, Nathan’s owned four other Novas since those fledgling days, but he always kept this one to work on. Safe to say he knows it inside out and then some, having been monkeying around with it for so long, and the number of stylistic and technical evolutions it’s passed through is frankly staggering.

“All my cars have been fairly heavily modified, but I found that in 2015 when I felt like the car was finally finished, I realised that I had followed the basic Vauxhall setup – Speedlines and coilovers with a fairly plain interior,” he ponders. “As I was getting married in May 2018, I decided in May 2017 to strip the car and start again with an engine conversion, and bring it up to date with a new scene look.” So that’s precisely what he did, and it explains a lot – this isn’t the work of some scenester who’s taken a retro icon and cynically coloured it with the modern brush of fashion-forward paint, air-ride, and big tucked rims on skinny tyres. No, this is the product of a lifelong enthusiasm that’s simply going with the flow as the years pass by.

The car’s certainly seen a marked transformation from its humble roots. Originally sold as a Nova Fun special edition, (again, these specials weren’t always as exclusive as Vauxhall liked to make out…), it came from the factory with a 1.2i motor and not a huge amount else. By the time Nathan got hold of it, it was a £300 runabout to which he quickly fitted a full custom bodykit, 15” Fox alloys and a 5” exhaust. Scoff if you like, but we were all doing it.

“The next era saw the car going in for a full respray – in white again – and this time fitting 16” Dare alloys, a smaller exhaust and GMax lowering shocks and springs,” he recalls. “This slowly developed into another bodykit, with neon ground lights and a smooth boot. The next evolution was to strip it all down to a bare shell, cut out the stock arches and fit the S.I.D. wide-arch kit, which is 30mm wider. I went with this option as I was a fan of running larger wheels, but not the look of a full blown wide kit.”

At this stage the car became Lamborghini white, and Nathan sourced a rotten GSi to pillage it for its engine, bumpers and interior, stirring some Porsche D90s and coilovers into the mix. We’re loving the stroll down memory lane that this history provides, it’s like a who’s-who of à la mode modifying trends over the years, and it’s all evocative of the glory days we didn’t realise we missed quite so much. Nathan’s next move was to swap to Speedline Allessio wheels which, again, is a vital part of the fabric of Nova modding culture, and then… well, life got in the way at this point. With the mortgage and the first child appearing, it was time to be sensible, and the Nova found itself mothballed for a few years.

But, life’s too short to be sensible, isn’t it? Whereas most of us would have got shot of the old project as soon as being a grown-up (or at least pretending to) became a priority, Nathan is made of sterner stuff. When the family was settled, he built a garage space, stuck the Nova in it, and stripped it down to a bare shell once again.

“Every single part has been repainted, upgraded and updated from the last version,” he assures us. “I was bored of the white and wanted a new look, so this Storm Grey was my favourite after seeing a friend’s Fiesta ST200. I then wanted to go with large wheels, and found that the MINI wheels were the perfect fit for PCD and bore size. I kept with the GSI bumpers, but gave them a refresh, and with the engine I wanted more power but something not complicated or untidy, so I went with the C20XE setup and rebuilt it myself. Altogether I’ve taken inspiration and ideas from other people’s Novas at shows over the years and added my own touch onto how I wanted it to look.”

Perhaps the most significant element of this quest for uniqueness is the air-ride. This isn’t the first time we’ve seen 18” wheels tucked inside Nova arches – and the combination of skinny 165-section tyres and those 30mm-wider arches certainly helps – but the manner in which these weirdly unexpected MINI rims park themselves up there with that immediately recognisable psssh-psssh sound is enough to get every old-school modder running over to see what’s going on. Nathan’s used TA Technix hardware to get the aired-out Nova sitting pretty, and it’s really given the retro hatchback a 21st-century twist.

The fusion of old and new can be found throughout the car. Shaved engine bays with hidden wiring weren’t really a thing back in the nineties, and Nathan’s precision work here works perfectly with the classic choice of C20XE motor; moving inside the car we find SR seats and a GSi dash and console, just like the old days, but it’s all trimmed with a sumptuous contemporary finish. What this fella’s created is the sort of Nova we could never have dreamed of back at the turn of the century – it’s radically reworked, but not in the manner of fitting outrageous Kingdom bodykits or skinny 19” wheels or frenched lights; no, every single element of this car has been carefully considered, and the knowledge that flows through it stretches back across the decades. The best Nova in the country right now? We wouldn’t bet against it.

The Generation Game
The genius of this Nova is that it appeals to two distinct generations of modifying enthusiasts at once. For the old guard who grew up around Novas, this car ticks a lot of classic boxes: it’s got a C20XE, which is what everyone wanted back then, as well as the period S.I.D. arch kit, Wilwood front brakes (still with the drums at the back, natch), smoothed tailgate and doors with poppers, Cool Louvres bonnet, the fuel filler relocated to the door shut, the Astra digi-dash, and the GSi interior with SR seats. All the desirable touchpoints that would have made a killer Nova for a Saturday night cruise. But this car works equally well for the fans of today’s cutting-edge scene trends: air-ride, über-cool grey paint, wrong-manufacturer wheels, smoothed and tucked engine bay, Singer-like interior – this is the Holy Grail, a Nova that everyone one likes. (And if you don’t… well, you’re wrong, sorry.)

Thanks:
“Thanks to my family, friends and wife, who have all lent a hand when I’ve needed some advice and allowed me the time to spend building the car the way I wanted it. Being able to build the car from scratch myself has given me the best possible enjoyment from modifying any car.”