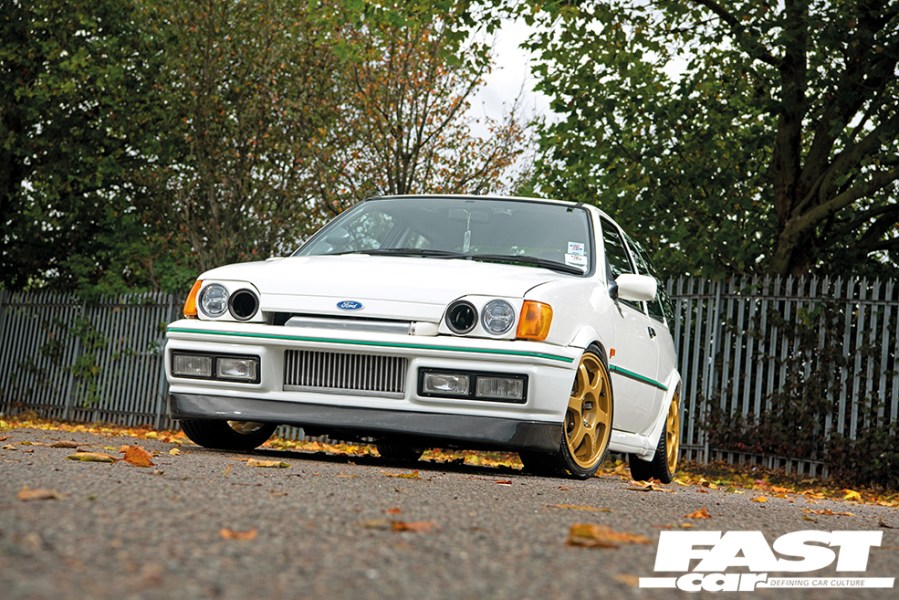 Having already built three Fast Ford feature cars – including an award-winning cover star – Jamie Hurley is back with his latest build, a modified Ford Fiesta RS Turbo. And it’s another winner…

Creating a winning combination when building a feature car is a hard task to pull off. It takes a mix of a good eye, tasteful modifications and experience.

Yet it seems some people have firmly cracked the code to building a feature-worthy Ford, as Jamie Hurley has managed to get into these pages no less than four times. This perfectly-detailed Fiesta is the latest in a line of well-modified cars we’ve featured and it displays all of his trademarks: a carefully selected combination of parts and pieces to create an eye-catching and well-performing all-rounder. Being a Fast Ford feature car veteran, Jamie knows what works and what doesn’t, and it helps he’s had a long history with fast Fords.

He explains, “My first car was a Fiesta XR2 when I was 16. Then I bought a mint Renault 5 GT Turbo on my 17th birthday, before I progressed to RS Turbos, then Cosworths. I did go to the dark side with a few Mitsubishi Evos, but I always went back to Fords.” 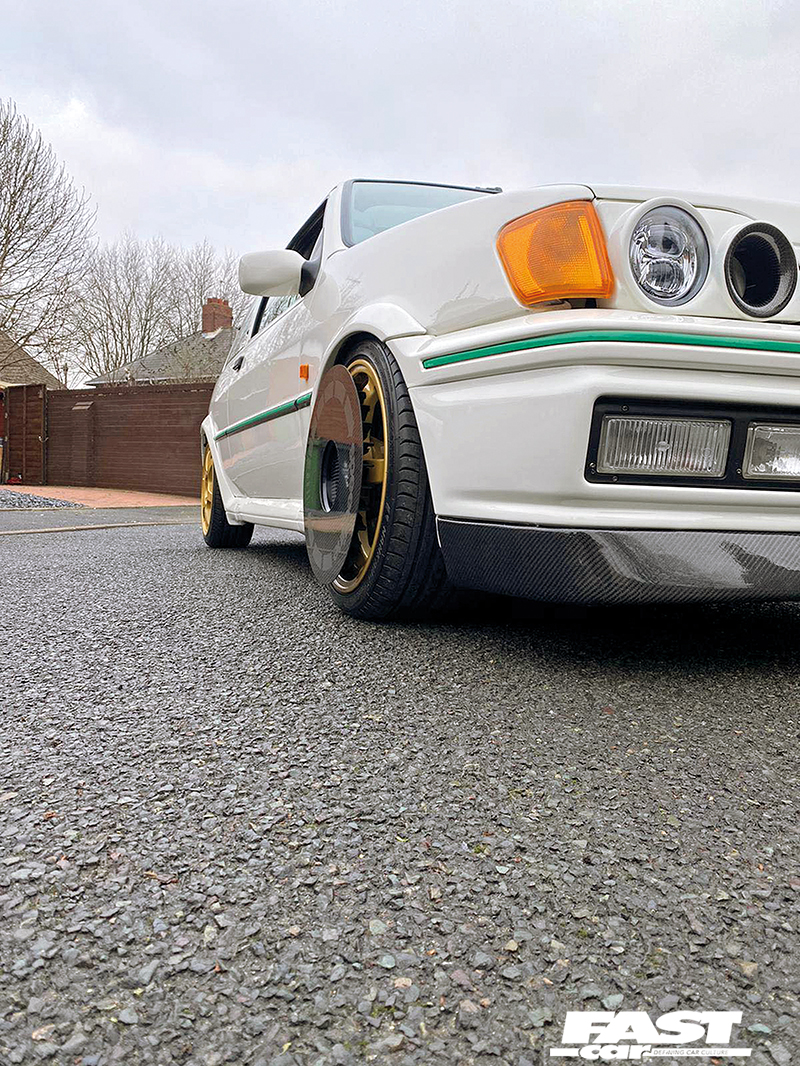 In total, Jamie reckons he’s owned more than 20 XR or RS models through the years, with everything from a Mk1 Focus RS to an Escort Cosworth passing through his hands.

He chuckles, “And that’s just the Fords. If I listed every car we would be here a while.”

As you can gather, Jamie is no stranger to a modified Ford, but it was his previous modified Ford Fiesta RS Turbo that really raised the bar, featured on Fast Ford’s front cover back in November 2019. The super-clean Mercury Grey example was also chosen by readers as our 2019 Car of the Year winner, and was a firm favourite at any show it attended. Despite that, Jamie decided to sell it in 2020. 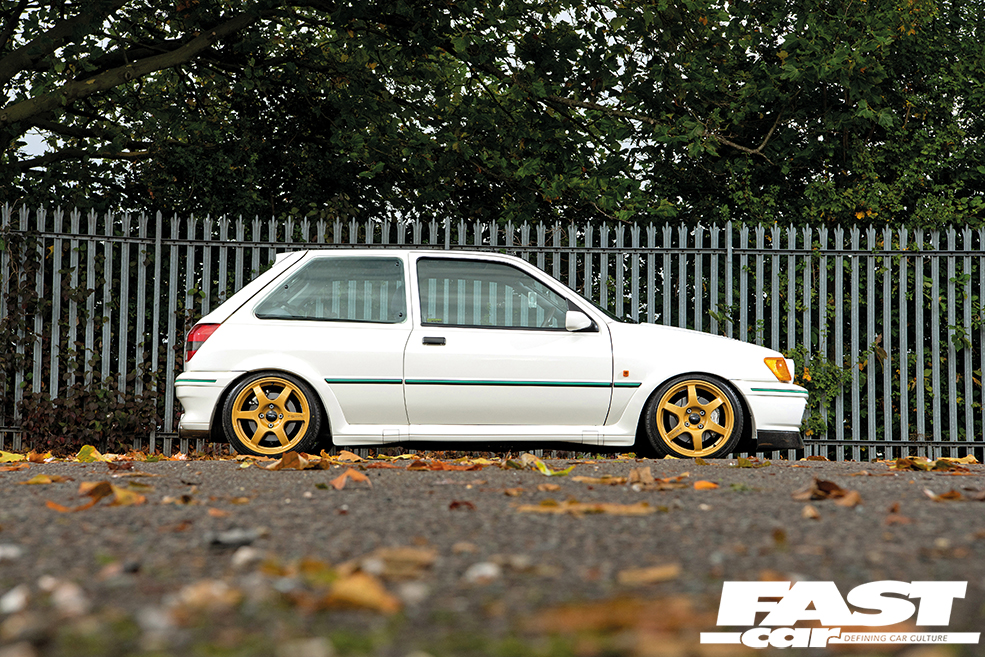 “During lockdown I couldn’t take it to any shows, so I got a bit bored and then someone offered me mega money for it. I would have been stupid not to take it, so a deal was done. I do still regret it, but that’s life,” says Jamie.

With the money in his pocket, Jamie went looking for something newer to replace the RS Turbo and found a suitable Mk2 Focus RS. He then spent a small fortune modifying it to around 450bhp in a short space of time, but soon began looking for another Mk3 Fiesta.

“I honestly don’t know what it is I like about them so much; they’re just so small and easy to modify,” he says. 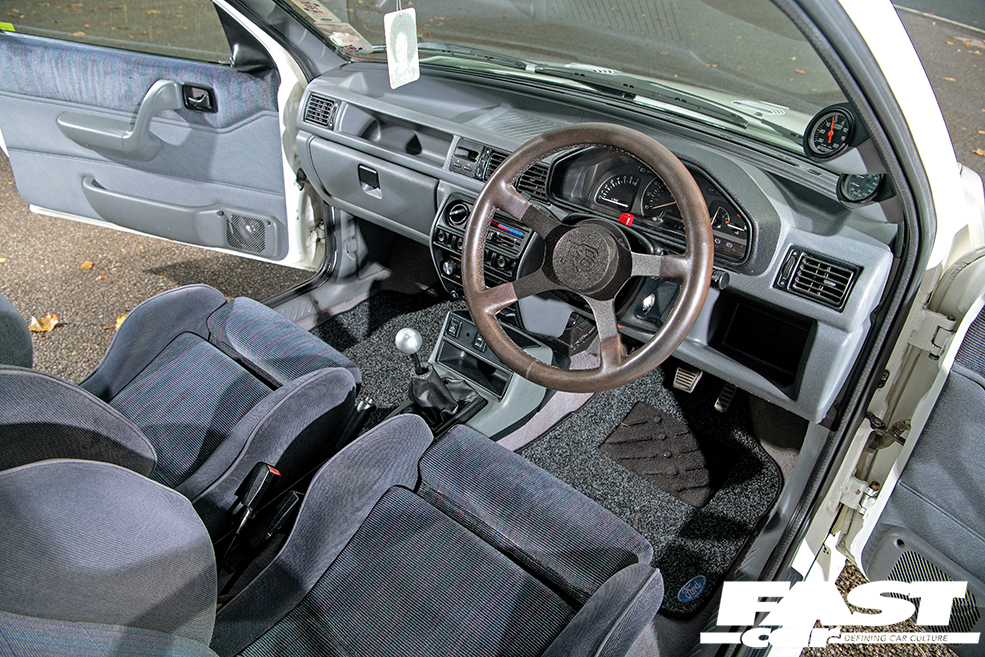 With near-perfect timing, this Diamond White example with some choice modifications came up for sale on social media. Keen to do a deal with his Ford Focus RS, it appeared Jamie would soon be behind the wheel of a Fiesta once again. But the car was sold before the deal was done, until fate thankfully stepped in.

“The last owner had sold it to one of those car competition sites before we could do a deal, but then I managed to contact the chap who won it,” Jamie recalls. “I had been told that it needed nothing, and as I thought these competition sites only did mint cars, I agreed with the seller on a price and sent a trailer to pick it up without even seeing it.”

But that was a big mistake, says Jamie. “I’ve never bought a car blind and never will again, not without seeing it first with my own eyes, as clearly my interpretation of mint is completely different from others’.”

The car had been delivered to a friend’s bodyshop in preparation for the planned modifications Jamie had in mind, but when his friend told him he should come and have a look at the car, it was not good.

“When I first saw, it I considered putting it straight back up for sale right then. I didn’t even drive the car. I hated it. There were just lots of little bits all over the car; scuffs, parts missing and paint was needed in several places. It was far from mint,” Jamie says. 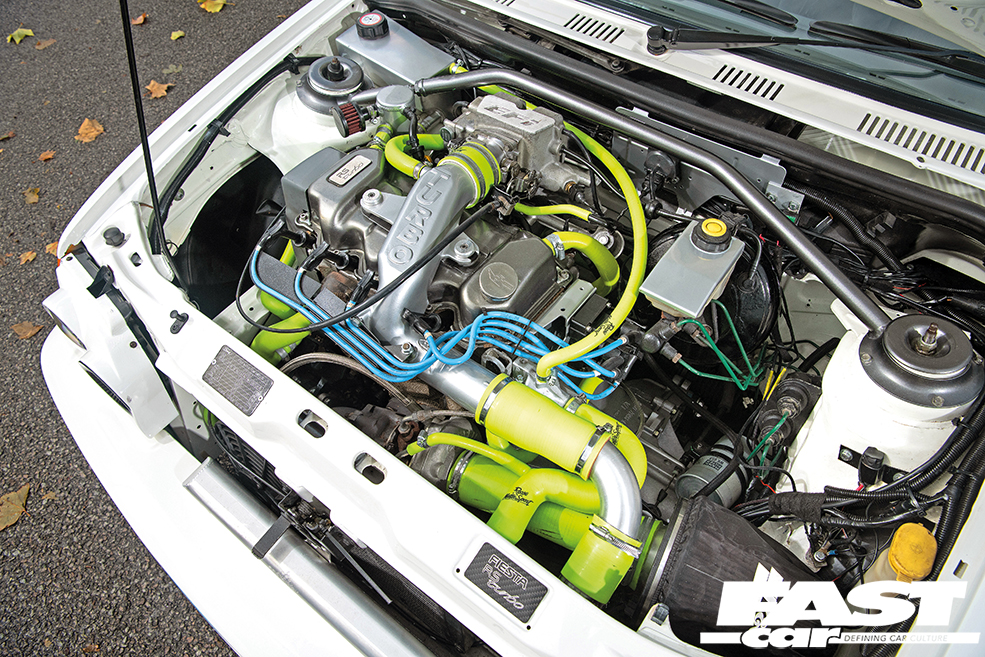 But there was no doubt that the Fiesta also had some good points; a genuine 83,000-mile car that had a great history and paperwork to go with it. Jamie even managed to speak to the original owner of the car and found out the number plate has been on since new.

After considering his options, he decided to keep the Ford Fiesta RS Turbo, address the various issues and bring the Fiesta back to a standard that he could then set about putting on his own well-detailed mark – although the modifications that came with it would also need putting right.

Jamie says, “The car came with Omex management and some 15in alloys, as well as some cheap shocks and springs, some really cheap lights and a mix-and-match exhaust. I thought ‘where do I start?’ I hate these cars standard-looking but I wanted the inside to look factory fresh and the outside just like my other builds.” 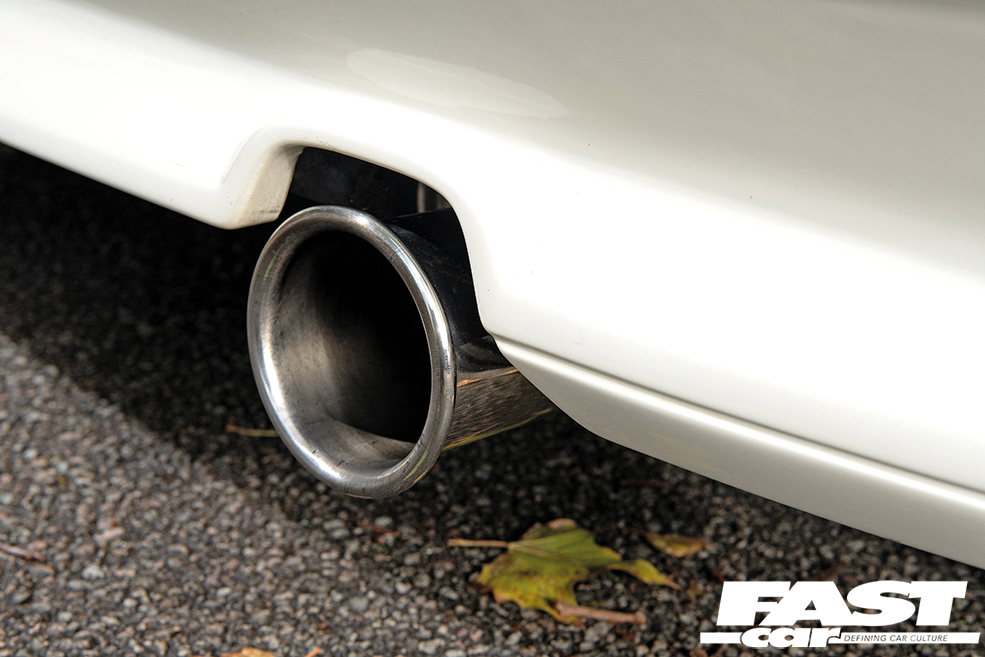 That look included the carefully cut-out front bumper, custom headlights and perfect wheel setup, among plenty of other finer touches to ensure the car stood out while remaining subtle.

With the Fiesta finally looking the part, Jamie felt he had turned a corner with the build. But the saga didn’t end there, as the first journey out to a car show revealed the engine was far from healthy.

“The temperature gauge was in the red for most of the trip and it didn’t feel right, as it was very slow for the power. And the standard gearbox turned out to be scrap.” 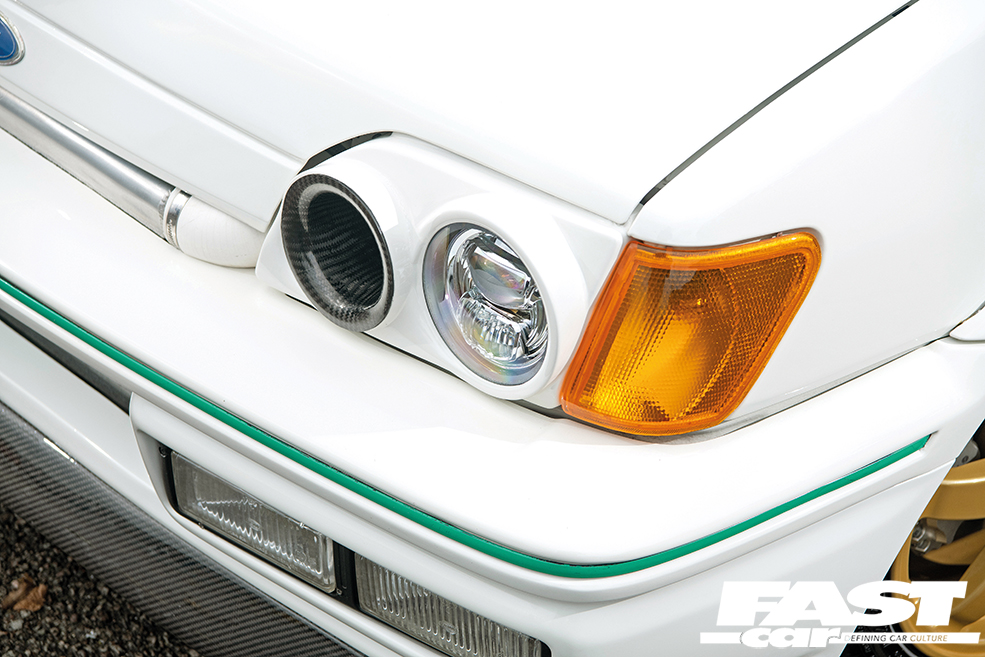 Although the bad news didn’t go down well, Jamie didn’t have time to stop and worry about it, as he was then invited onto the Fast Ford stand at Ford Fair 2021 . With little time until the show, he decided to swap the entire engine and gearbox for a combination he had for another project.

“There were a lot of late nights to get it all up and running in time for the show. I also had to tackle some wiring and fuelling issues too,” Jamie explains. “But now it has around 245bhp and an uprated gearbox with a Quaife LSD. It’s a great engine that was built by Matt Lewis Motorsport a few years ago and has some very fancy head work.”

The result of the intensive freshen up process is a fast Fiesta that pulls off the perfect look once again. What’s more, it’s far more usable than his last car, which is a major plus point for Jamie. 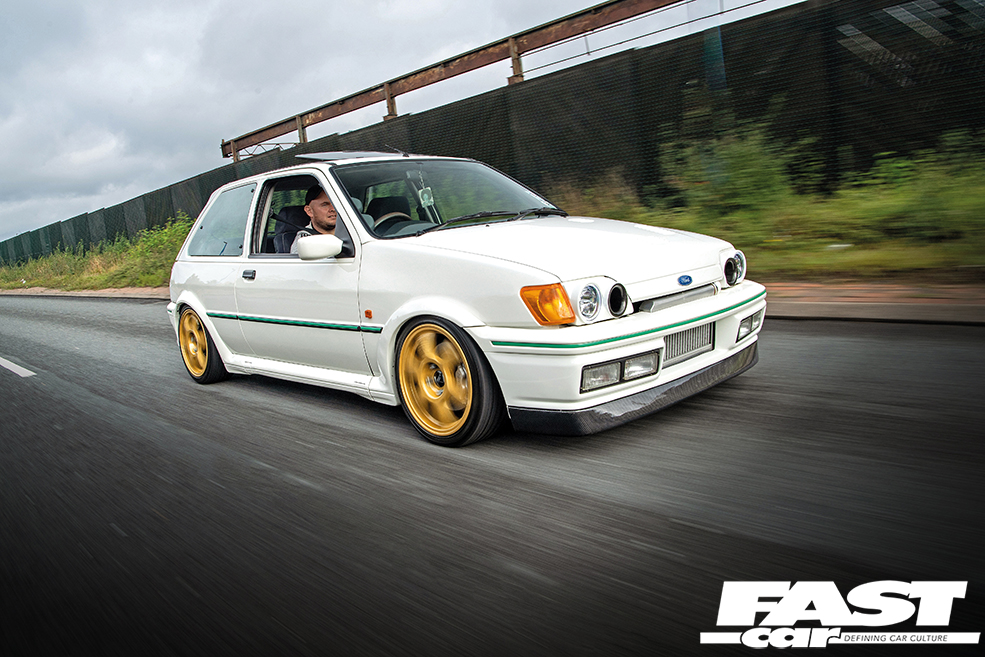 “The grey one was very quick and was absolutely immaculate, including underneath, which meant I never wanted to use it properly or take it out in the rain,” he says.

“But this car gets used how it should and is no trailer queen. I used it for my brother’s wedding the other day, even though it was raining. I would jump in and take it anywhere. Plus, it’s so lightweight it goes really well and makes great power.”

But Jamie admits he has no sentimental attachment to the car and everything is for sale. So let’s look forward to his next build, coming soon to the pages of Fast Ford…