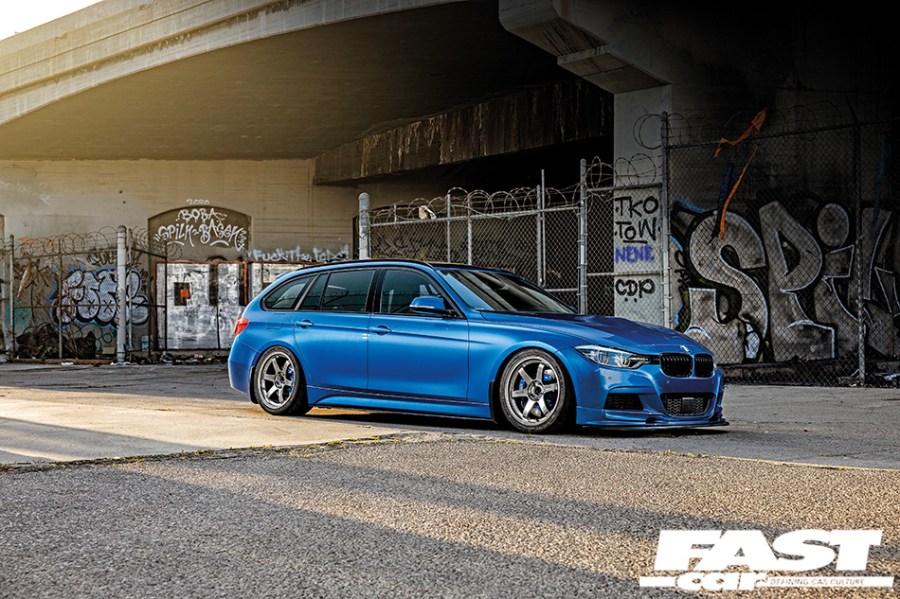 Johnny Feng sold his BMW M3, bought a 328d F31 Touring and modified it with a twist of Japanese culture. Why? Because he’s a unique thinker!

So much of the modern automotive scene is siloed and exclusionist. It’s not always pretty, but that’s the way it is: a certain sector of the classic Mini scene hates all things BMW MINI with a passion. Harley Davidsons in the States are essentially a religion. And yes, there are BMW die-hards who will shun any member of the group who may express a passing fondness for any other brand.

That’s a part of the scene, but it’s not the whole scene. There are plenty of people out there going to great lengths to accommodate a broad spectrum of ideas, drawing inspiration from other scenes, other marques, other ways of doing things from across the globe. And it’s within this pan-dimensional mindset that Johnny Feng (@oem_nub) operates. He’s a die-hard BMW man, for sure. But he’s got a strong fondness for JDM rides too, and has extensively dabbled in both, the shared knowledge from each direction ultimately culminating in the glorious Estoril blue, modified BMW F31 Touring you see before you. 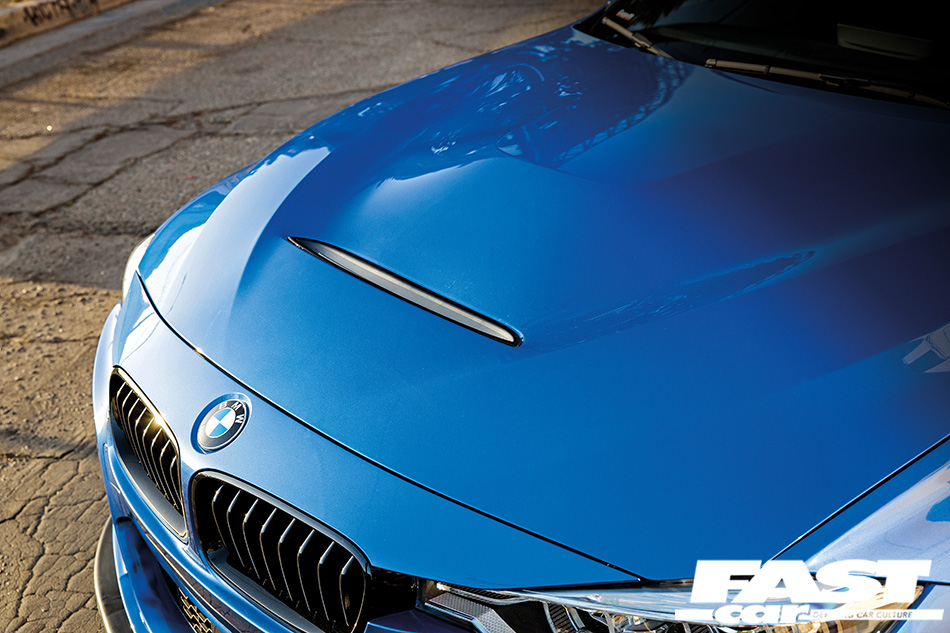 It was a toy BMW E34 that he had as a kid which planted that first Bavarian seed in his affections, and with a growing passion for BMWs throughout his childhood, it seemed inevitable that Johnny’s first car would be a Beemer. It was written in the stars. Well, until a certain high-octane movie came out and skewed things a bit. “My first car was actually a Mitsubishi Eclipse GS-T – you can blame The Fast and the Furious for that,” he laughs. That car ended up with a Veilside kit and various other mods, and acted as a sort of gateway drug to Japanese tuning culture; his next ride was a Lexus IS300, which turned into a full-on show car with all sorts of carbon and JDM Altezza bits. Then came an Acura Integra GSR, and a Lexus IS250 that went through various evolutions and mag features; this Lexus was running Volk TE37s. Tuck that little detail away in your top pocket, we’ll be needing it later. And finally, those childhood dreams elbowed their way to the fore, and Johnny got himself his first BMW. The realisation of a long-held ambition. Of course, after all this experience in the import tuner scene, his outlook was rather different to how it might have been if he’d got straight into BMWs from day one. 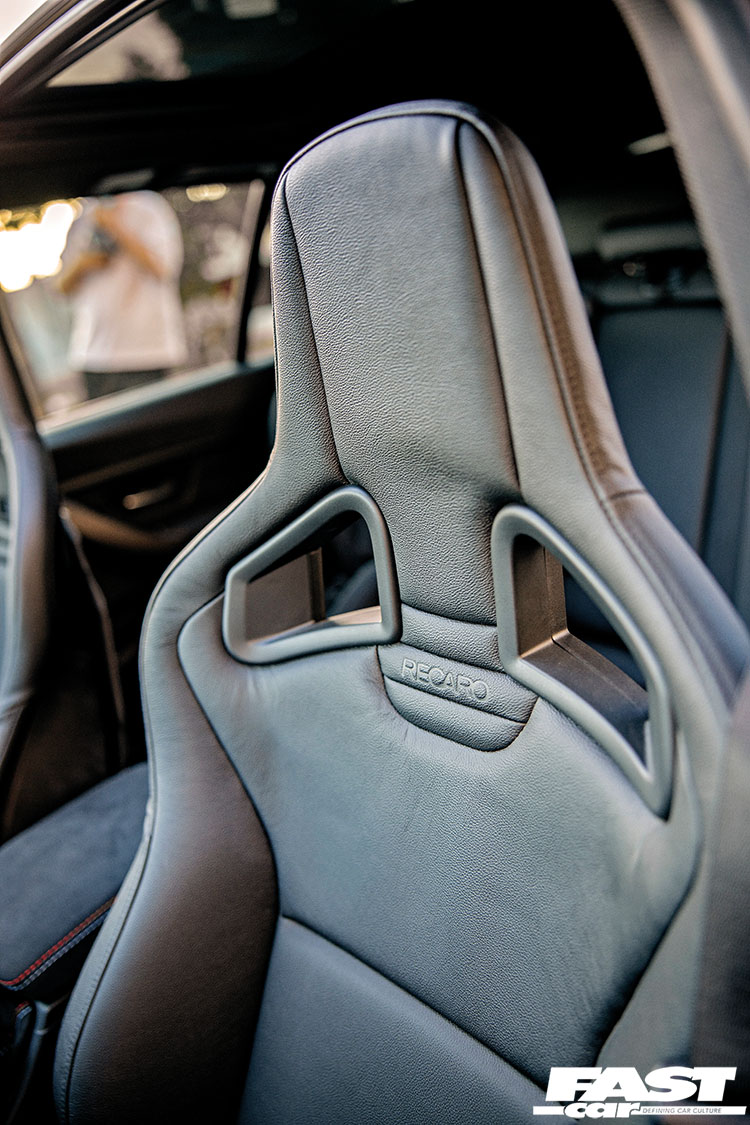 “I got my first BMW from a friend as a daily driver,” he says. “It was a 1990 BMW E30 325i, five-speed and Alpine white. I bought it for a cool $2000, which I paid in four instalments of $500. This was the car that started my love for DIY mods, I went to junkyards to find parts for it and even spray-painted the front bumper myself.” This one was a pretty clean build, lowered on Rota wheels and with a little OEM+ styling, but Johnny was just starting to get into his stride here. “When I got my first real job, I bought an E46 M3,” he continues. “This car was a CSL-style build, I had all of the Vorsteiner V-CSL parts on there. It had TE37s, Brembos front and rear, leather Pole Positions, and a rare JDM titanium exhaust. I sold this car when I had my first daughter.”

There are a number of interesting points to unpick there. First of all, it’s plainly evident that nothing stays stock in Johnny’s hands, and that he’s the type to go all-in with quality mods rather than ever taking any half-measures. These BMWs are being shaken up with a clear Japanese flavour. And the family angle? That’ll come to shape the following builds quite noticeably. “I upgraded to an E90 M3 because it had more space,” he says, not unreasonably. “That was Alpine white too, a really rare spec, and eventually I put a carbon fibre roof on it as well as a set of TE37s. I only ended up selling that so I could buy the wagon…”

There are not many people who’d opt to make the switch from an M3 to a diesel-powered Touring, but don’t go thinking that this was a totally sensible choice. With all we’ve learned about Johnny so far, it shouldn’t come as too much of a surprise to learn that he had a few tricks up his sleeve.“ I really loved the way the F31 Touring looked, especially the M Sports,” he says. “The F3x M Sport is definitely going to be one of the classic BMW looks that will go down in history. And I also wanted to see what diesel was all about – the fuel efficiency is great, and the car is an automatic, which means my wife can drive it too.” The car was found on a forum – a lease return model, meaning that it was in very good order throughout, and he wouldn’t have a whole bunch of fixing to do. And yes, naturally, there was a plan from the start. This lifestyle doesn’t just leave you overnight. 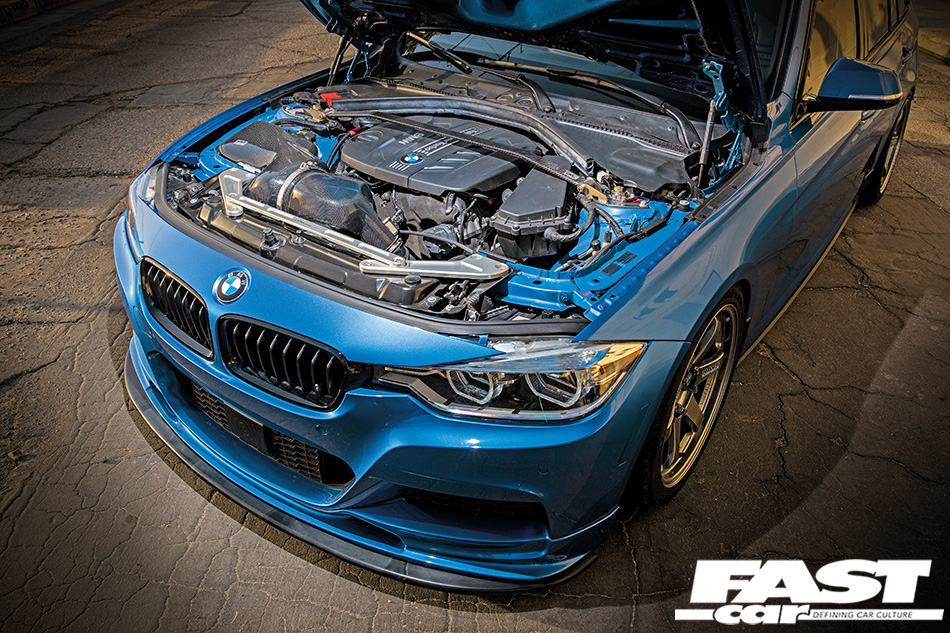 “The Touring was totally stock when I bought it – now I’ve modified just about every single part of it,” Johnny laughs. “To begin with, I was planning just to do simple OEM mods, it originally had all the M Performance exterior parts, but I wanted to look a little different, so I went the Japanese Domestic Market route for aero. Every BMW 3 Series out there had the M Performance body kit, usually replicas, so I wanted to create something unique.”

This is where Johnny’s experience in the JDM aftermarket really helped out with his modified BMW F31 Touring build; the bulk of the project took place during lockdown when he didn’t have a whole lot to do and was able to fully throw himself into the build. Well, the project had actually been bubbling away for a few years, with the car in regular service as the family daily. But when lockdown hit, he was able to really level up – and what’s particularly telling is that Johnny was building another car at the same time: an Acura Integra GSR. This American-badged Honda was fully rebuilt from top to bottom in this time, painted Championship White and swapped to a JDM nose, with various Spoon parts and OEM Honda Type R upgrades. With all that going in, there was bound to be a bit of wasabi stirred into the F31 recipe along the way. 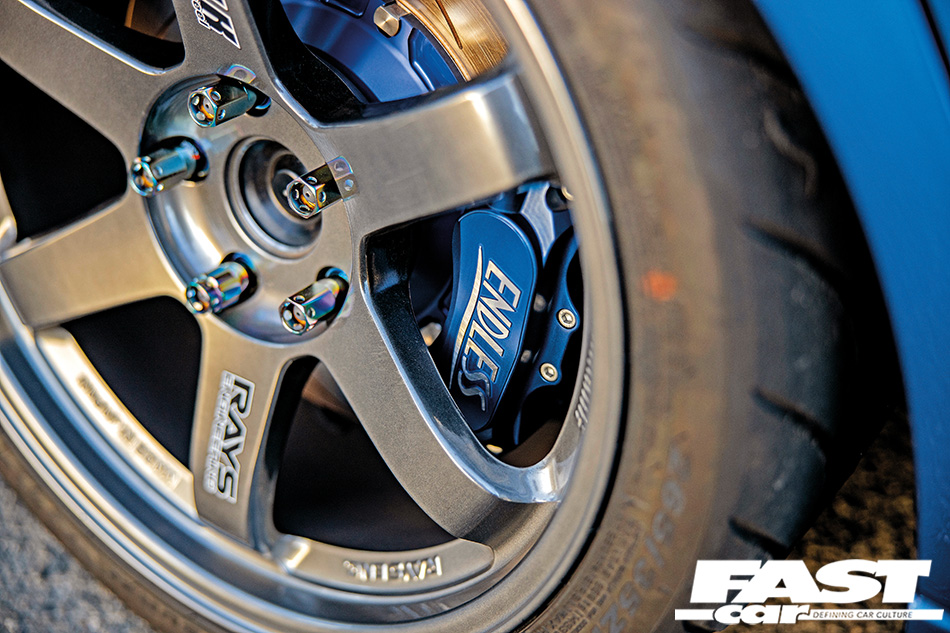 “I loved Volk TE37s ever since I owned my first Japanese cars,” he reminds us, “and at that point having concave TEs was pretty much unheard of on the BMW F31 3 series chassis. I saw one car do it in the past, but there was so much camber that it made the car look unfunctional. Eventually, I found a great size that fitted while using meaty tires and not too much camber – thank goodness for Honda making the FK8 Civic Type R in a 5×120 bolt pattern, this opened up the door for a lot of Japanese wheels in the bolt pattern that fits BMWs. Same bore size too! I did also run BBS wheels on it since I had to do it on a BMW; I put BBS LM and E88s on it before, but the TE37 has my heart.”

With great rims comes great responsibility, and Johnny had much work to do throughout the chassis. KW V1 coilovers were his go-to, with Vorshlag camber plates and Megan Racing camber arms to get the wheels where he wanted them. Japanese BMW tuning outfit Studie AG pointed him towards the CPM front member brace and carbon strut brace, and these little touches all added up to a great little mover as well as something that looked totally unlike any other BMW on the local scene. 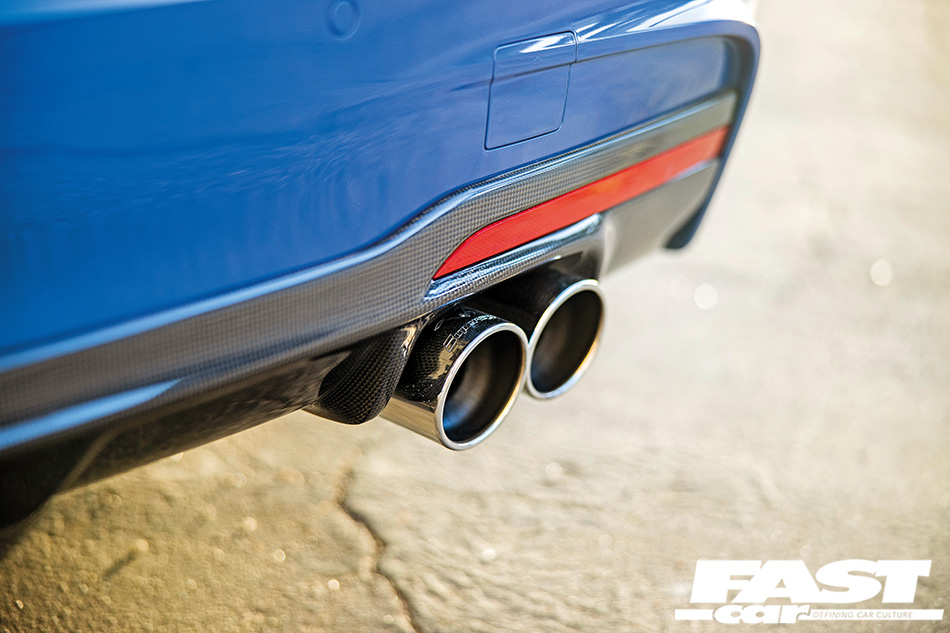 “I went with simple bolt-ons for the exterior styling,” he continues. “I used the full body kit from 3DDesign, comprising the front lip, rear diffuser and roof spoiler. I was the first in the United States to run these, and I also went with the GTS hood since I felt like I needed something more aggressive to match the rest of the car – it’s also an OEM-style mod, so I went with it. The hood vent is actually OEM BMW, and the hood itself is probably the only replica part I have on the car.”

When it came to power, it would be safe to assume that Johnny wanted to keep things fairly stock here. After all, he’d bought the F31 BMW 328d Touring as a sensible family run-around, and a keen interest in the gas mileage of diesel power was front-and-centre in the decision-making process. But you know what they say about assumptions… 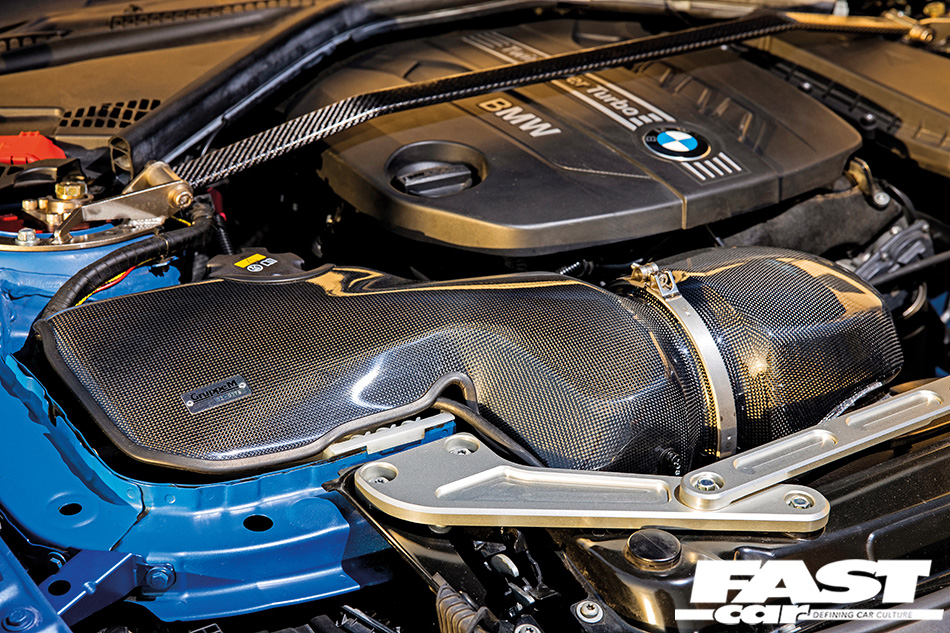 “Sure, I didn’t want to do too much to the engine, to begin with,” he recalls, “but I ended up getting a tune whereby I didn’t have to remove any of the diesel smog components. Eventually, I got a carbon GruppeM intake, deleted the DPF/EGR/SCR/DEF system and put on the Supersprint exhaust system – the car was a totally different beast, and impressively also got me more miles-per-gallon!”

With the extra power came the desire for extra stopping ability, and this led to Johnny’s favourite part of the build overall. The Endless big brake kit is a rare sight even on JDM builds as they’re so expensive, and it’s basically unheard of on modified BMWs – let alone a diesel Touring. Johnny contacted Endless to talk about the possibilities, and it turned out that quite by chance, another customer in Hawaii had requested just such a setup. So – somewhat incredibly – he was able to order the kit, making this one of only two F31s on a full front-and-rear Endless BBK. 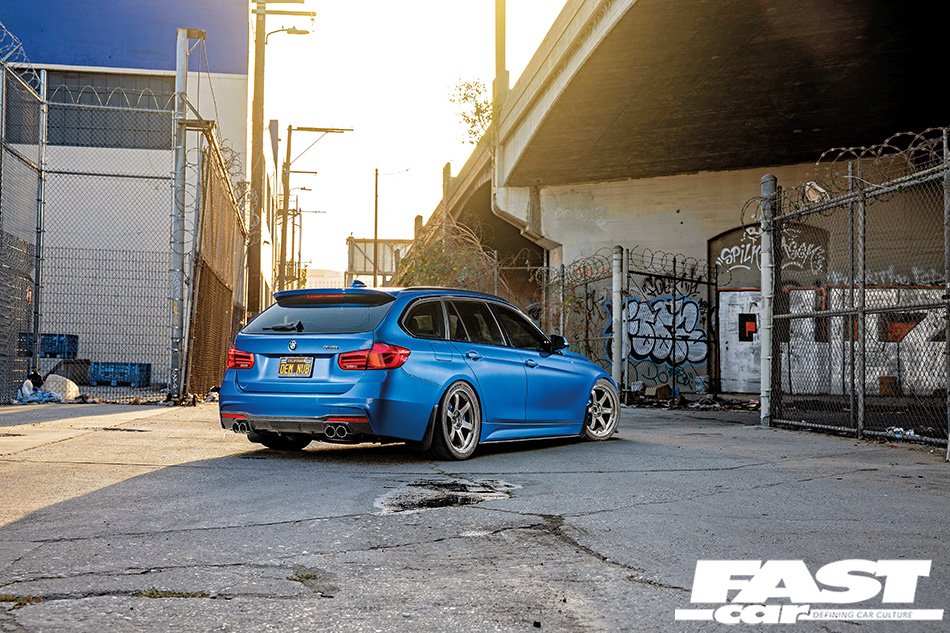 Naturally, despite these racer vibes, he had to keep the cabin civilised so as not to upset the family. And that’s where BMW’s own options lists came up trumps. “Nothing is better than OEM BMW Alcantara,” he grins. “I got pretty much all of the M Performance parts from the F8X M3/4 and 3 Series, to make sure I have all of the carbon matching. I actually bought the 3 Series parts and mixed them up with the M Alcantara items so that I could have tri-stitched parts with the matt carbon. The leather Recaro Sportster CS was always a seat I wanted, and the great folks at Brey-Krause made a kit that allowed me to use my OEM electric sliders, using a BMW E30 window switch as the control to go front and back – a perfect homage to my old E30 3 Series! The interior itself looks pretty OEM, which is the way I intended.”

It’s the open-mindedness that really makes this car special. Johnny knows what he likes, he knows what’s cool, and he’s not afraid to walk his own path. So what’s next? The modified BMW F31 Touring has actually already been put back to stock and sold, leaving space for something new. “My next car will be something electric,” smiles Johnny. See, some people just can’t sit still. And if you’re not in a silo, you’ve got so much more room to breathe.