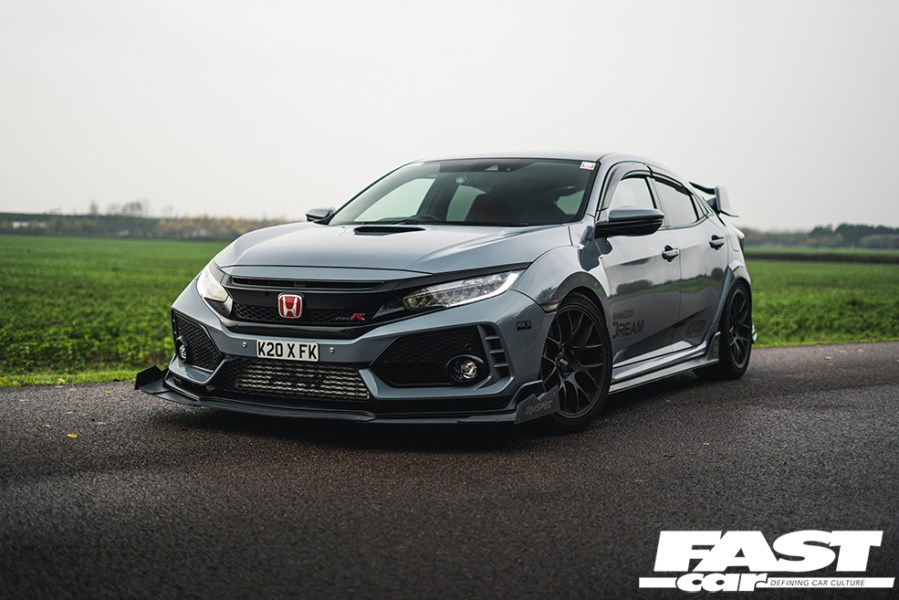 New cars can be tough to modify, but Razi has spent no time turning his FK8 into a street weapon with track personality. Check out his modified Honda Civic Type R FK8.

When the FK8 Type R was released you had the usual crowd posting GIFs of lawnmowers and the like in a bid to gather a few likes on social media. Those days of no torque are long gone thanks to the FK8s beating heart, the turbocharged 2.0-litre VTEC engine pushing out a healthy 295lb ft of torque. So what happens if you decide that isn’t enough?

Razi thought just that. Being an employee of Honda means that he’s spent a decent chunk of his time milling around with Type Rs but his passion for modifying meant the next logical step was to take a brand new base car and turn it into something that would hold it’s own against supercars on track as well as on a back road. 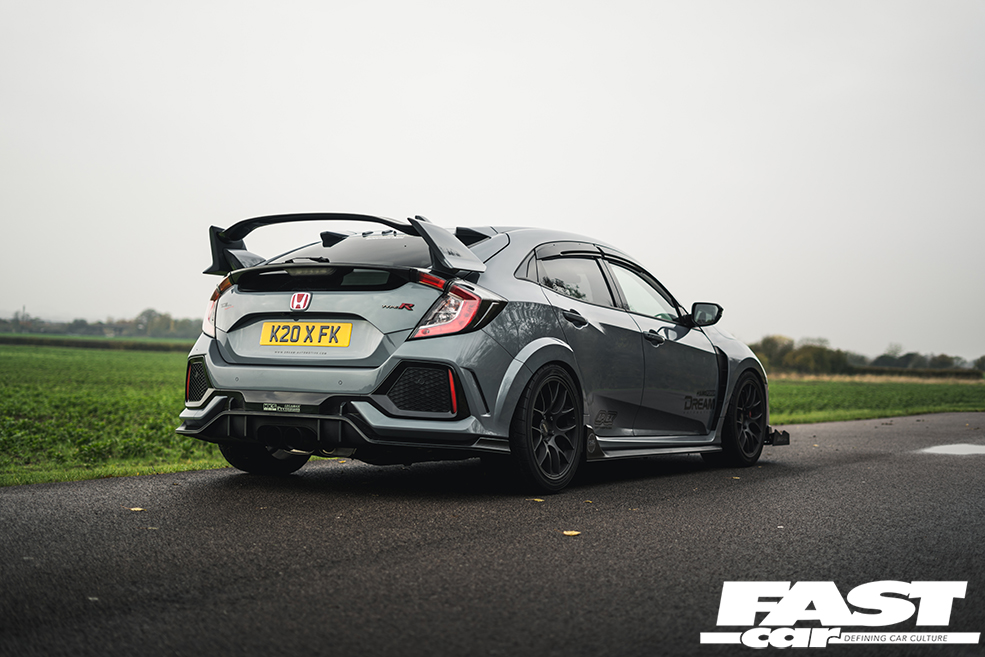 “I’ve always been into customisation and making things my own. Playing games like Need for Speed and Midnight Club really got me into modifying cars from a young age and of course The Fast and Furious has helped mould a new generation of modifiers. I started with a Civic Coupe EM1 then An EP3 CTR before making the silly mistake of buying an M135i – after that it was time to go back to my roots.” This is precisely why the FK8 was chosen, it was new, it had potential, no one was really doing it when this journey started in 2018 and it was familiar.

Risky business modifying a brand-new car though, at £30k+, it’s not a cheap car to start throwing away your warranty, which in turn means parts aren’t always the easiest to get hold of. However, it’s a Honda, if there’s a manufacturer that will always have aftermarket support, it’s Honda, but perhaps more surprising is where these parts come from. “Aftermarket support is huge with the FK8 and that’s because it’s the first CTR to be offered officially in the States. There are plenty of big brands doing extensive R&D both in the States and here; take Dream Automotive and Evasive Motorsports in the UK for example, they’re not just importing parts but also creating their own.” 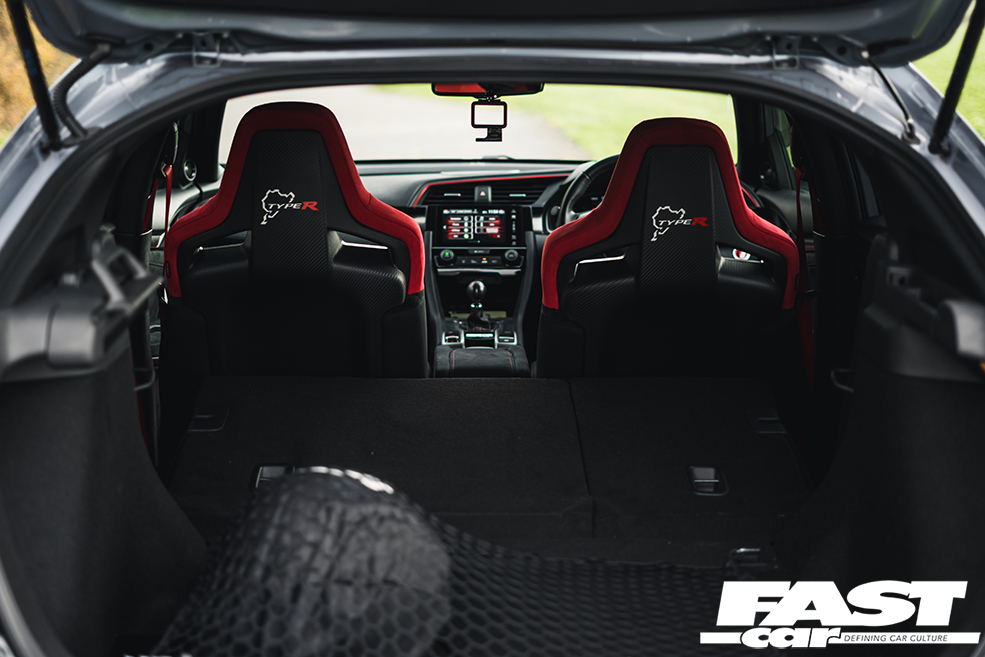 If anyone has heard a stock FK8 before you’ll understand when I say it’s the only underwhelming aspect of the car. “That exhaust was the first thing that needed to go. I had great performance but no noise.” With the bodykit as showy as it is, I know first-hand how embarrassing it is when someone asks to hear it… Razi opted for a system that eradicated the middle resonator pipe and added some meat to the show in the form of a HKS Legamax exhaust.

He then coupled that with a hardlagged cattless downpipe by Dream Automotive, which incidentally happens to be his favourite mod. It’s added in that trademark overrun pop that’s become fabled with turbo cars throughout the world. Not only that, but the hardlagging has helped control temperatures on track: “The quality on this downpipe is the best I’ve seen and it’s reassuring to know the engine bay is staying cool and that the heat management used with this downpipe is used in the highest levels of motorsport such as BTCC. I’ve noticed a big drop in temps using this downpipe.” Word of advice, those not looking to use their cars on track might opt for the downpipe without heat proofing, for the simple reason the additional material comes at a price…

Now to get the power up. Once a freer flowing exhaust was fitted, the goal was to increase air flow. Mishimoto were early with their development of intakes which meant one was ready to go. Then add in a larger PRL intercooler coupled with piping and a Ktuner V1.2 module with custom mapping by TDI North and power was up to a healthy 420bhp and 416lb ft. This is no lawnmower now, internet…

Now the real testing started. The power upgrades were great, but the car was made for track, all of the modifications were pointing towards use on track, so it was no good just ramping the power up if it become unusable. After a few tests on separate track days, temperatures became the biggest source of concern. “I had to drive on track with heaters on full to dissipate heat as quickly as possible. The extra power was lifting oil temperatures outrageously.” 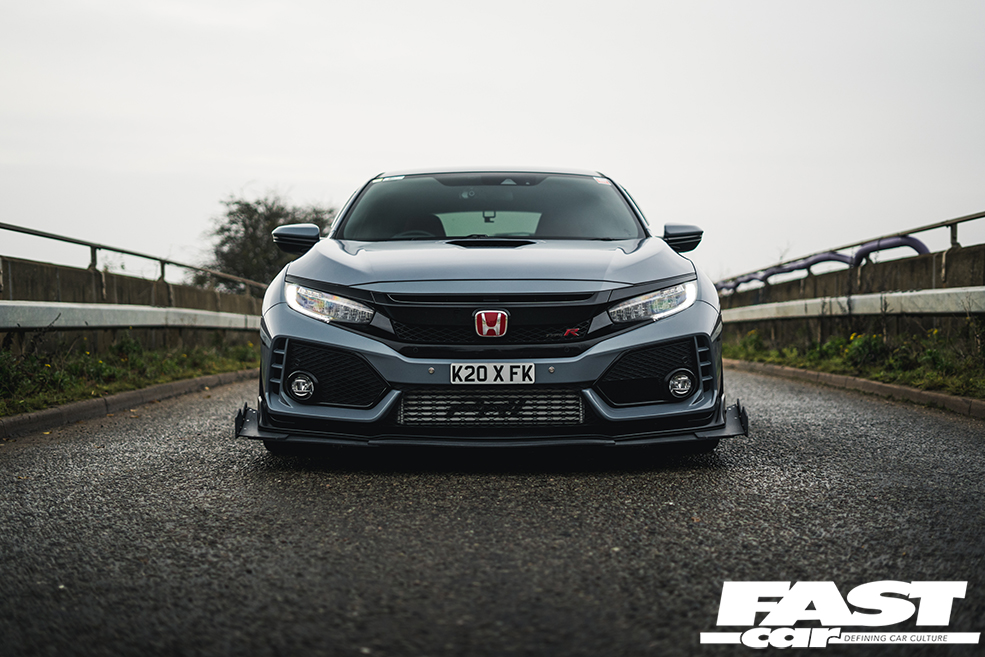 The solution? A separate HKS oil cooler, Mishimoto secondary race radiator and Koyorad primary radiator replacement. Now the full potential of the engine could be exploited without worrying about temperatures. A track day at Silverstone confirmed that fluids stayed cool throughout each session.

With the engine now satisfied, it was time to move on. Modern cars are coming with such huge brakes these days and Honda employed one of the best to sort the braking on its FK8, Brembo. In replace of the standard pads came in Ferodo DS1.11 pads to help battle against fade, while Dream braided brake lines and Motul RBF660 fluid took care of the rest. Interestingly, Razi opted to swap out the standard discs for DBA T3 discs, which are made in Australia and designed for the most extreme road and race applications. Heat shouldn’t be a problem here, then… 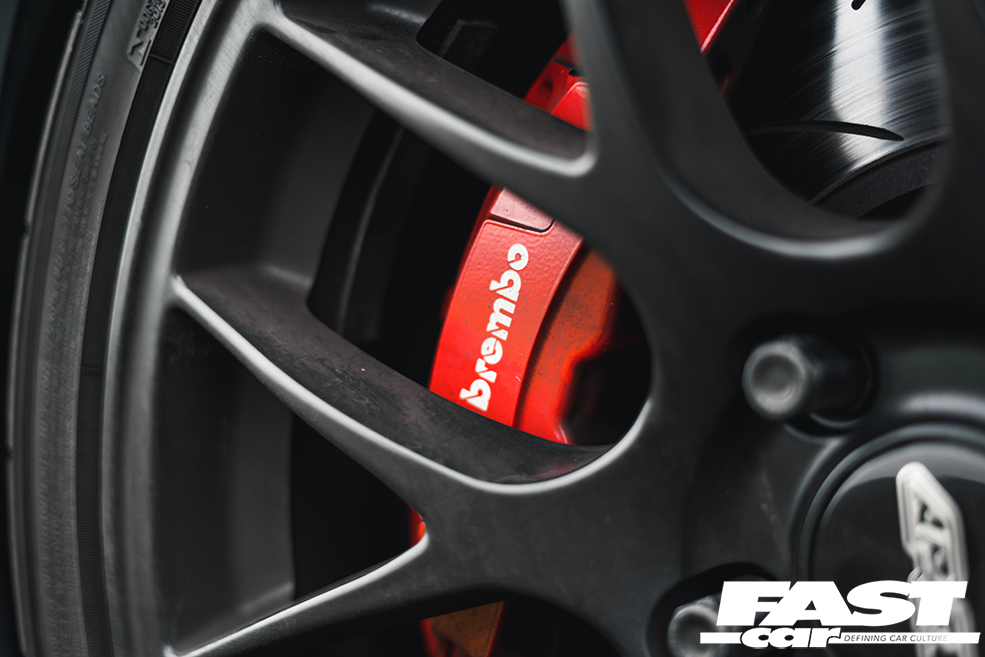 The chassis didn’t go unchanged, either. Thanks to the extra power, extra rubber was needed. Lighter Apex EC-7 18×9.5J ET43 wheels were bought all round (thanks to my suggestion!) and they were wrapped in Yokohama Advan A052 tyres for grip on track. Now the car was better able to put down the 416lb ft of torque once the tyres got up to heat. There’s no point in having 400+bhp if you can’t use it…

Still not satisfied with the corner speeds on track, Razi spoke with Dream Automotive who were running an FK8 in Time Attack and decided that by removing the camber pins they could run -2.2 degree camber at the front and -2.5 degrees at the rear to improve turn in as well as rear rotation on slower corners. This, coupled alongside Eibach lowering springs and new anti-roll bars front and rear helped to tighten up the chassis to eliminate roll all round. 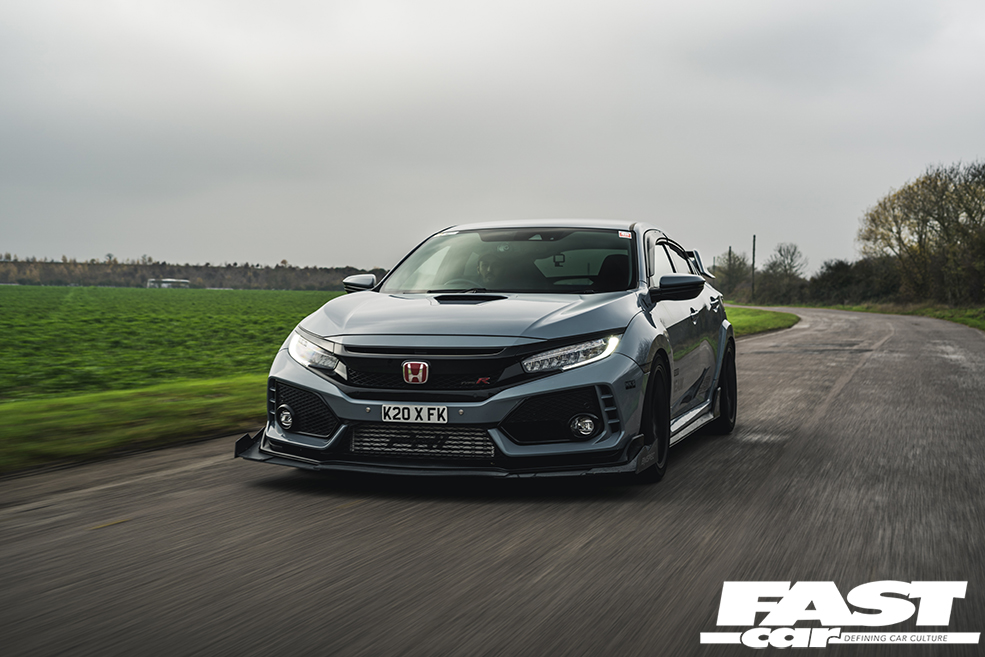 Check out that splitter; that’s the BMSpec splitter that runs flat to the front wheels. At first it looked more aesthetic than functional but through the high-speed sections at Silverstone, Razi assures us that he feels more confident after having it fitted, suggesting it not only looks the business, but it helps out with the overall purpose of this car, on track.

I’ve known Razi for the best part of two years and have seen this car grow, so it would have been rude not to tell you, the reader, what all this means on the road. Compared to a stock FK8, everything feels like it’s been ramped up to 11. Driveability hasn’t been diminished, it can still be the regular road car you want it to be, retaining the adaptive suspension. What it’s done is woken the car up, it feels more frantic, like a big dog that has the personality of a small one and wants to bark at everything. 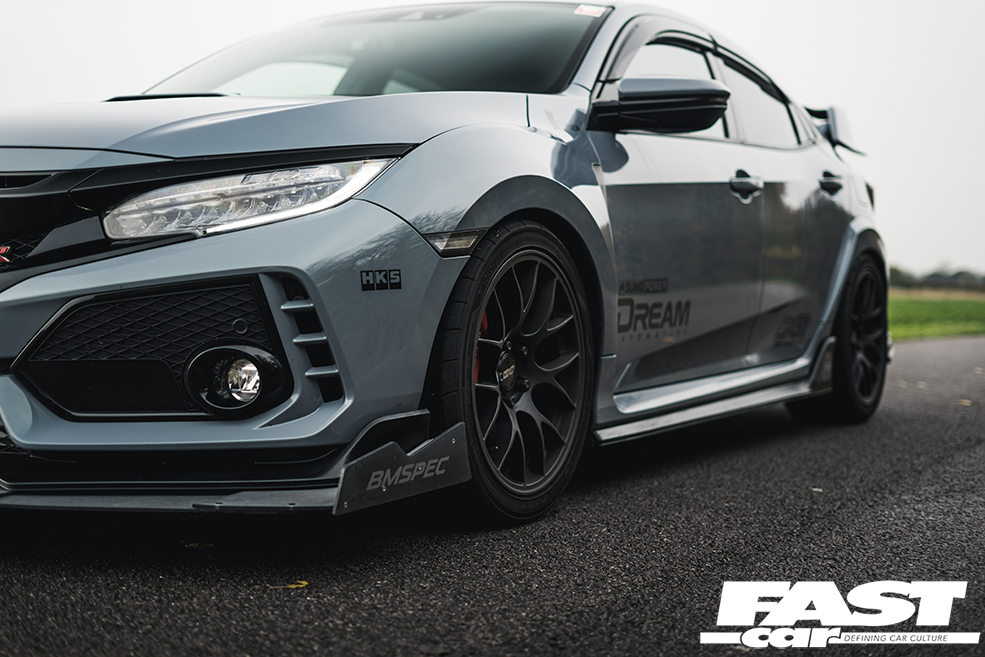 Throw it into a corner and the front end feels sharper, the rear slightly looser like it wants to rotate, but just enough to help you corner better. The power, though, it feels comfortably more than what the figures suggest. There is a downside, though, torque steer. The stock ECU simply can’t react quick enough with its inputs to the limited slip diff to direct the right amount of power to the front wheels. You do feel like you have to grip on tight, especially when overtaking. This is less of a problem on flat tracks, but on a back road with changing camber and elevation, you really have to work the wheel.

And that’s where my question about future mods leave us. “Over the winter, the Eibach Springs will be replaced with HKS Hypermax Coilovers. It will also be tuned using Syvecs ECU to take advantage of traction control and flat foot shifting.” I’m willing to bet this will transform the car to the next level, capable of embarrassing far more expensive cars on track. “After this, a roll cage and a Recaro Pole Position for safety on track. Eventually, a built motor when a good turbo and fuelling solution arrives.” So more power, then… 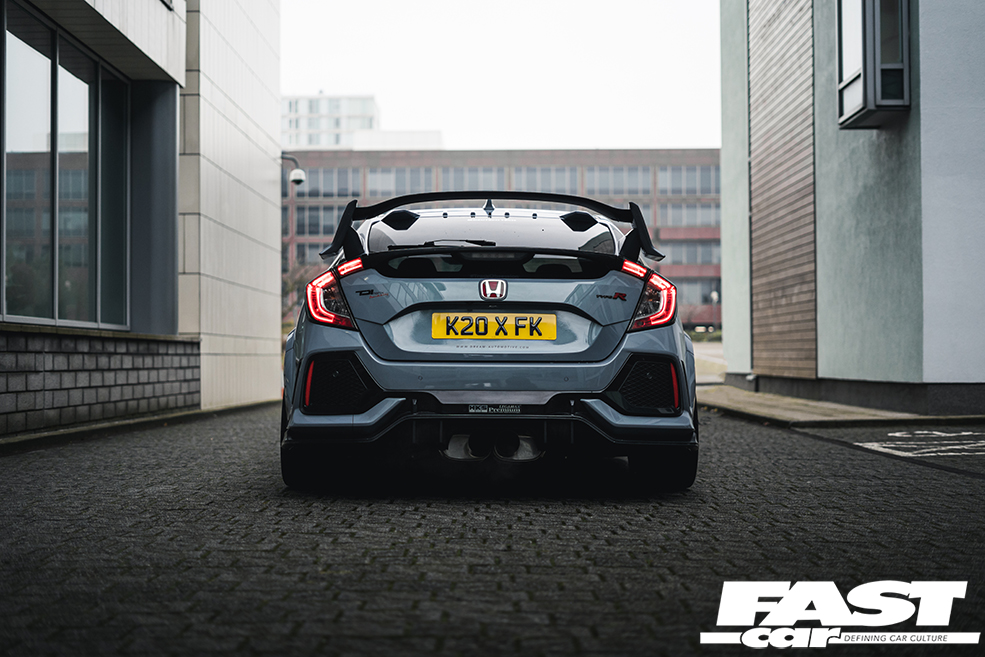 “Dream automotive and TDI North for the support”