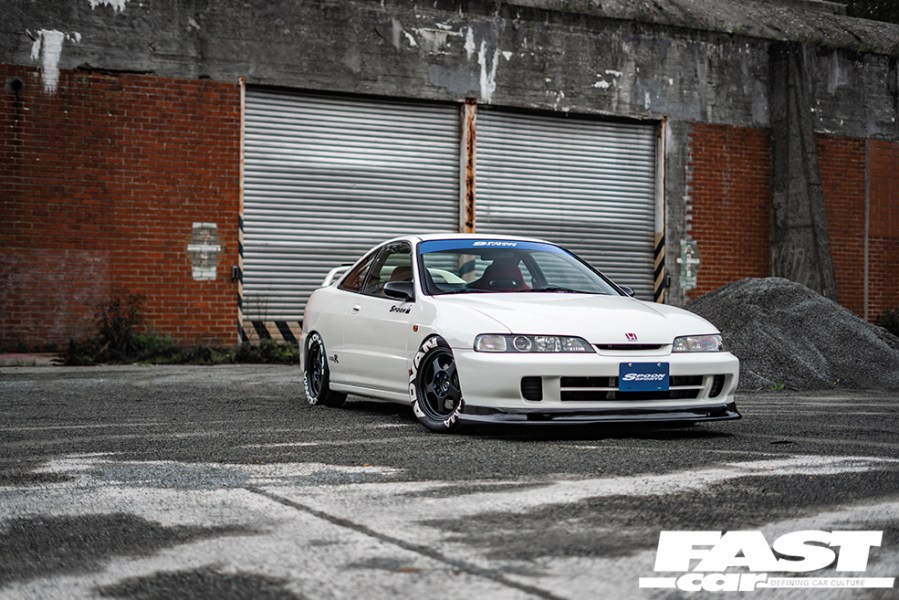 This show-stopping Spoon Integra DC2 has been a twelve-year labour of love for Michiel Roden. Taking inspiration from the iconic Spoon Sports, it’s a mixture of track-biased upgrades and scene-stealing aesthetics which slips down like a spoonful of sugar…

The ‘R’ in Type R stands for ‘racing’. We know this. When Honda were sketching out the spec list for the DC2 Integra Type R, drawing heavily on the successful format of the featherweight EK9 Civic, the idea of fusing ample power with ultra-low weight to accentuate driving dynamics was always front-of-mind. Those early Type Rs, the late-1990s models, they were uncompromising creations – so light you could practically lift them up by hand, mated to engines with such aggressive VTEC crossovers that it was like piloting a racing car down your favourite B-road.

Rewinding back a further decade or so in time, we find a fella by the name of Tatsuru Ichishima experiencing similar pangs of track-biased excitement. Ichishima-san had started his fledgling racing career in a Civic, and in 1988 he founded Spoon Sports as a specialist outfit for tuning Honda engines. As the company grew, it started developing further race-bred products and prepping entire cars for competition, until we arrive at the late-nineties (around the time the DC2 Integra was breaking onto the scene) when Spoon Sports were selling crate B-Series motors, branching out into other engine families, and offering all manner of proprietary aero parts, brake upgrades, suspension, wheels and all sorts. And the name of the company? Yes, it actually is named after a spoon… or the shape of one, at least; turn 13 at the Suzuka circuit is a long curve shaped like the head of a spoon, and it’s this legendary corner that Ichishima-san chose to name his company for. 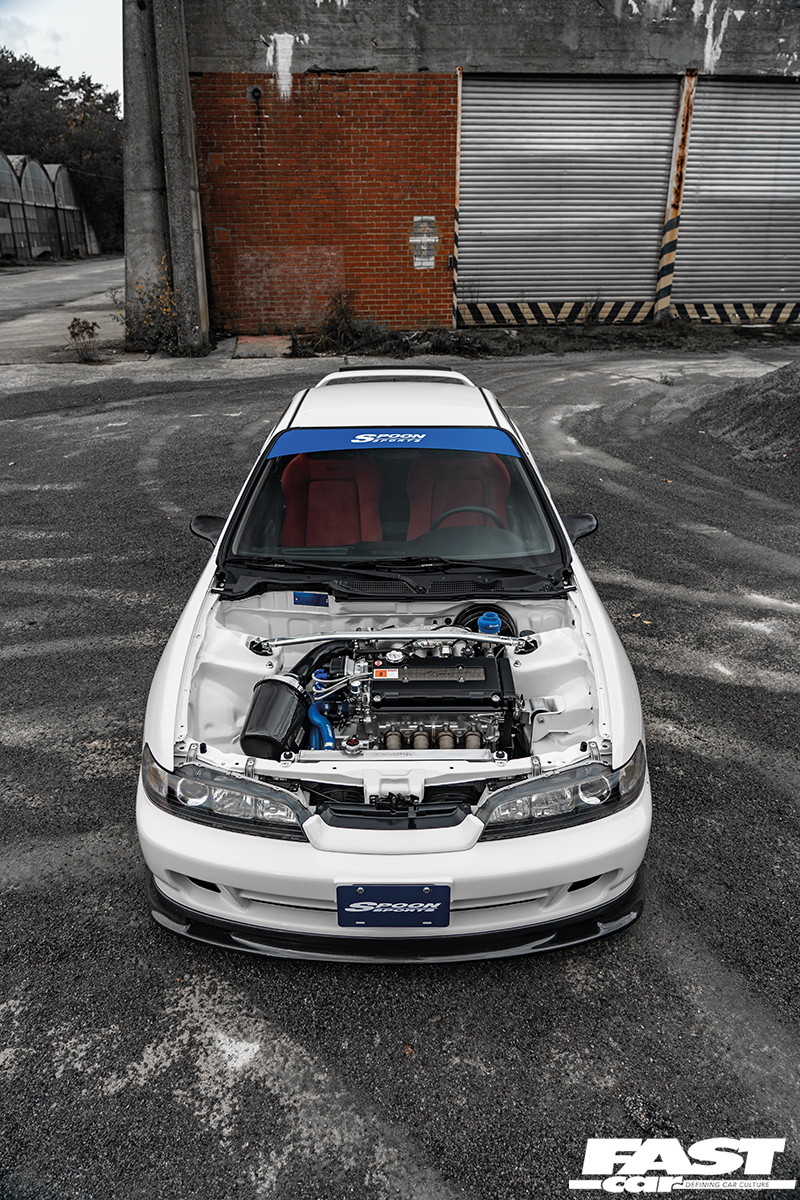 Since we’re skipping back and forth through time, let’s now fast-forward to the late-2000s, when this particular DC2 Integra Type R was around a decade old. Its Belgian owner, Michiel Roden, had certainly been paying attention to this all-pervading racer-for-the-road enthusiasm, both from Honda and Spoon Sports, and had set his sights on preserving and accentuating the glory of both. Even more impressively, this Integra was actually his very first car.

“Well, there was another cheap runabout before this that my parents bought for me to learn to drive in,” he says, “but this Type R was my first ‘proper’ car – and I’ve owned it for twelve years now.” 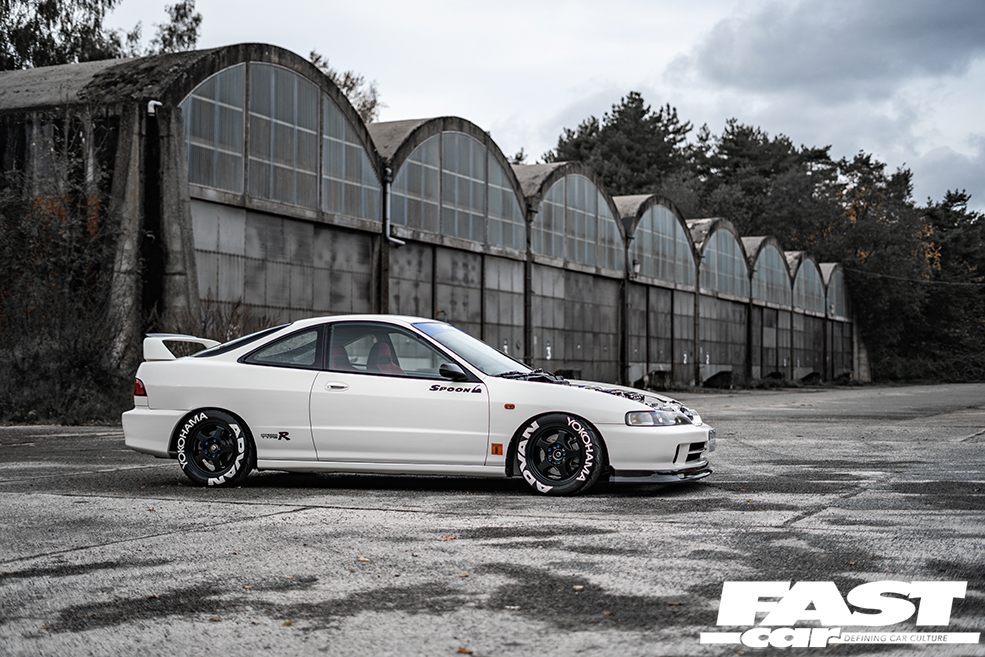 Stellar stuff indeed, as this is far more serious than most youngsters’ first cars. Naturally video games are to blame here, and Michiel readily admits that it was a childhood spent playing Need for Speed that instilled within him a deep-seated yearning for racy Japanese rides. While out searching for a car with his old man, he popped by the local Honda dealer, who just so happened to have a Championship White ’Teg on the lot, and it almost seemed like fate. And while it may have seemed like a bizarre and troubling decision to his folks at the time, the fact that Michiel’s stuck with the car for a dozen-odd years serves to highlight that he was thinking with absolute clarity.

And as if video games hadn’t proven to be enough of a sneaky influence, the good old internet knocked things up a notch. “Via Google I came across a lot of information about Spoon Sports, and various Spoon-inspired builds across the world,” he says. “These track-ready projects appealed to me immediately, although at the same time I’ve always been impressed by the super-clean engine bays of American Honda builds – so what I really wanted to do with my Integra was to combine the two. I wanted to make it show-ready, but ready to race, too”
Glancing over the photos and the specs it’s clear that he’s been successful in this goal, and the further we delve into the details the more we learn about just what a focused thinker Michiel is. Perfection is the watchword, and nothing less will suffice. “Yeah, I probably am a bit of a perfectionist,” he laughs. “And that’s what made many elements of this project so stressful. Sometimes it wasn’t easy to fit all the different parts together, and there were number of custom modifications needed here and there to tuck everything neatly. I had particularly underestimated how much effort it would take to achieve the shaved bay!” 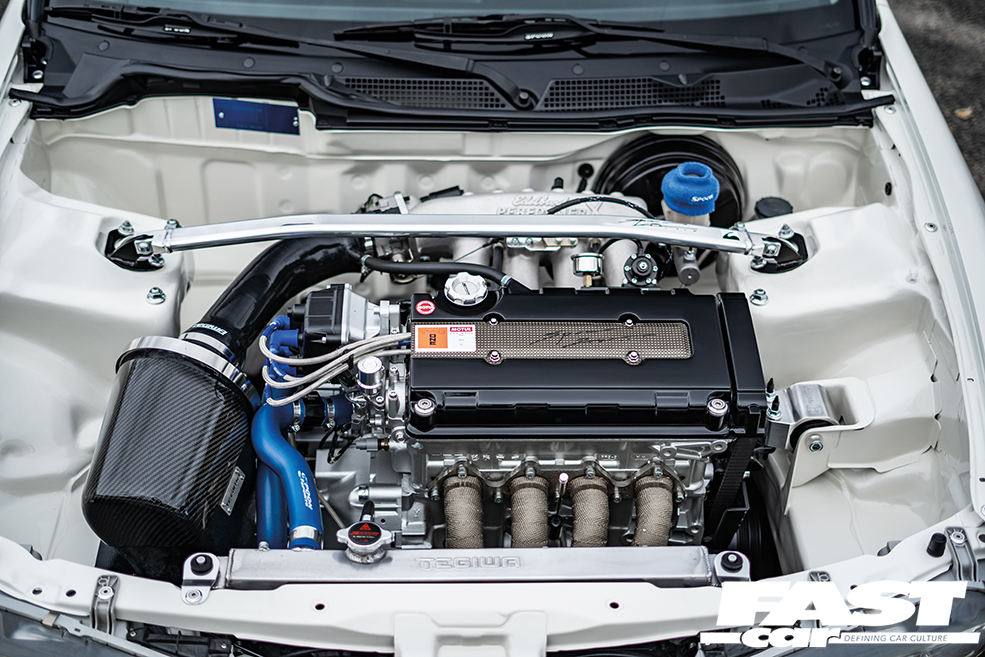 Those endless hours of welding, grinding and smoothing have paid off though, as the bay looks glorious, particularly given Michiel’s keen eye for well-chosen mods and upgrades. As well as cleaning every individual element and replacing a raft of OEM parts, ancillaries and accessories, he’s also added a Tegiwa carbon airbox, Edelbrock Performer X intake and Skunk2 throttle body, along with Spoon cams topped off with a custom chopped and shaved valve cover. The eagerness to stir in a little Spoon magic is readily evident under the bonnet, with the iconic branding apparent on the radiator hoses, plug cover and wires, oil and radiator caps, rad brackets, and the rorty exhaust system which works hand-in-hand with a PLM Tri-Y exhaust manifold. It may not be a Spoon engine per se, but the noise, the power and the vibe are all very much in-keeping with Ichishima-san’s vision.

You can’t really argue with the aggression of the aesthetics either. The shell has been fully repainted in its original NH0-code Championship White (“The perfect colour for a Type R,” Michiel reasons, and we’re not about to argue), and the Euro nose was chopped away and replaced for the more menacing JDM front end. This sports a carbon fibre Spoon lip, and he’s also added Spoon mirrors, a JDM rear bumper, and fitted a carbon extension to the OEM rear spoiler. The ever-present spectre of Spoon can indeed be found everywhere you look; those arches are filled by genuine Spoon SW388 wheels, wrapped in Advan semi-slicks to really underline the sense of purpose. The got-got-need for Nippon cutlery continues inside, as you’d probably imagine; a set of genuine Spoon seats is on the shopping list for the near future (when he can find some), but for now Michiel can enjoy his Spoon steering wheel and Spoon rear-view mirror – and of course he’s ripped out all the audio and the airbag, hashtag-because-racecar. 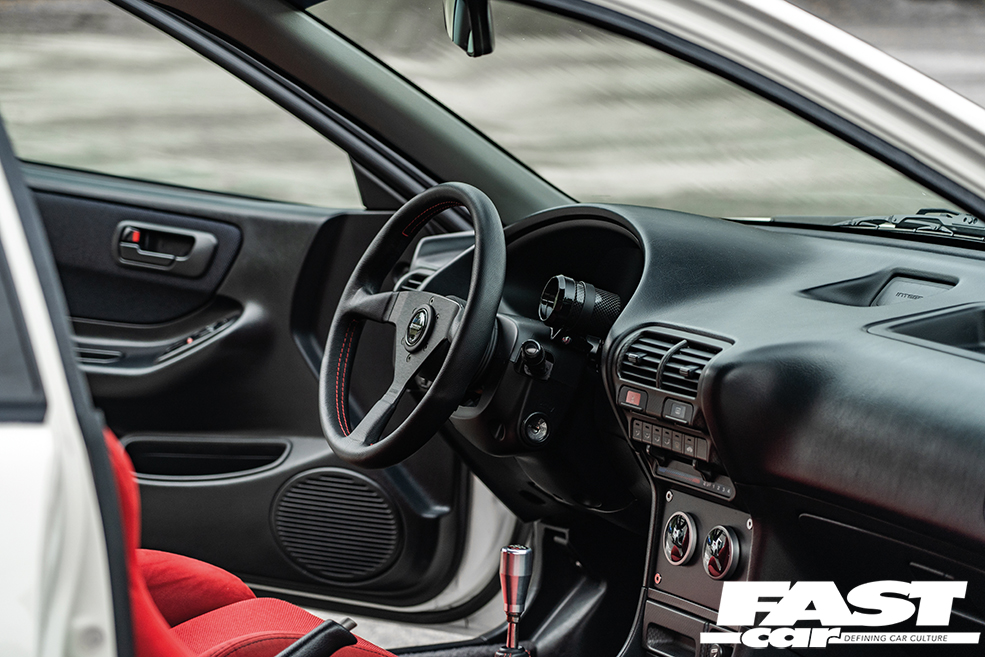 The result of all these endeavours – which have involved herculean levels of global parts-hunting – is an Integra which builds upon Honda’s own imprint of Type R majesty and kicks everything up to the next level. The Spoon DNA ensures that this hot-to-trot DC2 can more than hold its own on track, helped no end by Michiel’s addition of D2 coilovers, Hardrace front and rear camber arms, and enough fresh bushes to populate a modestly-sized forest. Everything throughout the chassis has been renewed, with every joint and bearing being boxfresh and all the arms powder-coated. He’s been a busy boy. But then, he did say he was a perfectionist…

“Shaving the bay definitely took the longest, that was a big task,” he muses. “Because I wanted to use as little filler as possible, it was time-consuming to keep all the sheet metal neat during welding. Unfortunately something went wrong while spraying the bay too, meaning that everything had to be sanded again… but the second time it was spot-on!” The form is every bit as important as the function, because this road-racer attends a whole lot of shows with his flawless creation – Honda EuroMeet in France is a must every year, as well as a lot of local meets in Belgium, and the fruits of Michiel’s labours are always keenly on display. It’s not just fellow Euro modders’ hearts he’s winning either. See that squiggle of marker pen under the bonnet? “That’s the signature of Mr. Tatsuru Ichishima, the big boss and founder of Spoon Sports,” beams Michiel, near-enough physically bursting with pride. As well he deserves to. “During the 2018 edition of Honda EuroMeet, I had the unique opportunity to meet Ichishima-san in person. This was a great honour for me, and he even found the time to sign my Integra, concluding with the words ‘nice car’.” And from such a revered figure, there really is no higher praise. Michiel had been aspiring to the beguiling track-bred wiles of the Spoon Sports legend from the very start; the fact that his own Spoon tribute has earned the approval of the founder himself can be considered very much mission accomplished. He strove for perfection, and now Michiel has had it all signed off by the boss. 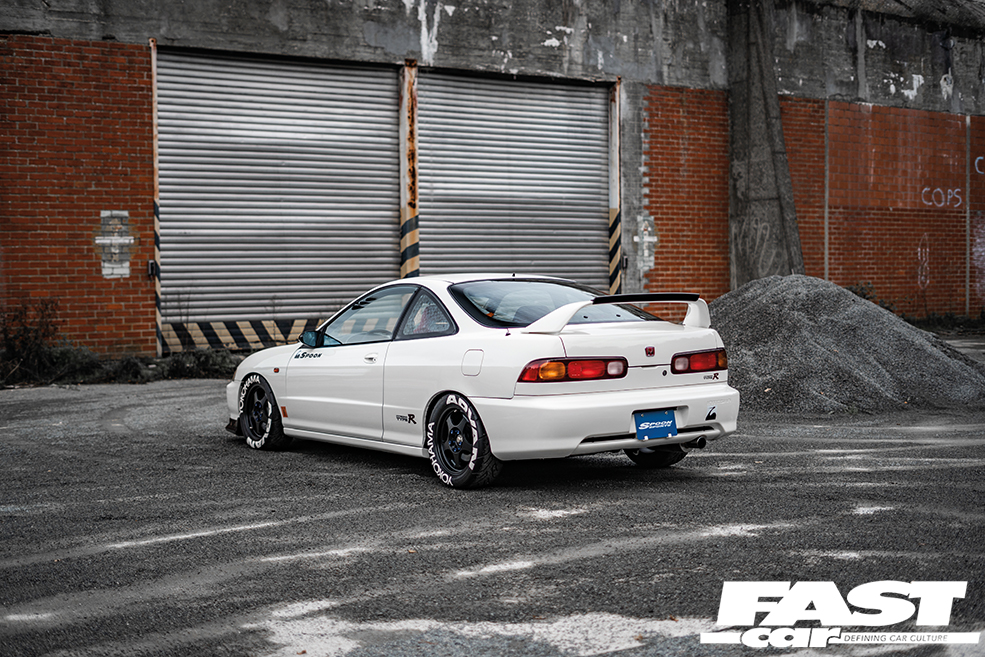