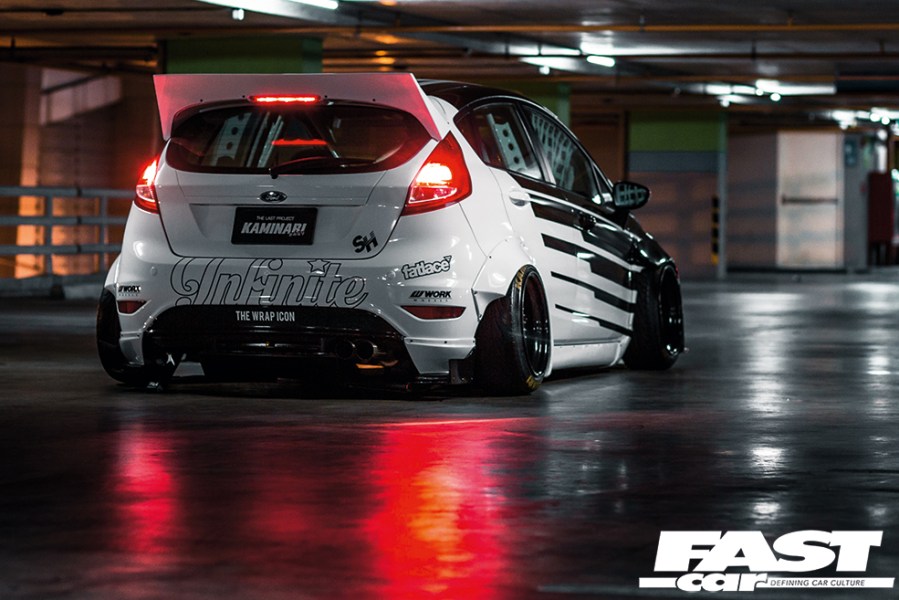 Thought the Rocket Bunny treatment was reserved for sporty Japanese coupés? Kampol Hasoontree’s bespoke Mk7 Fiesta is out to prove the same magic can be applied to pretty much any car if you only put your mind to it…

As well as Brexit, the F1 season and Midge’s fashion sense, there’s another heavily debated topic we’ve been trying to get to the bottom of here in the FC office for many, many months now: just why exactly is the Thailand car tuning scene blowing up at the moment?

You see, it might be a relatively small country not known for manufacturing many of its own particularly memorable cars. But this hasn’t stopped us from witnessing some of the most satisfyingly accomplished modified vehicles coming out of here in recent years. It was only when images of this tasty Bangkok-based Ford Fiesta of young Kampol Hasoontree arrived in our inbox recently that we began to finally piece together the answer. And it revolves around this: Thai car owners really do like to live by the phrase ‘nothing is impossible’ – more, perhaps, than any other nation…

The first question we need to ask ourselves when admiring this incredibly unique hatchback is just why Kampol decided to settle on this rather unlikely European Fiesta in the first place?

Thailand is best known for its JDM offerings when it comes to stanced-out street stonkers and their respective modifications, but this compact Ford isn’t as random a choice as you might first think. You see, the country actually built this car to its very own specifications a few years back, meaning they’re more popular here than you might imagine.

It also means Kampol was able to snap up his hatch with the fairly pokey and boosted 1.5-litre Ti-VCT motor, as well as a celebrated PowerShift dual-clutch ‘box straight from the factory, making it the perfect base car for a young person looking to begin their debut build with.

Sure, it isn’t a Nissan Silvia or a Toyota Supra, but thankfully this didn’t do anything to deter Kampol from beginning to express his well-thought-out style on his latest purchase straight away. He’s applied the same quality touches these more popular cars often receive and ended up with something far more unique as a result of such great vision – as we’re about to find out.

The humble Fiesta might be a popular car for people like your mum to nip to Asda in, but it’s worth reminding ourselves – just like Kampol did – that it’s also gained some pretty impressive street cred in recent years. As well as smashing the Rallycross stages in the hands of drivers such as a certain Mr Block it’s been winning awards left, right and centre in the form of the unrivalled ST road car. That’s why, despite not having tons of off-the-shelf parts available compared to other models, Kampol was determined to build up a formidable show stopper, going to fully bespoke lengths wherever required to make it happen.

“I really liked the Rocket Bunny style, but couldn’t find anything relevant to the Fiesta from the brand,” he begins. No bother, though, as a quick trip to the legendary Mard Body garage to the north of Bangkok, followed by some detailed talks with the team, soon saw the mother of all exterior conversions take shape.

Chopping and choosing Rocket Bunny-branded parts from other vehicles, Mard Body was able to whip up its own take on a similar kit for the Fiesta, complete with all of the vents, splitters and, of course, riveted-on wide arch extensions that we’ve come to know and love from this Japanese styling company. Set off with all-important touches such as the aggressive ducktail roof spoiler and abrupt shotgun-style exhaust system, and it was soon clear to see this uber-JDM style was indeed going to work perfectly on this car too.

Once the shut lines and panel gaps were tweaked to perfection and the kit was looking fresh-to-death when sprayed up in a body-matching white hue, Kampol could next be found rolling his pride and joy around the corner to The Wrap Icon, who was waiting to get its talented hands on the car.

Soon sporting this eye-catching, black-to-white, race-inspired vinyl livery on its muscular flanks, there was no doubt in anybody’s mind by this stage that this was one Fiesta project which was being taken much further than most would ever dream of.

The final piece of the exterior puzzle was choosing the right wheels to take pride of place under the incredibly capacious arches. A self-confessed wheel connoisseur, Kampol wasn’t going to accept anything less than perfection here, eventually opting for some super-rare WORK-built Modex Deerfield splits. With their chunky and functional five spokes and full nine inches of girth, they give off hints of that Rallycross stance the rest of the package so effortlessly offers
up now.

Talking of Rallycross, the interior has been treated to an equally-as-brutal and motorsport-inspired overhaul, stripped of all its creature comforts and applied with a heavily-gusseted roll cage, as well as checker-plate footrest plates, from the guys at Mard Body.

With some Bride recliners, a JDM steering wheel and even that rally-style window netting also making an appearance, this is one cockpit that you can be certain even Ken Block would feel comfortable spending some time in.

Offering around 111bhp from the word go, Kampol’s treated his pokey turbocharged motor up front to some subtle enhancements, not least a K&N air filter and a straight-through custom exhaust system that finishes in a dual shotgun-style crescendo jutting aggressively from the bodywork at the back.

These alterations have so far proven to be the perfect way to open up a little more from this nippy package, but there is whispers of larger turbochargers making an appearance not too far down the line.

The fact Mard Body has been bombarded to replicate this killer kit by countless other Fiesta owners since Kampol’s now very-famous car has smashed the show scene, it goes without saying that this is one car that’s successfully gone down a storm for all the right reasons.

So next time you get a crazy idea in your head, it’s worth reminding yourself of this inspirational story and the fact that anything is indeed possible if you only put your mind to it…