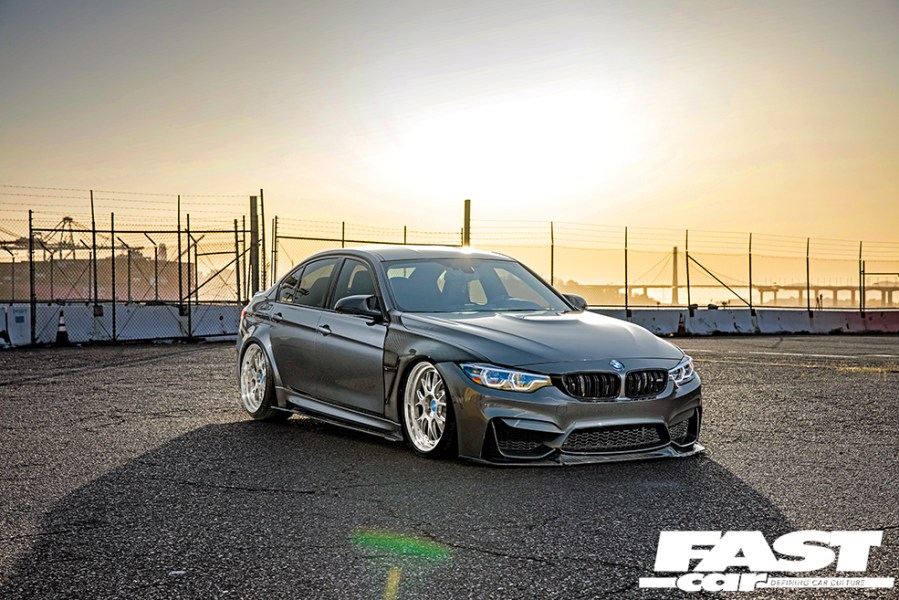 Sharp styling, lashings of carbon fibre, bagged, killer wheels and a blistering 530hp make this stunning F80 M3 the perfect pick me up.

The Phillips and Phillips-penned masterpiece, “California Dreamin’” was made famous by the Mamas and the Papas when they released it as a single in 1965. The whimsical ballad heralded the ‘Californian sound’ that would shape the next decade of the American musical landscape. The song was actually written in a freezing New York and captures the longing for a sun-kissed Los Angeles summer. In much the same way, as this article is being typed up on a delayed train bound for a rainy Glasgow on a bracing Scottish morning, concentrating on this amazing bagged F80 M3 while gawping at the San Jose backdrop of the photos seems like the perfect antidote.

The lucky owner of this winter warmer is 34-year-old strategic performance marketing manager Christian Dior De Jesus (@f80_dior91), for whom the Californian dream started at a very young age. “My dad brought home an E36 M3 in 1993. He was testing it out as this was the demo car for customers at the dealership where he was the Sales Manager. I knew from this point onward that, one day, I would own an M3,” he grins. 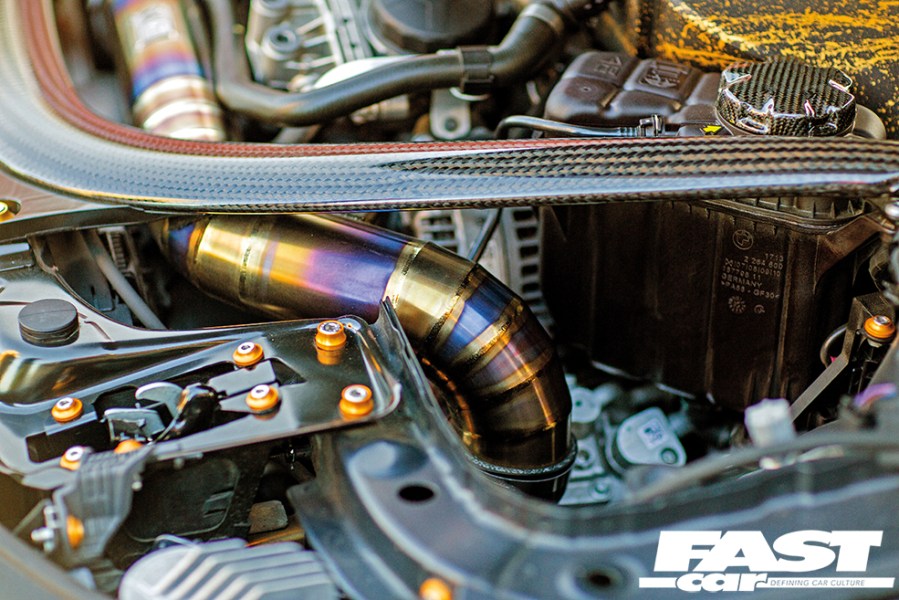 Christian’s own car history started when he was just 16 with a then-fashionable 2004 Acura RSX in Desert Silver Metallic. This was duly modified with a JDM and carbon fibre theme: “I did all the basics like exhaust, headers, intake, lowering springs, and wheels off of my high school allowance. When I got my first job, I got a pair of Type R DC2 seats in red and began to make more cosmetic additions like a full lip kit from C-West, Buddy Club carbon fibre hood, and VIS carbon fibre trunk. I took it to all the local car shows and competed with a local team.” This fairly serious foray into Far Eastern delights was halted abruptly after the car hydroplaned and was written off in the resulting crash. Bavaria soon came knocking though in the shape of a 2006 E90 325i, which was run through college as Christian concentrated on his studies and thus remained stock until being passed on to his mother.

Hard work and saving realised the M3 dream three years ago in the shape of this 2018 BMW F80 M3 Competition Package in Mineral grey. “I decided on the F80 M3 because a four-door future-proofed the build with the possibility of children on the horizon,” says Christian. “I also like the way the rear fenders flare out in a more pronounced fashion than the F82. The icing on the cake for me was the tuneable twin-turbo straight-six peach of an engine. I had always wanted forced induction,” he adds with a smile. Christian’s father joined the hunt for a suitable example, and this car was located in the Mountain View BMW Dealership in California. Brand new with just five miles on the odometer, it represented a blank canvass, while the exceedingly generous spec sealed the deal.

“My original plan was to keep the vehicle completely stock and enjoy it for what it was, but that changed within two months when a wheel company that needed M3s to showcase their wheels reached out to me. After that, the mod bug took hold, and down the rabbit hole I went with modifications,” grins Christian, and first up on said slippery slope of enhancements was the styling. 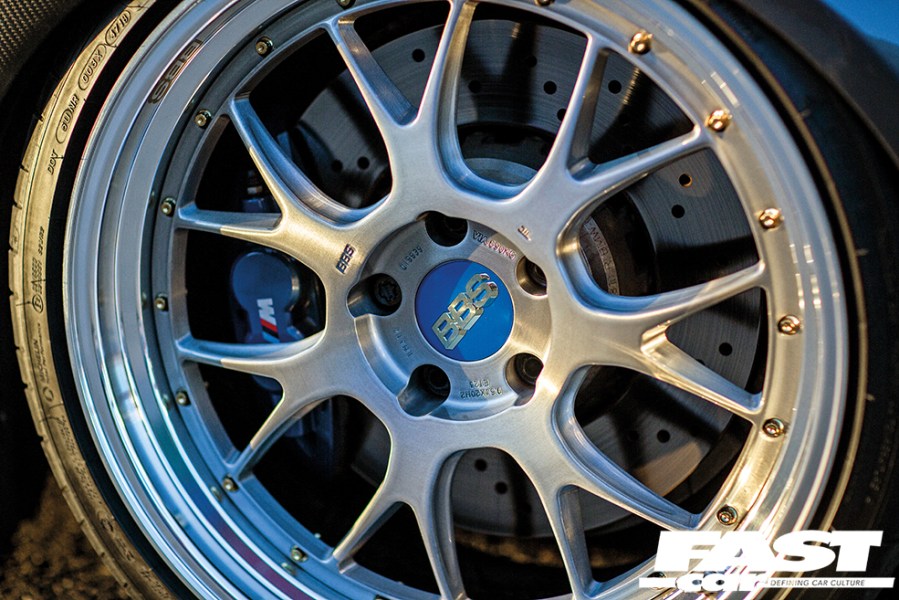 The front end sports a Dinmann carbon fibre lip paired with M Performance lower splitters, while the headlights are accented with Silicon Valley Bimmer carbon fibre eyelids. The stock front arches were removed and replaced with Dinmann’s full carbon fibre items which dominate the motorsport-inspired, high-end flavour. Carbon side blades from Morph Auto Design and the M Performance mirror caps combine to enhance the side profile. A 3D Design boot lid spoiler and Kohlenstoff carbon diffuser take up the rear gunner position, ensuring that the weaved wonder stuff theme flows from end to end. “I had a theme in mind with the exterior styling of the car. I knew I wanted to go with carbon fibre, and I really rate Dinmann’s quality and style,” Christian explains.

Germanic motorsport heritage and a sponsorship deal saw Christian swapping from his previous wheels to a set of BBSs. The 20” LM-Rs work so well in the custom hand-brushed aluminium finish with gold plated titanium fasteners, and measuring in at 9.5”-wide at the front and 11” across at the rear, they dominate the on-point stance, while generously proportioned Michelin Pilot Sport 4s do their best to lay down the power. 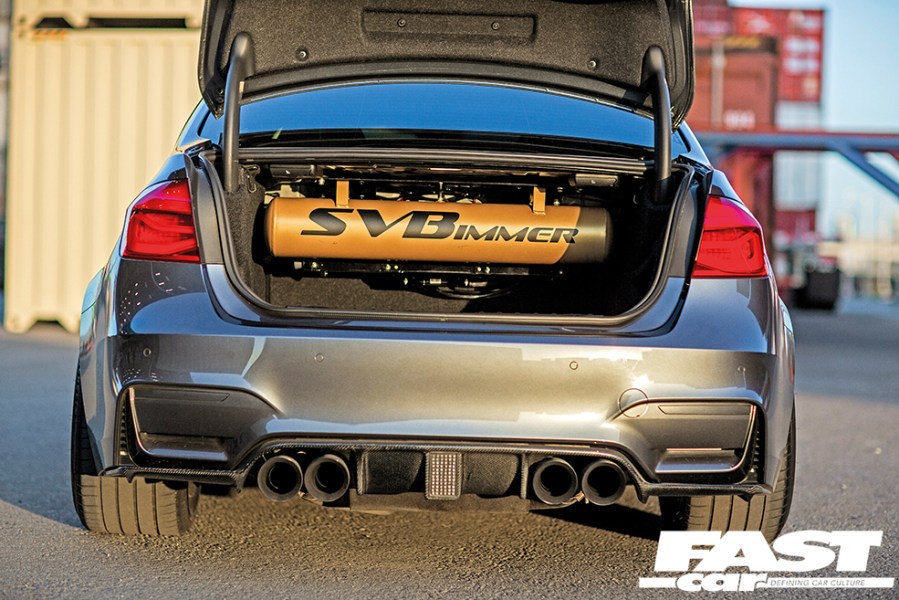 Next up on Christian’s to-do list was the suspension, and while he’d been running static, those non-adjustable lows had taken their toll. “I moved from having a coilover setup to air suspension. Air Lift Performance was generous enough to sponsor me with its 3H system. A big reason for going with Air Lift was the practicality of being able to adjust the ride height so I could clear steep driveways and high speed bumps so I no longer broke the carbon fibre front lips. I went through four different splitters when the car was static,” grimaces Christian. “I’ve been pleasantly surprised with the handling, and the first time out on track, it felt planted and handled just as well as it did on coilovers,” he adds, so it was clearly the right move.

With all that carbon covering the exterior, it’s no surprise to see that the carbon fibre theme continues into the inviting cabin. “For the interior, I wanted to keep an OEM+ look which is why I opted for all M Performance parts aside from the additional carbon goodies from Dinmann that complement the OEM carbon,” explains Christian. The original leather heated steering wheel was swapped out for the full Alcantara CS item paired with the M Performance carbon trim, accented with IND Distribution’s Polar Blue M1 and M2 buttons, while the black OEM start-stop button was also upgraded to match these. The steering column was swapped out in favour of the Dinmann replacement carbon fibre item, and the Dinmann catalogue was once again utilised for the carbon fibre media console trim and carbon seatbacks with M tricolour pinstriping. These look perfectly at home with the matching rear centre console, while the M Performance carbon handbrake and Alcantara gear gaiter with signature M tricolour stitching ties in the seatbelts. 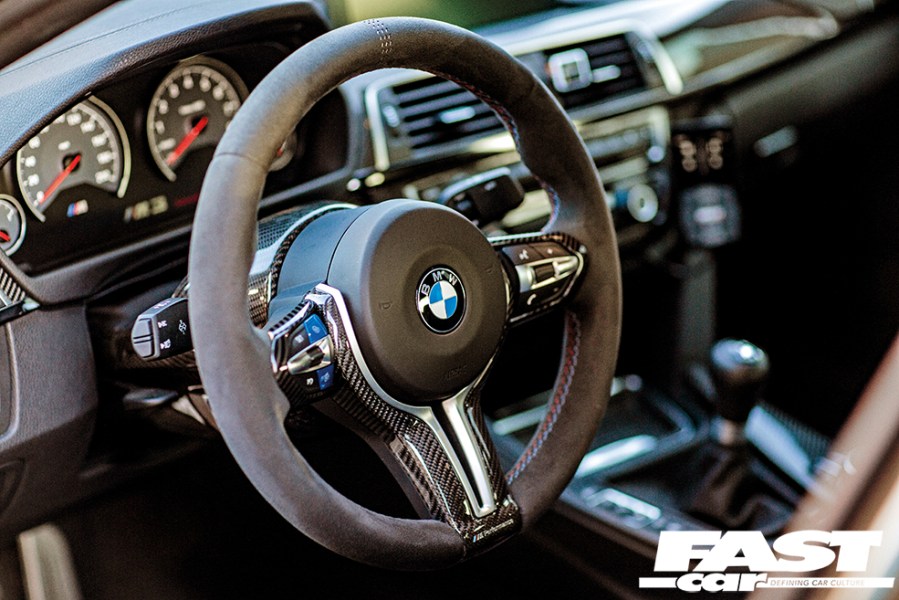 With an aggressive but classy exterior and an OEM+ interior, the engine bay is home to some more top-flight componentry, but Christian has opted for custom finishes that bring a sense of fun to the build. The bay is dressed up with Goldenwrench’s cap set, while the intakes and charge pipes were upgraded to titanium with a blue, gold, and purple zebra design by RK Titanium. “I chose these items because of the eye candy element and quality craftsmanship. Each piece is handmade, and the resulting amplification of the induction noise is addictive,” says Christian.

The intakes are front-mounted for improved airflow, and blue air filters are purposely visible through the front kidney grilles, while an uprated CSF chargecooler was added and is custom-finished with gold splatter. “CSF is a top brand in the F8x community and being able to have them customise the chargecooler for a one-off look was important to me,” Christian tells us, and gold bolts by Downstar tie in the custom pieces with aplomb. Proven Mishimoto cooling components keep the fiery straight-six cool; Christian has fitted their upgraded heat exchanger, oil cooler, and oil catch can which all work in harmony. The OEM downpipes were replaced with VRSF cat-less items which are mated to AWE Tuning’s SwitchPath exhaust system with 102mm tips finished in black diamond, and this delivers an aggressive, raw sound that suits the performance and looks of the car. Finally, a Pro Tuning Freaks BM3 Stage 2 OTS tune optimises the gains from the aforementioned performance items, and the end result of all those mods is a very healthy 530hp and 500lb ft of torque for this bagged F80 M3. 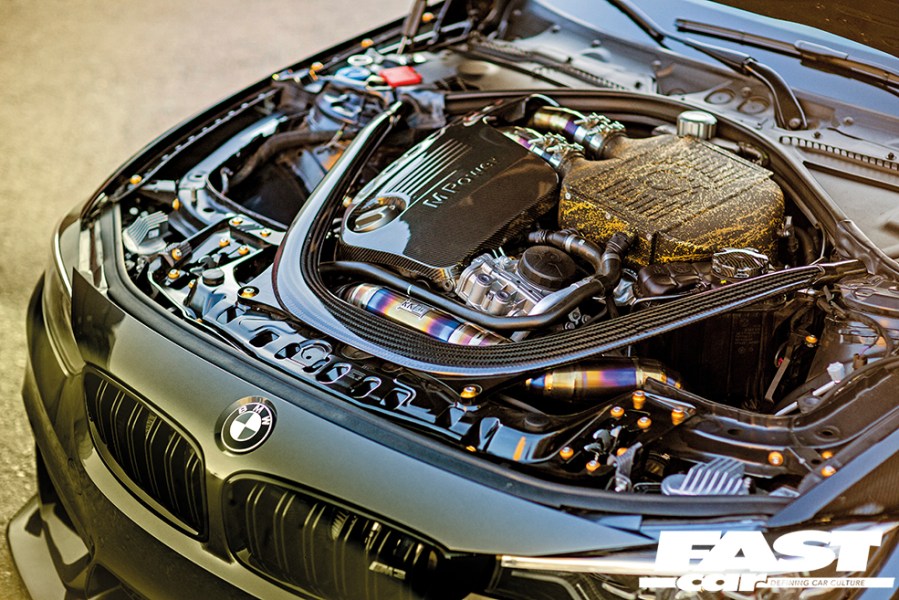 On a build that is so comprehensive, it’s difficult for Christian to pick one stand out favourite modification, but he has a shortlist of parts that he feels really make the bagged F80 M3 stand out. “On the exterior, it would be the Dinmann carbon fenders, they are a head-turning mod, and since the car is dark it adds a nice contrast to the look and flows well with the other carbon bits. In the engine bay, it would be the RK Titanium front-mount intakes. The induction sound when you downshift and do a pull is so addictive! In the interior, I would have to say it’s the CS steering wheel as it has a noticeably better feel over the standard item on a spirited run,” he says. Justifiably so, Christian is truly happy with how his bagged F80 M3 has turned out, and while he has some dream, money-no-object mods in mind, this build is done. Christian is now eyeing up his next car and has a list of eligible candidates, including the Porsche 991 911, G80 M3, or F90 M5. Whatever he decides on, “The modifications will be limited to just wheels and suspension,” he says. With his reputation, he must be California dreamin’… 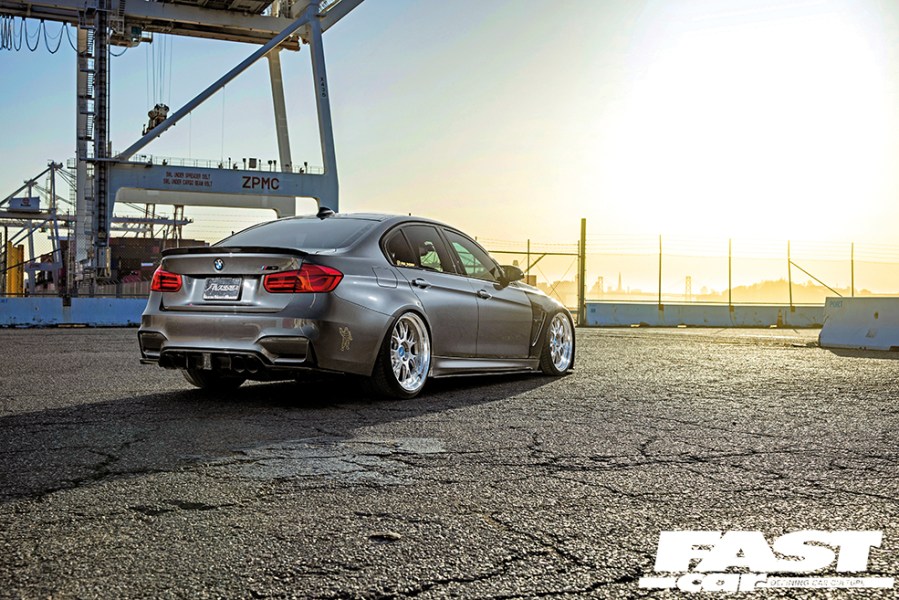