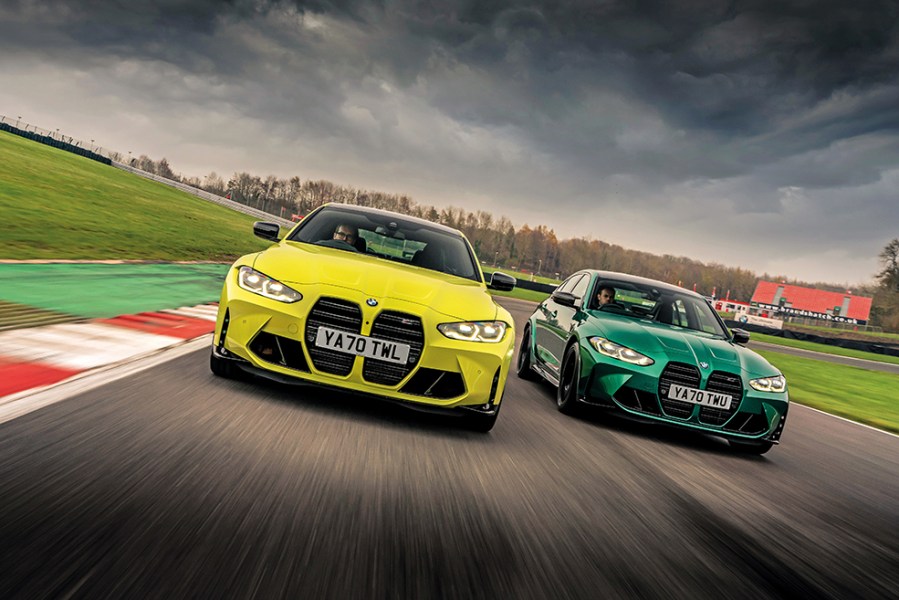 We sample the mighty new BMW M3 G80 and M4 G82 Competition models back-to-back to see how they stack up and which one we’d be taking home.

This is the fourth time in the history of the M3 that lucky buyers have been put in the position of having to decide between two- or four-doors on their M machine. Before we begin on the technical aspects, things look ominously weighted against the M4 Competition. For starters, it’s £1300 more expensive than the M3 Competition, and it’s obviously less practical with fewer doors and a boot that’s smaller by 40-litres and that matters in a car that has everyday appeal. It would help if the M4 were stunning to behold, but both M cars wear BMW’s controversial new front grille – styling is subjective and beauty is in the eye of the beholder and all that so we’ll leave that part of the car alone. Beyond the A-pillar, the M3 is the more cohesive piece of styling. Its rear flanks are less weighty, it has a tauter design to the rear, the back arches are more muscled and appealing, and proportionally it just works better in our eyes. You might think different, true, but surely no one could successfully argue that the M4 is strikingly attractive enough to convincingly walk a beauty contest between it and the M3 to justify its higher asking price.

Before we go any further we have to mention the colour palette, because BMW has served up some seriously sexy shades for its latest M offerings. Alpine white and the signature Sao Paulo yellow (this one’s got some Dakar vibes to it) are the two solid choices for no cost, while moving into the metallics there’s Portimao blue, Toronto red and Isle of Man green to go for, with a couple of greys and a black also on the cards. If that’s not enough and you fancy something a bit more special then how about Dravit or Oxide grey, or Individual Tanzanite blue II (all of which are £1100), and then you’ve got Frozen Portimao blue (£2985) or Brilliant white (£3985), so there’s something to suit all tastes and pocket depths. 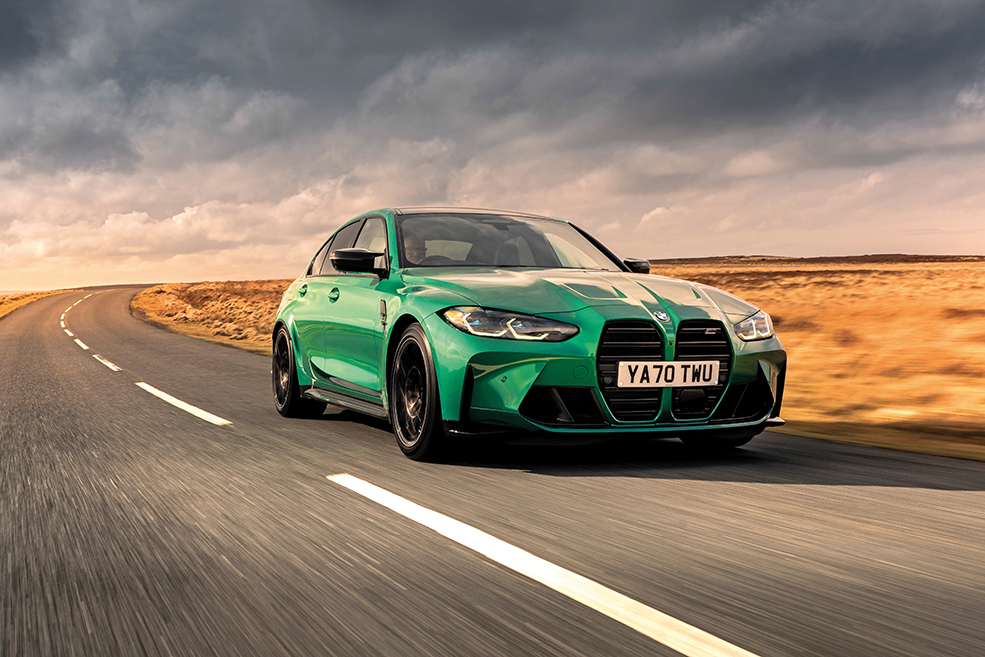 Moving inside, there’s precious little to separate the two if you’re sitting in the front. Naturally, adults will prefer to be in the back of the BMW M3 G80 than the G82 M4, simply because getting into the second row of seats is a lot easier, but the M4 offers plenty of rear passenger space. However, up front, both cars are superb. Pay £6750 for the M Carbon Pack and not only do you get a carbon boot lip spoiler, door mirror caps plus various vents and intakes, but also the most exquisite M Carbon bucket seats. These things are terrific, even accounting for that odd bit of carbon that’s positioned centre-front of the squab.

Stunning carbon shift paddles, a spot-on driving position, a perfect steering wheel that’s not too thick and various M-specific accoutrements, displays and switchgear help lift the cabin ambience of the 3- and 4 Series to levels befitting cars in the £70,000-plus bracket. The M Head-Up Display and the better-resolved digital instrument cluster with an M Mode single-dial graphical interface are both excellent at conveying information quickly to the driver who’s in a hurry, so in terms of ergonomics, appearance and star quality, the cabins of the M3 and M4 Competition have got all the main disciplines sorted.

While there will be non-Competition models of the M3 and M4 sold in left-hand-drive markets, here in the UK we just get the Competitions. This means the 510hp/480lb ft variant of the new S58 twin-turbo straight-six 3.0-litre powerplant and those are some serious numbers. To try and corral such turbocharged thump, the dual-clutch gearbox has been abandoned in favour of the M Steptronic already seen in the F90 M5 and the G15 M8 Competition. Yes, that’s a traditional torque-converter gearbox, which might seem odd in a full M car, but it has worked perfectly fine in the two V8 Ms already mentioned, so it shouldn’t struggle in the six-cylinder M3 and M4 twins. Elsewhere, there’s an Active M Differential to apportion torque out 100% to either rear wheel on the trailing axle, new software that allows 10 different settings of traction-control intervention, and also the much-talked-about M Drift Analyser, though we didn’t try that one on the road.

BMW has fitted the Competition models with 19s on the front axle and 20s on the rear. These are wrapped in Michelin Pilot Sport 4 tyres as standard, but you can opt for Cup 2 rubber if you need more track day grip. Further, an M Pro Pack for £7995 brings in carbon-ceramic brakes (with gold calipers) and a speed limiter increase to 180mph, although you can choose between red, blue and black calipers on the standard stoppers to give more eye-catching detail behind the spokes of the wheels. 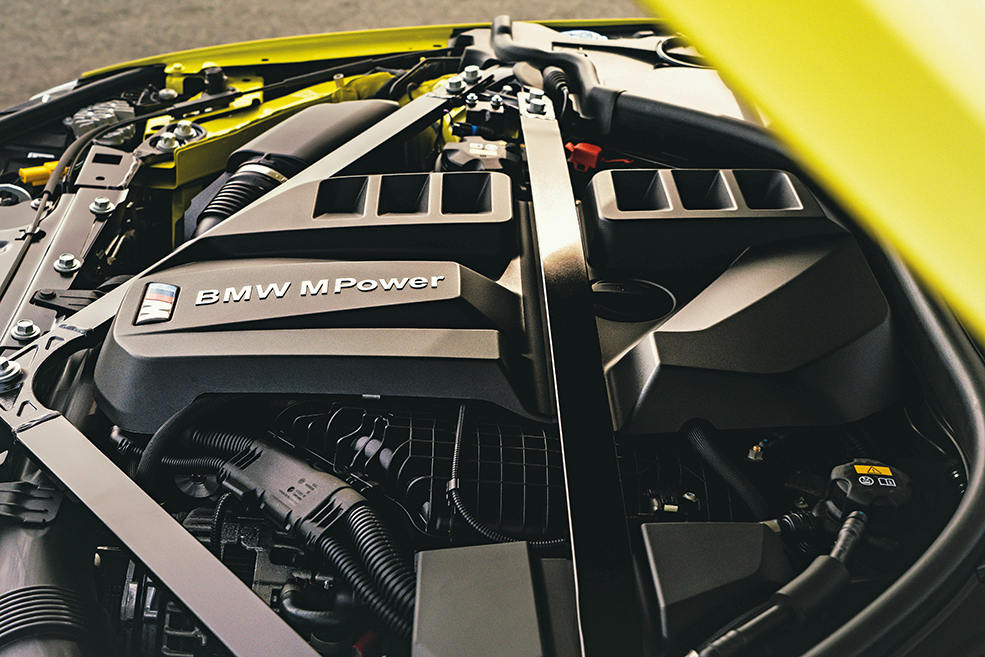 Allow us to get a few negatives out of the way. Both the M3 and M4 Competition are heavy cars. The saloon clocks in at 1805kg EU (that’s fluids, 90% fuel and a 75kg driver on board), while the coupé is only 5kg lighter. And while the G80/2 come on Adaptive M Suspension dampers as standard, offering three modes of Comfort, Sport and Sport Plus, the first of these doesn’t exactly do what it says on the tin. The ride quality is always a touch firm-edged, the road noise coming into the cabin a little on the louder side than is strictly necessary.

Thankfully, two things mitigate this issue: one, while the M3 and M4 Competition never let you forget just how serious and potent they are, even when they’re just cruising along a motorway or ambling through a town, they are never outright uncomfortable; and two, in Sport mode, the damping is actually quite marvellous at providing a good balance of pliancy-to-body-control, so you can just leave it in Sport and be done with. 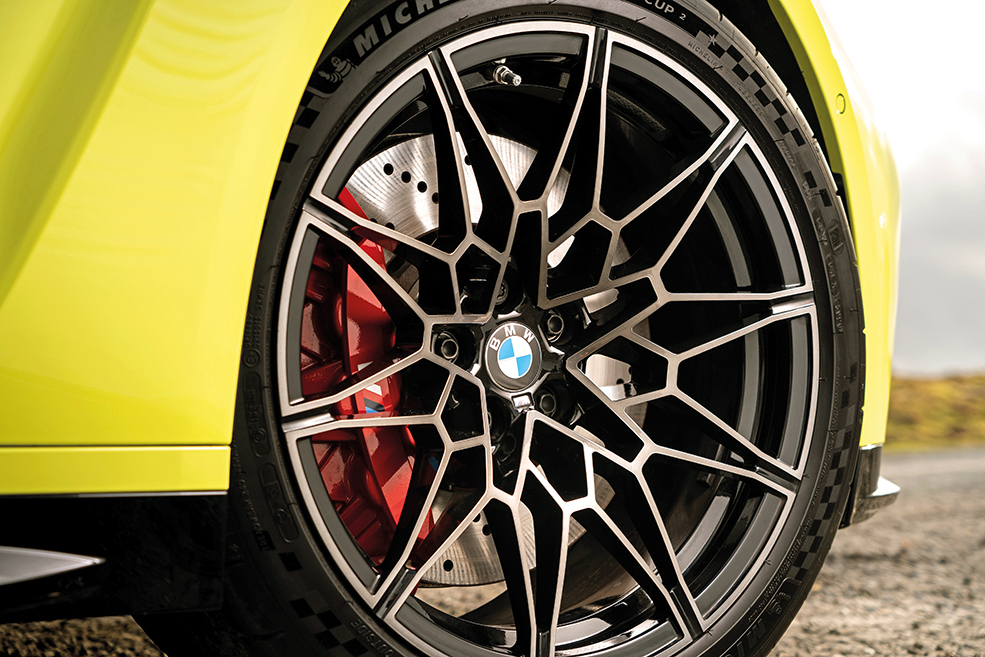 From there on in, the G80 and G82 will astound you. There are more settings, such as two for the brakes, three for the steering (all of which are magnificent), and another three for the drivetrain, and you can tweak and play around with these at first to gain some genuine reward and tutelage from the BMW, before saving your preferred car settings to the M1 and M2 buttons on the steering wheel.

And then you’ll have either one of the greatest super saloons of all time, in the stocky form of the M3, or a four-seat coupé pretty much beyond modern-day compare if you go for the M4. Where early S55-equipped F80s and F82s could feel spiky, aggressive and ill-calibrated, the G80 and G82 are none of those things. There’s an immediacy of response to the front end of the Ms that imbues the driver with such immense confidence from mile one that you soon forget that you’re in heavy machinery. Even during low-speed manoeuvring and when negotiating your way out of urban areas, these Competitions feels agile and lithe, not lumbering and leaden.

Once the road gets interesting, though, they will blow you away with their sublime handling. Oversteer is never more than a modest ankle-flex away, thanks to the linearity and lag-free nature of the S58, but when the traction breaks at the back the resulting slides are controllable and fun. You don’t have to make the M3 and M4 Competition wag their tails, though, because traction is phenomenal considering the torque coursing through the rear tyres alone. 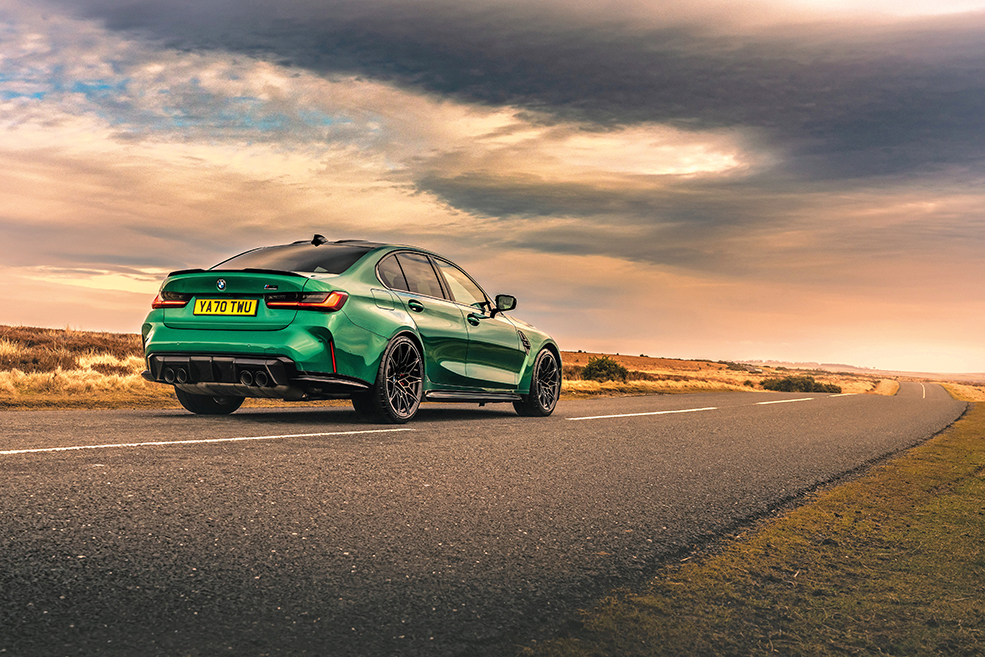 With the straight-six snarling away up front (it’s no S54 in the sound department, granted, but it still sounds good when revved out to 7200rpm) and the M Steptronic proving there is no need to lament the loss of either a DCT or a full three-pedal manual gearbox, the M3 and M4 Competition are both epic. They have wheel travel for the ages, pressing as much of their Michelins into the surface as possible. They have balance from the top drawer, with the adjustability of your cornering line variable by the micron through the steering and pin-sharp throttle. They have pace to burn, and they have turn-in that few rivals can match.

We can say with great conviction that the current BMW M3 G80 and M4 G82 are already among the greatest M3s (or M4s) ever built and there is much to adore and little to dislike about the pair of them. Choosing one is tough but we’ll make a call: buy the BMW M3 G80. It’s marginally better-looking, it’s more practical, it’s a tad cheaper and it’s no less exhilarating, magical nor downright edifying to drive than the M4 Competition. But if you prefer the M4 that’s fine, because whichever one you choose you’re in for one hell of an experience. 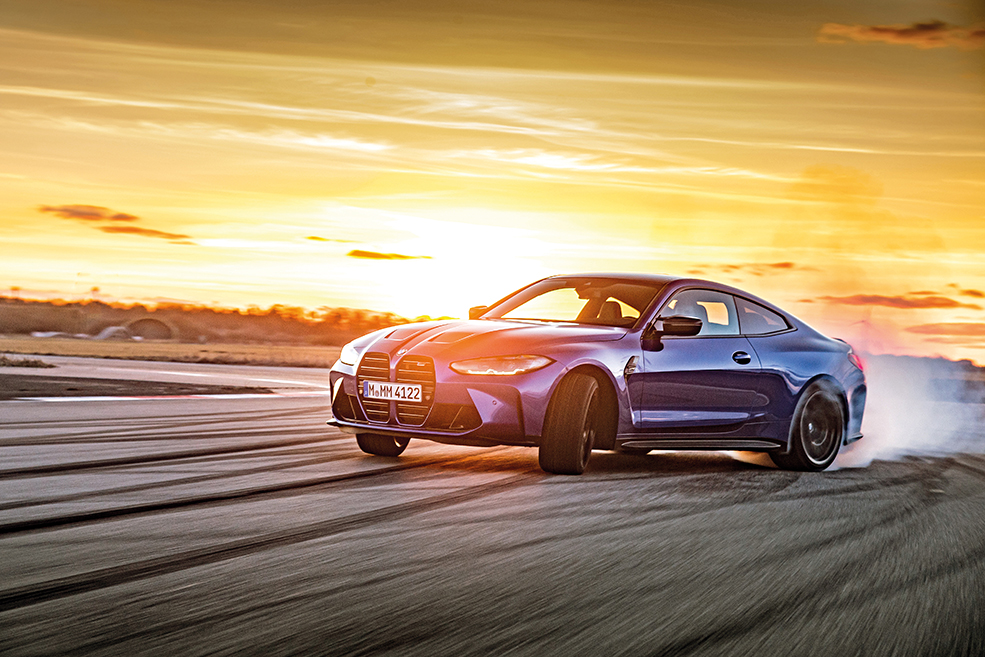 Road cars can often feel a little disappointing on track but not in the case of the M4 Competition. From the moment we leave the pits behind and keep the throttle pinned down the first straight, it’s clear that BMW M has done it again: this M4 is proper.

That much should be no surprise given the considerable step up in performance, but how
the M4 uses its considerable grunt is the big talking point, now. Even on a damp and greasy racetrack, it imbues confidence in the driver to push on and find the car’s and their own limits. There’s a huge amount of communication coming back to your hands through the steering and through your posterior clamped within the stunning M Carbon bucket seat, allowing you to use the performance and track to the maximum, even with very little familiarity.

And then there’s the new M Drift Analyser function. Once activated you can then set the level of the M Traction Control from zero-10. Lapping the circuit, the variable traction control system is incredibly effective, as you can tweak it to your confidence and skill level, allowing more slip at the rear as you get comfortable with the sensation. At all times, you can sense what’s going on at the surface level.

The M Drift Analyser, meanwhile, actually scores your drifts by measuring how long and fast they are and also the drift angle achieved before awarding you a star rating out of five and it’s a lot of fun. With a bit of practice, we managed a four-star rating, with a 110-metre drift at an angle of 23.1°. If you don’t mind using up a pair of tyres, this is great fun, but even without such tomfoolery, the new M4, while still a challenge to get the most from, is more enjoyable on track than it has ever been before.