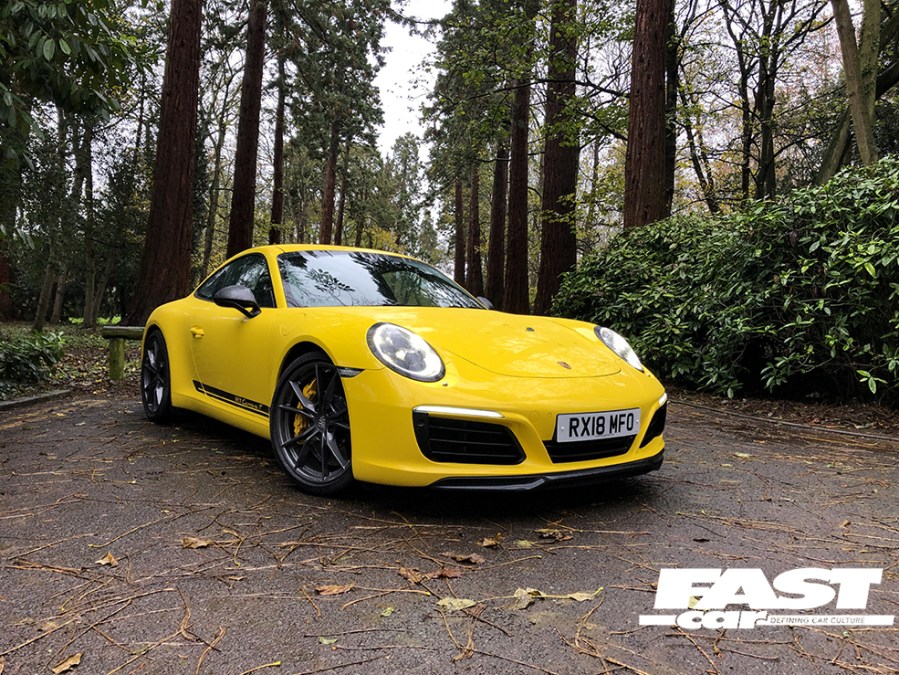 We’ve been lucky enough to spend a week in Porsche’s sign off to the 991 generation of the 911, the Carrera T. There’s been some confusion as to what this car represents for Porsche and we’re attempting to find out what’s the crack.

I poised the question above, and ordinarily I wouldn’t give away the answer quite so soon into a review, but here it’s worth knowing the answer first before reading on. What I think this car represents was initially a very clever marketing ploy which encompassed the most popular options ticked on the 911 coupled with the fandom of the GT series cars, think GT3/GT2. What started out as an opportunity to sell a few more cars before the 992 generation arrived, culminated in creating what can only be described as the best of the bunch, here’s why.

Porsche went back to basics. What do we love about driving? When it comes to Porsches, it’s the flat-six engine paired with a manual gearbox. Next up, lightness. It started with doing away with the rear seats, then the infotainment system, then adding the forged wheels, sports exhaust and finally the rear glass from the GT2 RS, which is thinner and therefore lighter. All in, that shed 20kg. OK, maybe you were expecting a bigger shaving there, but they’re the facts. Given this car had the infotainment system opted back in (thankfully), the weight saving was probably more like 15-18kg, but that’s neither here nor there.

Porsche then decided that the sports suspension was the way forward, dropping the ride height by 20mm to give it a more purposeful look with more focused damping for spirited driving. On the contrary, it hasn’t gone so far as to adopt a track-focused suspension, after all, the GT cars are reserved for track, this is not that. This is a road car first and foremost. Now we’re gearing towards a recipe that’s perfectly suited to the road.

The thing that was odd about our test car was the addition of Carbon Ceramic brakes. I’ve long been a campaigner against carbon ceramics for road use simply because it’s overkill. From cold, pedal feel is never as reassuring as regular steel brakes, meaning you need to use way more force than when they’re warmed up. Secondly, you have to warm them up before using them properly, otherwise they don’t react the same and you end up panicking you aren’t coming to a stop, ask me how I know. Thirdly, to option them on cars like the 911, you’ll need an extra £6,000! That’s fine if you intend to do track work, but this is a back-to-basics road car? Not a Cayman GT4 which comes in at the same price and features the big-bad 4.0-litre N/A flat-six, not the 3.0-litre turbocharged flat-six used here. So that’s odd. And pushed our test car to within £18 of £100k…

What struck me the most was how easy it was to drive. You sit nice and low but visibility isn’t compromised. The windscreen is vast meaning you can see without problem all of the time. This is crucial because cars like the 911 can appear intimidating, particularly when negotiating car parks. It’s reassuring to have a vast amount of visibility to give you confidence.

Next up, the gearbox. It’s beautiful. This car was opted with the 7-speed manual, perfect. It has a heavy, mechanical lever which slots home with composure and gives you that reassuring feel that you’ve nailed the gear change. Sport mode automatically blips the throttle on downshifts and you can get carried away by changing down quickly to let the revs sing. There’s something spine-tingling about rev-matching at 6k rpm and listening to the pops on overrun do their job. But it’s not just the crackles, that unmistakable flat-six noise is always there. That being said, the ultimate satisfaction is heel-and-toeing your way down the gears. Porsche has engineered the pedal set up just so that makes blipping the throttle an absolute joy.

The gearbox is slightly odd though, given its 7 speeds rather than 6. That means you get a regular h-pattern with 6th bottom right, but 7th is in a whole channel of its own next to 5th. That doesn’t sound like a problem but because the throws are so short and narrow, you can often select the wrong gear if you aren’t careful. That’s where the rev-marching functionality comes in handy so you don’t damage the car. Call it a safe mode if you will. We’re not sure you’ll ever need 7th, perhaps only if you’re cruising at say 80/90mph. The rest of the time you’ll stop at 5th/6th.

The engine is nothing short of sublime. Too many manufacturers have struggled with engineering the right tone with turbocharged engines, often leaving them muted but grunty. The 3.0-litre turbocharged flat-six on offer here doesn’t lose that characteristic N/A flat six, but it does get the addition of whistles as the turbos spool. It also helps massively in the trouser department as I’ll explain.

This isn’t the fastest 911 you can buy by any stretch, but most who have driven it will agree that it’s probably the best to own on the road. It’s a drivers’ car, but it’s a useable one in the real world. The helping of torque means you can stay in higher gears in certain corners and use the torque to pull you out. Performance wise, we’re talking 370bhp and 331lb ft of torque, with the car weighing in at around the 1500kg mark. Not too shabby.

That extra torque also comes in handy on regular commutes, you don’t have to rev the nuts off it to go anyway, you can use 5/6 or even 7 to overtake comfortably.

The aim with the T was to create the ultimate 911 by composing a back-to-basics and parred back approach. Less is more, and this is somewhat a lesson in that. I would have perhaps liked a few more areas of weight saving, after all, 20kg is minimal. If that figure was more like say 50-100kg, that would have created a rawer experience. That being said, you could argue that goes against what this car stands for. It doesn’t compromise on luxury, it just focuses on driving dynamics. You still get the same levels of comfort, the same premium finish that you should be getting with a £100k car, what you’re receiving on top of a regular Carrera is a well-thought options list that otherwise specc’d on a base Carrera, would be a similar figure. Mind, you can’t opt for the rear-wheel steering or PASM on the base model, so that negates the argument.

Show it a set of back-roads and this car comes to life. It’s beautifully damped so that it can deal with bumps and undulations, and the quite frankly rude 305mm rear tyres ensure you’ve got grip 90% of the time. For that 10% of the time when you’re feeling somewhat adventurous, you’ll have no problem getting the tail out.

Performance is more than enough for the road, it’s blisteringly quick through the rev-range but keeps on pulling through that last 1krpm, where most turbocharged cars give up the ghost. This is what you pay for, you pay for those extra touches that the likes of BMW, Mercedes and Audi forget. They’re more interested in mid-range punch, after all, the majority of their drivers care about headline figures and motorway pulls after 3 honks rather than stringing a set of corners together…

The steering is sublime, the front end darty and accurate. There’s no shortage of mechanical grip here and it’s very easy to adjust your line at any given stage. It’s reassuring not to succumb to understeer, either. A lot of these high-performance cars are engineered to lean on the side of understeer for safety, but here you never seem to wash out wide, even in the worst conditions. We tested this car in late November of 2019, so you can imagine what the conditions were like. Needless to say, you have the confidence to press on even in such dire conditions. This really is a car you could use every day without hassle.

In my Fiesta ST verdict I said “Did the best just get better?”, guess what, I’m going to use it again. The Carrera T is the best road-going 911 you could buy, simple. The Turbo, while it has AWD and genuinely be used all of the time, also has over 500bhp. Couple that with the traction and there’s few occasions you can use the full amount of throttle. The GT cars are predominantly track cars and therefore can appear compromised on the road. Here, though, in its most basic form, the 911 shines. Back to basics is always a good thing, getting the simple things right and focusing on sheer driver enjoyment is paramount for any car enthusiast. If I had a spare £100k, I wouldn’t be financing a GT car, I’d be buying one of these. It’s bloody brilliant. Especially in yellow…