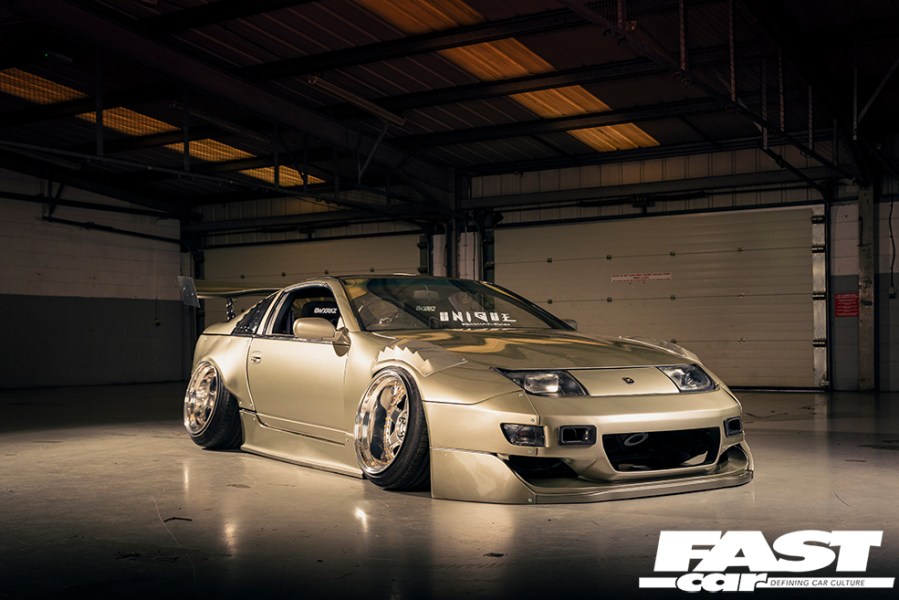 Jake Loader’s widebody Nissan 300ZX project fought him at every turn, but the end result is harder, better, faster, stronger…

Building a show car is easy, right? You’ve just got to slap your credit card down at your local stance-friendly emporium, cart the hardware home and bolt it all on. Simple as that. Er, no… not quite. Sure, that approach may work if you want to build a generic air-and-wheels Golf or what-have-you (and we’re not knocking that, different strokes and all that), but if you really want to make waves throughout the scene then you’ve got to dig a little deeper. Put a little more heart and soul into it. And if you’re hoping for some tales to tell, you might find yourself lucky enough to be embarking upon a project that’s going to fight back every turn, relentlessly kicking you in the teeth until you eventually, somehow, tumble howling out of the other end with something unique. Which is pretty much what happened to Jake Loader. See his Z32 widebody Nissan 300ZX here? Damn, this hasn’t been an easy ride… 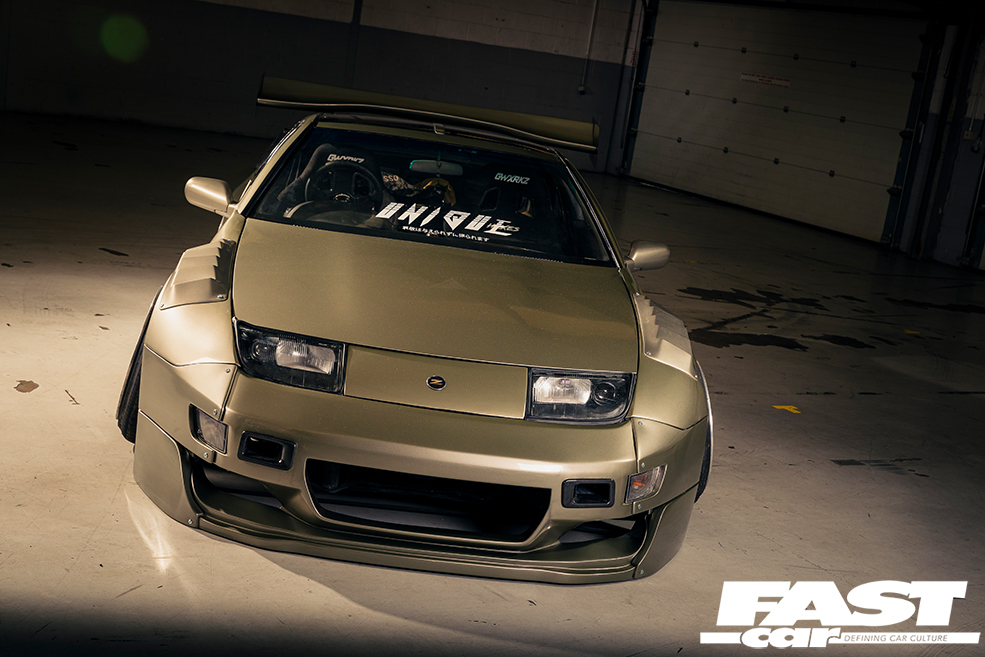 Much like it was for a lot of car enthusiasts, the 2020 lockdowns really kicked the passion for extreme mods into high gear. Jake had started out his automotive odyssey relatively gently, owning a Mk4 Golf as a first ride before moving onto a Mk5 – that received the standard set of first-time upgrades (cheap wheels, lowering springs, wiper delete, tinted windows, loud exhaust), and then he bought an E92 BMW 320d. He stuck that on coilovers, and through lockdown found himself rebuilding a set of 17” 5×120 BBS RS, stepping them up to 18”… and then fitting air-ride to the Beemer. He’d never done such a thing before but he fancied giving it a go, and it turned out really well. And you know how this sort of thing can turn into an addiction, right? All sorts of naughty thoughts started running through Jake’s mind. In the twinkling of an eye the car was being wrapped in baby blue – and then, all of a sudden, it was sold. Because he’d figured out that what he really, really wanted was a Nissan 300ZX.

“I’d wanted one for about five years,” he grins, “and had photos on my phone of how I wanted it to look. All my previous cars had been diesel, and I felt now was the time to get a nice loud petrol!” Well yes, we can’t argue with the logic of that. So Jake set himself a budget, and started keeping a super-keen eye on the classifieds. These are increasingly rare cars in the UK and they don’t exactly pop up every day, but this fella is tenacious and he knew what he wanted: not just a Z32, but a black 2+0 SWB with leather trim and a manual gearbox. Picky, much? But, somewhat amazingly, his patience was rewarded before long with exactly the right car at a reasonable price. Too good to be true? 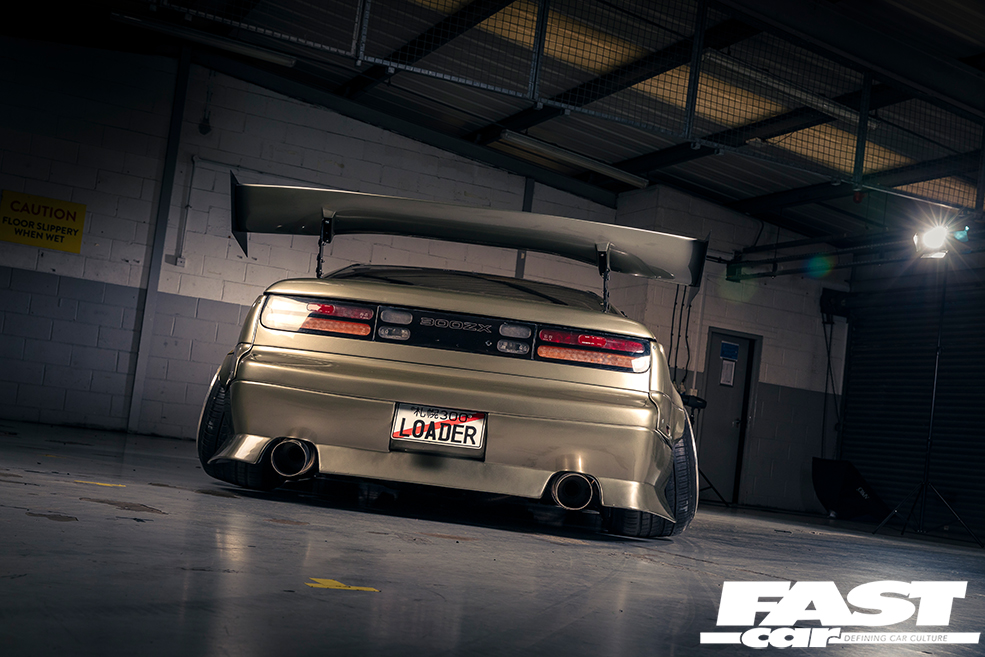 No, but also yes. “It’s been a rollercoaster of emotions,” he laughs, with the thousand-yard stare of a man who’s seen a few things. “When I first got it the plan was to be a slow rebuild, but that soon went out the window. I got bored! So I put some carbon fibre Zilla bucket seats in it, getting the adapters from Driftworks to get them to fit; I then went on eBay and got the cheapest camber kit and cambered the car to the max, lowering it so much it would smash everything!” Sounds like a pretty strong start. But of course, he was really only just beginning. “I loved it looking like this, but then I found the bodykit I had always wanted,” he continues. “One of my good mates said to me ‘you only live once’, and that he would lend the money to get the kit from America, then pay him back in a month. So I took the plunge.”

What Jake had spotted was the PMZ V2 widebody kit, something that you just don’t see over here. Indeed, this car is the first one in Europe to wear one, which meant that he had to do some proper trailblazing work. This wasn’t just a case of bolting on off-the-shelf parts, he was properly in deep with this one. 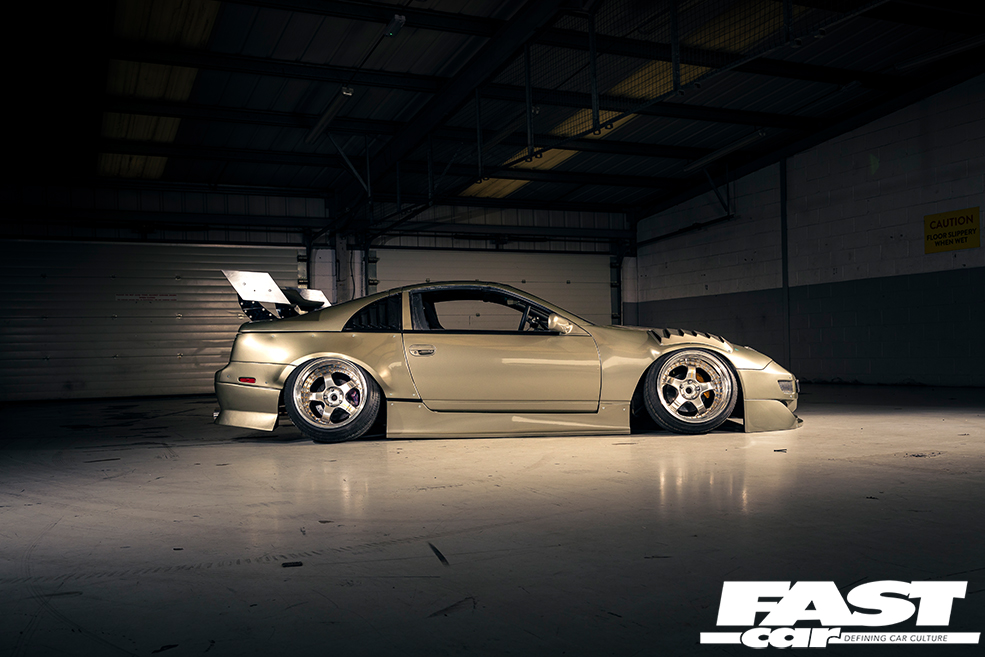 “I discovered that the bodykit was polyurethane – so basically rubber!” he exclaims. “Being Europe’s first, I had no-one to turn to for help in fitting the kit. So I fitted it on my driveway at home after work, and slowly got it all in place. I’d bought the biggest rear spoiler I could find and put that on it too; at the time I loved it, but then I turned up at the wrap shop only to be told the kit is unwrappable due to the flexibility of it – and basically my weeks of hard, hard work and lots of money had just been wasted!”

These were pretty dark times for Jake. He was in uncharted territory and, after this significant knock back, he was starting to feel that he was out of his depth. The project got shelved for a few weeks while he lost himself at the bottom of a bottle. But as reality started to swim into focus again, he gave his brain a bit of a shake, regrouped, and set about righting the wrong. Setting himself a target of his favourite show of the season – FittedUK – he decided to paint the car himself and just get it done! 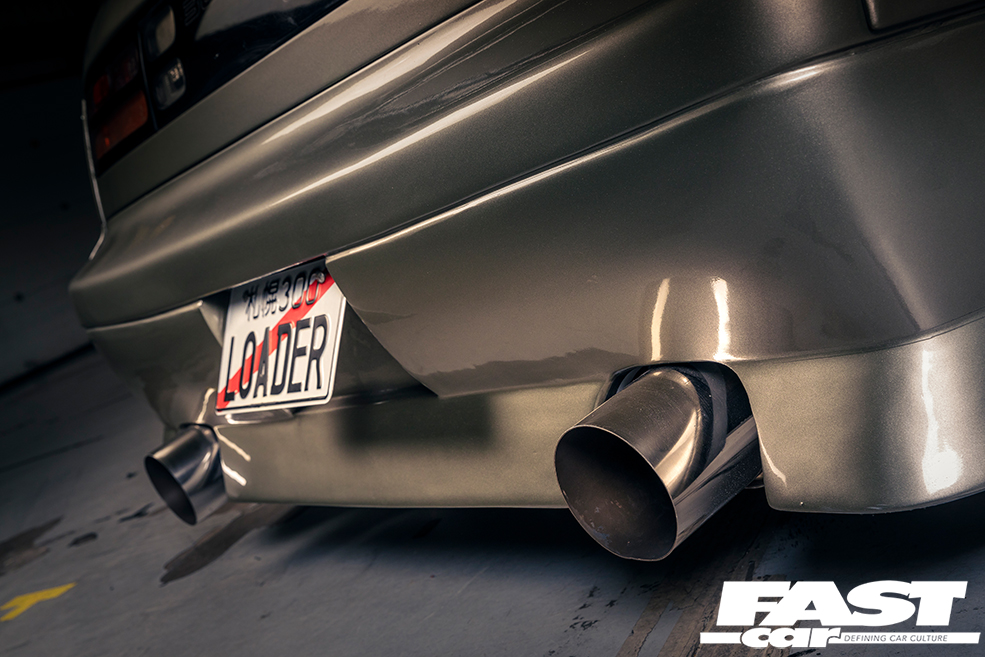 “My dad got a unit for work, but made sure it was big enough to fit my car in and I went to work painting the kit,” he says. “This was my first time using a proper paint gun, and it kept going wrong – I was told due to poor preparation and oil in the paint; with just a week until the show, my good friend Josh said he’d spend all week after work getting it done with me and we put some late, late shifts in. And then we found out the water trap had failed, and the compressor was essentially dead and ruined the black paint. The owner of the show, Koski, was really supportive and said just bring the car in whatever state, I have a spot… we tried to get it there but everything was against us.”

As you might imagine, Jake was getting a bit frustrated after all of these trials and tribulations. So after the show, he made a decision: the way forward wasn’t to be knocked down by fate pushing back, but to go in even harder, dream bigger, shoot for something even more extreme. And this was the turning point that ultimately led to the remarkable creation you see before you today. Taking the car down to Rayvern Hydraulics, he instructed them that he wanted the car to lay frame, and they set about making a fully bespoke hydraulic setup with custom 6-way switch box. Which is just about the best response to a conceptual knock-back that we can possibly imagine. The hopping can be controlled wirelessly, with the hardware showcased in a custom boot build, and this radical transformation really spurred Jake on to boss the next level. 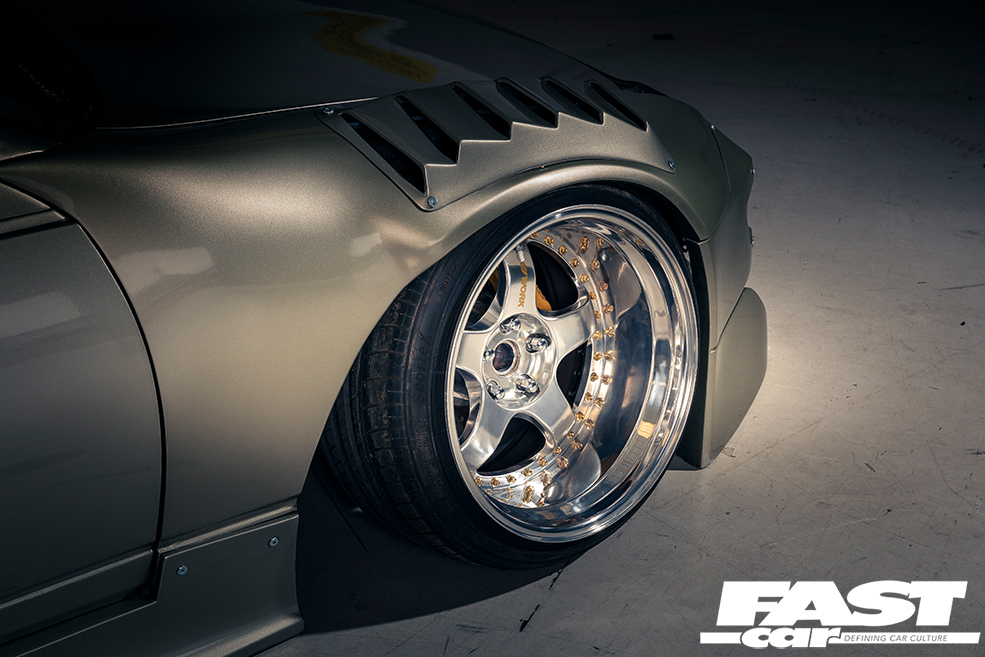 “I had picked a colour for a new wrapping company to work their magic on, and the countdown was on,” he grins. “I had Japfest as a deadline set, and fully cambered it to -13/14° all round; I measured up and got custom lips made for my newly purchased 18” WORK Meister S1 3P wheels, making 12.5”-wide fronts and 14” rears. The rear spoiler was cut down to roof height and I fully smoothed the bootlid to make it all look clean, then dropped the car off to S6 Customs to have it wrapped… but then realised I couldn’t get any tyres on! I now use the best tyre fitter called Faz, who runs his company called @specialisttyresuk – he gets them on first time, every time. I got the car back three days before the show, and me and my friend set out to get it finished at 4am the day of Japfest!”

…and there you have it. Building a show car can be easy, depending on your definition of ‘show car’, or it can be really bloody hard. All worth it in the end though, isn’t it? 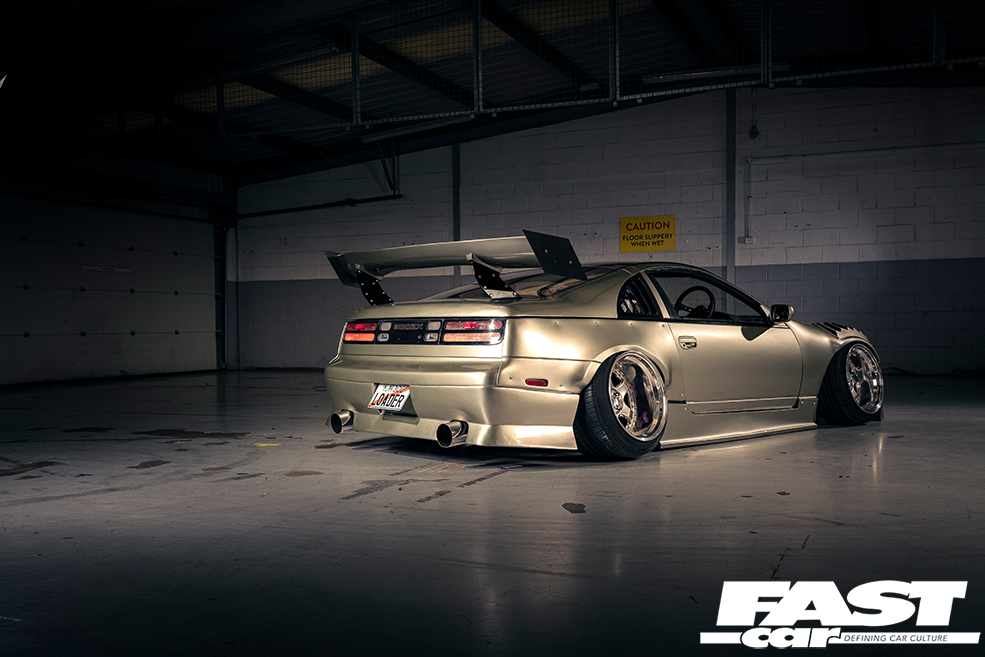 “I’d like to thank to my best mate Aaron for taking me 3 hours to the wrap shop 3 days on the trot to pick up and drop off bumpers to get it done in time. I’d like to thank my other good good friend Gareth for joining Aaron in the van on the way to Japfest and helping just keep the car safe and getting it done nights before. My lovely partner Freya for putting up with me not being at home and being up the unit all the time doing the car. A final thanks to all my friends and anyone else who has supported me throughout the build.”