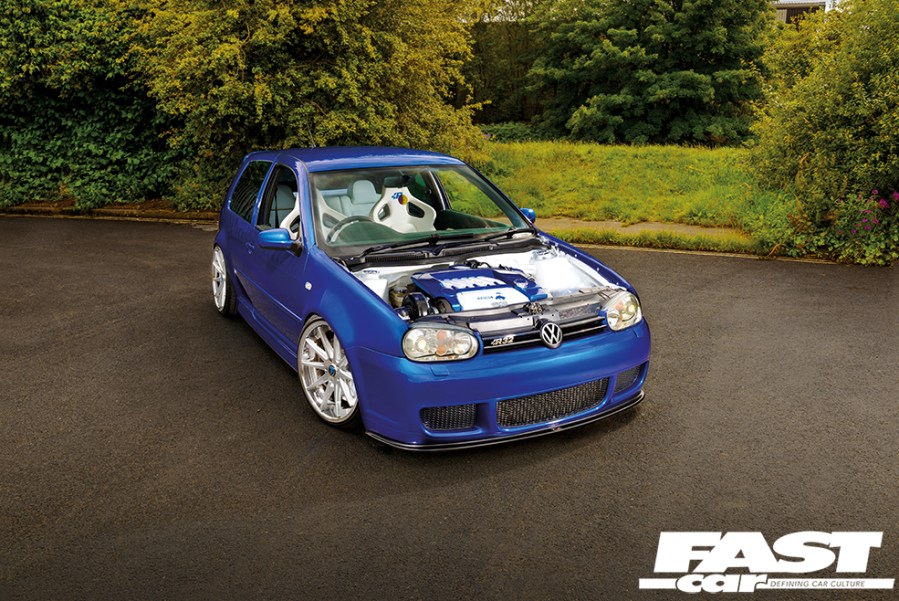 The R32 is no slouch in stock form. But when Paul Graham appears in his RUF supercharged Mk4 Golf R32, the slower players simply have to make way…

The most fun cars are the ones that do surprising things; ones that subvert your expectations and lead your preconceptions down uncharted paths. We’re not talking about sleepers here – that’s a well-documented area, and a whole textbook in itself. No, what’s flicking our switch today is the idea of using a novel base to build something devastating. Like when Top Gear commissioned Lotus to build a track-slaying Lada, and the Norfolk spanner-twiddlers ended up throwing a hundred grand at it. Or when Volvo entered the BTCC in the 1990s with an 850 estate. These are not the logical cars to choose for such endeavours, which is what makes the whole concept so eminently desirable.

So it is, in convoluted style, with Paul Graham’s supercharged Mk4 Golf R32. We all know what entertaining and amusing cars these are, taking the seasoned Mk4 Golf platform and sending the very essence of it down a celestial rabbit-hole, by swapping out the forced induction hedonism of the four-pot models for naturally-aspirated grunt and surging swells of torque from the creamy-smooth VR6. What’s happened with this car, however, is a sort of hybrid fusion of the two: it’s a genuine R32 with the correct VR6 motor, but forced induction does also make an appearance here, in the form of a RUF Stage 3 supercharger. The result of this is a meaty 406bhp and 354lb.ft, which is a pretty raucous way to behave. See, people know R32s are brutal, there’s no sense of the sleeper vibe here… but few would suspect that there’d be a blower under the bonnet. Paul’s Golf is taking the established platform in an entirely surprising direction. 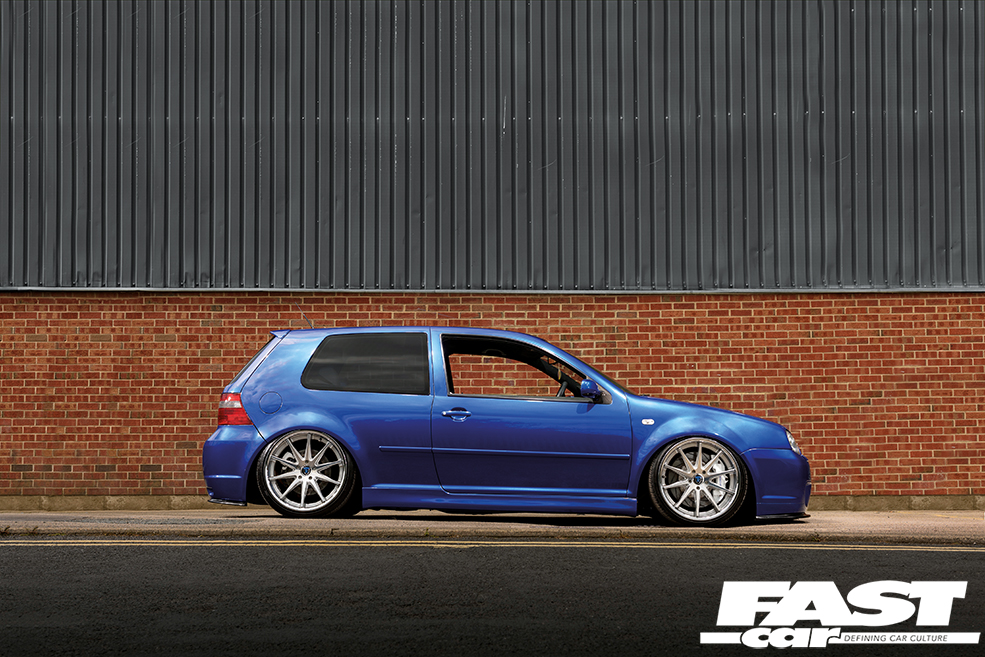 It’s perhaps very little mystery to anyone who knows Paul that he’d have ultimately found himself with a car like this; after all, he’s no stranger to the VAG stable in general, and R32s in particular. “I have owned around thirty VAG cars,” he assures us, “all of which I have modified in some way, or purchased modified and then adapted certain things to my own taste and style. I have always had an interest in cars, specifically modified ones, since I was young and reading about them in Max Power and Fast Car!”

In total, Paul’s owned five Golf R32s (so far!), two of which were Mk5s and three of them being Mk4s, which he considers to be the best ones. “The reason I have always been attracted to the R32 is the sound,” he enthuses. “There isn’t another car that compares to the VR6 engine and the noise that comes with it! There are tonnes of cars that I like, but the Golf R32 always wins.” 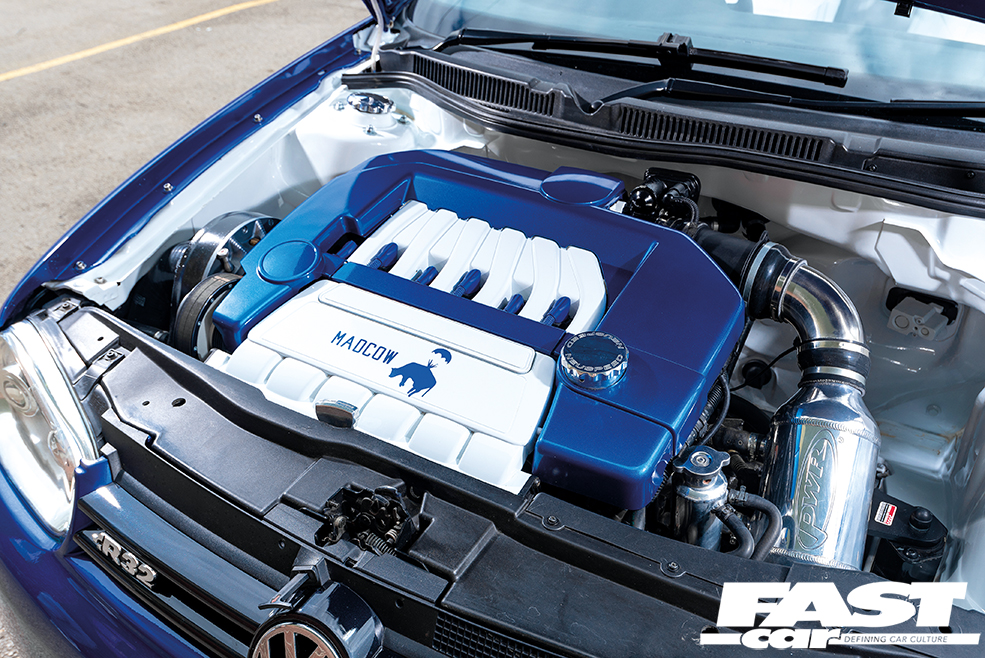 What’s interesting to note with this particular car is that it was already fairly extensively modified when Paul got his hands on it. The work was all done beautifully, which was part of the appeal of buying it in the first place, and this provided an interesting base upon which he could change and adapt and modify to his own taste and standards. His previous car had unfortunately been written off, which is how he came to be browsing the classifieds, and when this car popped up Paul immediately knew that it was a good one – after all, he’d seen it out and about at various shows! “The car was immaculate when I got it,” he says. “The spec was great, everything that I would have wanted to do to my previous car. I travelled to Scotland to collect the Golf and it didn’t disappoint; the previous owner had supercharged it, treated the interior to a stunning custom white leather retrim, and smoothed the engine bay to very high standard. The car had extremely low mileage for its age too – just 55k – which was a huge plus.”

With the Supercharged Mk4 Golf R32 already cutting quite a dash, Paul was keen to get stuck in and start making it his own. The front end had been fully smoothed and de-badged, but that wasn’t totally to his taste as he prefers a more OEM vibe; a brand new front end was sourced, with only the bumper smoothed where the number plate recess once was, and a set of wide SRS-Tec front wings were stirred into the mix, all of which Paul painted himself. And with that sizeable job taken care of, he set about digging around the chassis with the aim of radically reworking things to exponentially alter the car’s character: it was running coilovers as-bought, but the clear direction here was to get the thing bagged. 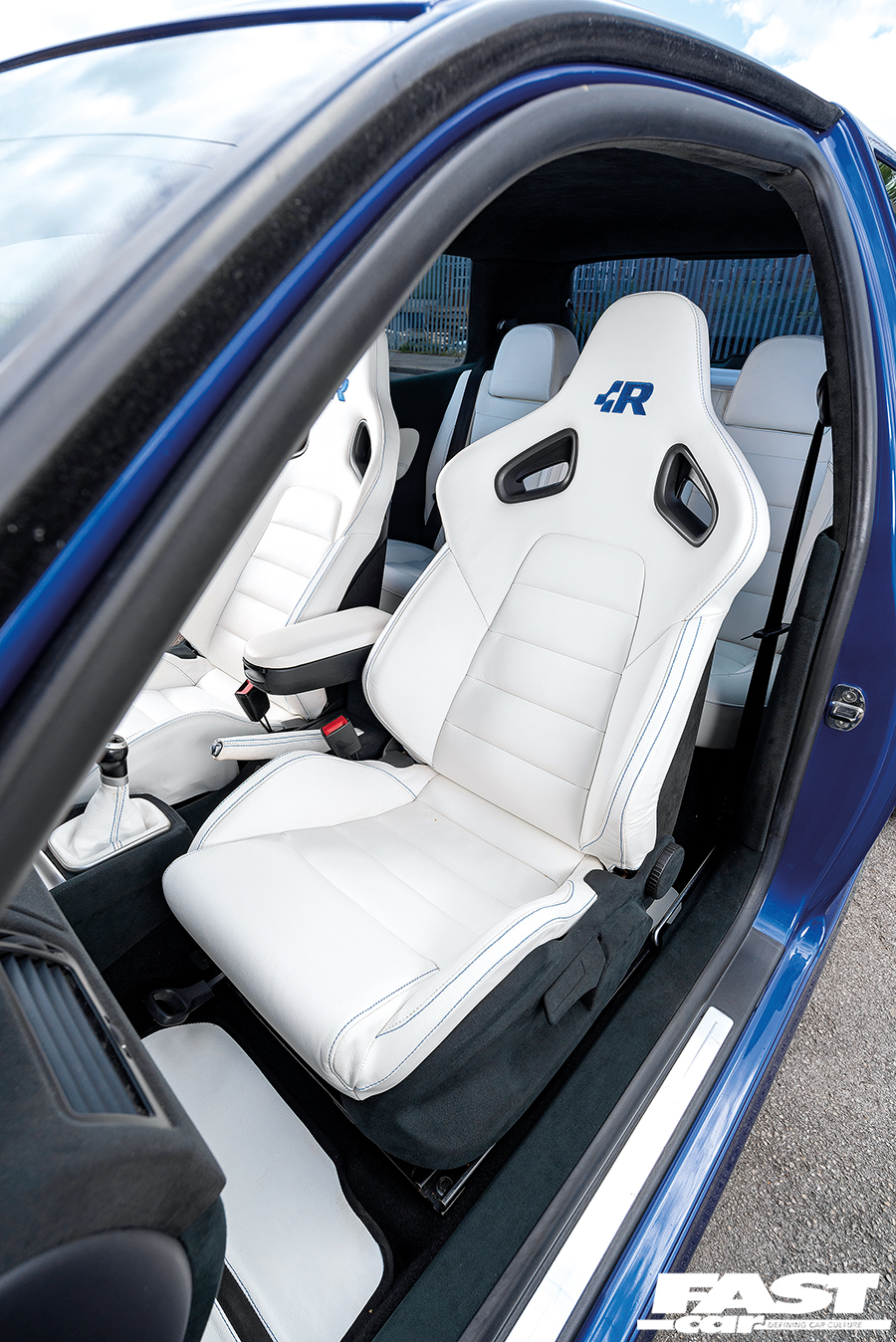 “I swapped out the coilovers for Air Lift Slam Series suspension, all of which I fitted myself,” he continues. “I also changed the front arms to polybushed ones, added adjustable polybushed rear arms, and a polybushed dogbone mount to improve the handling. Then I took the car to Jim at Novaks in Wakefield, who does all my suspension adjustments and four-wheel alignment – a company I would happily recommend!”

With the Golf laying frame like a true show-stopper, naturally it was necessary to find just the right wheels to fill those newly tarmac-adjacent arches. Paul’s a bit of a butterfly when it comes to rims, flitting from design to design as the fancy takes him, and it took a few different sets before he settled on the current hoops: a set of 8.5×19-inch Rohana RC10 imported from the States. Drink in the effects while you can, as the car will probably have different wheels before too long…! 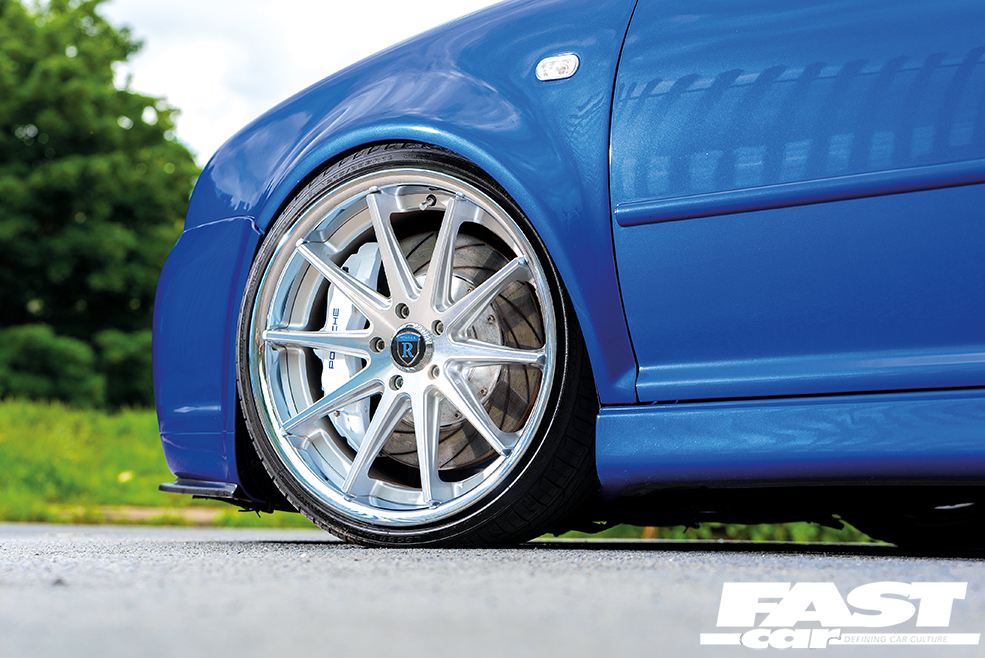 Things were really starting to snowball by this point, with the to-do list getting longer and longer. Since there was new air-ride hardware to accommodate, Paul planned out and crafted a custom boot build to match the retrimmed interior, complete with colour-coded air tank, before turning his attention to the exterior. The taillights were exchanged from UK-spec to Euro items, simply because they’re a bit different (a nice little easter egg for the aficionados to spot), while elsewhere the Golf received new TRC splitters fore and aft, and OEM mirrors on carbon-dipped bases to replace the Lupo mirrors that had been fitted.

Quite a lot had been achieved by now, and Paul was eager to address the one thing that’d really been niggling away at him: while the supercharger setup had taken the VR to new realms of awesomeness, it was never really running right due to its generic mapping, and this needed nipping in the bud. “I took the car to Stealth Racing UK in Southam, Warwickshire, to a guy called Vince who came highly recommended by lots of people in the car scene,” Paul recalls. “I went there for a custom remap, and Vince really worked his magic! I can’t recommend him enough for the work he did.” This is where we arrive at the aforementioned figures – 406bhp and 354lb.ft – and it’s worth bearing in mind that, thanks to Vince’s notorious expertise, these aren’t just big peak numbers, the power bands and drivability are exponentially improved. The stellar supercharged Mk4 Golf R32 motor has been taken to strange and beguiling new places. 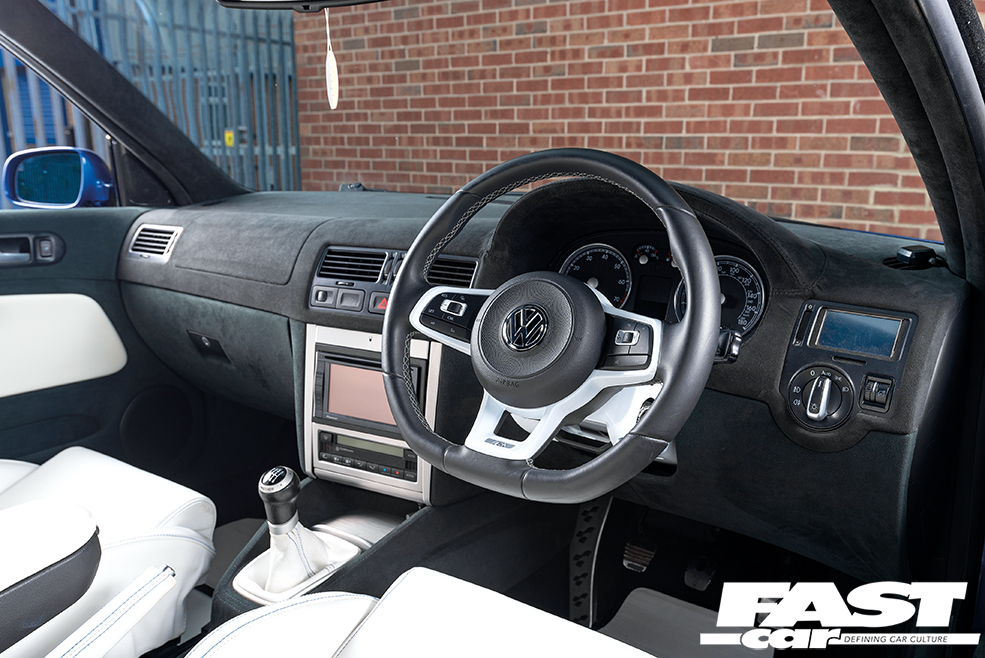 With great power comes great responsibility, so the saying goes, and in this instance it manifests itself as a sodding great 6-pot Porsche caliper upgrade, which Paul now took the time to remove, fully refurbish with new seals and pistons, and paint in Frozen White to match the smoothed engine bay. Upgraded friction material was squeezed in before it was all reassembled, and this largely brings us up to date: a bagged, supercharged, smoothed, ceramic-coated and perfected R32 with a pocketful of secrets and an appetite for mischief. Paul’s been using it as a fair-weather car, for shows and weekend blasts, and the attention it receives is unreal, not least because of its astonishingly clean finish. It helps that he runs his own business, PMG Detailing & Autocentre, where he carries out painting, detailing and all other aspects of automotive repair, so having done about 90% of the work on the car since buying it by himself, he’s fully equipped to keep it looking pristine.

“The Golf looks and sounds spectacular, it’s a real head-turner and attracts a lot of attention when I’m out and about,” he grins. “I love nothing more than people asking questions about it.” And you can be sure that the questions are always forthcoming… after all, most people know what a Mk4 Golf R32 is, but few would ever expect to find one that looks, sounds, and goes like this. 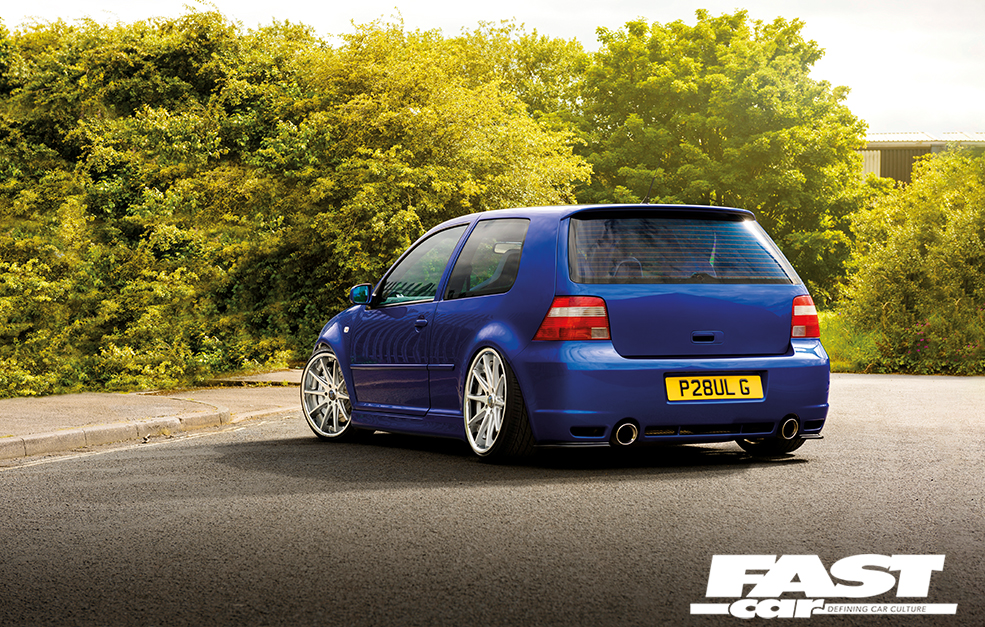