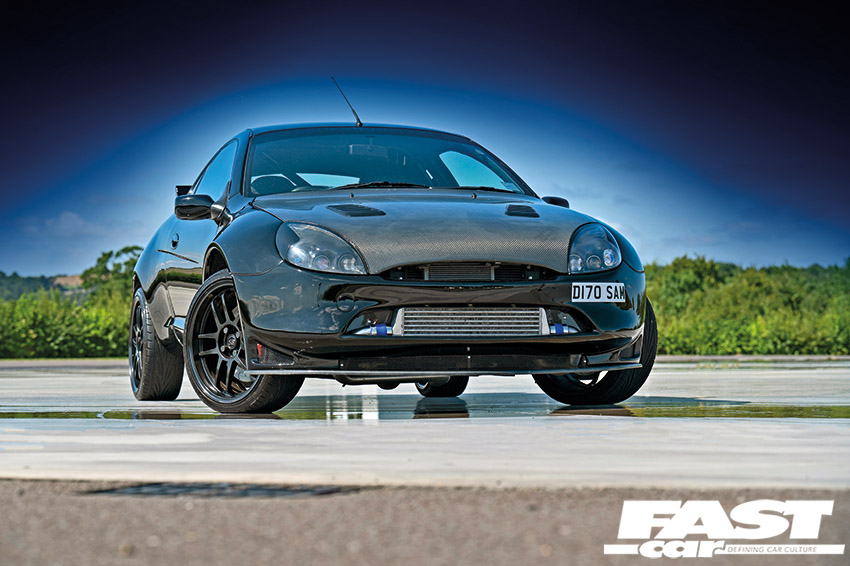 Sam Morgan is a guy who likes to be different. Every single modification he has made to his turbocharged Ford Puma over the past 16 years has been a very personal choice with no bending to scene norms, and the end result is a genuine one-off. How many wide arched, turbocharged Ford Puma builds have you ever seen?

In fact, how many people would even choose a Ford Puma to base their project on?

Sam admits, “I know they’re not everyone’s cup of tea, but this car represents huge sentimental value to me.”

Sam’s love for fast Fords came from his mother, who ferried him around as a boy in her XR2i, XR4x4 and Capri, to name a few past Blue Ovals. 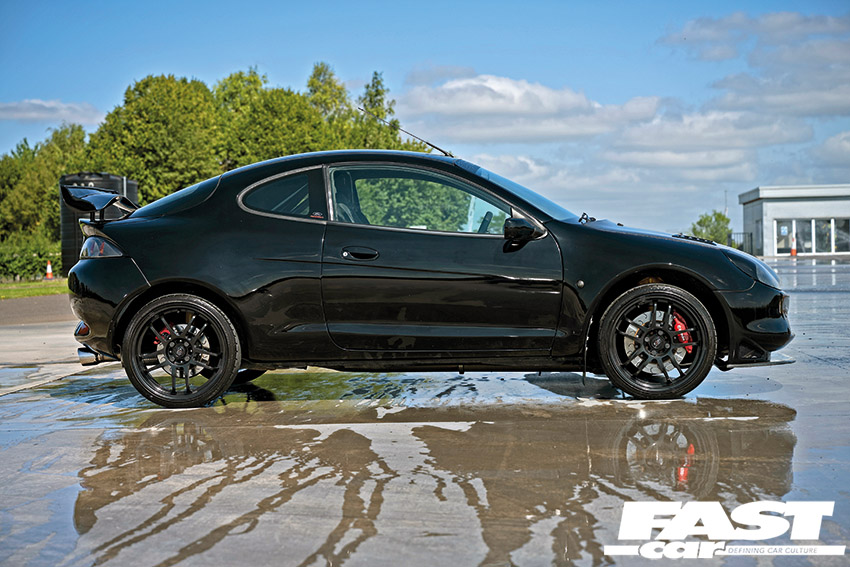 He says, “I remember that she drove really fast. We both liked the Ford Puma when it first hit the showrooms, and in 2005 she kindly helped me to buy this one.”

Unfortunately, just a few months after they purchased the car, Sam’s mother passed away. Since then, Sam and his Ford Puma have embarked on a journey of gradual but very meaningful transformation together, evolving a completely standard shopping car into a seriously capable fast road weapon.

The first mods came in the form of bigger alloy wheels, lowering springs, an exhaust and cone air filter – classic first steps that started many of us on our car modifying journey. These really woke up the Puma, and Sam was very happy for a while. Until he opened the Pandora’s box known as owners’ club forums… 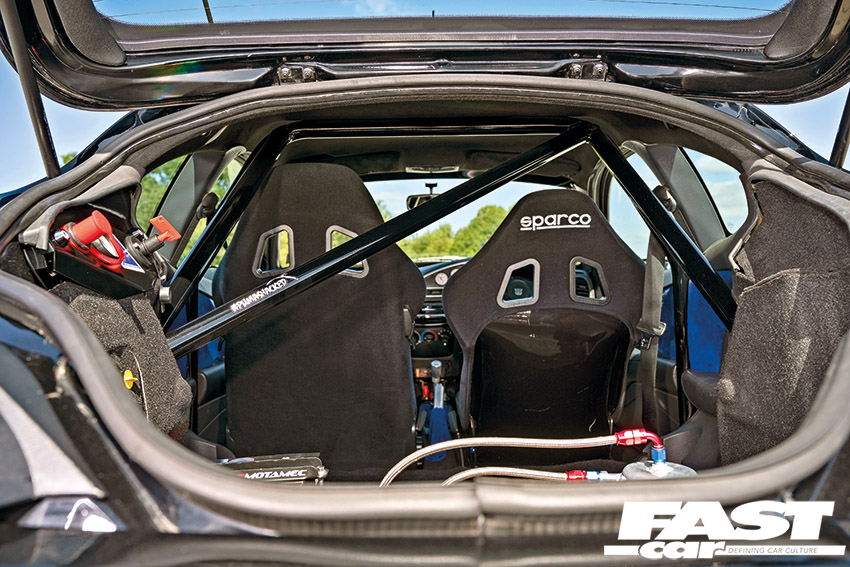 He says, “I got heavily involved in the Puma forums and one day I came across a crashed Racing Puma in the classifieds section.”

Sam had always dreamed of fitting wide arches, but he initially bought the crashed Racing Puma parts as more of an investment.

“Components for limited-edition cars always end up being a sound future investment, but after a year I looked at all of the stuff I had accumulated: genuine panels, suspension, brakes, drivetrain… You name it. So, I thought to hell with it and decided to fit it all to my car,” he reasons. 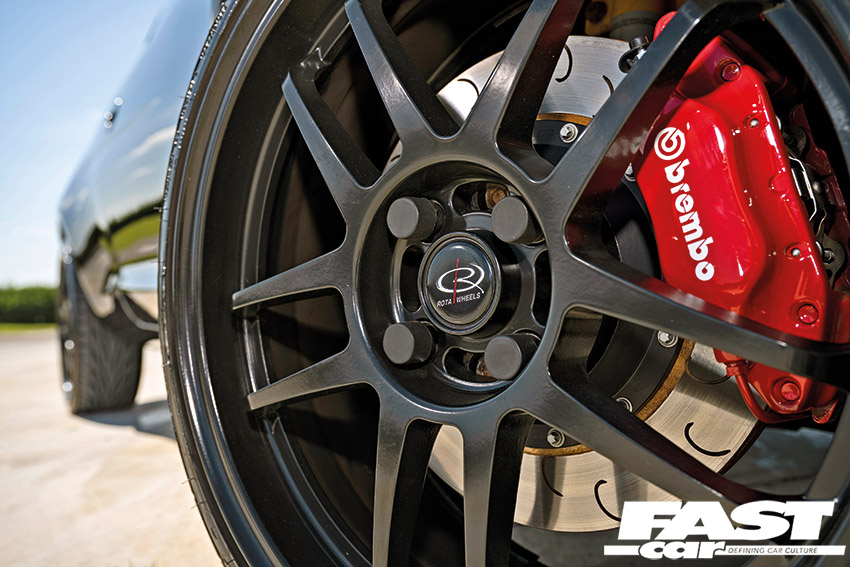 Pretty much every component bespoke to the Racing Puma was bolted up, including axles, hubs, suspension, body panels and the lovely short-ratio gearbox, which Sam rebuilt on his family’s kitchen table.

Topping it all was the 1.7-litre engine being treated to Racing Puma cams and inlet manifold number 0591 – it was now essentially a Panther Black Racing Puma in every aspect other than the logbook.

Sam enthuses, “I fell in love with the car all over again – the handling, the looks… It was now a completely different animal.” 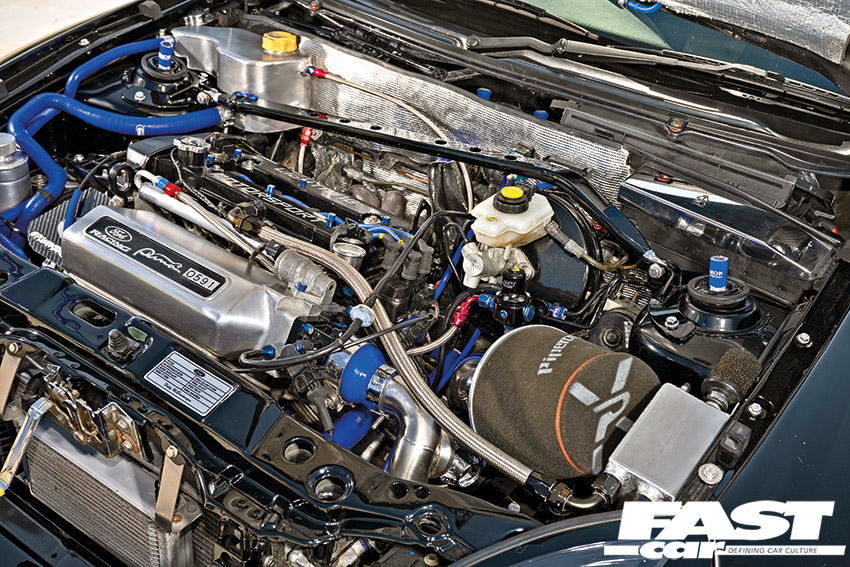 Anyone who’s spent seat time in a Racing Puma knows how much of a hoot they are to drive; their razor-sharp dynamics and buzzy drivetrain urge you to approach even the humble weekly shop with the focus and deft touch of a racing driver. As an exercise in balance and driving purity Racing Pumas really don’t need any improvement, but as you can tell, Sam is far from a purist.

He explains, “In the hands of an amazing driver a standard FRP could drive rings around most hot hatches, but for me, there is a lack of power compared to their immense levels of grip and agility of their chassis. There’s so much headroom. I couldn’t help feeling they should have come with another 100bhp from the factory.”

While researching various tuning options, Sam came across Lightning Motorsport. The Essex-based firm has turned out several turbocharged Pumas, including genuine Ford Racing versions, but the conversion was still quite exclusive ten years ago. Remembering back to a boyhood passenger ride in an Escort RS Turbo, Sam decided this was the way to go, and started to collect the parts. 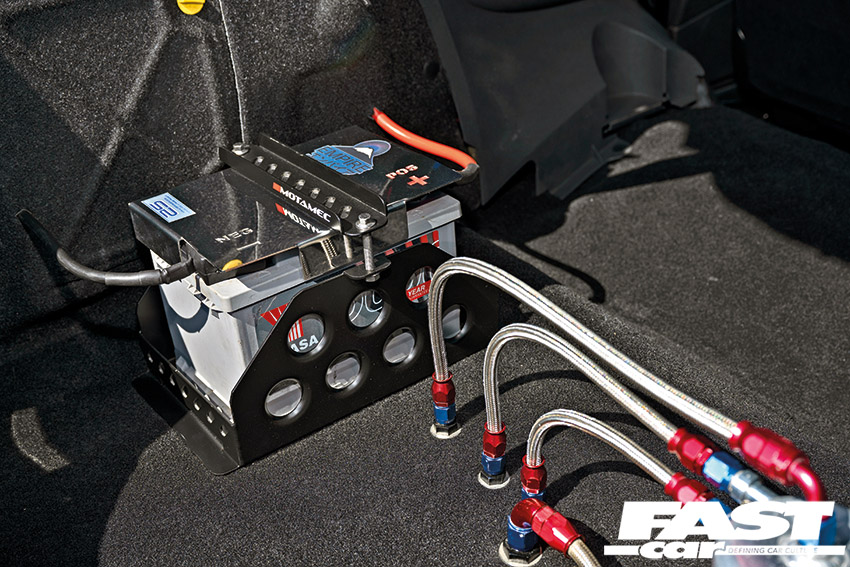 “There are some lovely supercharger kits available but turbos give you that addictive surge in power that I think is so exhilarating and fun,” he adds.

It took Sam a few years to save up for and stockpile the components required, and if you check out the spec list you’ll see neither he nor Lightning Motorsport were messing around. Steel liners, along with forged rods and pistons, give the bottom end a fighting chance with boost, and the head benefits from custom cams. A custom fuel rail with 660cc injectors hangs off one side, and a GT28R turbo mounted to a tubular manifold hangs off the other.

Lightning Motorsport built the engine, Sam spent a few months fitting it all back into the engine bay, and a local tuner mapped the Emerald ECU. 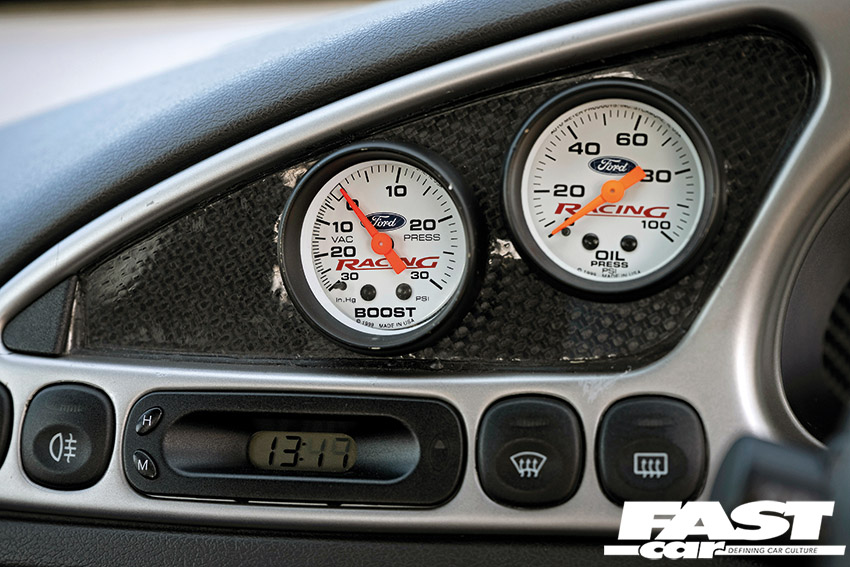 “After mapping, even on low boost, which is around 220bhp, it was mind-blowing,” Sam continues. “It’s a huge amount of fun but actually it’s very useable and doesn’t unbalance or ruin the overall package.”

Sensibly, the brakes were upgraded to Mk1 Focus RS callipers and discs up front and a rear disc conversion out back, composed of OEM Ford equipment from other models.

Sam explains, “I did contemplate going for the big Alcon Racing Puma brakes, but they’re more suited to racing, don’t have dust seals, and I was always reading about Racing Puma owners moaning about them, so decided the aftermarket route was better for me, given it’s an everyday car.”

While Sam was getting the engine back into the car, there was a major setback that could only really happen in rural Cornwall: a tractor clipped the rear quarter and ruined the beautiful Racing Puma wide arches. 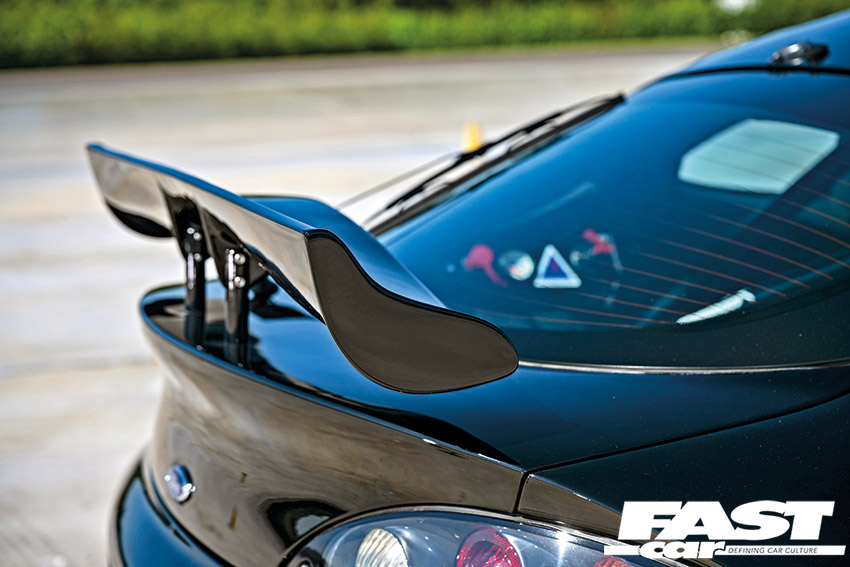 “It was gutting, because instead of simply gluing the wide arches on top of the rear quarter panels like the Racing Pumas do, we had gone to the effort of chopping the original quarter panels out before fitting the arches,” admits Sam.

Autoworx bare-metalled the rear of the turbocharged Ford Puma and carried out some other repairs before giving Sam a real conundrum: “They said it wouldn’t be much more hassle to bare-metal the rest of the car and paint it in whatever colour I wanted. I loved the original Panther Black but I came across a 3M colour called Super Black, and I thought ‘well, if I’m going to go black, it may as well be super black’.”

The paint is a high-gloss, non-metallic finish, which really does set off the curves and gives the Puma a much more serious demeanour than the sparkly original shade. Toughening the looks further is a full carbon fibre bonnet, which Sam took the brave step of cutting genuine RS Turbo bonnet vents into to help release turbocharger heat from the engine bay. 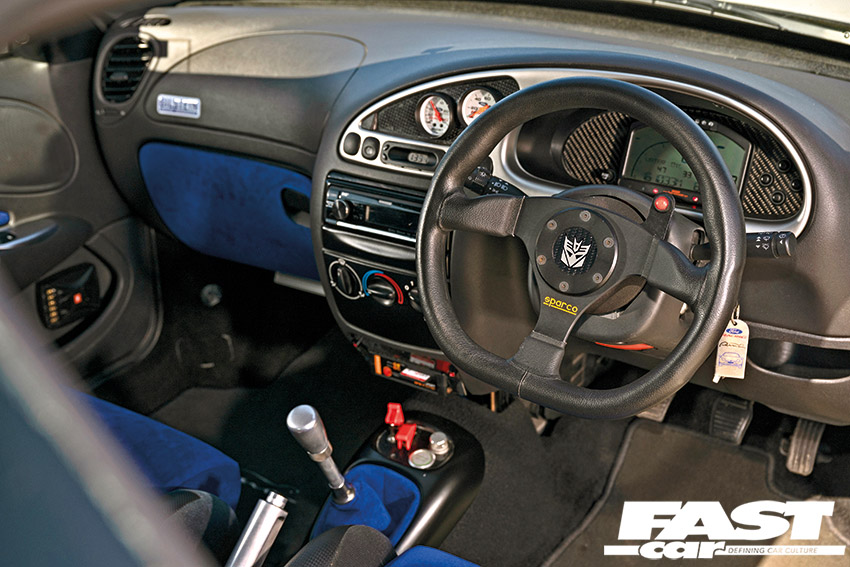 Sam says, “It felt very weird cutting into a perfectly good, and quite expensive carbon bonnet, but I measured dozens of times and cut once. Thankfully it came out all right.”

We’d say it came out better than all right, and we’re not the only ones. Sam attends Ford shows with his creation and it draws a crowd – thankfully for all the right reasons.

“The single biggest compliment I get is when people walk past it, then walk back over and tell me they don’t like Pumas, but they really like this one,” he laughs.

And even if other people didn’t like it, we get the feeling Sam wouldn’t care one iota.

“Blasting down British B-roads, it just comes alive,” he grins. “The driving experience is so visceral and not one element stands out above another. For me it’s the complete package and I just enjoy driving it… 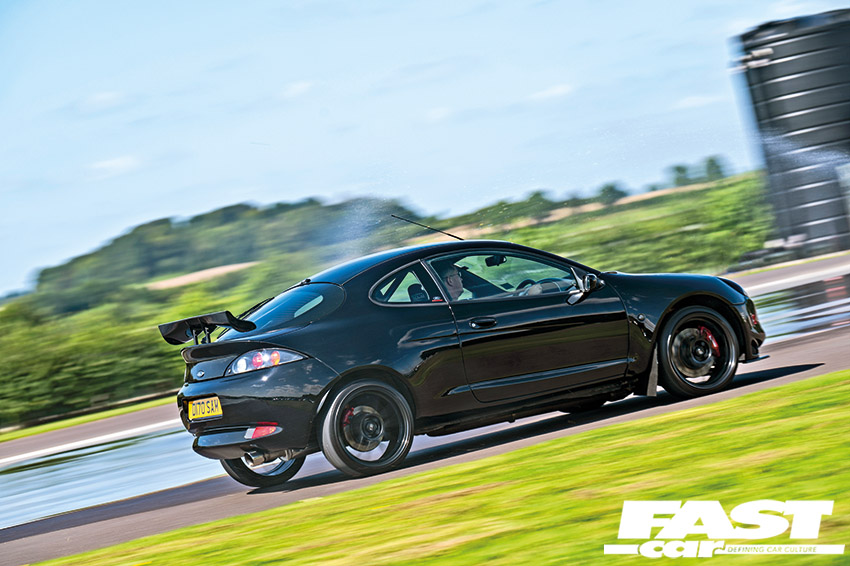 “If my mum was here I think she’d really enjoy driving it too, and I think she would be proud of what I’ve achieved.”

Unsurprisingly, this amazing turbocharged Ford Puma is a keeper for life, but it’s much more than just a car. It’s forever a major part in his life.