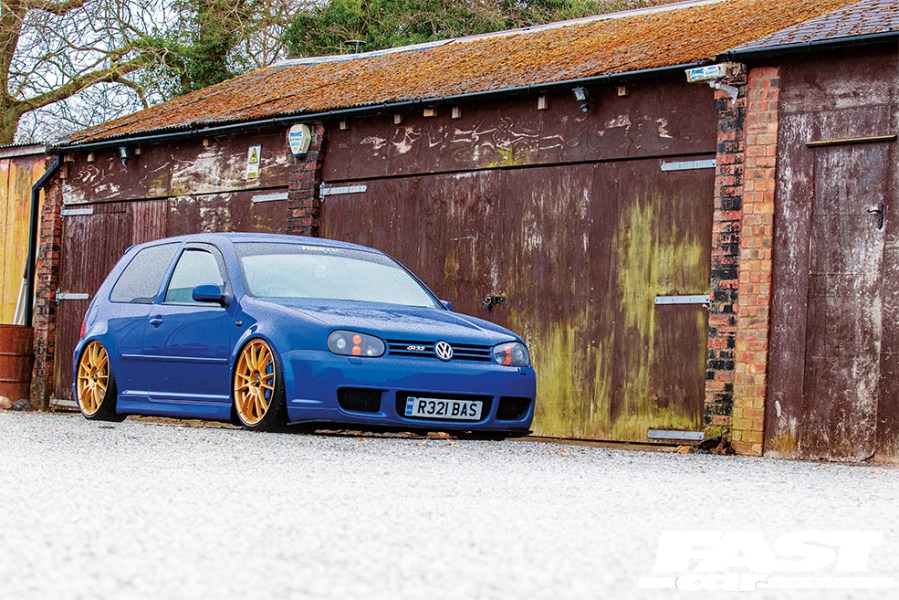 Chasing perfection is an impossible task. But for Barry Andrews, enraptured with his modified VW Golf R32, that doesn’t stop him trying…

Debate has long raged in pubs across the land over which hot hatch came first, and which is ultimately the best. These are nigh-on impossible arguments to circumnavigate, the former being a minefield of pernickety detail, and the latter being entirely subjective. But whichever way your proclivities swing, it’s undeniable that the Volkswagen Golf GTI is a name that always, always appears in the top-five lists.

The cult of the hot hatch is something that’s been inspiring enthusiasts and spurring them on for generations. Ever since the genre first broke through into the mainstream in the 1970s, the idea of having a sensible shopping hatchback that can also dominate a B-road and embarrass your posh neighbour’s wide-hipped sports car has held a perennial appeal. Hot hatches stuck a warm knife in the butter of performance and spread it broadly across the toast of society; they meant that the ability to go fast and enjoy yourself in a car wasn’t just limited to the moneyed classes, everyone could have a go. And whether it be the featherweight Mk1, the sublimely crafted Mk2 16v, the return-to-form Mk5 or the current showroom sweethearts, the GTI will never have a shortage of fervent acolytes. 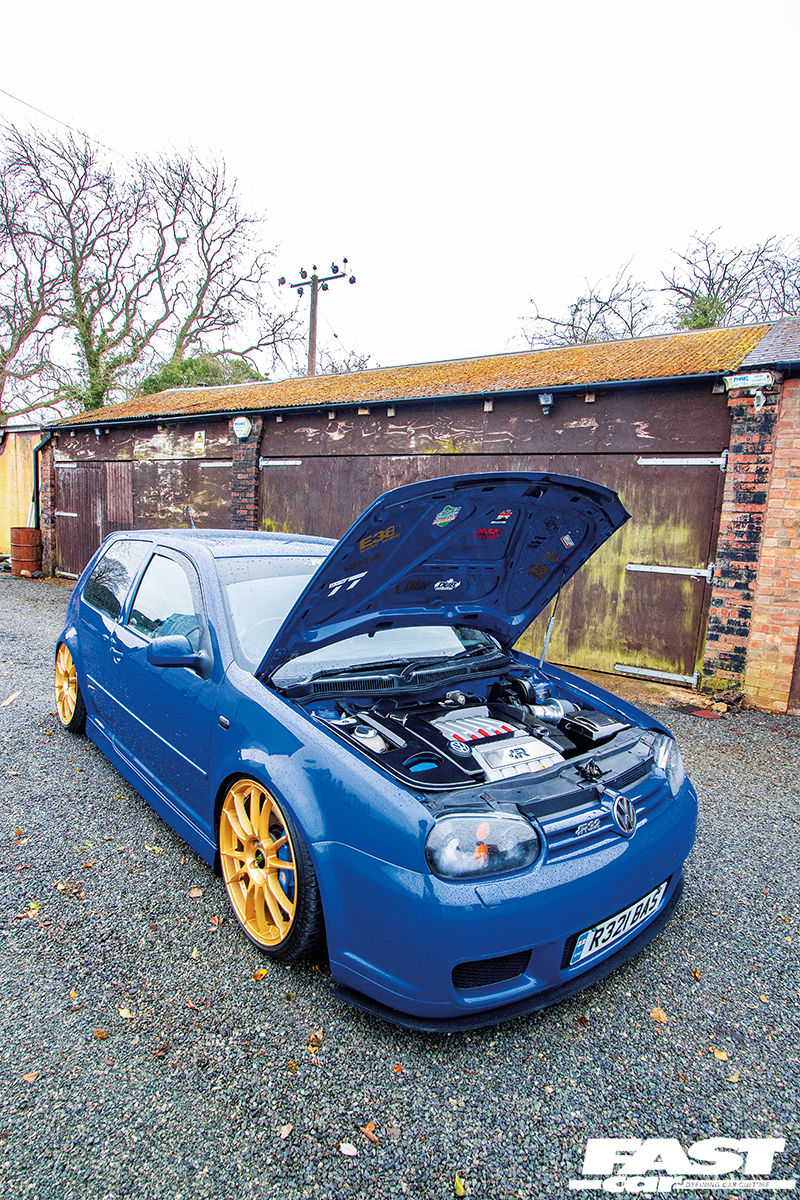 The car we’re looking at here, however, is not a GTI. No, the VW Golf R32 is a manic creation one rung above, sporting a brutal 3.2-litre 24v VR6. Specifically, we have our eye on the Mk4 R32, the original nutter to bear the name; a rare-groove special with a whole load of engine crammed into its artfully sculpted nose, Wolfsburg’s engineers most likely bouncing up and down on the bonnet with their venerable Teutonic arses to get it shut, as one might with an over-stuffed suitcase.

A further debate that’s been raging for longer than anyone cares to remember is whether the VR6 is actually a V6, although we needn’t get into that here. (One faction of fans will tell you that it is, because each set of three cylinders points a slightly different way. Their counterparts will say no, obviously it isn’t, count the cylinder heads and the manifolds. But whatever.) The crux of this mystical engine’s appeal is that it’s finally answered a question that people have been asking since the late-1970s – namely, what would it sound like if four people grabbed a Wookiee by the limbs and tried to stretch it across a tennis court? Wring out a VR6 to the redline and you’ll have your answer. 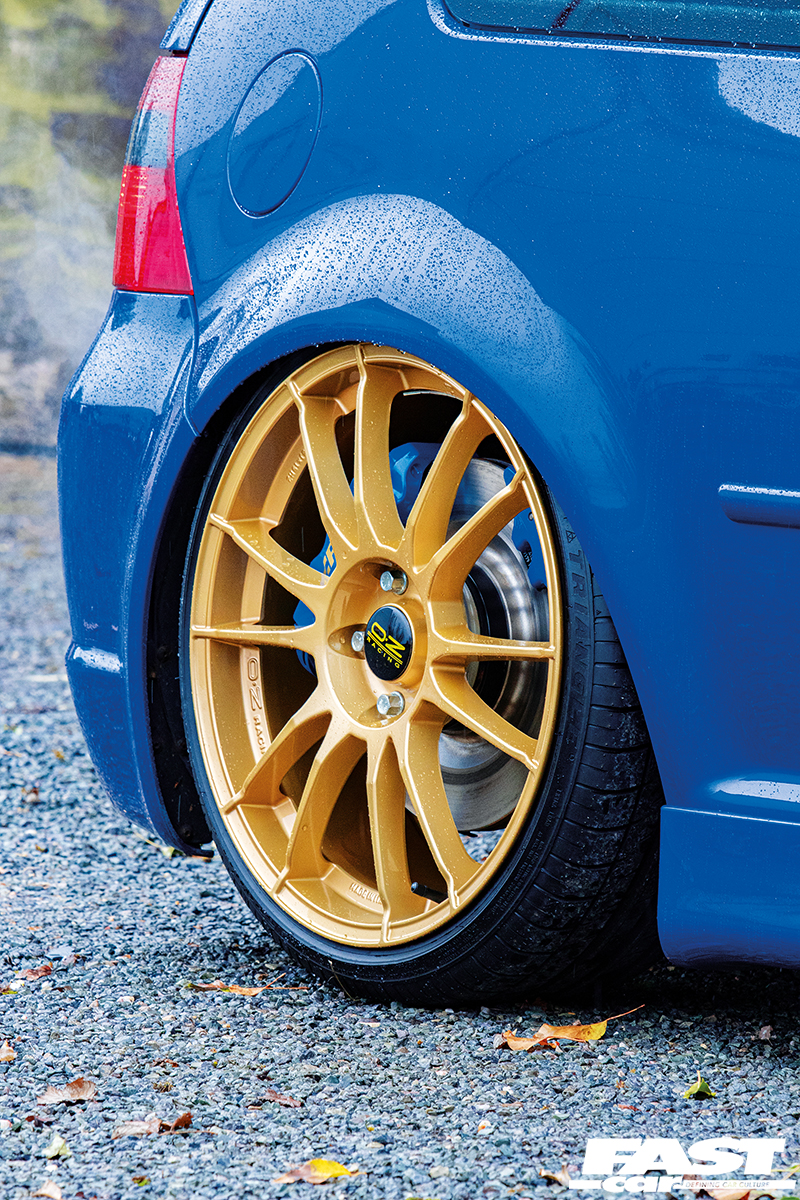 It certainly did much to beguile Barry Andrews – not only did he fall head-over-heels for the R32, but it inspired such passion in him that he started up a whole club for them. 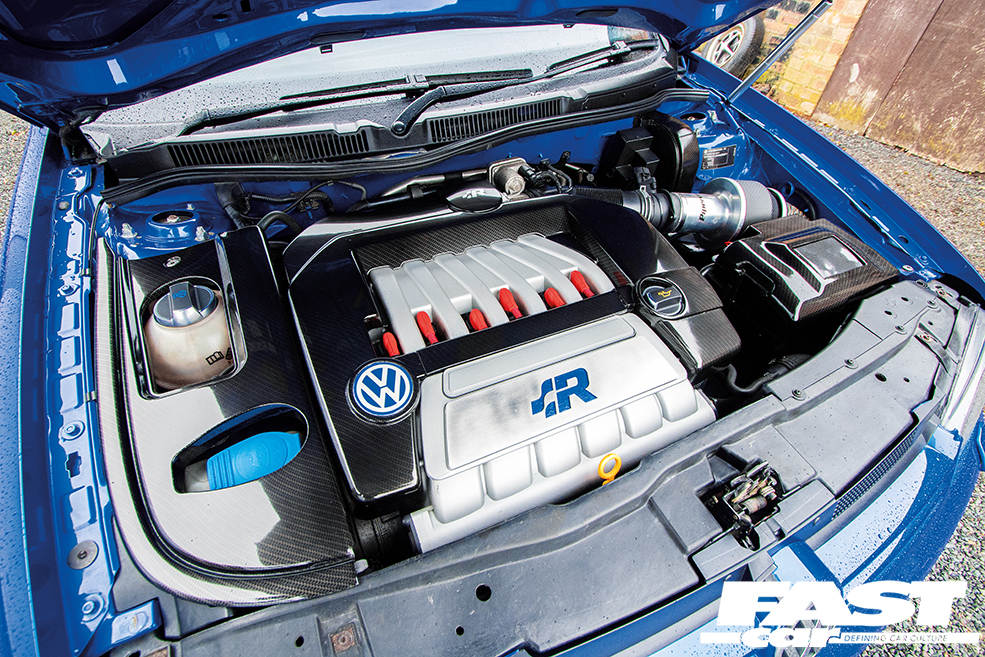 There’s a scientific methodology in evidence here, Barry trying out all manner of spicy machinery before eventually, by process of elimination, arriving at his forever car. “I’ve owned it for seven years now,” he continues, by way of proving the point. “I bought it from my next-door neighbour, and he’d owned it from the day it left the factory, so I’ve known the car its whole life. It’s on 77k miles now, and when I bought the Golf it was totally factory-standard.”

History hasn’t officially recorded what Barry’s neighbour makes of the changes that have been going on with his ex-Golf as it sits there on the adjacent driveway, although the passion coursing through it must be plainly evident. So enraptured was Barry with the R32 that he founded the R32 UK Owners Club. Some readers (within a small niche, admittedly) may have a niggling feeling that they’ve seen the car in print before, and the answer to that is that it was on the flyers for the Edition 38 show in 2018. And that sort of feeds into the widespread scene appeal of this car. You see, it’s more than just a Golf, in more ways than one. If you’ll indulge us for a moment, we have a theory…

Hyperhatches are a bit of a thing these days, creating the sort of power levels that would have been supercar-level back in the nineties. The genesis of all this started to bud in the late-1990s/early-2000s with madcap specials like the Renaultsport Clio V6, and what Volkswagen achieved with the R32 was to build a ballistic hot hatch that wasn’t really a hot hatch at all. Look under the skin and, on a strictly technical level, it’s essentially an Audi TT. No really, go with it: there’s the 3.2-litre six-pot motor, the Haldex all-wheel-drive setup, the six-speed manual ’box, the independent rear suspension, the aluminium front control arms, the big 334mm brakes – it was as if VW nipped over to their mates at Audi, scooped out the innards from a TT, then rammed it into a Mk4 Golf shell. And when said Golf started bursting at the seams, they unstitched it a bit and tacked it back wider, with fatter arches and broader bumpers and sodding great wheels. A proto-hyperhatch for a new generation of hot hatch enthusiasts.

So it’s a pretty cool car in standard form, although obviously you won’t be finding standard cars in Performance VW. This isn’t What Car. No, Barry took that stellar base and ran to strange new places with it, with the help of his new-found club buddies spurring him on and showing him the way.

“The club members’ advice was a great help with my build,” he assures us. “Seeing their cars on our club stands gives me ideas for my own project!” 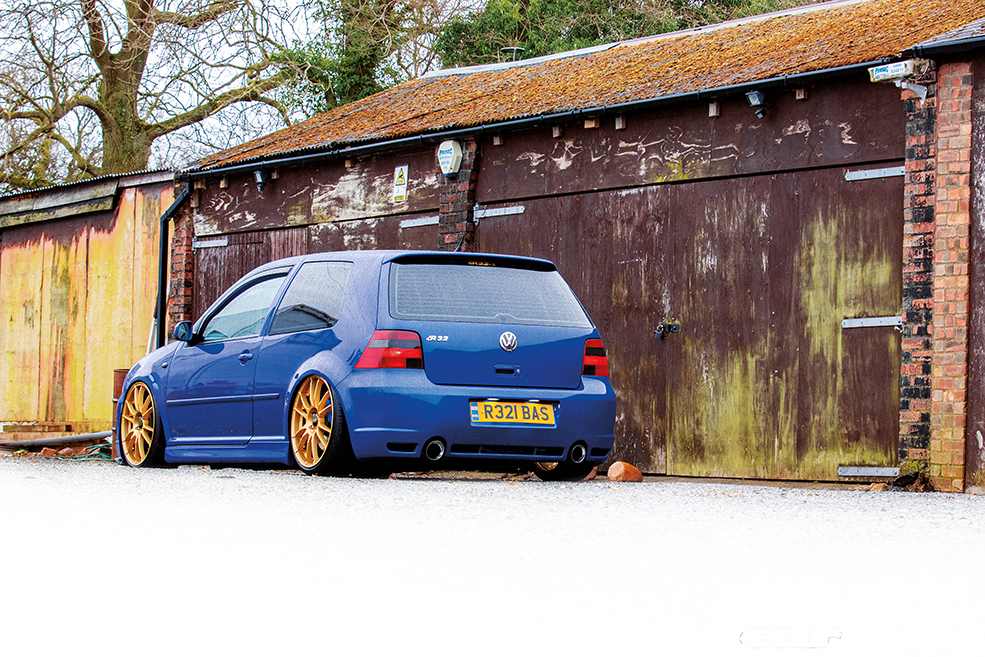 That Wookiee’s howling just a little bit louder these days, to the intergalactic tune of 270bhp; this has been achieved via a Milltek system, Pipercross induction and a Stage 2 map by R-Tec. The latter is particularly entertaining, as it allows for flat-shifts and launch control, which is plenty to plaster a smile over Barry’s face. Keen attention has been paid to the aesthetics too, with the underbonnet treated to a carbon fibre engine cover and battery cover, chrome engine plate, Audi S3 washer bottle cover, and Engine Bay Styling mirrors. The fanciness continues to the outside with gusto: the body has been repainted a couple of years ago by Paint FX in Kettering, and the super-high quality of the job is evident throughout. A smoothed front bumper is joined by a Vagroots splitter and custom headlights, with stubby Lupo mirrors and USDM tails completing the vibe, and the arches have been rolled to accommodate those chunky OZ Ultraleggeras – artfully slathered in BBS gold. 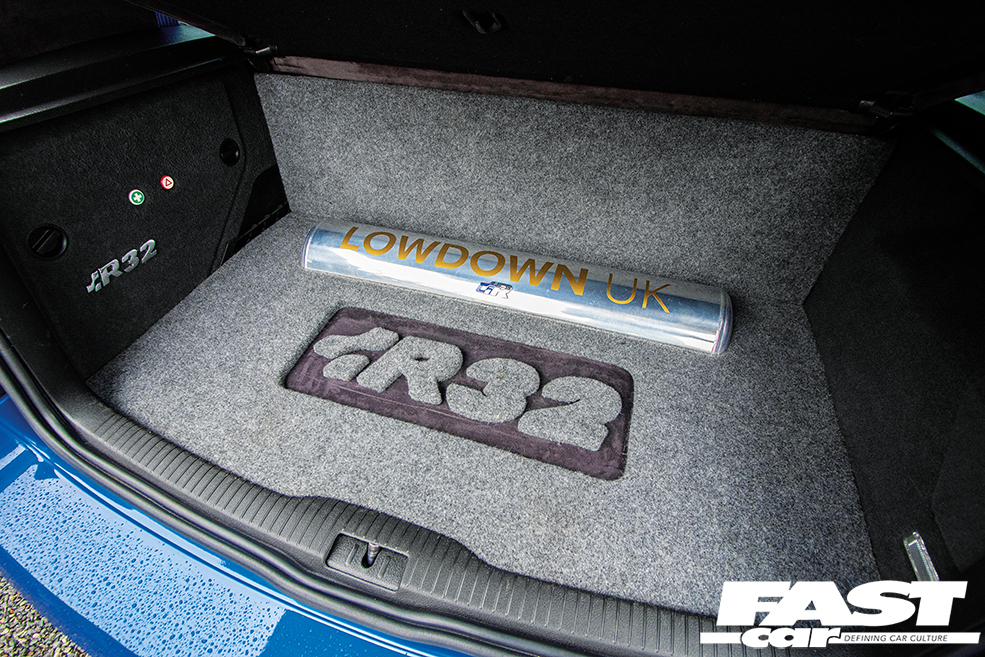 “The car’s running Air Lift Performance suspension, with a custom boot build by Calvin Chinsang,” says Barry. And it now stops just as well as it goes, as a lot of attention has been paid to upgrading the braking system at either end: the Brembo 18Z front calipers work with 334mm discs, Ferodo pads and Hel braided lines to provide superior retardation, and this is augmented by Brembo 4-pot rears. The cabin has been paid similar levels of attention, as this is a holistic build that Barry loves showing as much as driving: those model-specific R32 seats have been retrimmed in blue leather, tastefully complemented by a headlining and pillars retrimmed in Milano suede. Peep at the dash and you’ll spot a very cunning addition: Barry has had the artisans at aRd Technik install a Color MFA. This is a screen that replaces the stock multi-function display, serving up all the standard readouts in full colour; in addition to this it can also read and clear error codes and show VCDS measuring blocks, as well as an acceleration timer, adjustable speed warning alarm, custom boot screens, service intervals, and various other things. Clever, huh? In line with the ultra-modern suspension setup and next-gen brakes, Barry’s modified VW Golf R32 has evolved into something that can still cut it with the hyperhatches in 2022. 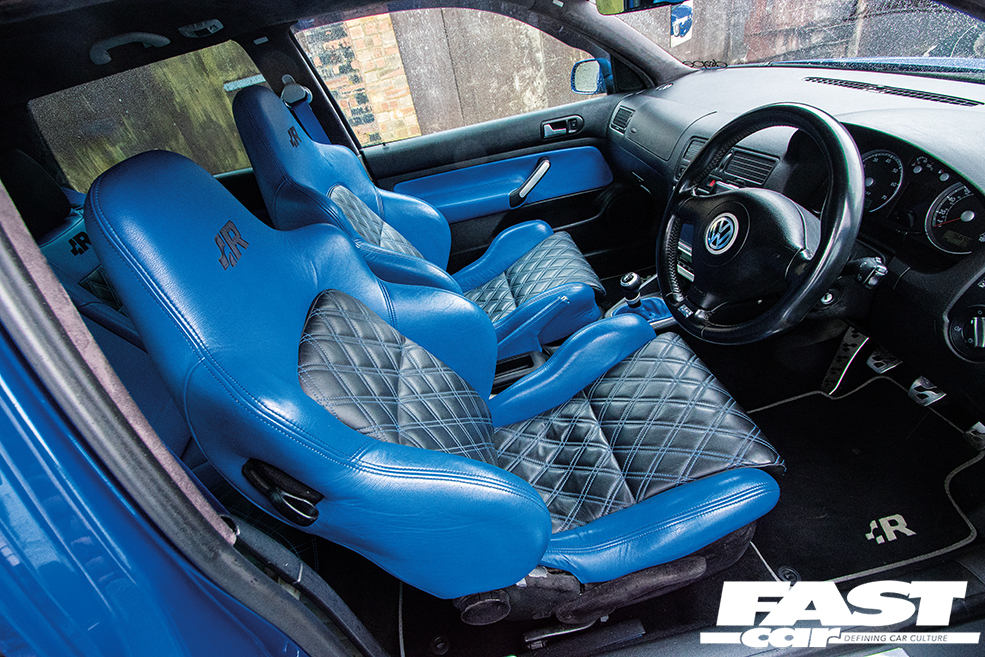 In amongst all of these technological advances, however, Barry’s very clear on the true analogue benefits of this project in the real world. “What I like the most about the car is that I have made a lot of new friends while building it,” he smiles. And there isn’t really any stronger argument than that. In the strange times we live in, bonding over mutual interests is all-important. It’s really spurring him on too, Barry’s hungry for the next stage. “You just cannot beat the sound of the R32,” he says. “I have been out in a few turbocharged and supercharged R32s, but I haven’t made my mind up on what route I’m going to go down in the future.” You can be sure that it’ll be something pretty interesting though. For one thing, we know that this is a man with an eye for quality, with a keenness to see things through and get them done right. And for another, this is his forever car. Not a fleeting fancy like all that came before it, this modified VW Golf R32 is The One. This Wookiee’s going to be howling for Barry for decades.