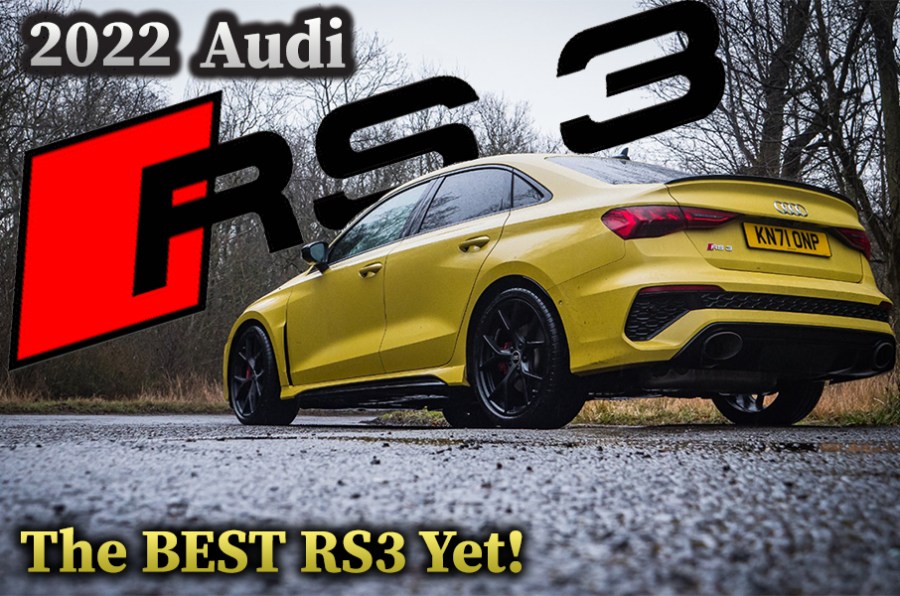 With major chassis changes and more focus on being fun, the 2022 Audi RS3 is the best RS3 yet. Watch as we get behind the wheel of the new Launch Pack Saloon to find out all about it.

Since its launch back in 2010, the Audi RS3 has carried with it a reputation for being a slightly too heavy, slightly too numb, and slightly too under-whelming hot hatch. Sure, it’s thumping great 2.5-litre, turbocharged five-cylinder engine was, and still is, something to marvel over, but when it came to the twisty bits, the front end wanted to wash out wide and you were left feeling frustrated over how good it could be. Thankfully, there’s a new 2022 Audi RS3, and we’ve managed to get our hands on a Launch Pack Saloon car to see how it stacks up against its predecessors.

Let’s start with the figures. Under the bonnet is that fantastic 2.5-litre, turbocharged five-cylinder engine that we’ve seen in several Audis over the years; and in the 2022 Audi RS3, it produces the same 394bhp and 369lb ft of torque as the outgoing model at. As you’d expect, that power is sent to all four wheels via Audi’s quattro system, only in the new RS3 you get a couple of clutches on the rear axle that can split the torque 50-50 to either of the rear wheels.

Audi calls it the “RS Torque Splitter”, but essentially, at any one time, either of the rear wheels could receive 135lb ft of torque, (50% of all available power, front to rear power split is 50:50). In real terms, that means when you’re accelerating out of right turn, more torque will be sent to the outer left wheel in order to rotate the car into the corner. Vice versa for a left turn. The Audi RS3 no longer feels like a heavy, front-wheel-lead hot hatch, and more like a fun, agile, point-to-point missile. 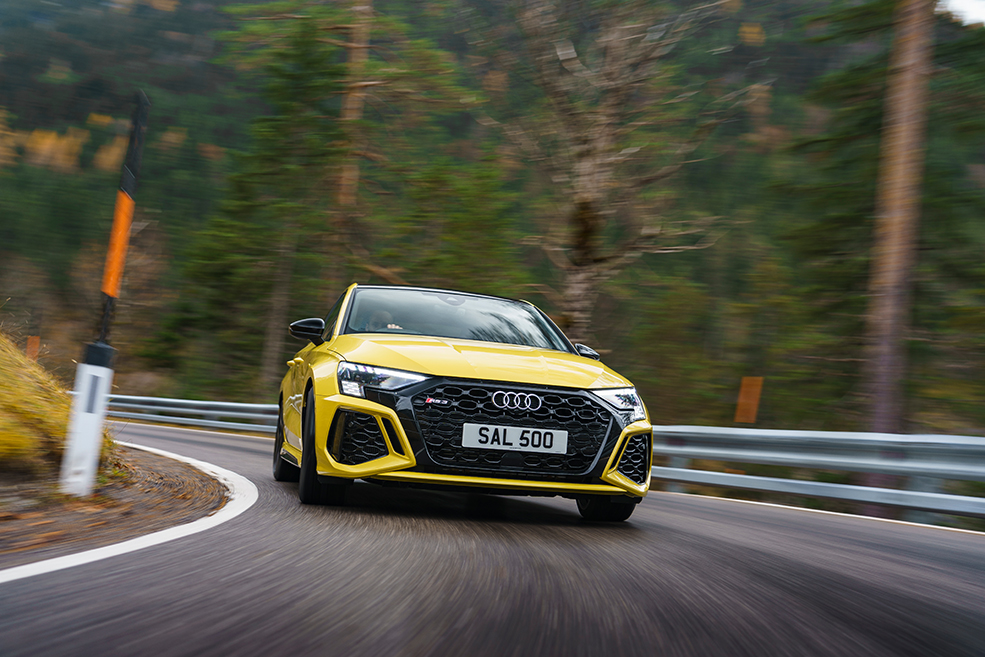 All UK cars are fitted as standard with the “RS Torque Splitter”, they also get adaptive damping so you can soften things down when you want to relax or stiffen things up when you don’t. Also standard is Audi’s new vehicle dynamics controller, which alongside the torque splitter and wider front track (33mm wider than the previous model), helps the 2022 Audi RS3 to be as agile and as sharp as its competitors. The vehicle dynamics controller essentially helps each computer component of the chassis to communicate better with each other, and at a faster rate, to improve its drive.

With umpteen drive modes, damping settings and steering input levels, you can completely customise your driving experience in the Audi RS3. At first it seems a little daunting, but in truth, fine tune it to your driving style and you’ll have a much better car on your hands than if you were to rely on simply one drive mode. In fact, the new Audi RS3 is so finely damped that over a b-road of typical British nature, you glide over bumps, offering confidence to push on. It eats up bumps without a hiccup through the steering wheel, allowing you to place the car across a bumpy road with ease. Harsh, sudden bumps don’t upset the wheel either. It’s a remarkable set up that once coupled with the orchestral brilliance of that five-pot engine will make you lose track of time on any drive. 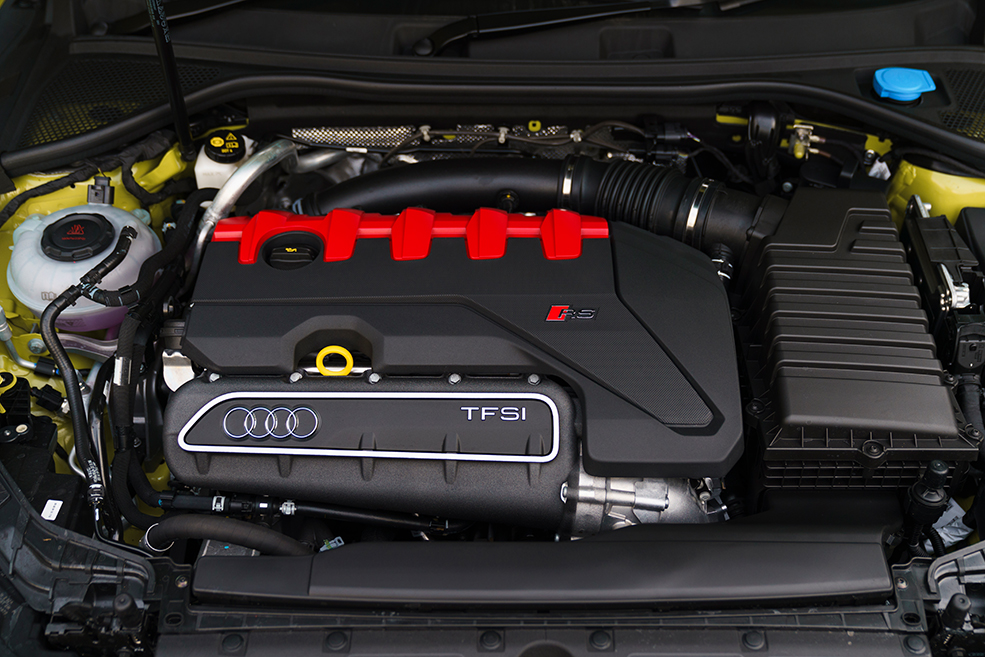 Speaking of which, that engine. Above 3,000rpm, it’s eager to pull, closing in on triple digit speeds in a matter of seconds. Make no mistake, the while the new Audi RS3 doesn’t get any more power over its predecessor, its still blisteringly fast. In this Launch Pack car, the new limiter is 174mph! Sadly, though, it does have its issues. Firstly, anything under 3,000rpm and the 2022 Audi RS3 feels lethargic and lazy, similar to that of a ‘90s turbocharged Jap car. It’s frustrating as when the boost does build, the torque propels the car down the road at a phenomenal rate, but around town it feels heavy and lacklustre, forcing you to use more throttle input before then slingshotting you towards the car in front. It takes time to adjust to, but we found driving it in a sharper engine mode but with softened dampers helped day-to-day driving.

Here, we’ve been driving the Saloon variant, which Audi sells roughly 50% fewer of compared to the Sportback. Underneath and inside, both cars are virtually identical, so the choice is split between which body you prefer. Personally, the Saloon looks more elegant, and given its rarity in comparison to the Sportback, you get the added kudos of seeing fewer of them on the road, which ticks my box. 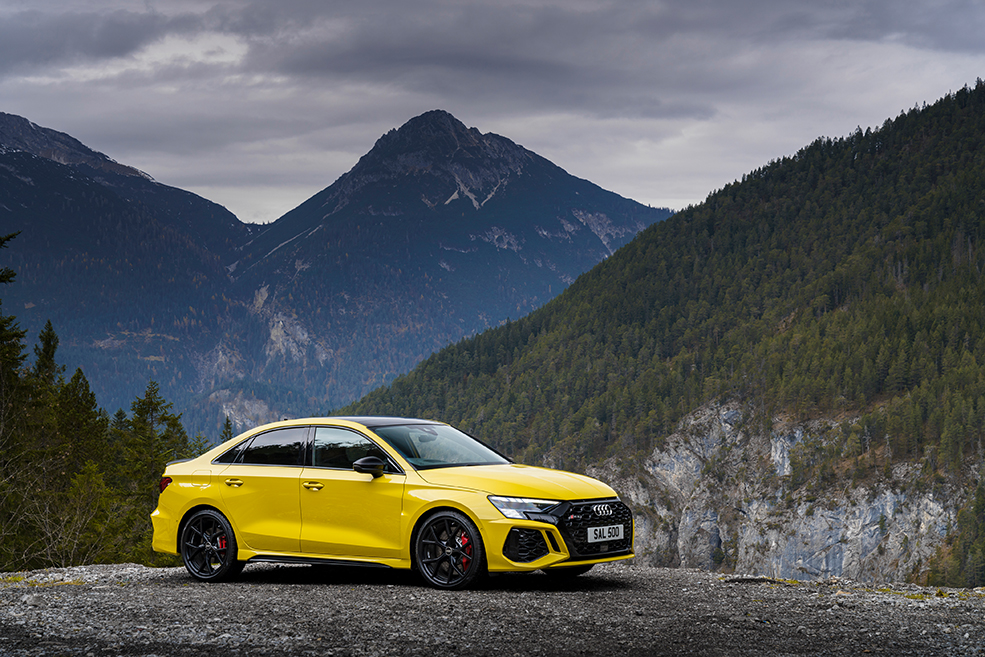 This Launch Pack car gets darkened trim, bigger wheels and an optional RS Sports exhaust system, although in all honesty, it’s not exactly that audible. Save your money and go for something from the aftermarket if you really want to hear that five-pot sing.

With the changes to the chassis and the inclusion of the clutches on the rear axle, the 2022 Audi RS3 is the best RS3 yet. Audi has managed to combat its understeer nature so much so that you can now go sideways if you really wanted to. It feels far more agile than any RS3 before, and while the five-pot engine has its frustrations at low speeds, when the going gets tough, its performance and sound make you forget about its issues. There is one issue though, and that’s the £60k price tag. It’s not cheap, no matter how you look at it. But what you have to remember is that this is a car that can do it all, it has the space for a weekend away, the comfort to commute day to day, and the performance to leave anything this side of a supercar in its dust. 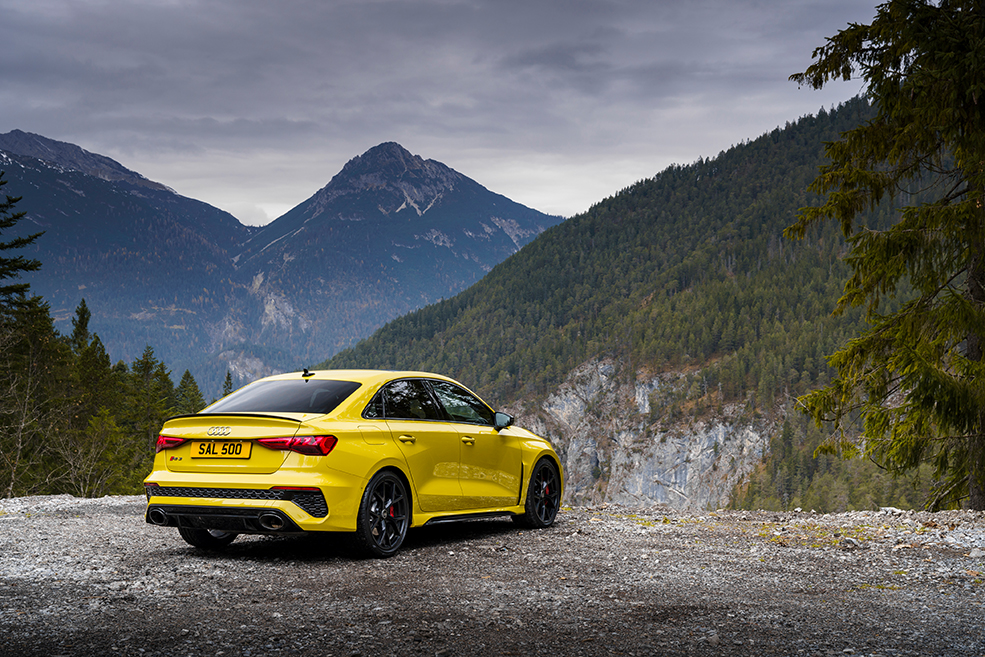