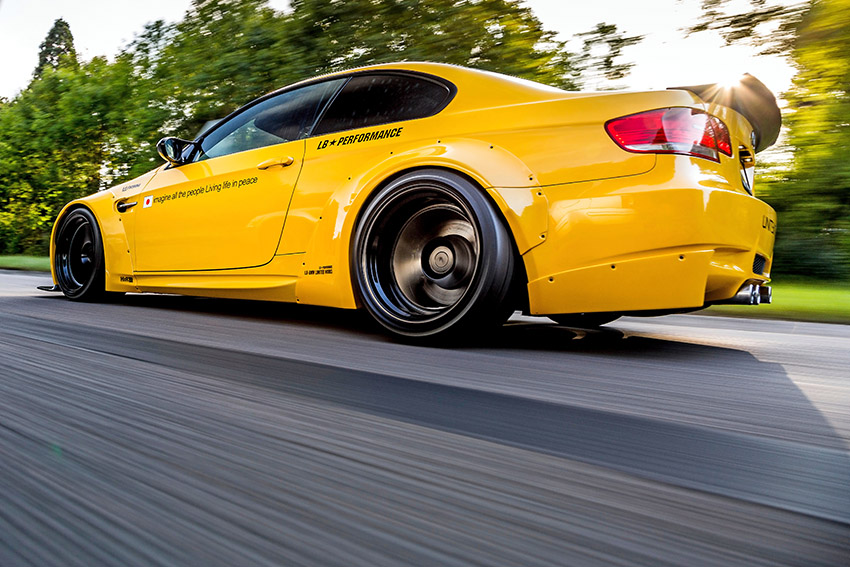 Stance. What is it and how do you do it to your car? We look at how to stance your car, whether that’s for track, fast road or just for show.

Show versus Go: it’s the age-old trade-off. Obviously you don’t want to leave your car at its factory-standard ride height, unless you’re some kind of square. But getting that booty closer to the ground goes deeper than just shoving a set of cut springs in there.

Are you lowering for jaw-dropping looks, or to make it unbeatable on the track and country lanes? Do you want form or function? Or can you actually have both?

What is stance and fitment?

Stance, fitment, take your pick – these are terms referring to the act of getting your car sitting just right, with the wheel-to-arch interface carefully considered. There are a number of ways to go about this; aggressive fitment sees wide wheels on stretched tyres working with negative camber to get the rim as close to the arch as possible. And for some, the more aggressive the better!

Tuck and poke refer to the position of the wheels: the latter sees the rims sitting proud of the arches, while the former hides them back inside the arches like a retro Touring Car. Flush (and for the hardcore, hellaflush) requires precise measurements to get the wheel rim perfectly adjacent to the edge of the arch. It’s something of a dark art! 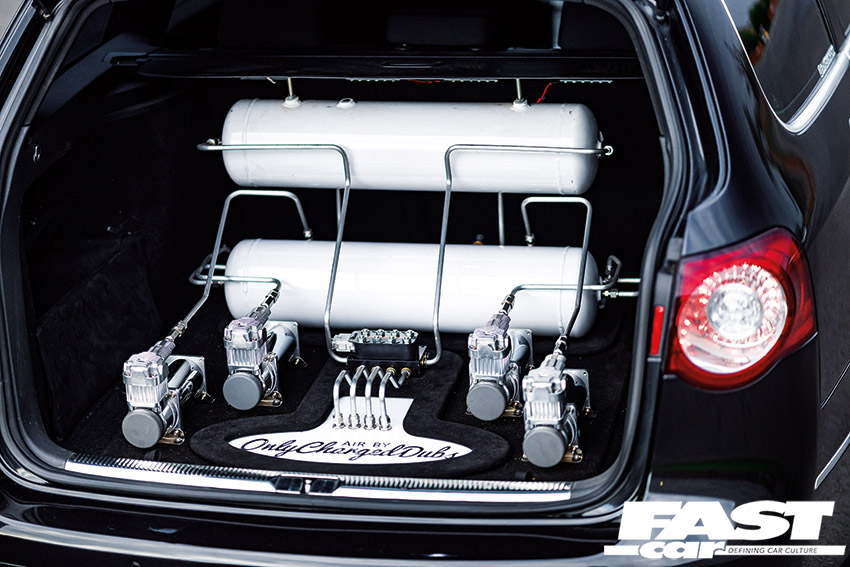 What are bags on air ride systems?

There are two principle ways to stance your car – static, or non-static. If you’re running static, that means your car is always that low: you’ve got it set up on coilovers (or shorter springs) and you live with the compromise of clattering speedbumps and cats-eyes for the sake of the look and the respect static life brings.

Your non-static options are essentially air ride or hydraulics, although there are a few halfway methods too (like running air cups on top of your dampers). This approach allows you to hard-park the car at shows – or just at the supermarket, prompting old people to say ‘That’s ridiculous, how can you drive it like that?’ – before flipping a switch and raising it up to drive away.

Modern air-ride management systems offer such features as self-levelling, regardless of load, and preset adjustable heights – just like the hydropneumatic suspension on an old Citroën! With this level of complexity, it goes without saying that bagging your car – which refers to adding air bags within the suspension system alongside lines and a compressor to increase or decrease the ride height –  is a lot more expensive than rolling static… although if you’re able to put together and install your own system, it mightn’t be as pricey as you’d think.

Check out our air ride suspension guide to learn more about bagging your car. 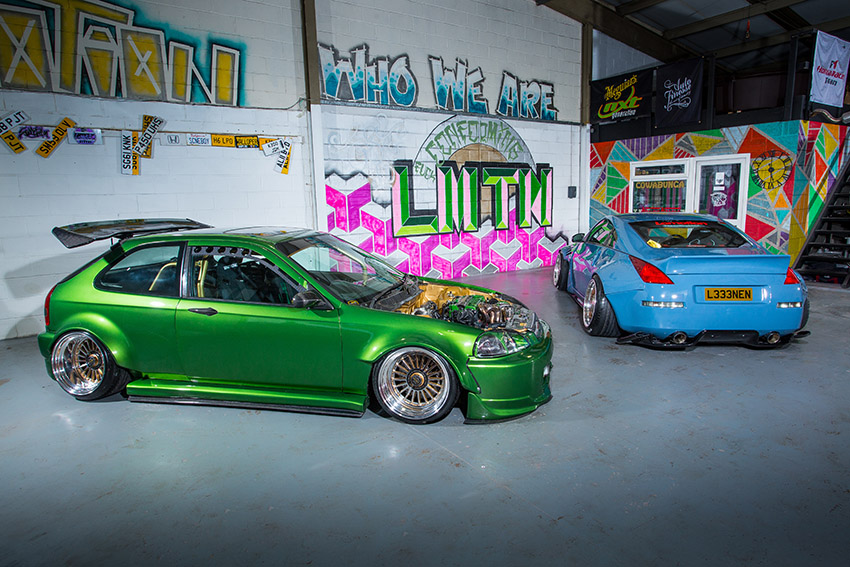 When you’re running low, your chassis is going to bang into stuff, that’s a given. And also, when you’re altering your car from manufacturer specs, you may find that things like driveshafts, suspension components and so on don’t fit where you want them to – so chassis notching is the answer: cutting non-structural sections out of the underbelly to give those parts somewhere to go!

A more extreme approach is channelling, something that old-school hot-rodders were big into: with a classic body-on-frame car, you’d lift the body off, rework the chassis mounting points so they joined the body higher up, and voila – when you reattach the body it’s lower to the ground without messing with the suspension at all! 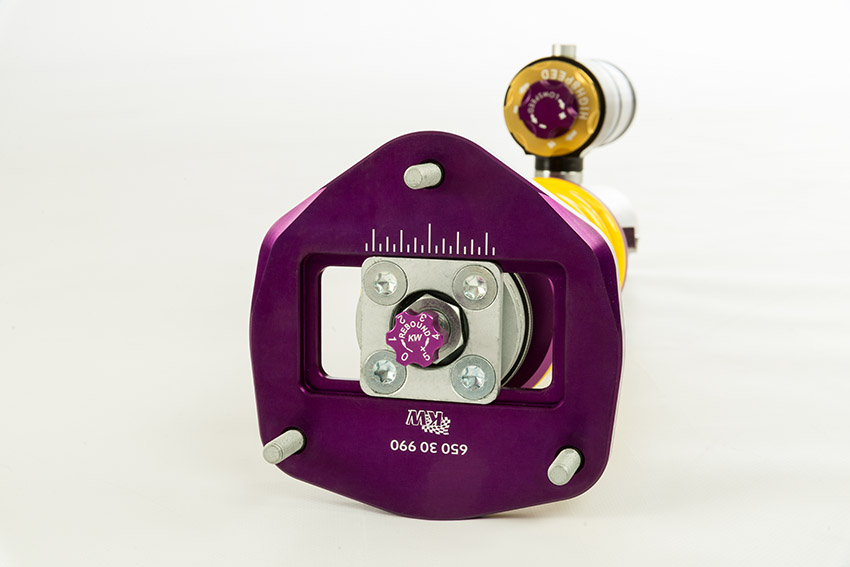 What parts do I need to stance my car?

What do you need to achieve heroic lows and stance your car? Well, once you’ve decided whether to run with coils or air ride/hydros and have sourced the requisite parts, you’ll need a bunch of other stuff to go with it. Adjustable top mounts and camber arms will help you achieve sweet angles, and you’ll need to give serious consideration to the widths and offsets of your wheels, and think about using spacers to get them sitting precisely where you want them. It’s not just the widths of the wheels either – carefully measuring tyre widths and seeing how other people have achieved the look with a similar setup will help you to figure out exactly the amount of sidewall stretch you can get away with.

Haters often whine about stretch but it isn’t the devil – plenty of pro drift cars run oodles of stretch without the tyres popping off the rims. But be aware that you’ve reduced your contact patch, particularly if you’re running a lot of camber, and you’ll be killing tyres quicker and will have less grip. You might also garner unwanted attention from the fuzz! So find your own compromise between sensibleness and extremity. It’s a totally personal thing. 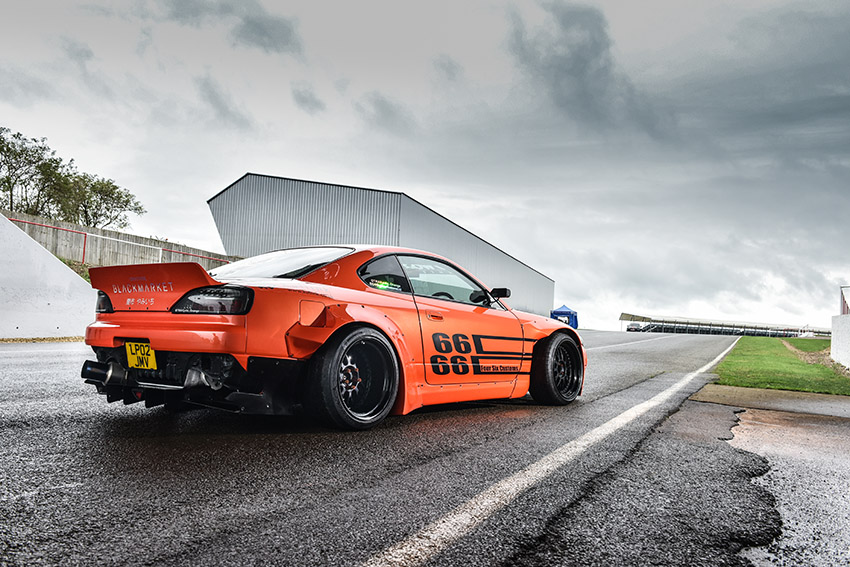 How To Stance Your Car – Fast Road/Track Stance

In motorsport, running lower and wider is vital – it lowers your centre of gravity (which makes the car more stable and less wallowy), and extra width brings extra grip. It’s for this reason that sports cars are low and wide too, and why we all want to emulate that stance with our own projects.

For many people modifying cars, lowering a car isn’t about showing off, but improving the drive – the ice-cool look is simply an extra benefit of having a better driver’s car. 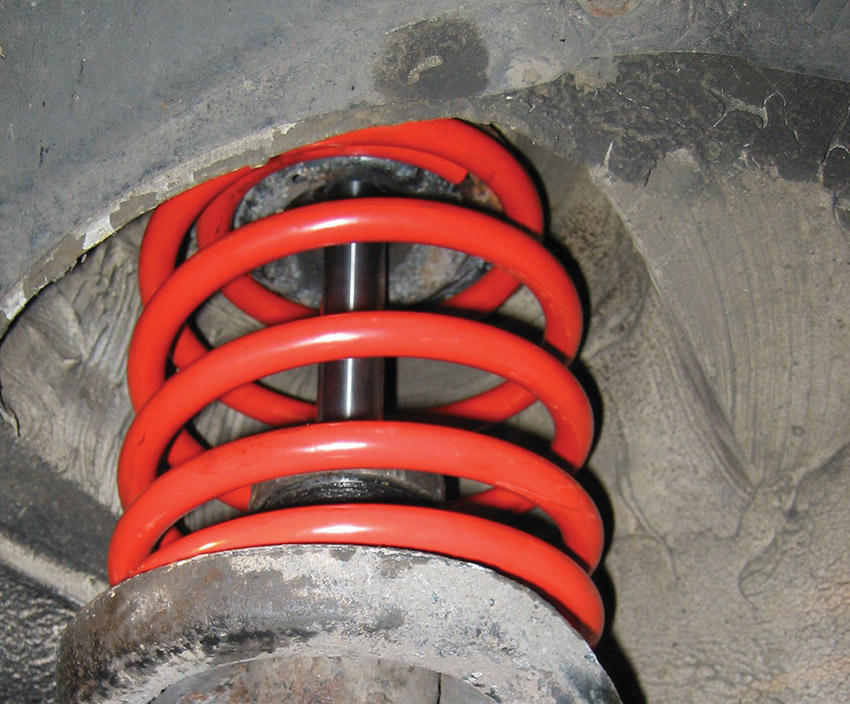 Should I get lowering springs to stance my car?

The cheapest way to lower your car is to swap the stock springs for lowering springs. If you get progressively-wound ones, they’ll be soft and compliant when you’re pootling around, and firm when you’re being aggressive.

What’s the advantage of stiffer springs? You get less body roll in corners, and also less compression under weight transfer (i.e. when harshly braking or accelerating).

The next step up is to replace the dampers. You can either go for adjustable dampers with matching springs, or all-in-one adjustable coilover units. Either way you can place the height of the car just where you want it, allowing you to tailor it perfectly to whichever track or roads you’re tackling. The key here is to get it sufficiently low to improve the handling, without going so low that the wheels are rubbing the arches. Much like with static fitment, fine-tuning motorsport stance is an intricate art.

It’s also worth noting that, despite what some people will tell you, decent air-ride setups are designed for track use – Air Lift Performance kits, for example, offer incredible adjustability and stability along with OEM-quality fittings. 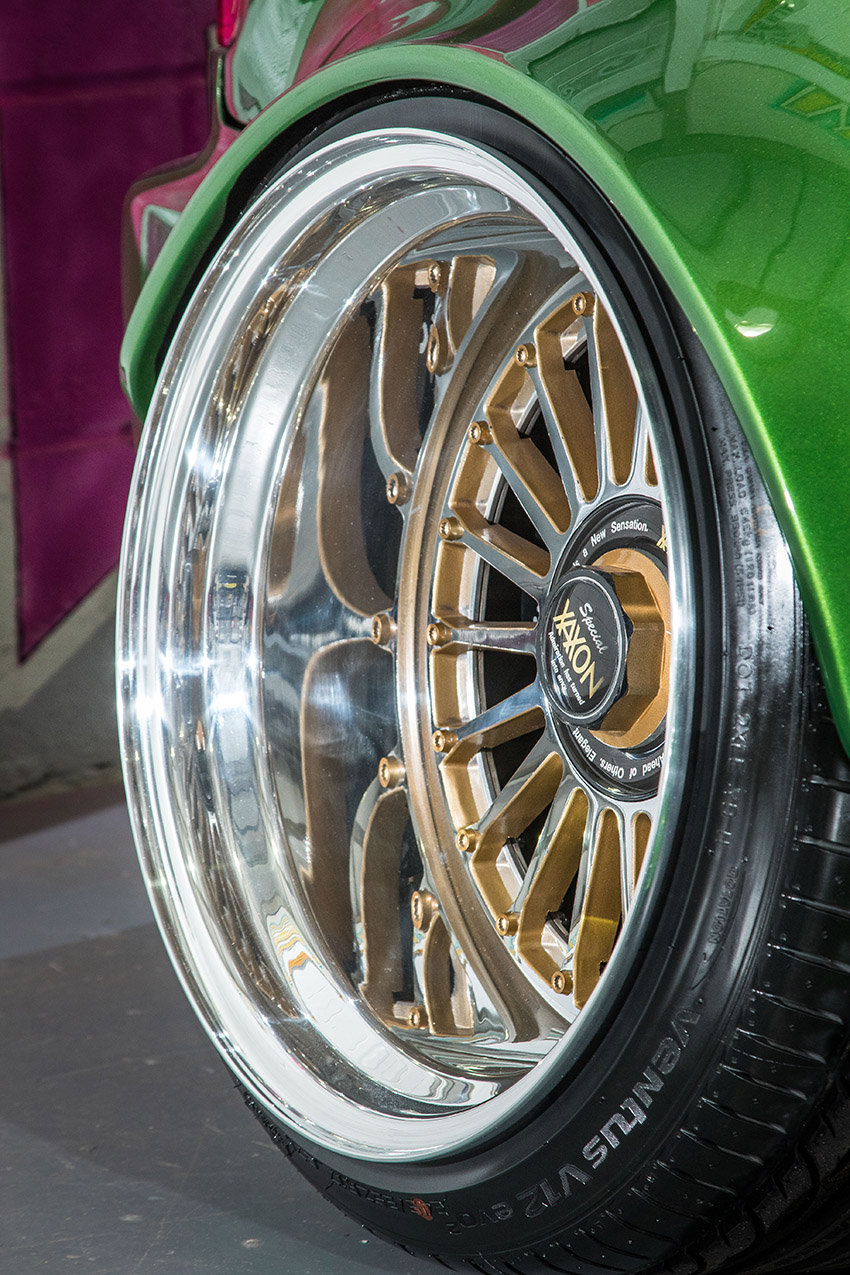 How To Stance Your Car – Tyres

Tyres are everything here, being the only part of the car that’s in contact with the road. Consider your negative camber angle carefully, as camber improves grip under cornering but you want to have as much contact patch as possible on the straights, too! Sticky soft-compound tyres will help you claw at the tarmac; you can’t run slicks on the road, but something like a Nankang AR-1 is the next best thing. You want a nice stiff sidewall here as well – a surprising amount of a road car’s suspension is provided by the sidewall; choosing something firm, square-shouldered and low-profile will reduce compression under cornering.

How To Stance Your Car – Wheels

Wheels need to be chosen well. Don’t just think about the pretty design and the diameter, but the construction, weight and width. Wider is better in terms of grip, and lightweight wheels will reduce unsprung mass (i.e. the mass of everything not attached upwards of the suspension), so the suspension will have less work to do and thus be more efficient. Something like an OZ Ultraleggera will offer a remarkable weight saving over stock rims. 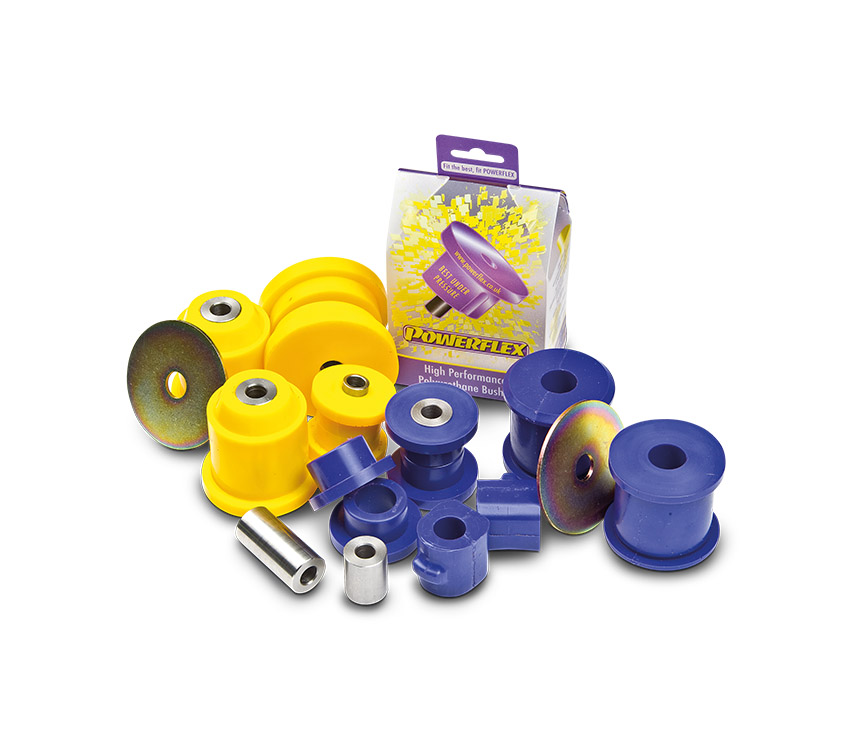 Replacing your car’s bushes with polyurethane items is an involved task (there’s a lot of them, and they won’t want to come out), but it’ll tighten everything up to maximise the effect of your wheel, tyre and suspension mods. Fitting strut braces, chassis braces, and even a roll cage will get things even stiffer.

The idea is that stiffer is better. Naturally this will mean that your car’s comfort is massively compromised, but you didn’t do this to be decadently luxurious, did you?

Check out our polybushes guide to learn more about stiffening up your car.