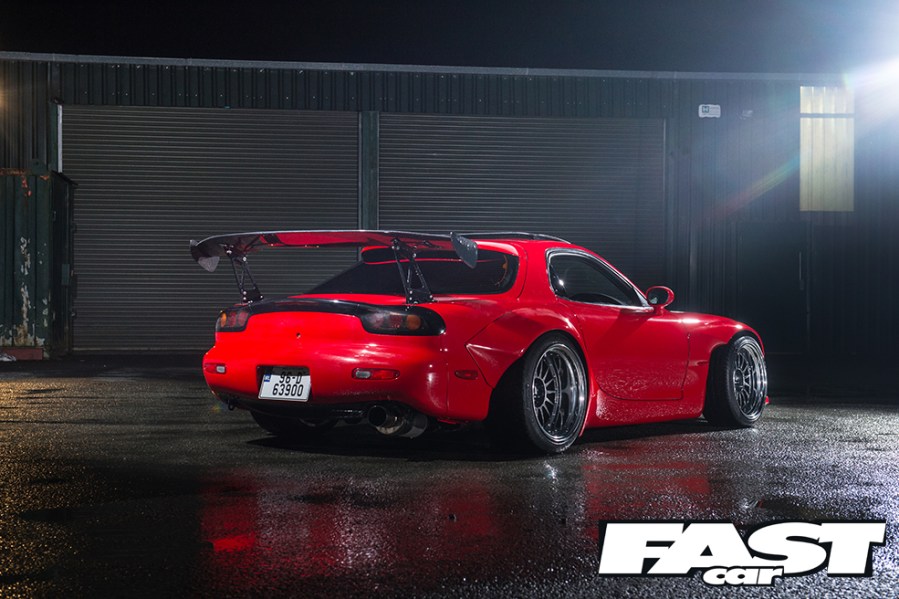 Engine swapped tuned Mazda RX-7s are always controversial. Even more so if it’s an engine a Honda S2000!

There’s no doubt the Mazda rotary engine is an awesome piece of kit. Nobody could think any differently if they experienced a really good one. Which is why rotary fans are fanatical – usually disgusted by the mere thought of swapping a piston engine in to a RX-7.

The trouble is, the rotary engine is temperamental at best, a nightmare at worst, and more suited to a race car than an every day road car. So probably more people have experienced the bad sides to them than the good, and that’s given them a somewhat undeservedly bad reputation.

The engines might scare off a lot of people. But the rest of the car, well, nobody in their right mind can say they’re anything but awesome. Stunning looks, big brakes, great handling, and a large engine bay, means they’re one of the most popular cars to do an engine swap on. Much to the horror of the rotary fans.

A lot of the arguments rotary fans have against engine swaps is they go against the original feel of the car, that the high-revving, screaming, turbocharged engine is part of what makes an RX-7 so special, and to be honest, they do have a good point.

But what about if you fitted an engine that revved just as high, was also turbocharged, and is capable of making just as much power? Well, that’s exactly what Alvi, the owner of this stunning looking tuned Mazda RX-7 FD, has done. And you’ve got to be an absolute rotary fanatic not to love the result.

As first impressions of a rotary goes, Alvi honestly couldn’t have had it much worse with this FD. While it was a rare sunroof model, it had an automatic gearbox. It had damage to the door locks and wiring as some scumbags had attempted to steal it. And to make it worse, once he got it started it had a misfire, which he quickly realised was more than just an ignition problem. The car had the dreaded rotary engine issues.

At this point most RX-7 owners start Googling prices for V8 conversion kits. But rather than instantly quit rotary life before it even started, Alvi started by seeing if the rotary could be saved. “I took the rotary apart to see what was wrong. But it wasn’t good news. A lot of the parts had turned blue from being badly overheated, and it looked like the previous owner had ran it low on oil. Most of the main parts were scrap” he explained. While a typical rotary rebuild is cheap compared to many piston engines, the serious engine damage meant he’d almost be starting from scratch and the cost was huge. So Alvi decided to look into alternative engine options.

After much deliberation, the engine choice was made, and for two reasons. Firstly, the high revving nature of the rotary is all part of the fun. And secondly, Alvi always fancied a Honda S2000 but found he was too tall to comfortably drive one. So the engine swap he chose was, yes, a Honda F20C lump from a S2000!

Honda engines get a lot of stick from non-Honda fans for lacking torque. But they do make massive power for their capacity, and are capable of huge revs too, which in essence is exactly like a rotary engine, but unlike these, Hondas are famous for their reliability.

But what about the turbo? A big reason there’s less love for the RX-8 over the RX-7 is that while it also revs to the moon, it lacks the turbo an RX-7 does to make really big power and torque. And so does the F20C lump. Well, usually…

“I bought a crash damaged S2000 as a donor car, and completed the swap in about four months” Alvi explains. It wasn’t an easy swap, with loads of custom parts, but he’s very handy with the spanners and built almost all of this car himself. The only help he needed was on the wiring side of things, to get the engine running and the S2000 digital dash working fully.

“I drove it around at first in N/A form, but soon enough I decided to boost it” he explains. And this is where the engine swap gets really interesting.

Thanks to the big engine bay of the FD and the popularity of turbocharging the F20C engine, it was always a good idea. But while everyone’s got their chosen tuners, and it’s certainly worth travelling to get the service you’re happy with, Alvi’s choice was further than most. In Lithuania. 1,800 miles away from his home in Ireland!

“I shipped the car over to Lithuania to HondaTuning.Lt to get the turbo conversion done, as I know they do a great job. I got them to build me a custom manifold, downpipe, intercooler, as well as map it on an AEM engine management once it was all complete,” he says.

The result, with the car running a BorgWarner EFR7163 turbo, was 403bhp at just 14psi boost, and a whole lot more to come once Alvi chooses to up the boost. The peak number is far from shy in a pretty light car like an FD RX-7, but what really makes it special is how massive the powerband is. Full boost is at around 4,000rpm, giving the car far more low down grunt than the standard F20C engine. But the rev limit is at a massive 9,200rpm, so it’s actually far revvier than the original rotary engine, eliminating the one big thing the anti-swap people state as why to keep the original lump!

When the F20C turbo setup was first completed the car was still silver with standard bodywork and skinny factory tyres. Alvi says it was an interesting drive to say the least! “When I got the car back it was dangerous to drive, easily spinning in third gear on dry tarmac as soon as it was on boost. The standard tyres were only 205/50×16!” he laughs.

The FD in this deathtrap spec thankfully didn’t last long, as he already had plans to strip it down to a shell and make the show match its new-found go, in the form of ultra-deep dish SSR Professor TF1 wheels along with Rocket Bunny wide arches and a whole host of custom bodywork.

Rather than fitting a full RB kit like so many FD RX-7s out there, Alvi chose to just use the arches and side skirts, albeit bonded on with all the rivet holes filled for a smoother look. Rather than the typical wild front bumpers or even the more slab sided Rocket Bunny one might use, Alvi went for a ’99 spec standard front bumper and splitter, and the result is a classier, more factory-look than usual.

It works fantastically, making for a stunning looking car that still stands out a mile without looking over the top. With the car now packing a high revving turbocharged engine and the amazing looks to match, does that mean the car is complete? Hell no, of course not, that’s never the way with true modified car fans!

“The car drives great now, and unlike so many rotaries it starts every time no problem. But it’s still not complete and I don’t think it ever will be” says Alvi. “For the bodywork, I want to fit front and rear diffusers, and I’ve decided to go for a Rocket Bunny ducktail rear spoiler too. For the engine, I want to modify the layout a little and improve the cooling system, then go for 500bhp; the engine and turbo can take it easily”.

He’s right too, Honda haters say a lot of things, but big power, huge revs, and reliability, is surely every rotary purists dream setup. So, deep down, surely they’d secretly like this swap?!

CHEERS TO
Julius Jurkunas at JJ Autos Body Works; Irmantas Katinas; my family and friends for all the help and support; Also, check out my
Instagram @alvo_motors.