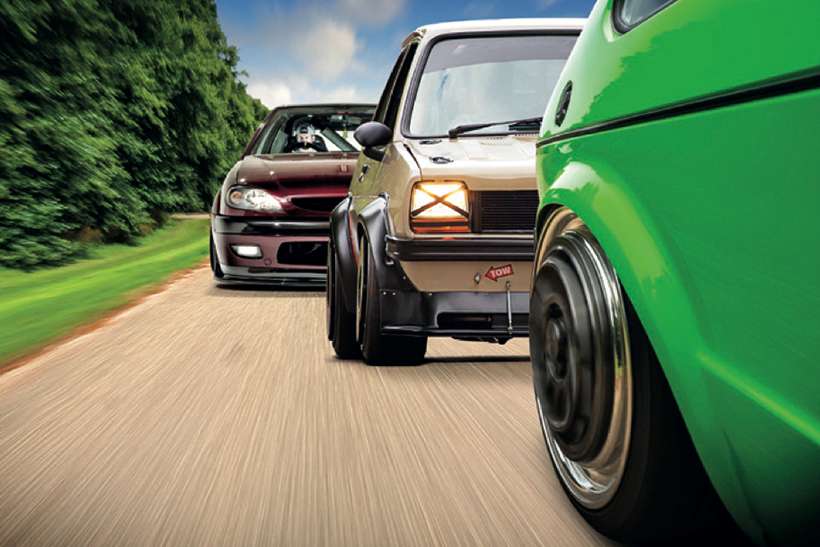 Professor Stephen Hawking’s ‘A Brief History of Time’ will tell you all you need to know about cosmology. But this is even better! We’re looking at the styles and trends of fiddling about and modifying cars over the ages… and that’s truly cosmic. Particularly that weird bit in the 1970s.

For as long as cars have existed, people have wanted to muck about with them. Ever since mankind first started nailing together automobiles as an alternative to horses, plucky young daredevils have been uprating parts and getting up to mischief. Early hot-rodders blew off steam in the wake of various wars and military tours by getting together to share their skills in the pursuit of going faster; NASCAR evolved from the criminal element’s enthusiasm for building super-fast sleepers for bootlegging purposes – and it’s not all battlefields and moonshine. It’s a basic, ingrained human behaviour. We’re compelled to modify our cars because, well, we just have to. And there’s a whole weight of history behind this that we can happily blame for it all. 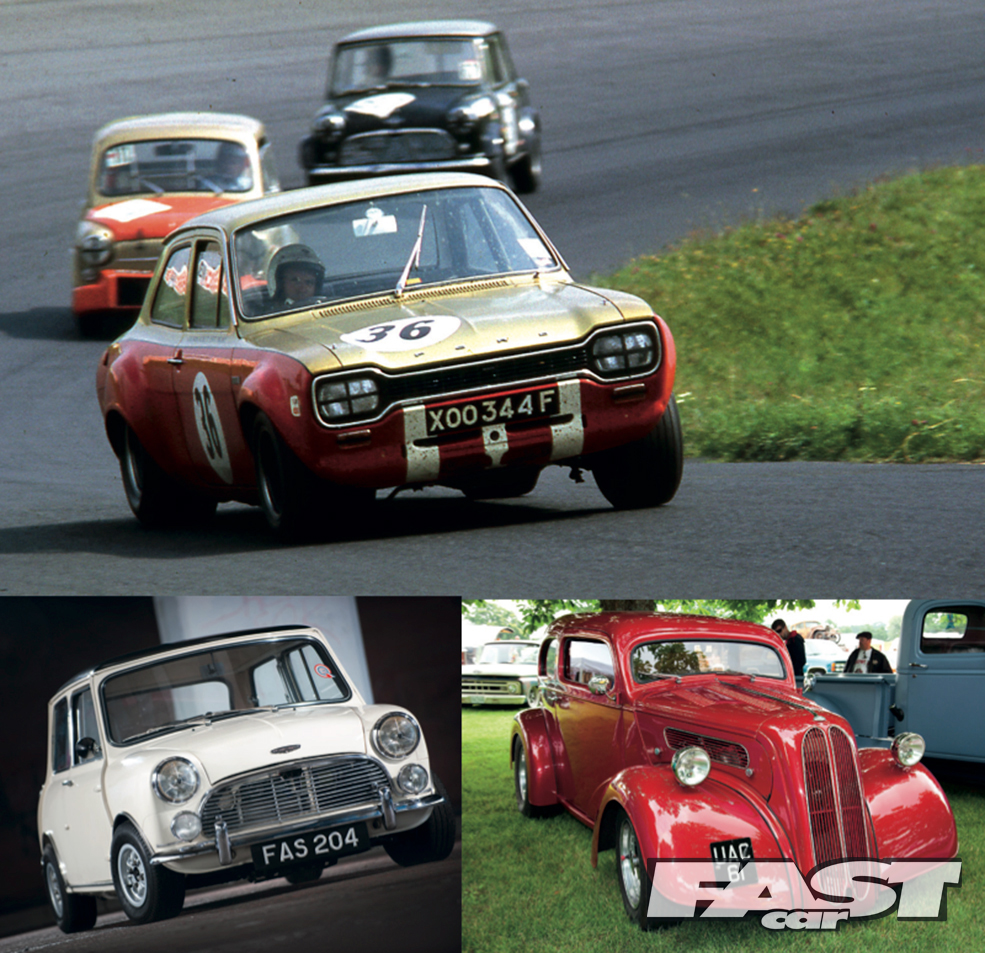 1960S
If there was one major catalyst for car modifying in the 1960s, it was the Mini. We don’t need to reiterate here how mould- breaking a concept the little car was (transverse engine, affordable, economical, blah blah), but when people switched on to how tunable they were, all bets were off. While the factory-modded examples were frisky enough – just try counting the race and rally victories of the Coopers – it was the simplicity of the Mini’s mechanicals that really turned people on to pulling their cars apart and building them up as racier variants.

OK, so the Sixties really saw two major catalysts. The second was racing. There was a clear ‘Win on Sunday, sell on Monday’ ethos bubbling through the UK’s circuits, particularly in the field of Touring Car racing (or, as it was better known then, Saloon Car racing), with the race cars people saw on TV looking exactly like stickered up versions of their own cars. So that’s what people did. Take a bit of altitude out of the arches, add a bit of girth to the rubber, slam in a hot cam and some juicier carbs, and voila – you’ve got yourself a road-racer. Something you could easily do in your garage, without the perils of recalcitrant ECUs or nagging CANbus. The 1960s were a golden age of home tuning. 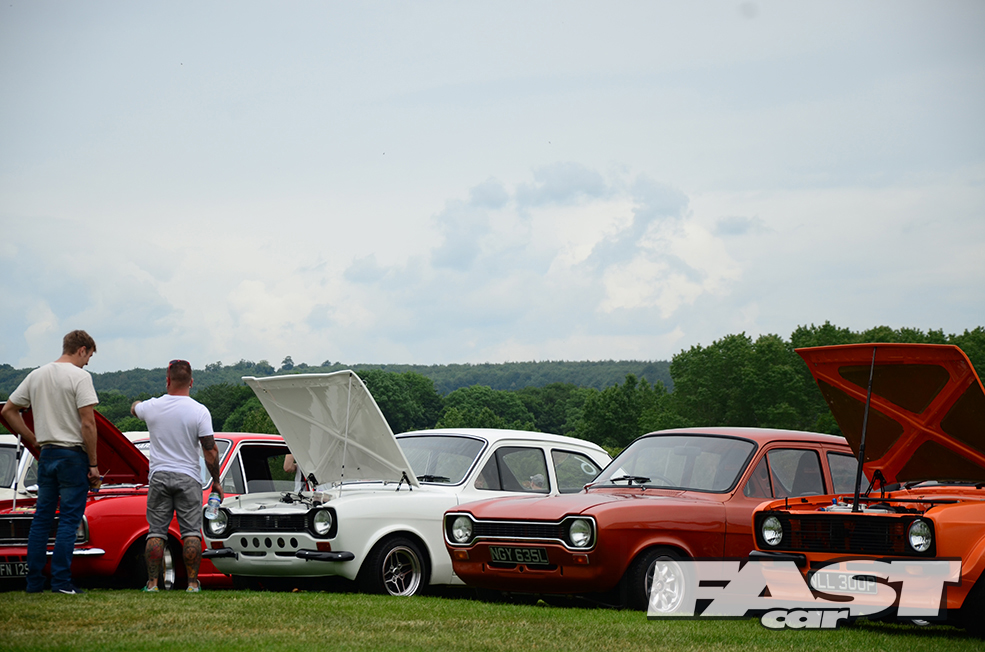 1970S
The 1970s really were a time of modifying excess. Sod the oil crisis, people wanted to go out there and extreme. Anyone who was anyone was rocking shagpile carpets, porthole windows, metalflake paint in lurid dodgem patterns, jacked-up rear ends to showcase their Jag diffs and IRS… and this was a treatment that worked on any vehicle, from the Morris Minor to the Bedford CF, the Mk1 Escort to the MGB. The era of the custom van came screaming in from leftfield, while the American influence saw whacking great V8s (usually Rover V8s, but hey, they’re basically Buick engines) being shoehorned into any- and everything. Airbrushing was kind of a big deal too – what better way to jazz up your ride than by adorning it with a mural of a buxom wench cavorting with a dragon? 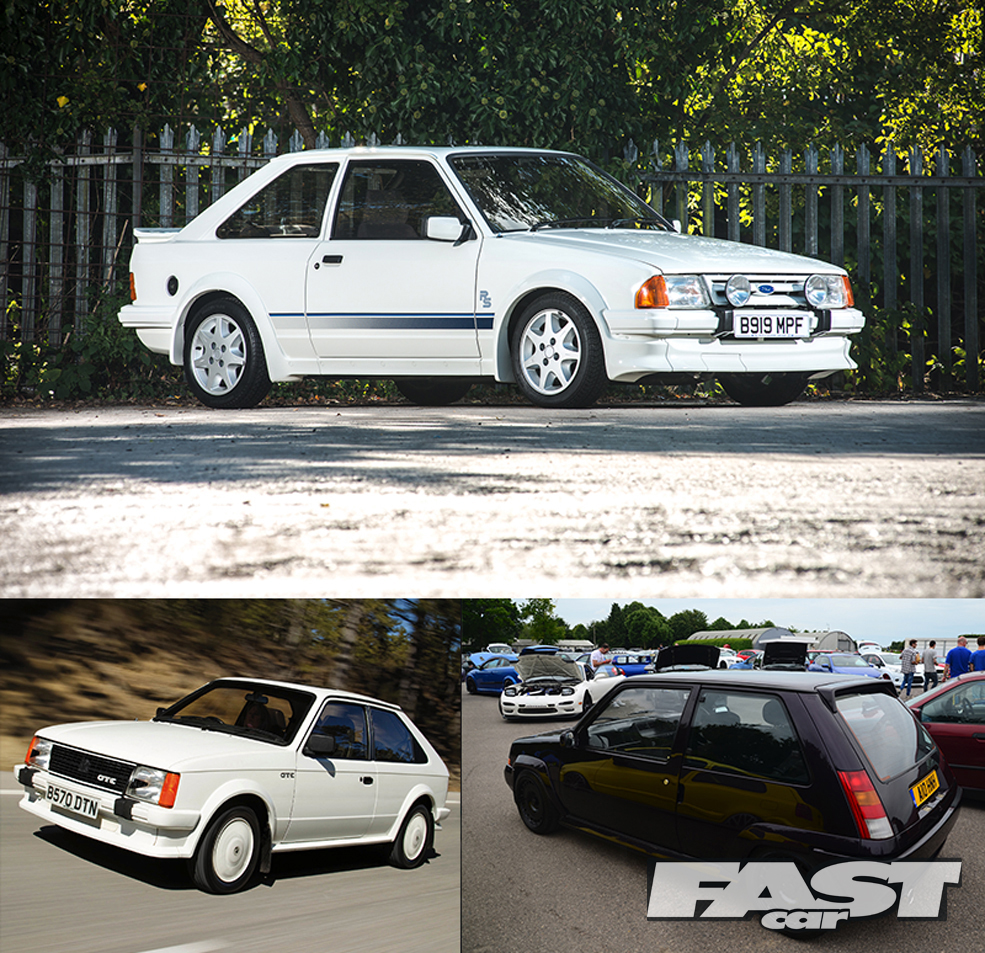 1980s
The Eighties were the era of the hot hatch. This new-found thrill represented everyman performance in a brilliantly accessible package; everyone from Clarence at Lloyd’s of London to Bob at Jewson’s hankered after a Golf GTI, Astra GTE or 205 GTI. And forced induction was rearing its head too, with the 5 GT Turbo, Escort RS Turbo, Uno Turbo and Maestro Turbo offering up whistly thrills.

And how did people modify these cars? Why, with plastic, of course. It was the 1980s, the decade that celebrated plastics more than any other. Window louvres were bang on trend (and these things are cyclical of course, they’re so hot right now in 2016 too), but the real big business lay in bodykits. Take RGM as your prime example – they made spoilers, skirts and bumper extensions for everything. And they were just one of many – all the cool kids had an assortment of plastic addenda bolted onto their cars; all colour-coded, of course, and if the wheels were colour-coded too, all the better.

That was actually a massive deal, making everything the same colour; it was supremely de rigueur to ensure that your bumpers matched your bodywork, your interior was trimmed in the same hue, every conceivable surface was coded to match. And because it was the Eighties, the more lurid the shade the better. Neon pink, anyone?

Oh, and don’t forget the tiger stripes. Your Series One RS Turbo was nothing without random blue slashes in various shades stuck all over it. Wonder when they’ll be making a comeback? Now there’s a thought! 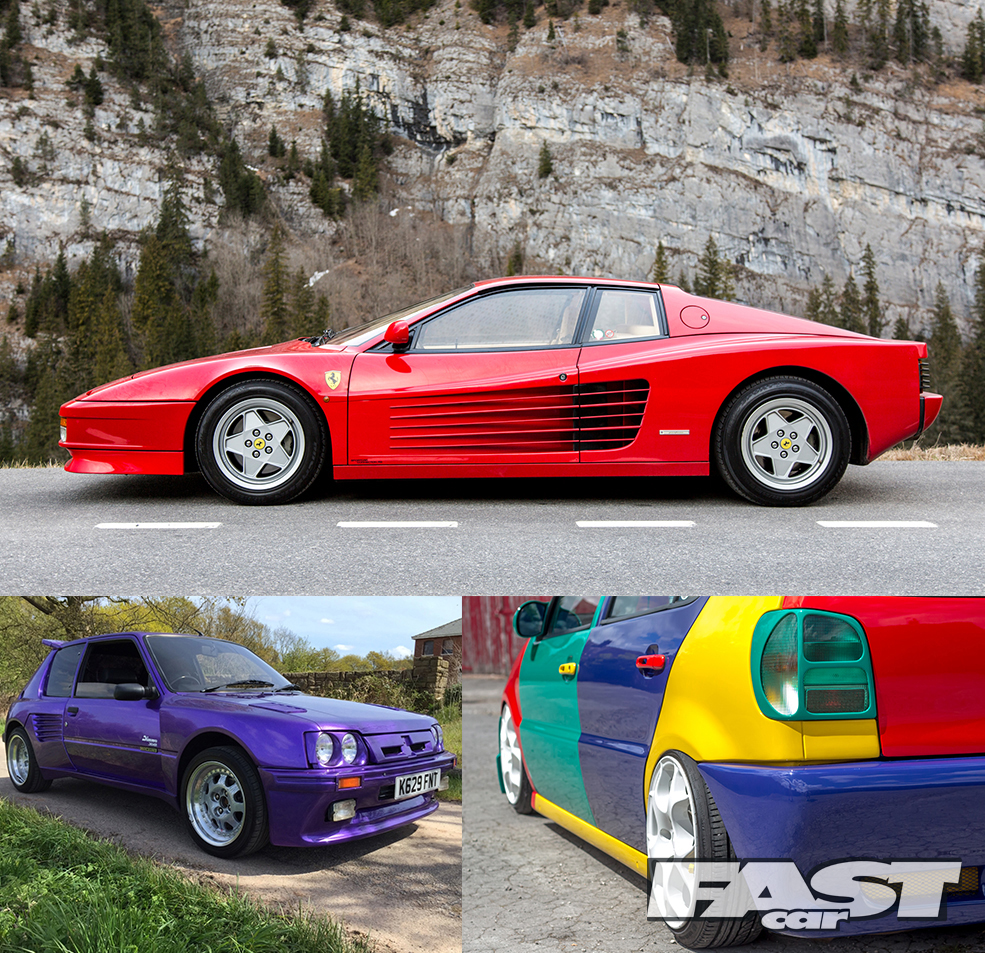 1990s
The keenness for bodykits really amped up in the Nineties; the Ferrari Testarossa 512TR (91-94) in particular seemed to capture the public imagination, with everyone clamouring for sidestrakes – Rieger Tuning led the charge here, making extravagantly straked widebody kits for E30 BMWs, Escorts, Corrados, you name it. Skeete’s GT Turbos were similarly broad, and Dimma just wanted to widen absolutely everything.

As the decade wore on, aesthetic treatments grew ever-more extreme; we moved from a keenness for wheels like the TSW Venom and the Smiths Twister – ooh, and three-spokes, of course, a hangover from the Eighties – to bolder aesthetic endeavours. Headlight swaps from other cars were where it was at, along with smoothed bodywork, bad-boy bonnets, oodles of mesh, wing vents from Mercedes vans, the biggest rims possible (remember when wheel manufacturers started making 19-inch rims in 6 and 7-inch widths? Suddenly nineteens fitted on Novas! As long as you weren’t bothered about going round corners), and people took a lot of influence from France – in particular their desire to morph mainstream hatchbacks into unrecognisable shapes.

Round the back, the Peco Big Bore 4 made way for quad 5-inch tails. Bigger was better. The Nineties were also the era of the outré stereo install. Double-DIN Mini-Disc units fused with astoundingly intricate fibreglass enclosures housing numerous subs, illuminated amps and arty components. You needed to match this with extravagant door builds filled with speakers too. It was all about that bass.

Probably best if we don’t mention the Lexus lights though, yeah? Let’s leave them where they belong – in the past. Or in the bin. 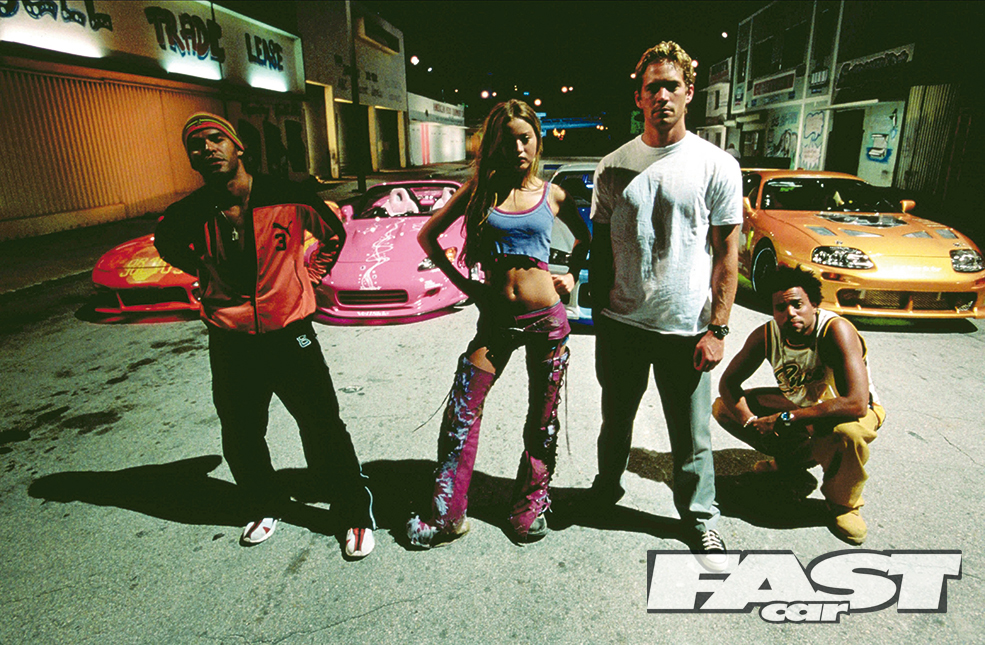 2000s
If there’s one cultural snapshot that influenced the tuning scene of the Noughties more than any other, it’s The Fast and the Furious. This movie came out in 2001, and immediately captured the hearts of a modding generation. Yes, it was largely absurd in quite a lot of its details (who has time to check a laptop that’s flashing ‘DANGER TO MANIFOLD’ while they’re street-racing? Why would your passenger floor fall out just because you’re driving really fast? Why didn’t that Jetta have any front calipers? Why does that guy at the party keep inexpertly strumming his guitar without anyone tearing it out of his hands and smacking him with it?), but its influence was clear: suddenly all the cool kids wanted Skylines, S2000s, RX-7s, and anything else Japanese that they could get their hands on.

Cue a rush to slather everything in full-length Manga graphics – yes, even Vectras and Mondeos. Cars got painted bright orange, fitted with colossal aluminium spoilers, and bathed in a lurid glow of underbody neon. Everyone wanted to be Dom Toretto or Brian O’Conner. The Noughties refracted the excess of the Nineties through a Hollywood filter, and we all luxuriated in the warming majesty of it all. Great times. 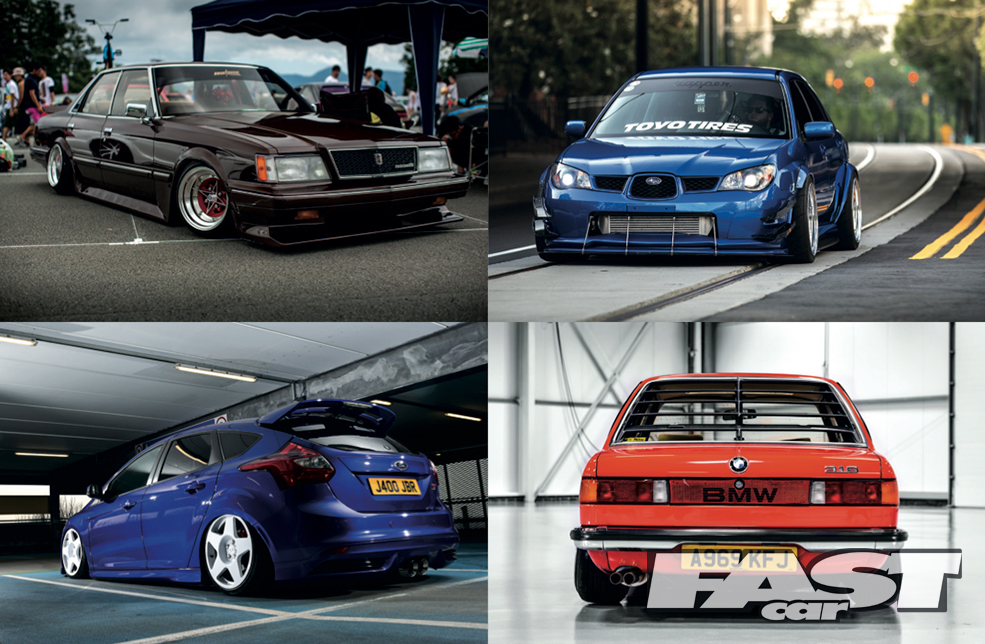 2010s
Want to know about the tuning scene in the Teenies? Look around you. We’re fundamentally split into three distinct camps: the first is the stance scene – employing up-to-the-minute tech to get cars sitting millimetrically precisely, be it with air-ride, coilovers or hydraulics. This height adjustment is complemented by a sort of rolling stock arms race, as everyone tries to outgun each other with the rarest wheels, the most extreme fitment, constant chopping and changing. And, of course, a premium interior goes without saying.

The second camp rails against this almost 1990s-esque extremity by taking a more Belgian approach – OEM+, clean as a whistle, exclusively period-appropriate mods. Retro values take precedence, and ‘better-than- new’ is the watchword.

The third camp is all about obscene horsepower; technological advances and a blossoming aftermarket mean that building a hatchback or family saloon with supercar- baiting power has never been easier.

…and that’s just three of many, obviously. There’s VIP, rat-look, bosozoku, murdered- out, supercamber, donks, zokusha, widebodies, grid-look, you name it. The key element today that differentiates the scene from all the preceding decades is the immediacy of it: social media fuels the one-upmanship like never before. It’s no longer the case that you’d have to wait for Wheels Day to see what everyone had been working on over the winter, or that you had to wait for Fast Car to come out to check out the latest trends – Instagram, Facebook and Twitter let you see it all in real time. By the time something’s registered as new, it’s already played out.

And what will the rest of the decade hold? Well, you’ll just have to keep reading Fast Car to see, won’t you? Don’t worry, we’ll be right at the bleeding edge. We have been since the late Eighties.