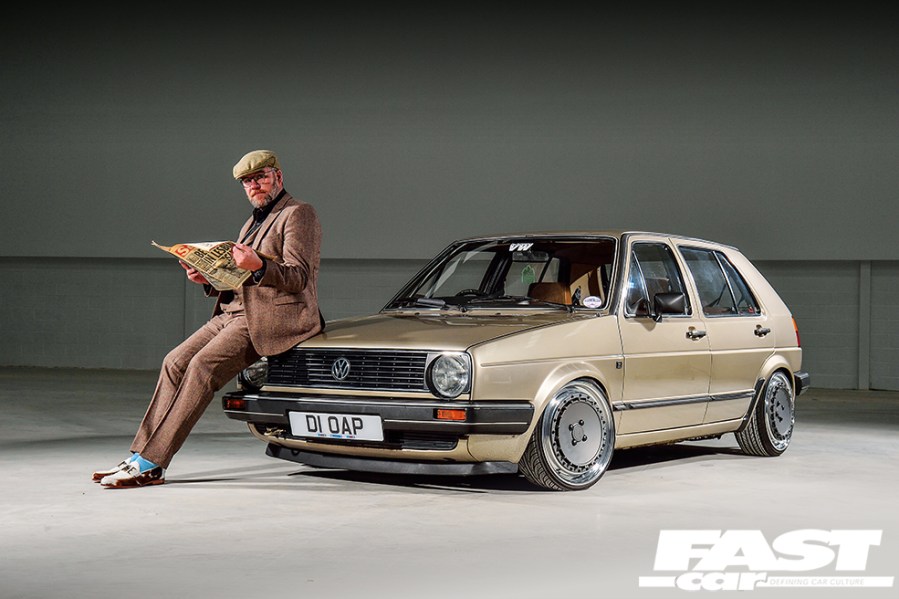 Most sensible folk are hanging up their modded car gloves as they hit their mid-forties. Jay McToldridge, on the other hand, appears to be growing old disgracefully in this tuned 300bhp granddad-spec more-door Mk2 Golf. It’s proper naughty, like…

Co-founder of the hugely-popular Players events and European General Manager of Wheel Pros (the company that owns Rotiform, Fuel, Kinesis, TSW and many more), Jay McToldridge is a self-confessed car junkie, but while he loves motors of all makes and models (his current fleet includes a 964 on ITBs, track-ready AE86 and a 550bhp G Wagon to name just a few), he has always had a soft spot for his water-cooled VWs.

Regular readers may well remember Jay’s previous more-door Mk2 Golf from way back in PVW 2/12, for not only was the car pretty stunning visually, like a lot of Jay’s builds, it was also more than a little bit controversial. “People lost their shit over the zero lip wheels and ridiculous stance… I mean, the purists were really angry about it,” he told us with great pleasure. 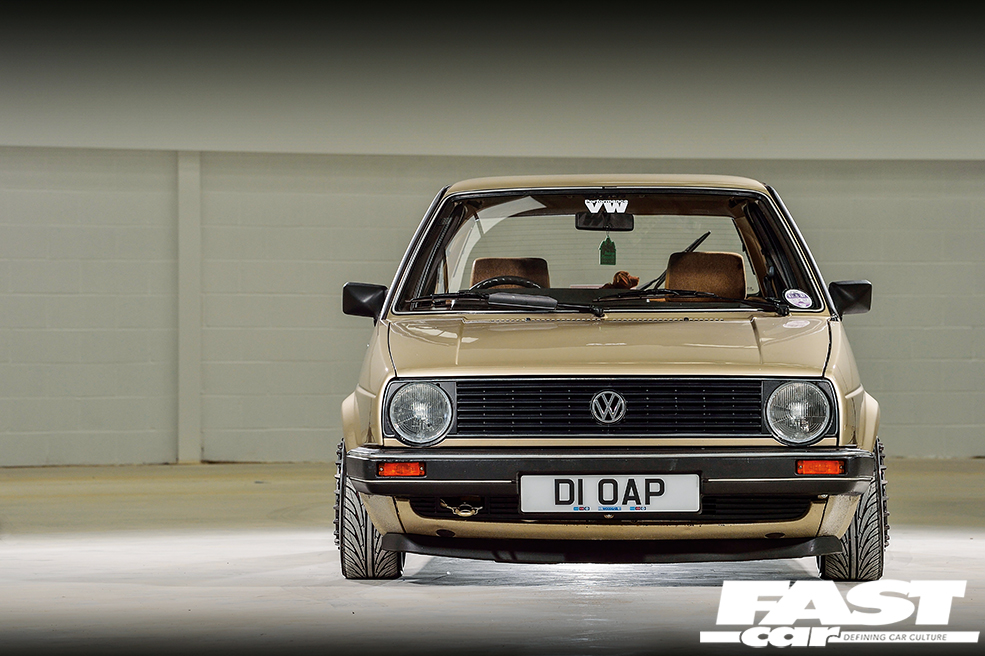 Jay’s the first to admit that while that car was nice to look at, underneath it needed a lot of work to make it a complete. “It was basically a £500 shitter that we cleaned up, smoothed the bay on and made look nice. It was cool and all, but worlds apart from the car you see here today. Plus, this one is a proper Typ19 car where as the other car was a later model made to look old.”

And anybody referring to this car as gold need to think again, too. Jay is quick to point out that it’s actually Polar Silver, which was the shade used on the earlier Typ 19 models. Later cars (like Jay’s previous car) were finished in Champagne silver. Well, that’s enough of anorak stuff. Moving on… 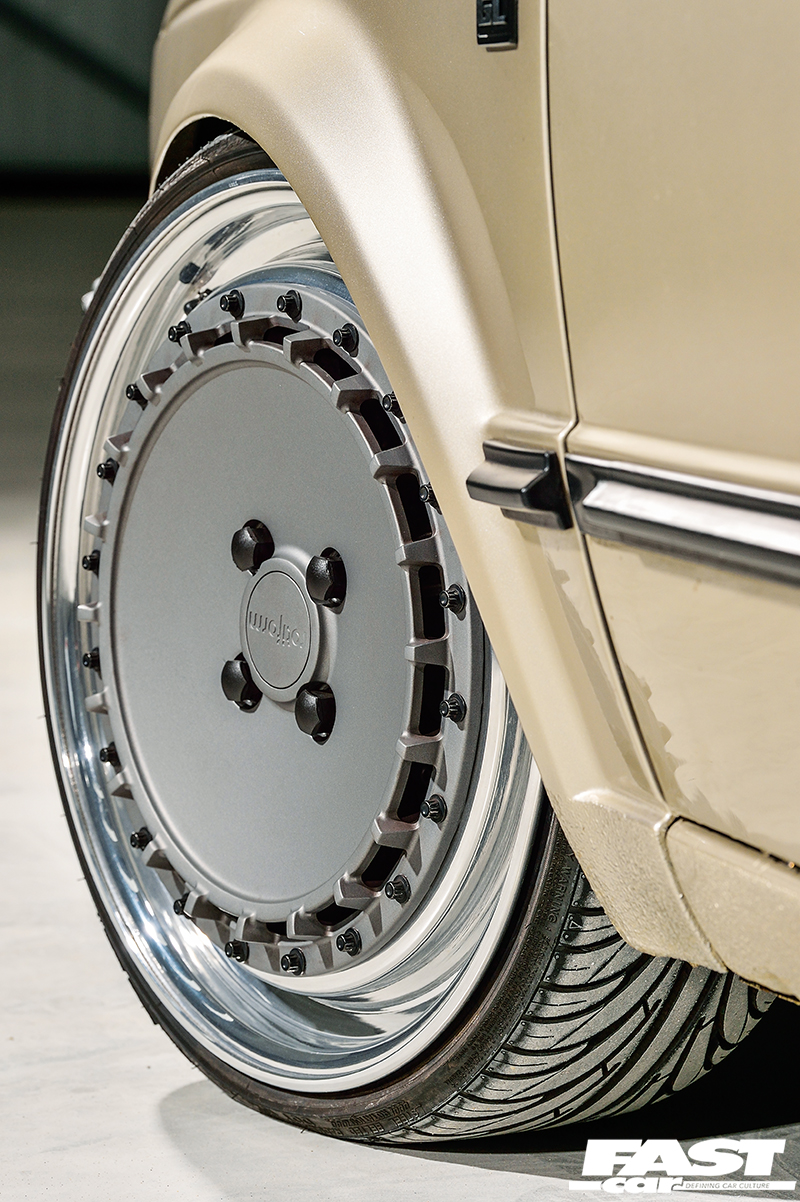 Jay is actually only this car’s fifth owner and it’s had two pretty well-known previous owners who both retained its original 8v motor and just enjoyed it as a cool cruiser. The car itself is super low mileage with around 75k on the clock, is very straight and honest with a very slight bit of patina on some panels. It was basically the perfect base for what Jay had in mind. Well, sort of…

“I ruined both front arches on it straight away and so then just put it in my workshop (aka Tinker Towers) and left it there for a while. It was just nice to look at, but it sort of reminded me of the my last Mk2 and that’s exactly what I didn’t want,” he told us. “I knew I needed to put an engine in it as ideally I wanted the car to be clean and usable but, most importantly, silly fast!” Oh dear… 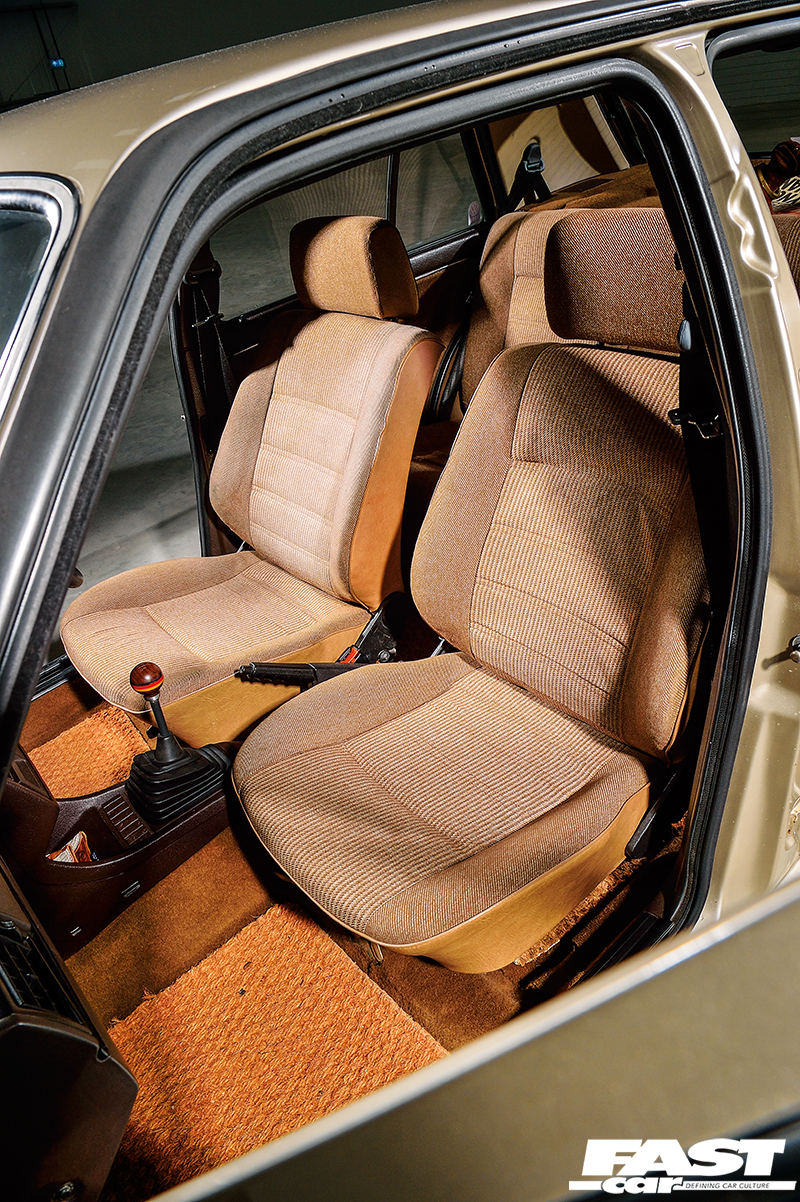 It was about this time that Jay started talking with Jamie Packham at J Tech about possible engine swap solutions. A bit like Jay, Jamie should really need no introduction as we’re featured a number of high-quality, high-profile builds in the pages that have been painstakingly created at the hands of Jamie and his expert team.

Inevitably, when Jay and Jamie put their heads together the creative juices soon began to flow but while both guys are partial to a crazy idea (or ten – all), Jamie does have a slightly more sensible side, too. Ultimately, he knows what these cars are like to live with on a daily basis, so while Jay had his heart set on a rip-snorting Berg-Cup style engine (haven’t we been here before, Jay? – Ed), Jamie did his best to convince him otherwise: “I went to Jamie and said, I want you to build me a two-litre 16v on throttle bodies, and I want it to sound like a Berg Cup car. I’m obsessed with Berg Cup, as you know.” Quite a simple brief, admittedly, but knowing Jay wanted to use the car on a regular basis, with possibly some trips to shows in mainland Europe, Jamie had what he thought was a slightly more sensible option in mind. If, that is, you can call a 300bhp ‘built’ 1.8T motor sensible! 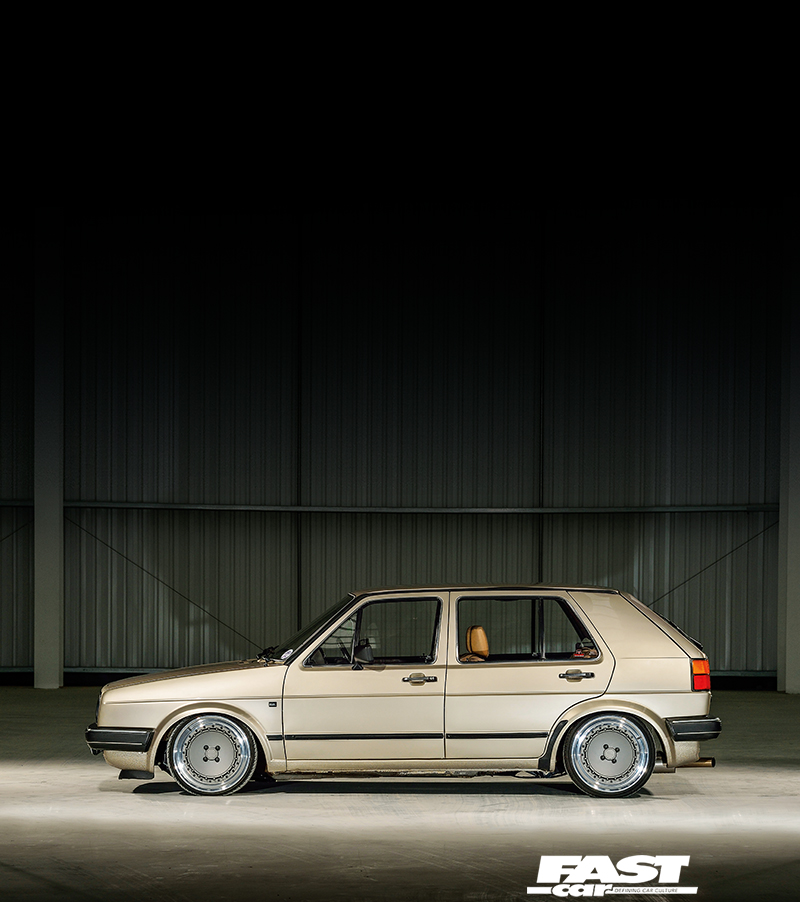 “I seem to remember Jamie saying he was more than happy to build me a 16v on ITBs, but he pointed out it would cost a shit load of money and it would also be shit to drive on a daily basis!,” Jay confessed. I guess he had a very good point.

Once the 1.8T engine was finally decided upon, Jamie and Jay decided it made sense to fully forge the internals, so it would stand the test of time and take any abuse Jay would throw at it. “Jamie then asked how I wanted it to look in the bay, to which I said, I don’t want it smoothed, just really clean but as OEM-looking as you can make it.” 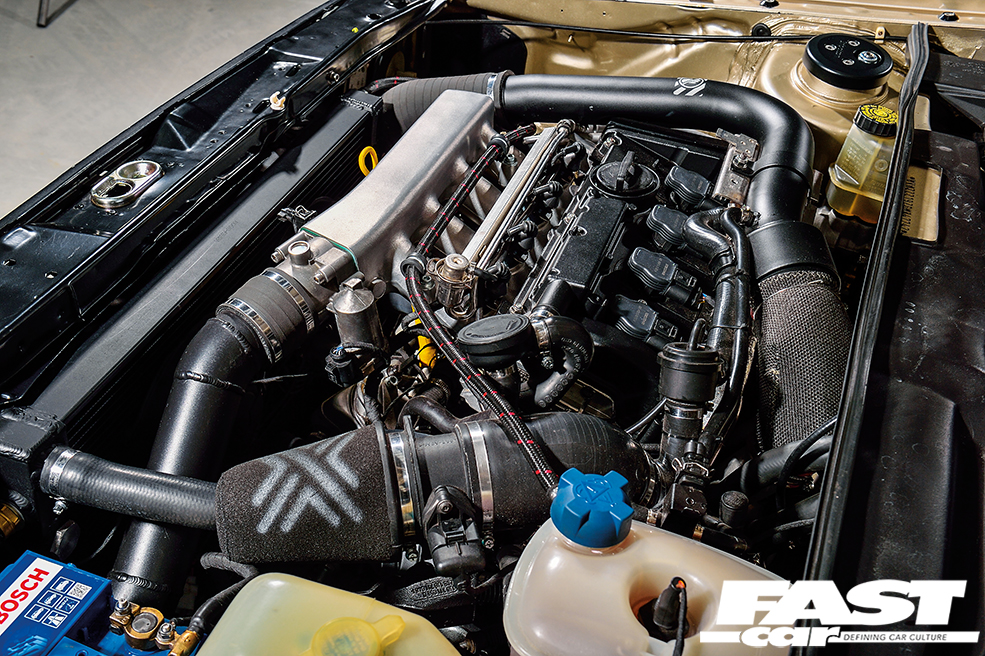 While Jamie had the car, Jay instructed him to replace or powder-coat everything underneath so it was as good as new, but this is when the guys realised the car wasn’t quite as straight as they were led to believe. “Whilst poking about underneath the car it soon became apparent the vehicle had previously been involved in a fairly heavy front-ender and while it hadn’t been badly repaired, if I wanted to properly use the car in anger, then it would make sense to straighten the thing out properly.”

“I can’t believe I’ve been messing with VWs for nearly 30 years and I’ve never 20-valved a car. This is the first one I’ve ever done and I was like, why haven’t I ever done that before?” Jay admits the car did spiral a bit during the build (as did the budget), but unlike the last Mk2, which he sold on pretty quickly because he wasn’t overly happy with the end result, this one was built as a keeper, so it needed to be right.

Long story short, Jamie and the team ended up cutting the front legs off the car and replacing them with those taken from a donor shell they had in the workshop. It was the only way to ensure the car was strong enough to take the extra power without ripping itself apart. It also meant it would be safe.

In terms of engine spec, Jamie used a tried and tested formula centred around a BAM lump, with forged rods and pistons and a hybrid AET K04 turbo strapped to a Trackslag downpipe. The results are 300bhp with minimal lag, plenty of traction (thanks to the Quaife ATB) and more smiles per miles than any other car Jay has owned. 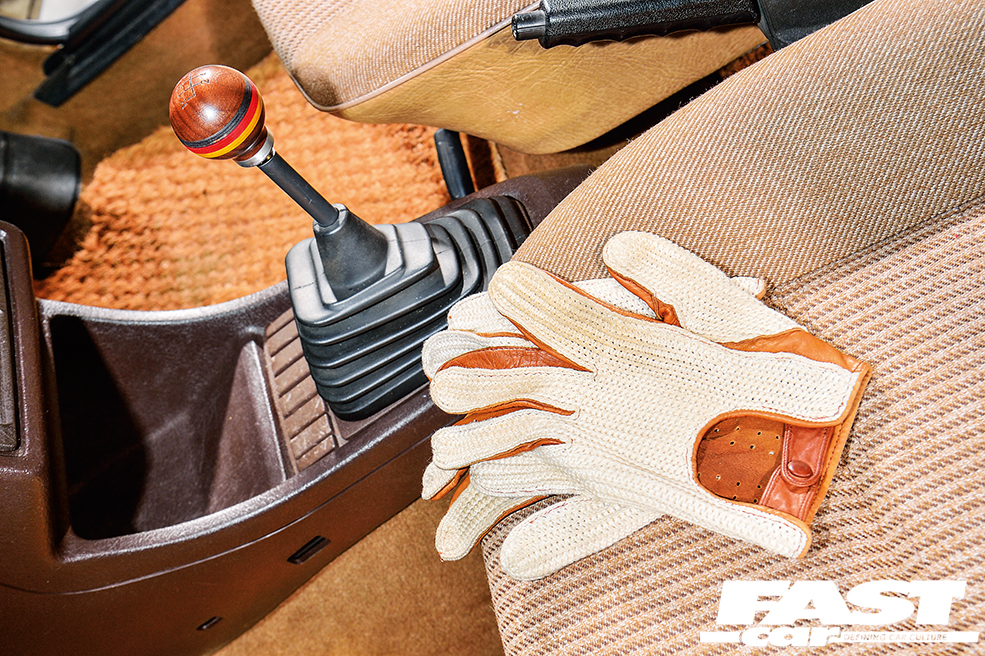 “Jamie gave the car back to me and you know what, it’s just so easy to use, other than the lack of power-steering, which means it can try to kill you in the bends if you come on the power to soon. But generally it’s exactly what I wanted.” While he had the car, Jamie basically went over the whole vehicle to ensure everything was up to scratch, replacing and upgrading as he felt necessary. Despite getting the car back in perfect working order, that has’t stopped Jay from killing two sumps since its return. “Admittedly I have wound the coilovers down quite a bit since getting it back, but since smashing the sumps Jamie has build me what we hope is a bullet proof reinforced item.” Time will tell…

It’s actually so refreshing to see a modified Mk2 that’s not bagged as well. The guys did spend quite some time perfecting the stance, though, to get it sitting right, plus remaining drivable and obviously wheels played a large part in that. Thankfully, Jay and his many contacts know a thing or two about rolling stock. “Initially, we were running fully polished Rotiform STR splits, but Jason [Whipple] over at Rotiform’s US HQ didn’t like the fact the wheel design had five spokes and the car was running four-stud hubs, hence the bolt holes in the wheels didn’t really line up perfectly,” Jay continued. “I’ve always loved Ronal Turbos, like I had on my old Mk1 for a while, so we ended up settling on Rotirom’s IGS, which has a bit of a turbo style to it anyway.” The vital stats that were rolled out ended up being 6.5×17 up front and 7×17” in the rear both sharing an ET of +56. A set of skinny Nankang 185×35 17 NS2-R rubber band tyres finished the look off a treat. 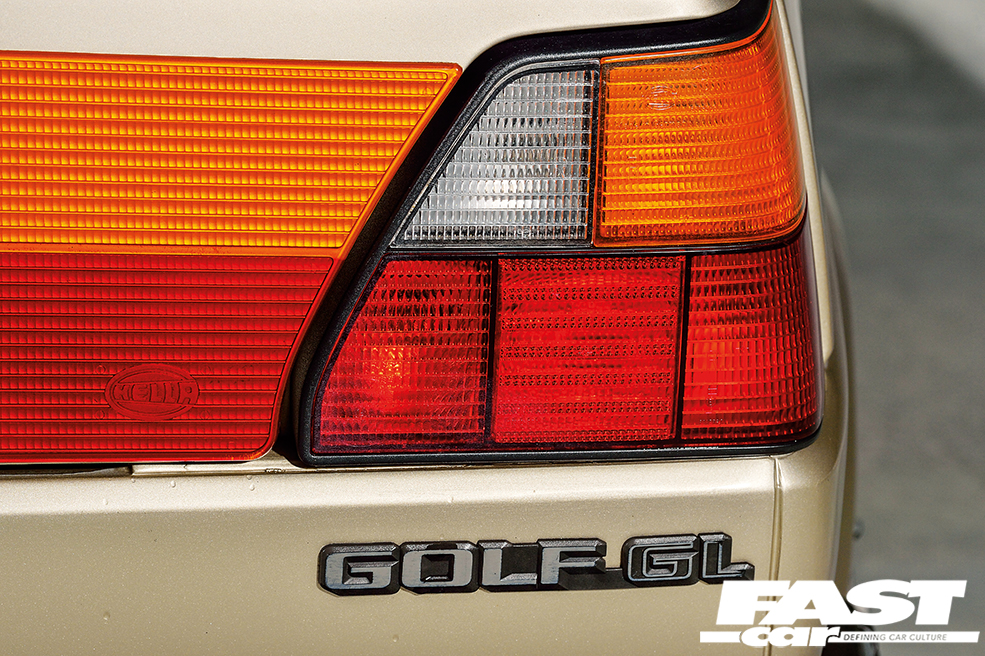 We love externally how the tuned Mk2 Golf remains pretty much bone stock, bar the wheels and that period perfect Heckblende out back. Jay claims there’s still quite a lot of original paint on the car as well, which adds to the appeal.

Inside, things remain pretty stock as well, although the CAE shifter sort of gives the game away that all might not be quite as sleepy as it initially appears. Jay still has the Sun newspaper and Playboy magazine from the same month and year the car was produced, which were handed down to him from the previous owner. The nodding dog on the rear shelf is just a humourous hint at what our friends do out in mainland Europe with their vintage VWs. 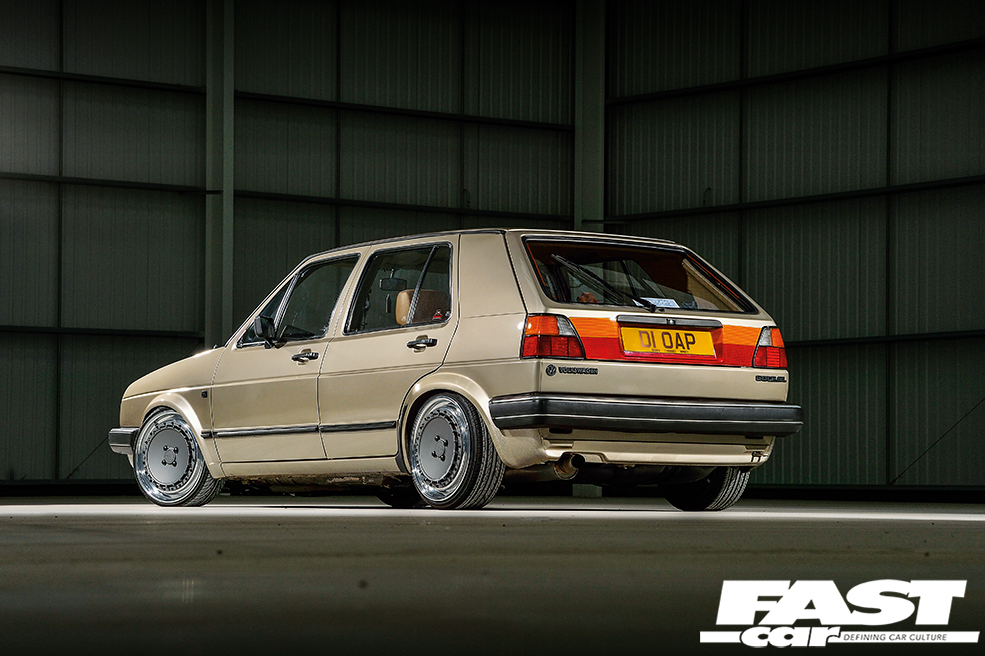 Now the car’s finished, Jay admitted he does use it quite regularly, providing the weather is okay of course. We get the feeling it’s the car he wished his original Mk2 Golf had been back in 2012.  “There’s a funny story, actually. Somebody saw the new car online and commented how I’d copied a recently built R32-powered Polar Silver car. Thankfully that car’s owner replied saying that I’d actually built one of the original Polar Silver examples around 11 years ago!” You’ve got to love the modded VW scene…