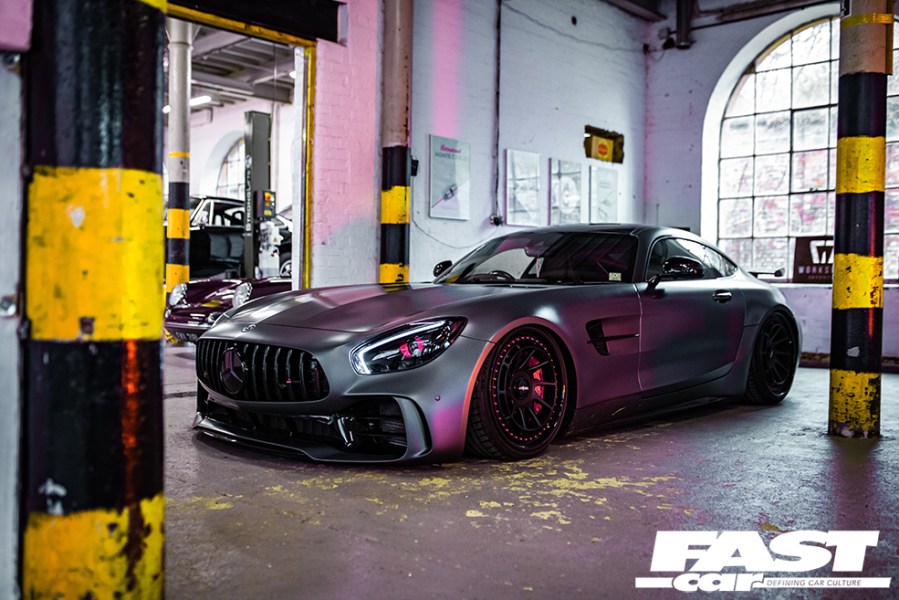 Sleek as a big cat and dark as midnight, this modified Mercedes-AMG GT is a scary-looking thing. But with its cheeky pink accents, does it actually hide a playful side? 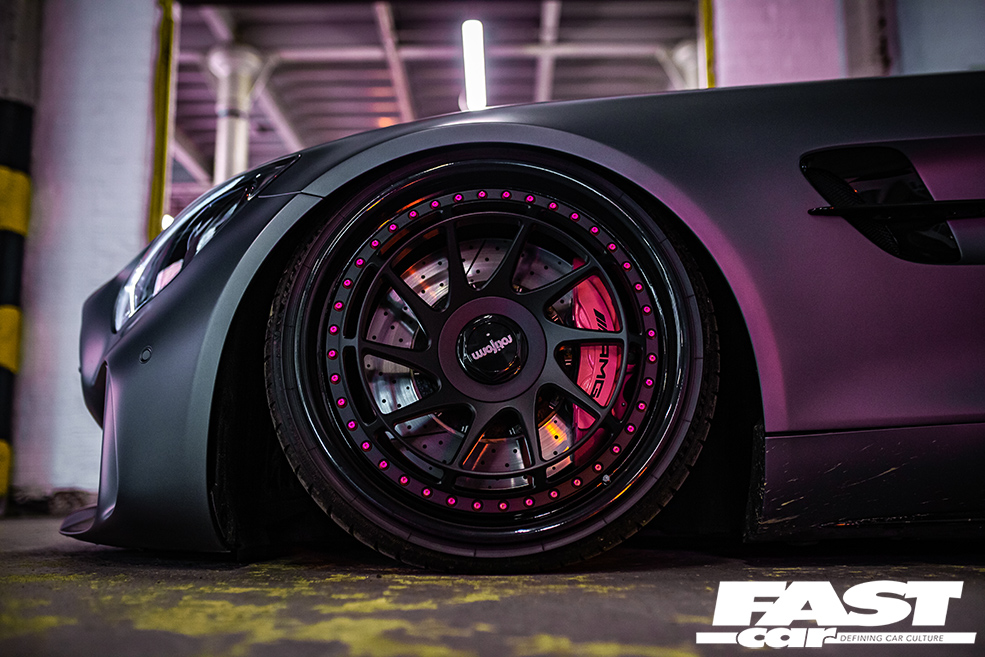 It’s easy to get caught up in the serpentine machinations of the modern Mercedes-Benz model range, particularly when it comes to AMG. See, nowadays they’ll stick an AMG badge on anything and that’s a bit confusing.

Peer back through the swirling mists of time to the age before Mercedes-Benz (or rather, DaimlerChrysler) took a controlling interest in AMG in 1990, and we find that ‘AMG Motorenbau und Entwicklungsgesellschaft mbH’ operated as its own independent entity – an engineering firm specialising in tuning Mercedes-Benz products, although they did dabble in other brands too (AMG Mitsubishi Galant, anyone?). 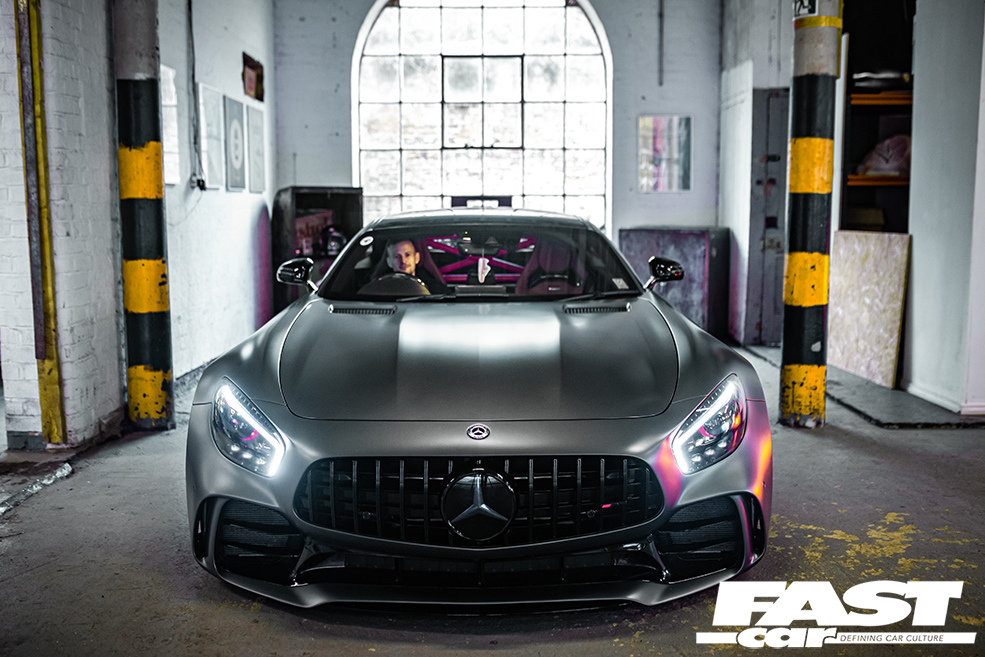 The first commercially available, official AMG Mercedes was the C36 in 1993. So unlike today, when it’s possible to walk into a Merc showroom and choose from a variety of official AMG variants, it was more the case back then that such a model was a bespoke affair, looked on kindly by M-B but by no means officially sanctioned. Today, AMG Mercs are still special. But the fact everyone with an A160 or a C180 glues an eBay-bought badge on the back kind of dilutes the effect.

Perhaps it needs to be reiterated, then, that the Mercedes-AMG GT is a very special car indeed. Forget your badge snobbery and the Instagrammers’ assertions that the race-derived GT R is the only one worth having, the GT is an astounding machine in its own right. 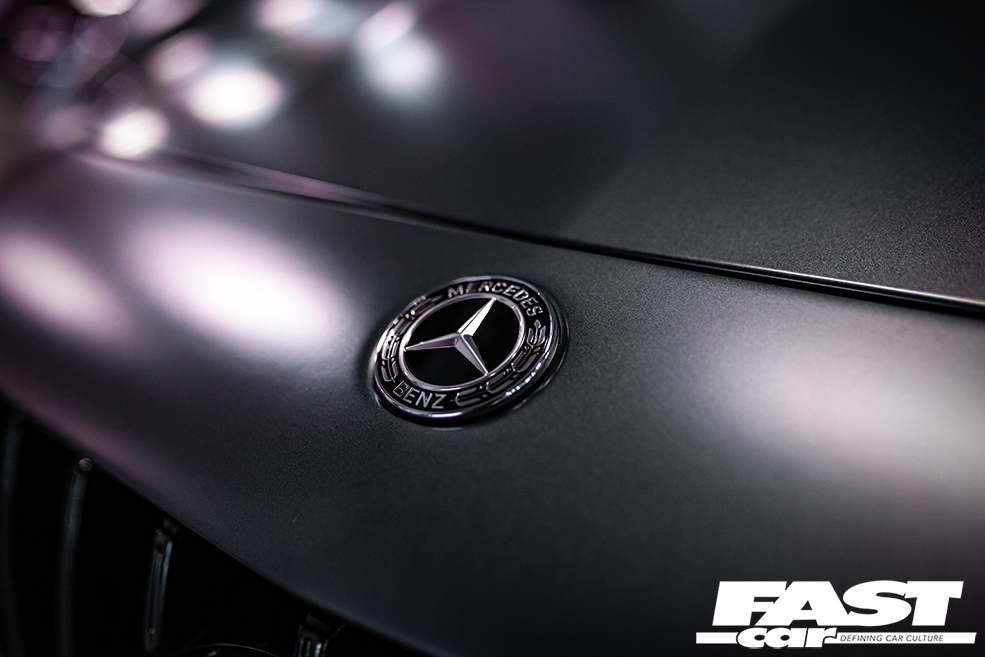 Just look at it: it’s got gorgeous uber-coupe proportions, a genuine supercar profile and under the bonnet there’s a brawny 4.0-litre twin-turbo V8, mated to the revered 7-speed AMG SpeedShift DCT to create some pretty juicy numbers. Even in base model spec the engine kicks out 469bhp, with a 0-62mph time of sub-four-seconds. The chassis is an aluminium spaceframe, with forged aluminium wishbones and brakes big enough to alter the trajectory of the planet itself, while the super-lightweight body is made from aluminium and magnesium. Lewis Hamilton helped with the car’s handling development. This is no badge-engineered C-Class. The Mercedes-AMG GT is the real deal.

Naturally, we’re not just bringing you a shoot of a bone-stock GT and discussing the merits of its engineering prowess. This isn’t Auto Express. No, as you can see, this one’s a little more special than most. It’s been tinkered with: a tickle from the slam fairy here, a blessing from the wheel gods there – turning it into something otherworldly and strange. 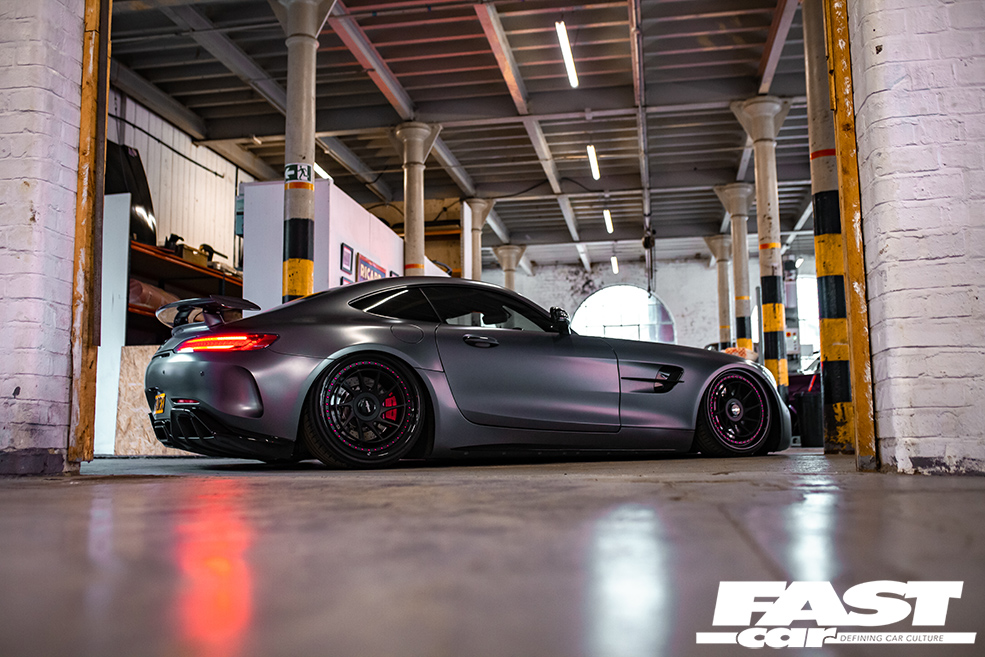 The man behind it all is Andrew Britton, so perhaps we shouldn’t be all that surprised, given he’s a guy with supernatural abilities to take high-end sports cars and turn them into full-on show-stoppers. Regular readers may remember his Liberty Walk BMW M4 which we featured a couple of years back. And he’s been a busy boy ever since (as his @caffeineiscool Insta feed keenly demonstrates).

So why a GT this time? “Well, I’d always wanted a GT R,” he shrugs, with his trademark impish grin. “This isn’t one, it’s a GT C, but it was cheaper than other examples from the same year, so I bit the seller’s hand off.” 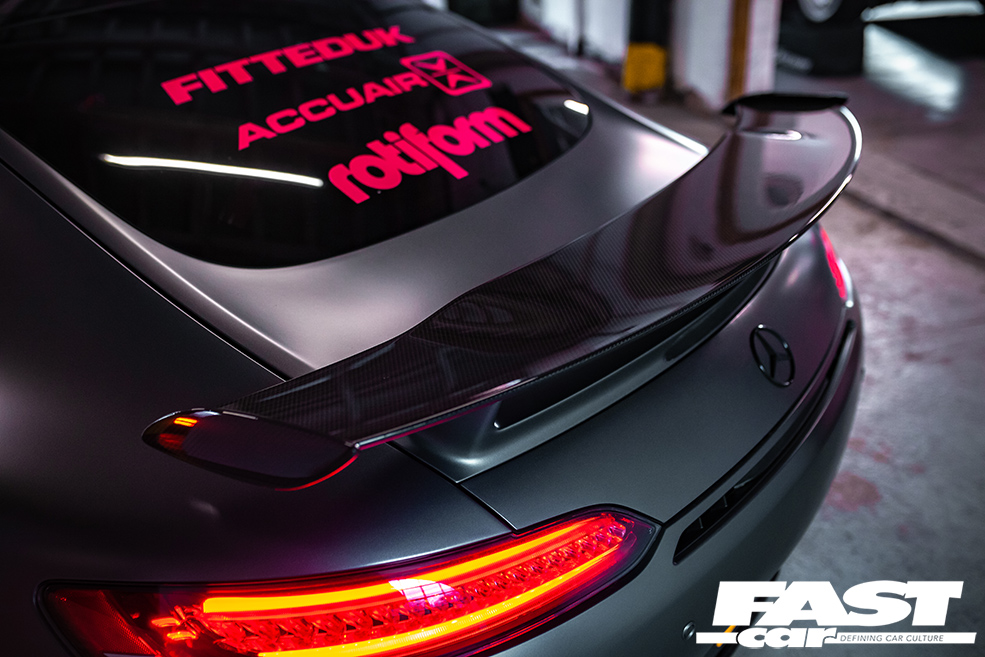 The GT C is, of course, by no means a compromise. It builds on the performance upgrades of the GT S (more power, electronic LSD, Race Mode) and adds active rear-steer and a wider body, as well as yet more power – we’re talking 557bhp, which is a ludicrous number.

Much like when he got the M4, the GT C was totally stock when he bought it, and in the same way that the BMW quickly received a full body makeover, so the same fate was destined for the bruiser Merc. “I had the whole car changed, as I love the aggressiveness of a GT R,” reasons Andrew, and you can’t fault the logic. So now the car wears the full body addenda from the bigger-brother GT R: the front bumper, sideskirts, front wings, diffuser and rear spoiler, and it’s taken the inherent aesthetic meatiness to the next level. 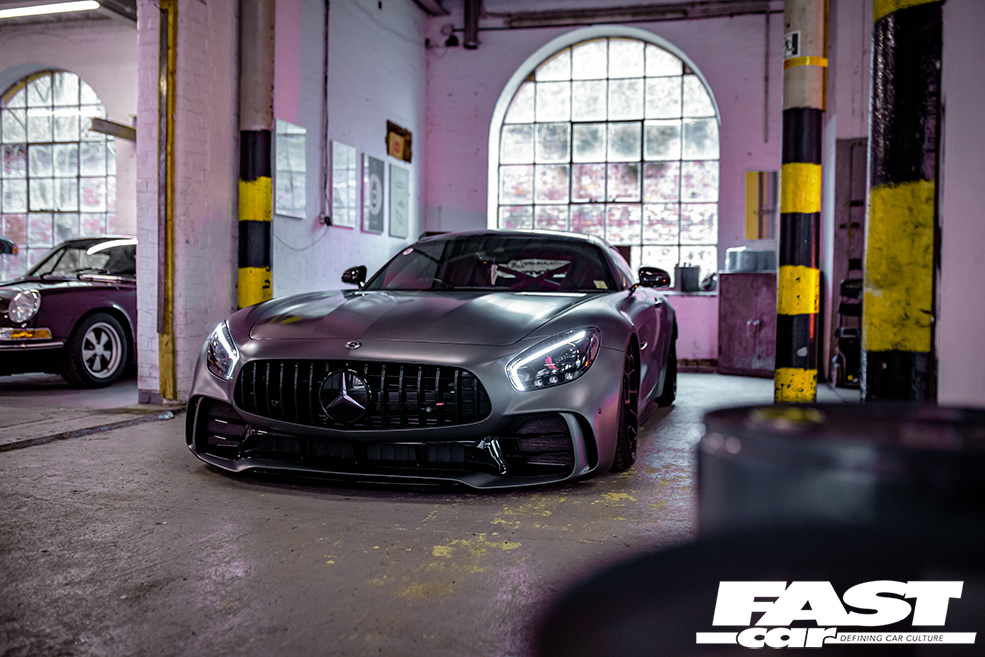 But this is only the first chapter of the tale. For the next, we need to refocus our attentions on Colourkraft – the Wellingborough-based body supremos. This is a massive name on the UK modding scene today, renowned for their high-quality work as well as being a safe pair of hands. The everyday business lies in traditional bodywork, paintwork and insurance repair jobs, but founder David Loraine and his team have always striven for a level of absolute perfection and fastidiousness which has allowed them to branch out into custom work. If you’ve been to a car show in the UK recently you’ll almost certainly have seen something these guys have put together, from the bagged satin green Lamborghini Aventador to Europe’s first Liberty Walk Toyota GT86. Basically, if you want to drop jaws on the showground, they’re good guys to call.

“I got Colourkraft to do all the work on this car, as I’d used them before. They rebuilt the M4 after some wally crashed into the back of it while on my way to Keep It Clean in Scotland,” says Andrew. “When I got this car I swore I wouldn’t modify it, but about five days in I saw a GT R front end and I knew what I had to do! So I bought the front bumper, wing and diffuser, and about two weeks before Ultimate Dubs I sent it to Colourkraft to be done. The deadline was so tight, and two days before it had to be ready it turned out that the front wings of a GT C are 2cm smaller than a GT R – and size matters! So then I had to fork out more money to get the front wings. It actually would have been cheaper at this point to buy a GT R.” 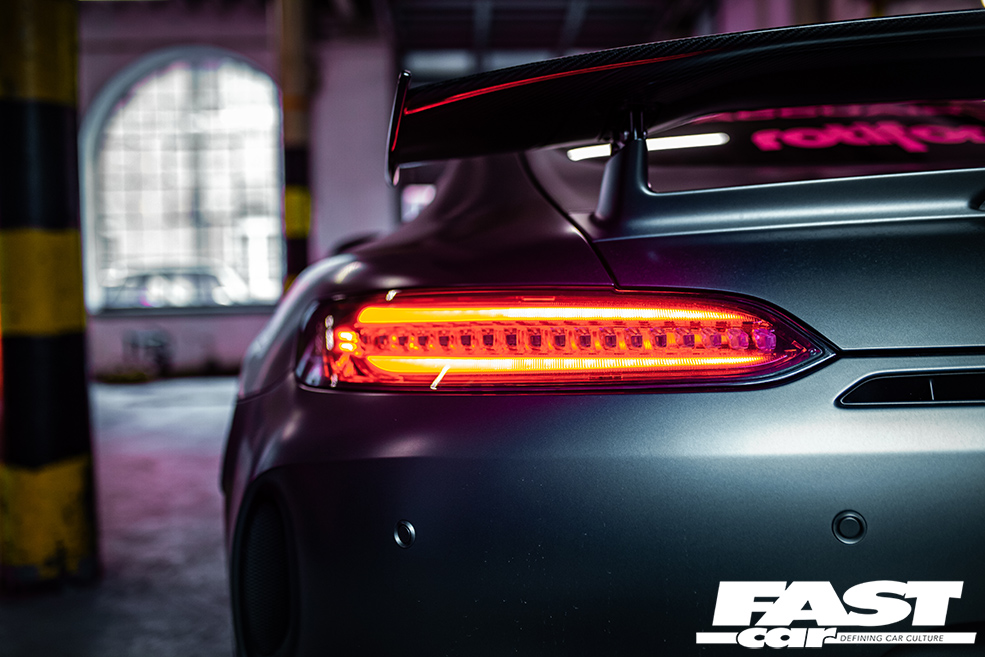 That may well be the case, but the point is that anyone with the means to do so can walk into a dealership, slap a fat wad of notes on the counter and walk out with the keys to a GT R. What’s being created here is art, a one-off custom, something that absolutely nobody else has. So yes, it costs a fortune to achieve these results. But you do get what you pay for.

While the car was at Colourkraft, they also fitted an air-ride setup, which thankfully proved to be not too much of a ball-ache despite the bespoke nature of it. The big coupe’s now running custom AirREX struts with AccuAir e-Level management, sitting pretty over a set of staggered wheels – and when we say ‘staggered’, we’re talking diameter. The GT C came from the factory with 19-inch wheels at the front and 20 inches at the rear, and Andrew’s continued this theme with his one-off Rotiform OZT rims, measuring 20 inches at the front and 21 inches out back. 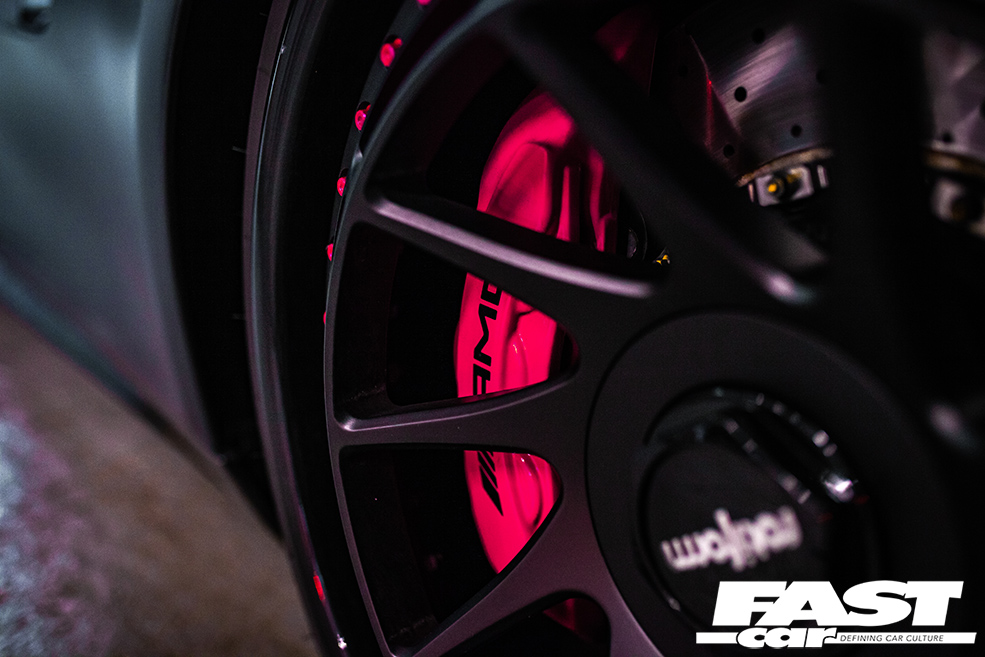 The true master stroke here is the jarring optical embellishment: you see, this is a spectacularly mean-looking car design, it looks like it’d have your leg off if you looked at it funny, so what’s the most amusing way to counteract that? Pink stuff, of course.

The wheels’ hardware is all bright pink, and so are the colossal brake callipers, as well as the rollcage. Even the headlights have unique pink accents. “Those details really draw people in,” Andrew smiles. “Some love it, some hate it – but hey, it’s my car!” 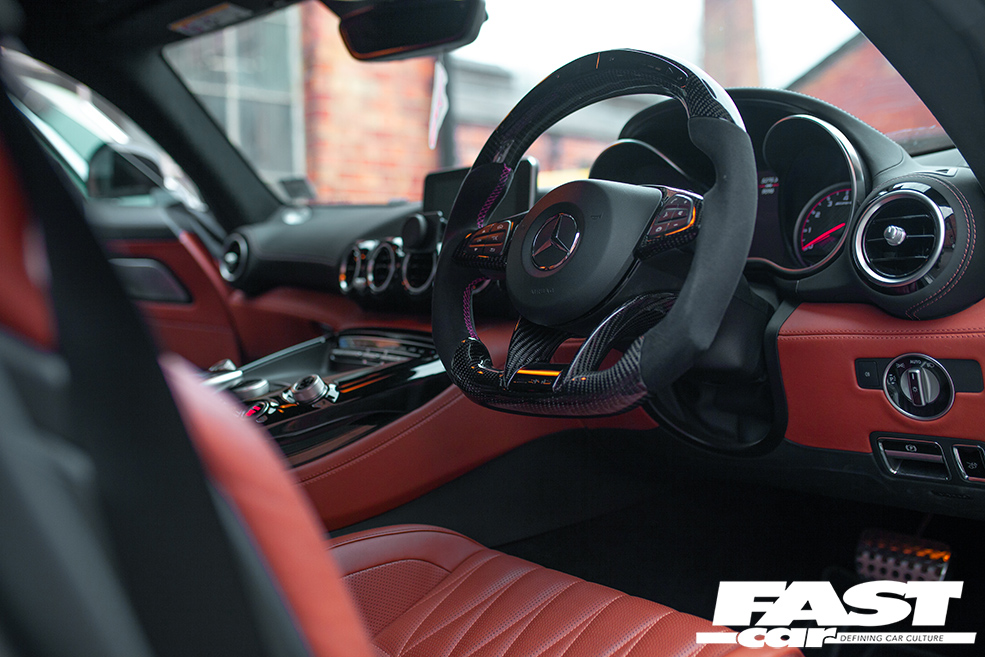 Damn straight. Your ride, your rules. That’s always been the way and we applaud the commitment. Besides, the vast majority of onlookers seem to absolutely love the Merc, and rightly so. From FittedUK to the Players Classic and even down to Wörthersee, it’s been winning hearts and minds all over.

It’s a dream come true for Andrew, given that he’d always fancied a GT R, and he’s gone to extraordinary lengths to create something that’s even better. So obviously he’s now gone and sold it and bought himself a Lamborghini Huracán. What more would you expect, eh? 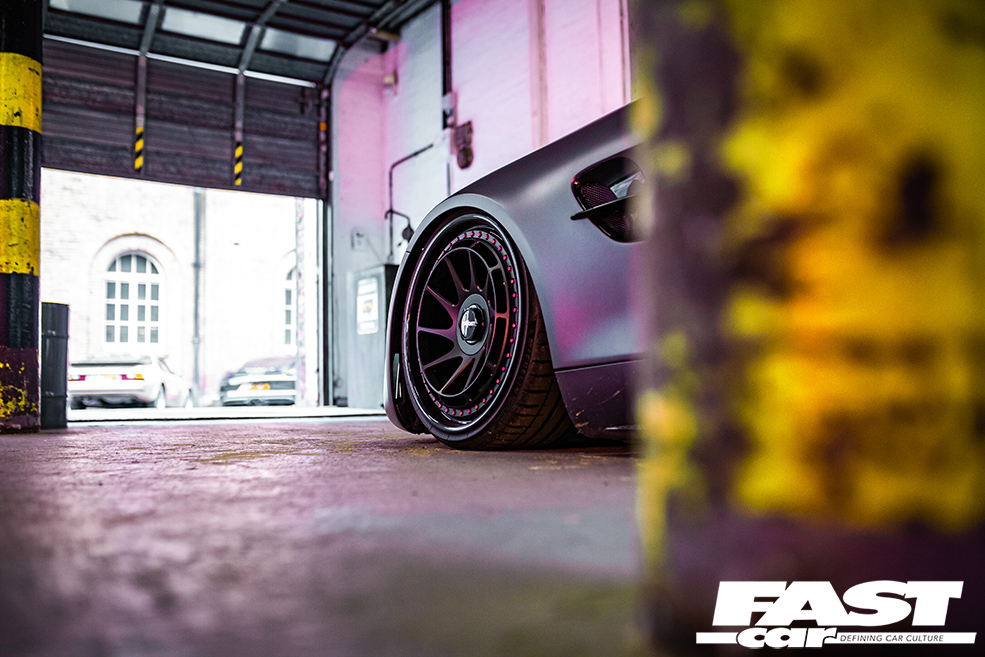 He’s proven the prowess of the modern AMG brand, and now he’s off to Sant’Agata. Some people just can’t sit still.