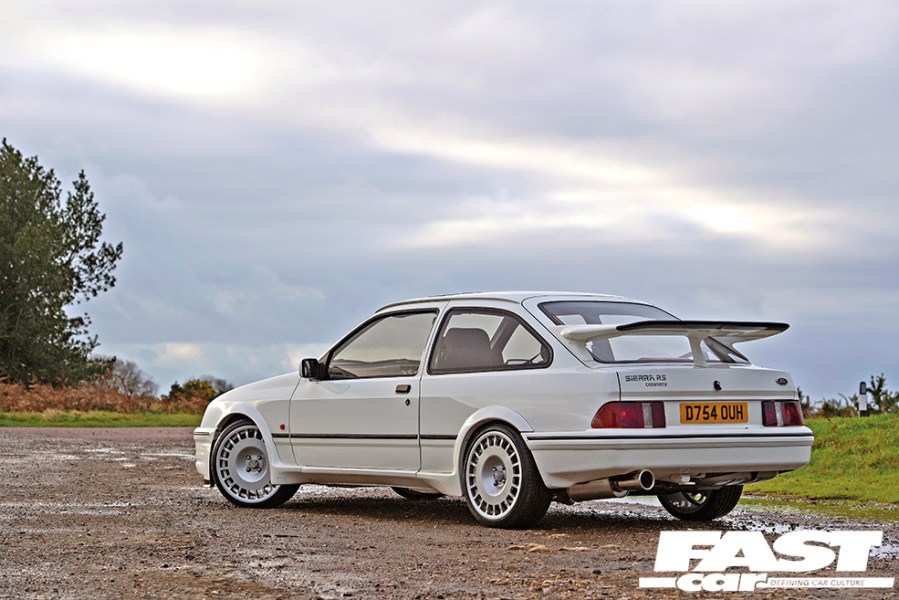 Russ Wheatland learned to thrash Fords when he was a kid. Soon he’ll use this 500bhp Sierra RS Cosworth to teach his own offspring a few lessons.

It’s so often the case with enthusiasts that our first driving experiences go on to influence our car ownership forever onwards. And it was certainly the deal for Russ Wheatland, who’s been pulling donuts and shredding tyres since primary school.

He says, “After learning how to drive tractors sitting on my dad’s lap, I drove my first car aged eight. It was mum’s old Mk4 Cortina, which was about to go to the scrappy; the old man sat me in it in the middle of the field out the back of our house, and said ‘work it out but don’t floor it’. I could hardly see over the steering wheel or touch the pedals, but within 20 seconds it was going round and round, spinning the back wheels.”

So it was a Ford adventure from day one, although when Russ reached legal driving age, he did what so many 17-year-olds do for financial reasons, and made do with an old Micra. That was quickly booted out for a Vauxhall Nova, which was the platform that helped Russ learn about tuning and modding – a 2.0-litre red-top Nova was followed by a Westfield running a similar engine. 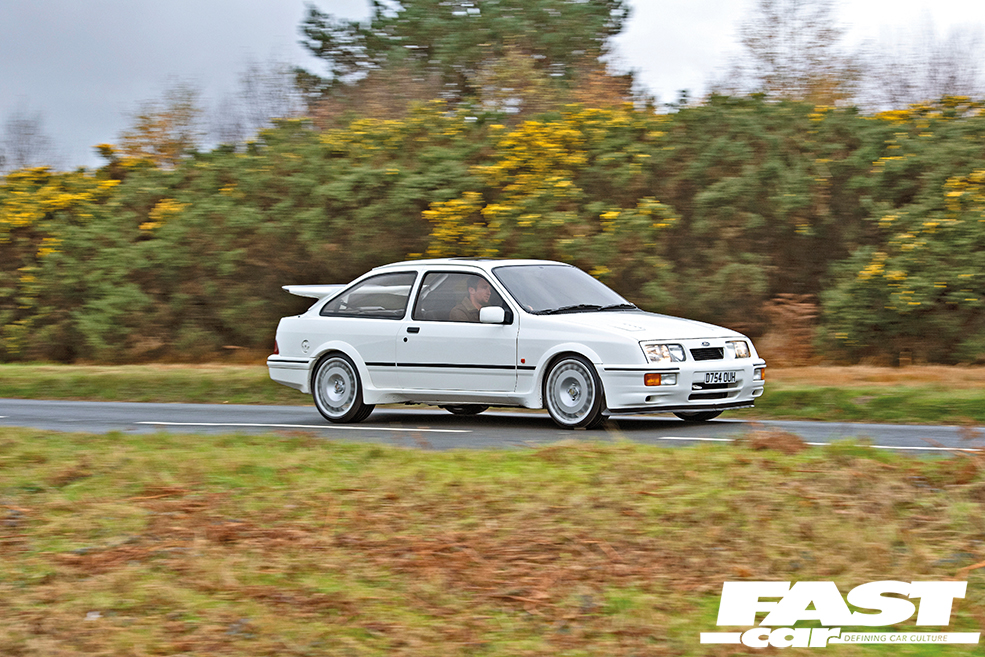 And it’s well documented that Cosworth had a hand in the Vauxhall red-top engine, so the next logical step was surely scribed by fate. Those fledgling adventures donutting Fords still swam in his affections, so Russ did the right thing and bought a rear-wheel-drive Sapphire Cossie.

The memory raises a smile: “Every time I drove that car I had a grin from ear to ear. I’d never owned anything with that kind of power, and instantly fell in love with it. It was Mercury Grey, running about 380bhp, and at the time was the best car I’d ever owned. Unfortunately, I couldn’t afford to maintain it; when the time came to buy a house and settle down, I reluctantly had to sell it.” 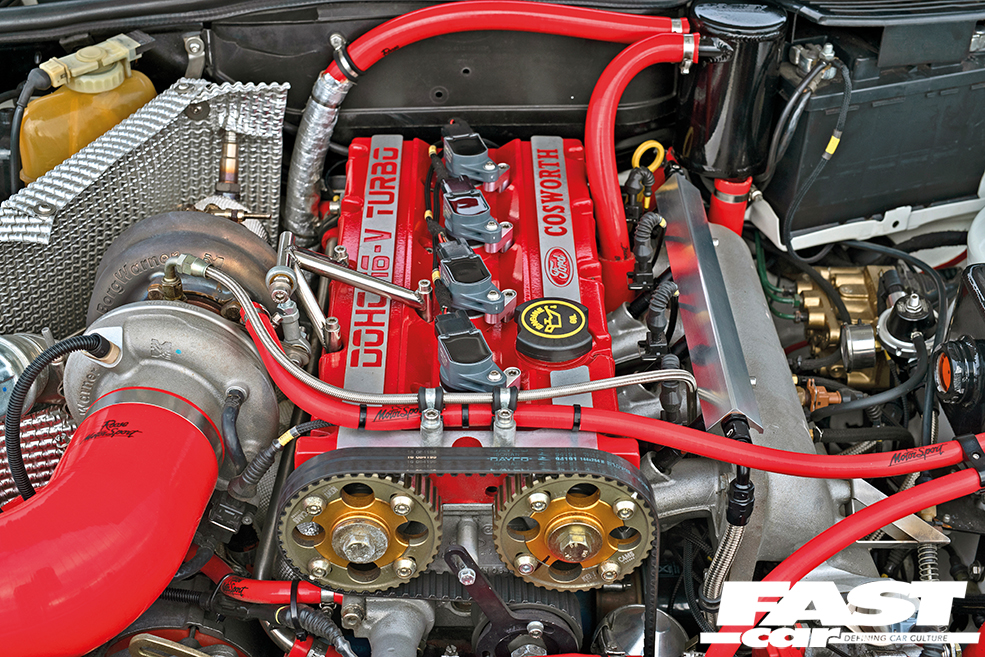 Buying a track-modified Peugeot 205 GTi to at least keep his hand in, Russ found life increasingly getting in the way. With work commitments ramping up, a new house and an upcoming wedding, he seemingly didn’t have time for cars. And yet there was something missing. Something elemental, something vital.

“I just couldn’t stop thinking about my old Cosworth,” he laments. “The power, the noise, the drive, everything. I knew I had to get another one, and would want to use it on our wedding day. I looked into finding a three-door, and after getting the nod from the other half, the hunt was on.”

Russ searched high and low for months, before the car you see here popped up on eBay in early 2017. Everything about it ticked the right boxes – the spec, the condition, the story behind it. It was all very intriguing, and it only took the first split-second of the viewing to convince Russ that it was the Cossie for him. 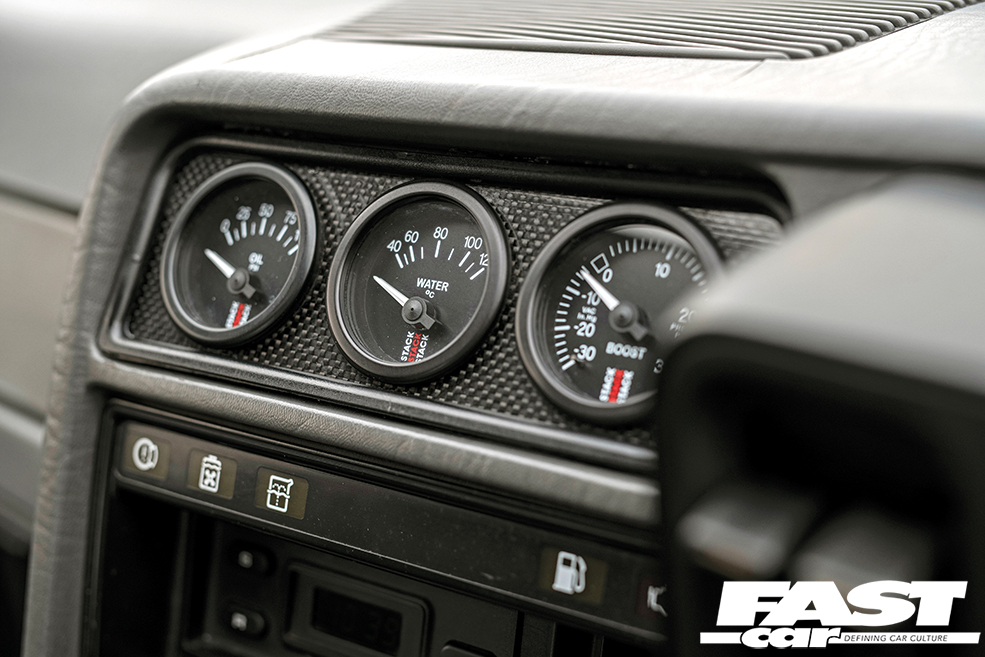 Now, regular readers of Fast Ford may recall a white three-door Sierra RS Cosworth that was featured in that magazine in 2017; owned by Harry Hain and wearing the registration number SKY 702, it had been rescued from dereliction in Spain, having sat abandoned in a field for ten years, and given an incredible nut-and-bolt restoration over the course of four years. It also had a very high-spec engine built by Harvey Gibbs, putting out in excess of 500bhp. Well, that car is this car. Russ wasn’t just buying a three-door, he was buying one of the most beautifully restored Sierras we’ve ever featured.

He recalls, “A deal was done, and a week later it was home. We took it out a few times, and then used it on our wedding, which was unreal, and I don’t think I could ever part with it for that very reason.” 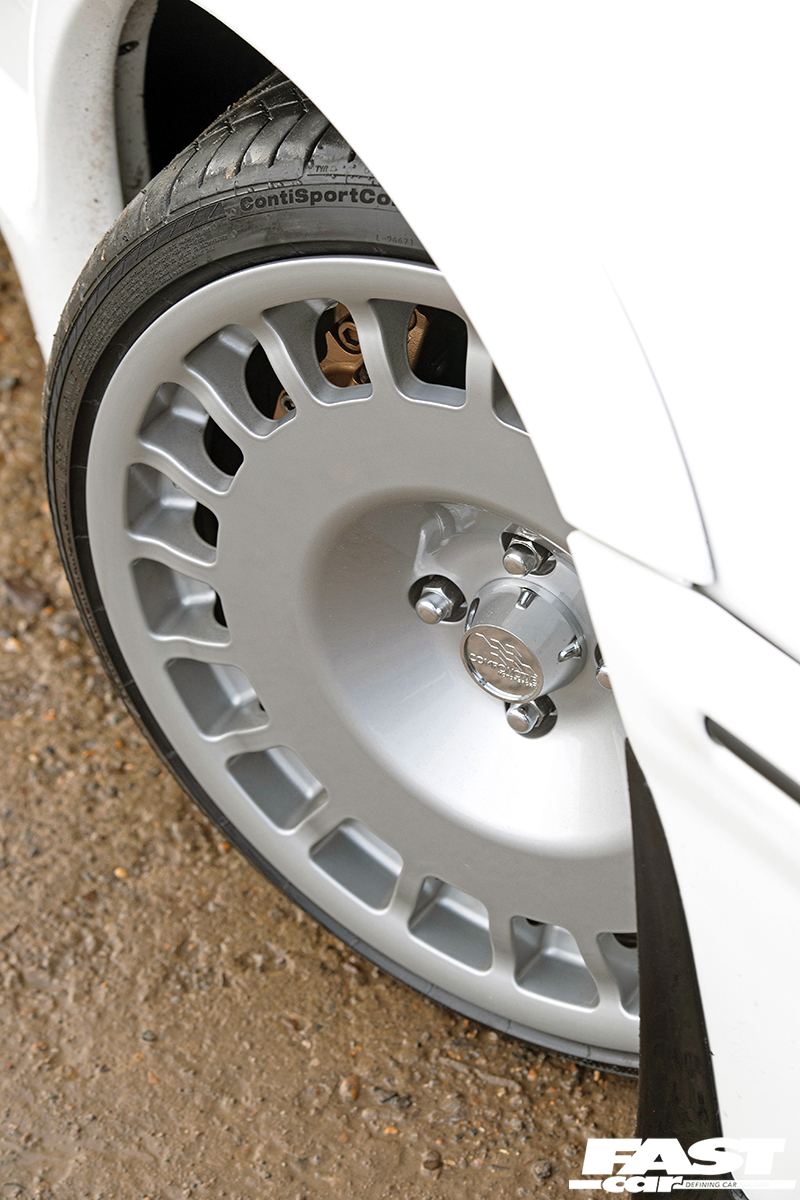 The 500bhp Sierra RS Cosworth was magnificent on every conceivable level, but Russ has never been one to buy a car and leave it alone. He had plans, and itchy fingers.

“I knew there was still lots that could be done, and I haven’t stopped improving and upgrading things since I’ve owned it,” he says.

Job one was to change the wheels for the timeless choice of oversize Compomotive THs. Then the mechanical and integral upgrades began in earnest. The big thing that Russ was really keen to achieve was to take that extraordinarily high-spec engine and modernise it with 21st-century management.

“My setup of choice was the Link Fury ECU,” he says. “I love taking an old engine and applying new technology to it to make it not only more powerful, but also run better and more safely. It really does run great, and I can drive it like an everyday car when I want to.”

Russ has also fitted a Quaife diff, and gone to incredible lengths to source new-old-stock parts to perfect the interior.

He explains, “I’ve basically had everything apart on the car to make these improvements and upgrades. The only thing I haven’t had to touch is the engine, which is probably the quietest Cossie motor I’ve ever heard. 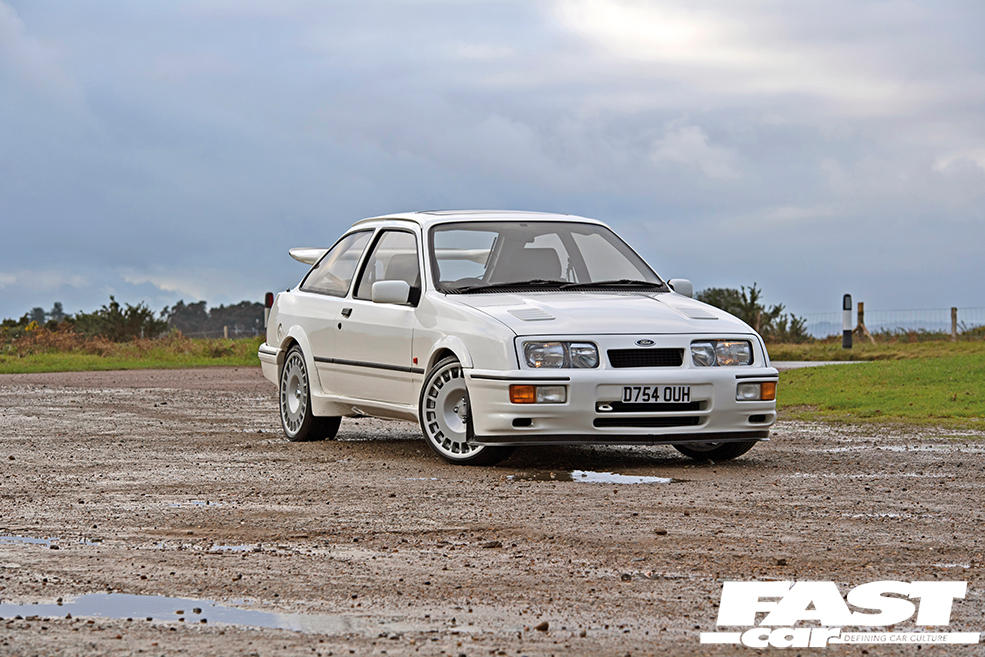 “Thanks to the incredible restoration, the underneath is as clean as the top, as everything is painted, and all nuts, bolts and fixings are either painted or zinc-plated.”

The car was very much built to last when Harry worked his magic on it, and it’s once again been given a new lease of life under Russ’s watchful eye – he’s a man obsessed with perfection, and having taken an already incredible base for his project he’s really elevated this 500bhp Sierra RS Cosworth to another level. 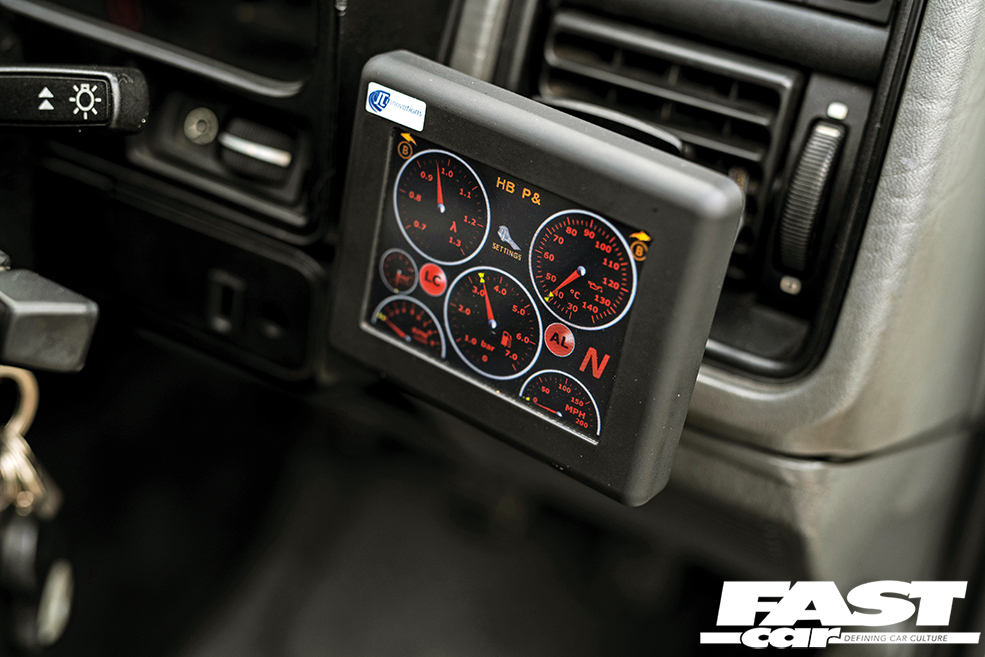 “I take the car to shows as often as I can, and every now and again I’ll go out just for a good drive,” he says. “Everywhere I go, people comment on how much they love it; it’s good to hear all the stories from back in the day. It’s a real head-turner, and I love that it gets respect from everyone, young or old.”

Presumably, not all these bystanders learnt to pull donuts in primary school, but there’s no doubt that this car attracts kindred spirits. And since Russ is keeping the Cossie forever, it’ll be his own kids one day dropping the clutch and ruining those tyres. There’ll always be new tales to tell.