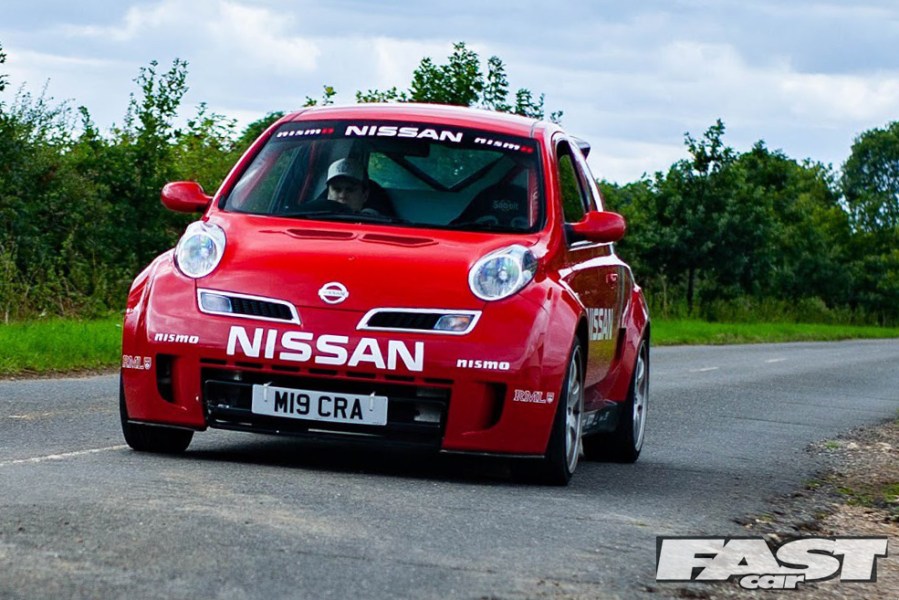 Sometimes, just sometimes, manufacturers have a sense of humour. Take this for example. We know it’s a Micra, but it’s not really a Micra, is it? OK, the shell is Micra-ish, although it’s wider, bulkier, with more vents and spoilers. Delve a little deeper and you’ll find more changes; so what’s this all about?

Well, In the early 2000s, Nissan unveiled its all-new Micra 160SR, the warmest version of the little hatch. To show off how good the body was, Nissan, along with RML (Ray Mallock Ltd), built something that can quite literally be described as a race car with number plates. Let’s run through proceedings…

The car was originally supplied with RML’s own Nissan BTCC engine, 2.0-litres in displacement, turbocharged, 265bhp and mated to a Hewland sequential gearbox; all fitted where the rear seats used to be. As you can imagine, not only could drivers not hear themselves think, but the heat was too much and the sequential box couldn’t be used on the road. It also wasn’t all-too reliable. Nissan had a rethink and provided RML with a Murano 3.5-litre V6 block. The guys then fitted 350Z heads, while Nismo engineers were flown in to install special high-lift cams and a custom ECU. The six-speed gearbox from an Altima SE-R (only sold in North America) was then mated to the V6 and the drivetrain was swapped from front-wheel drive to rear-wheel drive. Nismo also provided a new manifold and exhaust, which is essentially a tiny piece of metal where hopes and dreams end up erupting into a sound that, usually, can only be created by some sort of mythical beast.

The chassis is where the magic really happens, though. A roll-cage/space-frame combo was welded together before a custom Micra widebody was dropped over the top. The suspension comes from Proflex, who specialises primarily in motorsport-spec damping, the brakes were custom built by Brembo, 350mm in diameter and the front, 330mm at the rear, with an AP racing brake bias adjuster under the bonnet. Body rigidity is up 30%, while damping is so stiff that cornering is completely flat, with zero body roll.

Inside the race car treatment continued, everything was removed bar the electric windows and fans. The rest is gone, including the stereo, regular instrument panels and carpet. In place of the carpets are aluminium sheets, the seats come in the form of Sabelt buckets with 5-point harnesses. The airbags are gone, the regular steering wheel is booted, instead, a Sabelt quick-release steering wheel is in place. The passenger foot well has a fire extinguisher, and a separate extinguisher with connecting hoses is located behind the seats. In the event of a fire, or sparking up a Lambert and Butler, the cockpit and engine bay will be flooded with foam. Funnily enough, the indicator stalk and window wiper are still from a Micra, along with the electronically adjustable wing mirrors… it’s basically practical, right?

A master switch in the centre controls everything, including the electronic fans that can be easily be mistaken for the engine cut-off. The MoTeC digital display gives the driver all the information he or she could possibly want, from oil temperatures/pressures, to rev counter, engine temperature, water temperature and various other gizmos. The fuel tank is relocated from where it should be, under the rear seats (where the engine now resides), to where the engine should be, under the bonnet. Fuel station fill ups have never been so comical as people look across in horror thinking you’re chucking super-unleaded directly into the engine!

Nissan was keen to keep the car as drivable as possible and to even be able to use the car everyday. Chief Designer Stephane Schwartz said: “It’s equivalent to a bodybuilder. The Micra is the same guy as them. He’s just been down the gym now!” That seems like the understatement of the year to me – it’s more like this tuned Nissan has been injecting anabolic steroids!

HOW IS IT TO DRIVE?
Call me batshit crazy but I used this car as a daily for a week. First things first, don’t do that. While it is entirely possible, you just wouldn’t want to. It’s like saying you could listen to the same song everyday, it’ll be annoying. Driving the Micra is an event, and one you better be prepared for before you get in. It’s as raw as a car can be, it’s as loud as a Harrier and the clutch is unbearable. I’ve driven classic 911s, notorious for being difficult to drive with the heavy clutches, this car puts those into a similar category as a modern car. I don’t know who signed this off, but there is no need for it to be so stiff.

Therein lies my next point; traffic. Not only is the clutch impossible to negotiate, but the car overheats spectacularly when sat still. The MoTeC digital dashboard flashes with warnings of overheating the moment you stop; thankfully an extra set of fans initiate at a certain temperature and regulate things. The drone is the next point; the car is so loud that, in any gear at any point, your ears are ringing. The seats do their best at keeping you comfy but there’s no denying that any five-point harnesses is always amusing. Not only does it take you five minutes to get them on, but every passenger needs to be taught how to use them, and then they whine about reaching forward.

Right, now the moaning bit is out of the way I can provide some more useful information. This car is sublime when pushing on. The noise; I moaned about the drone, but when you open it up and pin the throttle to a smidgen over 7000rpm this car sings with the most tremendous V6 scream. It somehow sounds slightly

different to the 350Z, more in tune with the R35 GT-R in fact. It pulls ridiculously well, too, from as little as 2k rpm thanks to the torquey block. Gear changes are beautifully short and slot in perfectly. When it comes to stopping, the Brembos are superb, but you do have to remember to warm them up, you’ll feel nothing when cold. Also, the ABS is removed, so modulating braking until they’ve warmed up is essential.

This car was built entirely for its cornering abilities. The steering is so darty and precise, similar in fact to a Lotus Exige. It gives constant feedback, but not always in a positive way. It reacts negatively to tramlining, snatching the wheel at times, which can be unnerving. The body itself is immensely stiff, but the damping is almost comfy. Compared to hard race coilovers, that jump and skip across bumps because of stiffness, this rides them well. The rear is twitchy, but that’s to be expected from the dimensions of the car. It’s still a relatively short wheelbase despite being wider than usual, and the Micra dimensions being short, stubby and high also means that the rear struggles for traction and a little stability at speed. Quick gearchanges can cause the rear to snake… which is amusing.

On the whole, this car is as close to a go kart as is possible for a road car. Fast, loud, agile but above all else, ridiculously fun. While every drive was an event, it was a happy event, one that leaves you smiling at just how ludicrous it is. Want to hear something else crazy? This car is rumoured to have cost Nissan north of £250,000…