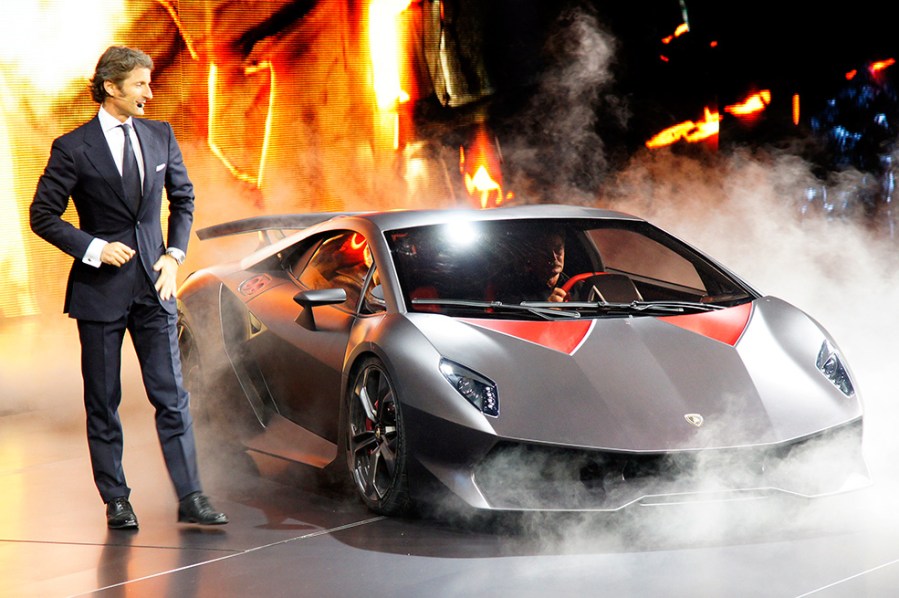 In simple terms, a V-engine is so called because if you crack it open, crouch down and peer along the crank, you’ll see the pistons being pushed diagonally up in two banks, forming a V shape.

See, it’s not a clever name, just logic. An engine in this configuration can be less lengthy and less tall, which means that they tick a lot of boxes when it comes to packaging, but we love them because they invariably make awesome noises.

It took a lot of discussion, whittling down the best V10 engined cars, but we’ve got it down to five legends. If your favourite one’s missing, why not pop a comment below the article and point it out?

Lamborghini Sesto Elemento
The Sesto Elemento isn’t really a car. It may have most of the ingredients of a car, but look at it – it’s clearly a spaceship, here to destroy humanity one laser-beam at a time.

‘Sesto Elemento’ means ‘Sixth Element’, referencing the atomic number of carbon. The reason for this becomes obvious when you squint at the bodywork, as it’s gorgeously raw carbon fibre throughout. This car basically took the Gallardo platform, stripped away everything you didn’t really need (along with quite a few things you did), and resulted in an extraordinarily focused limited-run special. They only built twenty of these, and presumably they’re all tucked away in darkened rooms in private collections now.

It’s one of those gloriously pointless cars that isn’t road-legal and isn’t eligible for any race series, so it’s just for rich people to hoon about on private track days. And hoon they might, thanks to a fabulously shouty 5.2-litre V10 that kicks out a raucous 570bhp.

This car doesn’t have any logical reason to exist. And that’s just why we love it.

Dodge Viper
When you ask people to name you a car with a V10 engine, the first answer will always be the Dodge Viper. This amazingly ridiculous car answered a question that it hadn’t actually occurred to anybody to ask – what’s the next step onward from Detroit’s love of V8s?

Motor City has been pioneering bigger and better V8s for generations, but the Viper just laughed in the face of that and went full Spinal Tap. It’s got two extra cylinders. So it’s bigger. And bigger is better. Don’t overthink it, that’s as complex as it needs to be.

The first-gen Viper appeared way back in 1992 with its engine effectively being a Chrysler V8 that had been redesigned and enlarged to ten cylinders by none other than Lamborghini. It had a manual gearbox (that’s right, in America, a stick!) that was seemingly made out of granite, and the car was really quite tricky to drive without fishtailing everywhere wreathed in tyresmoke. Just as a muscle car should be.

Oh, and the chief engineer on the project was called Dick Winkles. That will never stop being funny.

Bristol Fighter
This is one of the most inspiring acts of craziness ever carried out in the automotive world. Bristol have been flying under the radar for longer than anyone can comfortably remember with their belligerently weird cars. Often called ‘the thinking man’s Rolls-Royce’, these extremely rare, hand-crafted, hyper-expensive and uber-luxurious cars often hid Chrysler muscle car engines under their ugly noses (because Bristols were always ugly – they didn’t need to impress anyone). These were swanky saloons for posh connoisseurs.

…and then, in 2004, Bristol surprised everyone by building a supercar, completely out of nowhere. It was a fibreglass coupé with gullwing doors and, astonishingly, it had the 8.0-litre V10 from the Dodge Viper in it. Which was just madness.

Obviously nobody bought it, because Bristol owners didn’t want supercars and supercar owners didn’t want Bristols, but what a machine! The Sport version had 660bhp! But they only built thirteen Fighters, sadly. They also mooted a turbocharged version with 1,012bhp, but that was just silly and it never happened.

Porsche Carrera GT
“Carrera GT” is a pretty generic name for a Porsche – on paper, at least. But those that know, know. This is one of the most incredible and boundary-pushing machines the firm has ever produced; even now, fifteen years after it launched, it could pass for a brand new hypercar both in terms of looks and performance.

Its developmental roots lie in Le Mans racing, and it was originally supposed to have a flat-six turbo motor, which is all very Stuttgart. But somewhere along the line they decided to get all exotic, and – after a Hollywood-esque montage of chaps in clipboards looking serious and road-testers howling prototypes around steep banking – the Carrera GT emerged blinking into the light with a 5.7-litre V10 jammed into its spine.

With over 600bhp on offer, this sumptuous creation sold like wet wipes at a music festival, despite the half-a-million price tag. But then Porsche did something unprecedented: they stopped making it before they said they would. They’d promised to build 1,500, but when they passed the 1,200 mark they said ‘Alrighty, that’s your lot’. As such, it’s become something of a unicorn.

Audi RS6
We’re head-over-heels in love with the second-generation Audi RS6. It’s just such a ludicrous, unnecessary thing, it flicks our switch big time, snaps it off, glues it back on and flicks it again.

And, c’mon now, that’s just stupid. No family saloon car – or estate, come to that – should have that much engine crammed into it, people are going to get hurt.

Aha, but that’s what’s so special about it. It’s only pretending to be a sensible family car. The RS6 is actually a cunning supercar in disguise, with an extra set of doors and a helpful amount of luggage space.

Out of the 8,000 V10 RS6s built, 6,500 of them were estates, which makes it all the more entertaining. Can you think of a more amusing way to terrify your family when you’re off on a camping holiday? These things will do 0-62mph in 4.6 seconds, and the factory derestrict option unlocks 170mph+ potential. It’s essentially a Lamborghini Gallardo engine bolted to a family car. Hilarious.

Look out for the next instalment, our V12 faves! And see our favourite V8 engined cars.