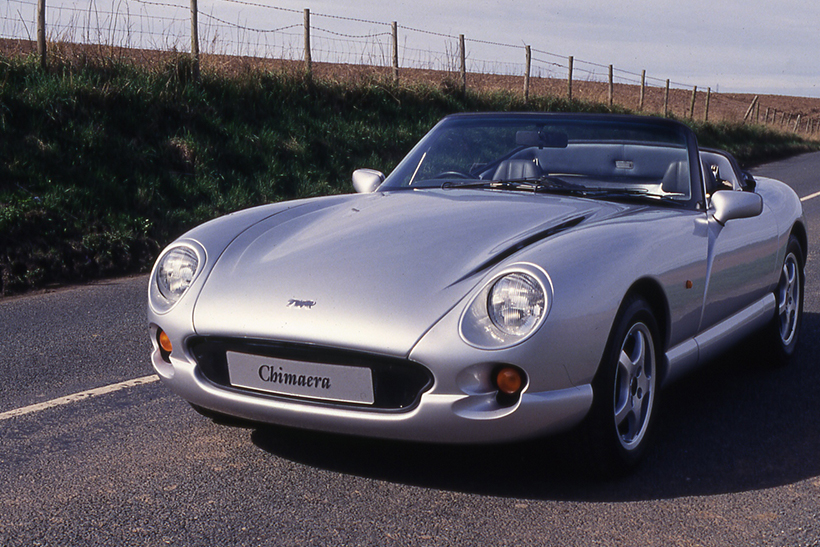 V-engines have been around for as long as the car itself. Way back in 1889 Daimler were nailing together pop-popping V-twins, and the first V8s arrived on the scene not long after in 1903.

In simple terms, a V-engine is so called because if you crack it open, crouch down and peer along the crank, you’ll see the pistons being pushed diagonally up in two banks, forming a V shape.

See, it’s not a clever name, just logic. An engine in this configuration can be less lengthy and less tall, which means that they tick a lot of boxes when it comes to packaging, but we love them because they invariably make awesome noises.

If you’ve ever heard a Morgan 3-Wheeler at full chat, its 2.0-litre V-twin thudding like hockey pucks in a Moulinex, you’ll feel this evocative vibration reverberating through your very soul.

It took a lot of discussion, whittling down the best V8 engined cars, but we’ve distilled it to five legends. If your favourite one’s missing, why not pop a comment below the article and point it out?

Rover SD1
The Rover V8 is such a ubiquitous engine, they can be found everywhere from the MGB GT to the classic Range Rover, via various TVRs, Triumphs, Ginettas and all sorts. The story goes that it originally began as the Buick 215 engine, used in various Buicks, Oldsmobiles and Pontiacs in the early-1960s, but they stopped making it because it was expensive to build, being made of aluminium. Rover’s then head of US operations was at the Buick factory to discuss gas turbines when he basically tripped over a 215, decided he fancied a bit of it, and bought the rights to the V8 for the UK.

Of all the cars it’s appeared in, we reckon the Rover SD1 is the coolest. The front end was deliberately stolen from the Ferrari Daytona, they made incredible police cars (look up ‘The Liver Run’ on YouTube), and they were awesome race cars too. Very noisy indeed.

Ariel Atom 500
The Ariel Atom is a hilarious creation. Whoever thought of bolting the engine from a Honda Civic Type R onto the back of a tangle of scaffolding to form an ultralight road-legal track car was some kind of twisted genius.

…but even more ingenious than that, and far more twisted, is the Atom 500. This features a bespoke 3.0-litre V8 which is basically two Suzuki superbike engines running off a common crank (sort of – it’s fiendishly complicated), and this gives it 475bhp. In a car that weighs 550kg. How bonkers is that? It’s got a power-to-weight ratio of 864bhp-per-tonne, which is double that of a Bugatti Veyron, and it’ll do 0-62mph in 2.2 seconds. It’s basically a GP2 race car with number plates. How can this be allowed?!

Dodge Demon
The V8 is such an apple-pie icon of Americana that we could have easily filled this list with Detroit muscle and nothing else, so it took some narrowing down to arrive at this: the Dodge Demon.

If you thought the Hellcat was nuts, this is just on another level. The ultimate version of the new-wave Challenger, the Demon is a basically a road-legal dragster that you can buy from a dealership with a warranty. Its 6.2-litre Hemi has a sodding great 2.7-litre supercharger on top, giving it a peak power figure of 808bhp on crummy American-spec 91-octane pump fuel. Imagine what it’d do on Shell V-Power…

The development team actually designed it to be a production car that could pull wheelies from a standing start, and the specs are insane: 315-section Nitto tyres (on the front too!), only one seat – unless you pay a dollar to add the other seats back in, line-lock, and a ‘Power Chiller’ that hijacks the air-con to pre-chill the intercooler. Quite possibly the angriest car ever built.

Morgan Plus 8
Morgan have a reputation for being a bit quirky. Cars for eccentrics and, perhaps, people of advanced years. But this reputation is unfounded, as they’ve always been about the giddy hedonistic thrill of tearing about the countryside in small, beautifully handcrafted cars with engines that are clearly far more powerful than necessary. But what is ‘necessary’, really?

The current Plus 8 is a case in point. It features a 4.8-litre BMW V8, like you’d find in a 650i or an X5, mated to 6-speed Steptronic transmission. This serves up an almighty 367bhp in a car that weighs just 1,100kg. Sure, it’s luxuriously trimmed with super-soft leather and sublime switchgear, but it’s also got massive Rays alloys with vast AP Racing brakes peeping through. It may appear to be the sort of thing driven by people in paisley headscarves, but take it from us – those drivers are actually total headcases.

TVR Chimaera
In Greek mythology, the slightly-differently-spelled Chimera was a creature made up of parts of different animals, which sort of makes sense here, as this TVR rocks a Rover V8.

Yes, we’re back to the Rover lump again, but it’s not in sensible 3.5-litre form; early Chimaeras had a 4.0-litre version offering 240bhp, and the motor kept swelling over the years until the last cars off the line had monstrous 340bhp 5.0-litre V8s.

The thing only weighs a tonne, can hit 62mph in four seconds, and has one of the most gorgeous interiors you’ve ever seen, so it makes an excellent high-speed grand tourer. Well, until it breaks down. Which, because it’s a TVR, happens all the time.

Look out for the next instalment, our V10 faves! And see our favourite V6 engined cars.