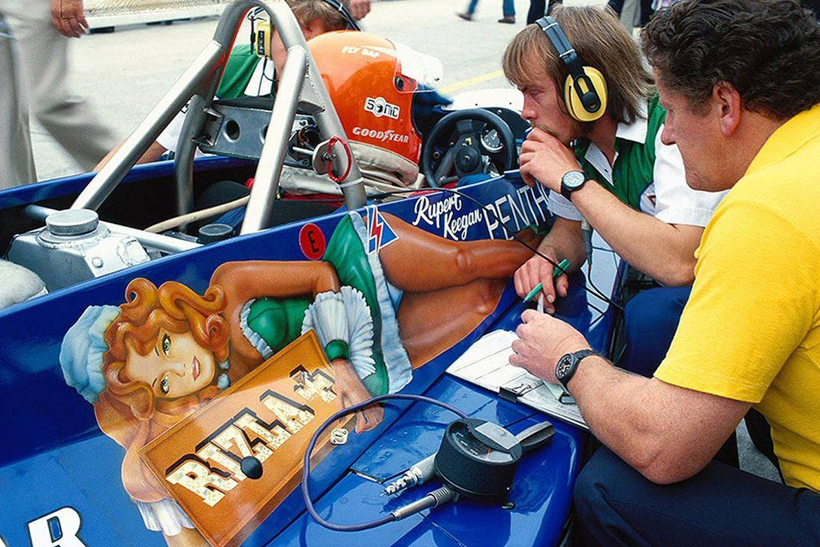 Looking for inspiration for a rare race car livery? Look no further than our list of the best unique racing car liveries…

One of our favourite modifying trends that’s been emerging on the show scene in the last couple of years is the classic race livery tribute. People have been dressing up their road cars in race-style livery for generations of course, that in itself is nothing new – but what we’re really loving right now is the individuality that’s shining through on the scene.

There’s always a certain element of one-upmanship that happens when it comes to having the freshest wheels, the most aggressive stance, the shoutiest screamer pipe or what-have-you, and the penchant for offbeat paint colours these days is really emulating the 1990s passion for shockingly bright shades.

There’s also a lot of brown around these days, and we’re all for that. But what’s really bubbled up to the surface recently is the offbeat design of some of the artfully weathered retro race wraps we’re seeing.

It’s really cool to take inspiration from the livery of an old-school race car and redesign it slightly to fit your own project, but what’s even cooler is to design it so that it looks like your car’s fresh from the race track: scratches and scrapes, Armco rash, dead flies, rubber marks from wheel-to-wheel apex-hunting, it’s an incredibly eye-catching way of making your car look super-hardcore.

What we want to do now is to inspire you. To give you a few fresh ideas, pique your interest, get those creative juices flowing. You see, there are certain iconic race liveries which everyone defaults to – the ones that have always looked fantastic but, by nature of how good-looking they are, have been done a million times before.

So we’re not going to suggest you go with the blue-and-orange Gulf colours, or the black-and-gold JPS livery from old Lotus F1 cars, or the Rothmans design seen on countless rally Escorts and Porsche endurance racers.

There are no Martini stripes here. We’ve dug around in the archives for the tastiest offbeat race car liveries, the ones that could really make a statement. Why not try one of these out for yourself? Or better yet, seek out something truly obscure from history, something that will ensure your car’s always a talking point? There’s a world of old race cars out there…

BASF
The element of surprise is a very useful thing in motorsport, when it comes to power or setup or simply taking avant-garde lines through corners – and this extends to liveries too. The oh-so-retro BASF circles design is one of the all-time greats simply because it’s such a headfuck for everyone else on track. You can totally put everyone else off simply by making your car look like a cross between a Magic Eye picture and something from a kid’s Spirograph.

This startling design debuted on Hans Stuck’s BMW M1 Procar back in 1981, and it did an amazing job of making the wedge-shaped supercar look like it was all sorts of different shapes depending on which angle you looked at it from. Eagle-eyed scene kids may remember Elliott from sister-mag Performance VW wrapping his Audi A4 Avant in this livery a few years back; we reckon now’s the time to crack out this design on a smaller car, something like a Fiat 500 or an Audi A1, to really accentuate those trippy swirling circles.

Penthouse Rizla
James Hunt is one of the all-time motorsport legends. We’re unlikely to see his kind again, as he represents the very antithesis of what a modern sportsman is. Today’s racing drivers have supremely balanced diets and exercise regimes, they have early nights, they have to be careful because the sponsors are always watching.

The Hesketh 308E of 1977 actually debuted two years after Hunt left and signed with McLaren, but his playboy spirit clearly lived on; the car had the Penthouse name slathered all over it, along with images of alluringly reclining young ladies, and for good measure they slapped the Rizla name on it too. Combining two of Hunt’s favourite things; they should have gone for the triple and called it Penthouse-Rizla-and-loads-of-Champagne.

Golden Wonder
Everyone likes crisps, right? And they make an ideal in-car snack too. Cars and crisps are a pretty logical pairing.

When Ken Wood and Peter Brown turned up at the Trossachs Rally in 1985 with ‘Golden Wonder’ written all over their Metro 6R4, every single spectator immediately ran to the concessions stands to satisfy their sudden hunger for salty potato snacks. Er, possibly. And this livery is a great one to recreate today, for two reasons: firstly, the font is really jaunty. Secondly, it’s bright orange, so nobody will miss the startling effect of what you’ve done.

Of course, you might not necessarily want to resurrect the name of a dead crisp brand – so why not rework this to incorporate your favourite contemporary pub snack? We’d love to see a bagged MINI wrapped in Mr Porky’s Pork Scratchings, or a Rocket Bunny S14 covered in Scampi Fries.

Ueno Clinic
Self-effacing gags often make the most fun liveries. There’s a Polo on the scene right now with a mock-Golden Virginia wrap that actually reads ‘Golden Vagina’. It’s good to poke a little fun at yourself. So the Ueno Clinic might be an entertaining one to try on your current project…

This one works on two levels. Firstly, some people will recognise it as being the livery run on the McLaren F1 that won the Le Mans 24hr in 1995. This will be enough to earn you nods of respect from people in the know. But secondly, there’s a deeper level – some people know what the Ueno Clinic actually is.

It’s a surgery in Tokyo that specialises in the treatment of sexually transmitted diseases, and a condition called phimosis – which we wouldn’t recommend you stick into Google Images if you’re reading this at work. The Ueno Clinic design is a really crisp black-and-white livery too, which would surely work equally well with the name of your own local STD treatment centre.

Gold Leaf
This is one that has been done here and there – most notably by Lotus on special editions of the Elise and Exige, and numerous owners of NA MX-5s – but it’s surprisingly overlooked given how significant these colours are. You see, the Gold Leaf design was the first ever proper sponsor race livery; it’s the grandfather of everything else you see on these pages, and the reason why race car liveries are beautifully designed rather than just writing the names of sponsors on cars in generic fonts.

The Lotus 49 F1 car had been run in British Racing Green until Colin Chapman signed a lucrative deal with the Gold Leaf cigarette company, painting his cars in the snout brand’s now-iconic red, cream and gold for the 1968 Spanish Grand Prix. The original and perhaps the best, and a genuinely pretty colour scheme that would suit most cars, we reckon.

Listerine
Some of the most wicked liveries are the ones that manage to transcend the inherently uncool products they’re advertising. Much like the Kaliber Sierra RS500s (zero-alcohol lager doesn’t have the most street cred, but those cars looked awesome), the Listerine E36 BTCC racers looked outstanding, despite advertising a product aimed at people with halitosis and iffy gums.

The 318is cut quite a dash as a race car as it was, its sleek coupé form having an inherent stylishness; admittedly on paper the Listerine livery sounds like a bit of a mess – mint green body with bright yellow lower section, M-Power tricolour stripes on the rear quarters, black bonnet with huge Listerine dragon mural – but in reality it was fantastic. With the legendary Tim Harvey at the wheel, how could it lose?

This would be a great one to try if you’re running a new-wave BMW project (or, of course, an E36), and it’d be a tip-top way to show your neighbours that you’re passionate about oral hygiene.

Alan Mann Racing
This, in itself, isn’t a rare livery. Indeed, owing to the popularity and success of the various Alan Mann race cars over the years, you see this on quite a lot of project Mk1 Escorts and Cortinas. But our idea here is this: why not try it out on something newer that isn’t a Ford?

The history of the scheme begins with the Lotus Cortina, which was sold from the factory in Ermine White with Sherwood Green side-stripes. (That’s a nerdy fact you can memorise for your next pub quiz.) A lot of teams raced in these stock colours and Alan Mann wanted his racers to stand out, so he stole a shade of red from Ferrari and offset it with a lovely liquidy gold for the roof and side-stripes. This paintjob was subsequently used on Escorts, GT40s, Falcons, and any Ford that AMR turned their hand to.

But with the contemporary enthusiasm for adding Ferrari wheels, Ferrari seats and what-have-you to all sorts of VAG and Euro builds these days, why not the paint too? Imagine how good the combination of Ferrari red and liquid gold would look on something big and slammed, like an Arteon or an RS6.

Durex
Well, we couldn’t leave this one out, could we? It’s even more in-your-face than Penthouse-Rizla, and slightly less eyebrow-raising than the Ueno Clinic; in fact, it’s a big, bold statement of intent.

As you can probably imagine, this sponsorship deal caused controversy right from the start. When the Surtees Formula One team signed up Durex as a sponsor back in 1976, the BBC refused to screen the early races in that season so as not to offend viewers. (Urgh, people have sex, imagine that! Gross!)

Thankfully sense prevailed in the end, which is just as well as the Durex livery was a very brave thing for the London Rubber Company to create: after all, it’d be pretty bad PR for a condom brand if the car it’s name was written on ever got a puncture, and race cars get punctures quite a lot.

Also worthy of mention here is the Viagra sponsorship on Mark Martin’s NASCAR in the early-2000s – if you want to shove your figurative wang in the viewing public’s faces, that’s a hell of a way to do it. Although it wasn’t a great livery, it just said ‘VIAGRA’ in massive letters down the sides. The Durex design, however? That’s stylish enough to spruce up any modern project car with elegance and panache. And perhaps a bit of a smirk.

Gitanes
We’d never be so irresponsible as to condone smoking, but you can’t deny that tobacco liveries have always been the coolest – JPS, Marlboro, Rothmans, Benson & Hedges… back in the days when it was socially acceptable to have the name of a pack of tabs plastered all over your race car, the design teams went all-out to impress.

But one of our favourites, and one that you don’t see a lot of people emulating on road cars nowadays, is the classic Gitanes livery. These harsh French fags, which are solely responsible for the fact that every famous French singer has a gravelly voice, lent themselves rather well to having their italic nomenclature signwritten on race cars.

The blue-and-white appeared on quite a few F1 cars, endurance racers and open-wheelers over the years, from Ligiers and Talbots to Alpines and Renaults, but the fact that it looked so utterly stunning on BMW E28 and Ford Capri touring cars suggests to us that this is a livery which would translate to any crisply-styled tin-top. And hey, everyone’s rocking the Marlboro and Rothmans stripes – Gitanes has a bit of continental flair, doesn’t it?