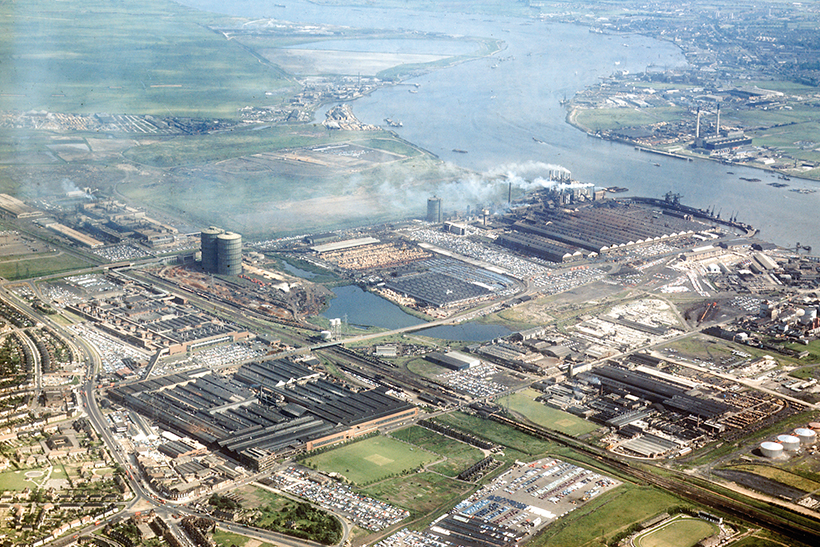 1. The prestigious HS1 (High Speed) railway, which now links London with France and Belgium via the Channel Tunnel, runs right through the centre of the Dagenham estate. Although not yet up to their maximum cruising speeds, the trains are already exceeding 100mph at that point.

2. Although Dagenham was a prime site for enemy bombing during the Second World War, and was hit repeatedly, it was rarely out of action. During that conflict, many thousands of converted vans, trucks and tractors were produced for the military effort, along with thousands of V8 engines, which went into military machinery like the ubiquitous Bren gun carriers.

3. What became Ford’s vast Dagenham site was no more than a boggy waste land until the company bought it in the mid-1920s. The London suburb we now know as Dagenham didn’t exist either. The first vehicle to roll off assembly lines at Dagenham in 1931 was a truck. The first private cars – the 60mph 8bhp Model Y saloons, followed a year later.

4. Many years ago, the same site received iron ore by ship to the Thames-side foundry, along with huge rolls of sheet steel, and the entire car was then completed on site, with only specialised items such as electric components, tyres and glass having to be supplied from elsewhere. At its peak, Dagenham could build up to half-a-million vehicles a year – in the mid-1960s, for instance, up to 250,000 Cortinas were produced every year.

5. The last complete car to leave the Dagenham site was a Fiesta, built in 2002, after which the modern PTA (Paint Trim Assembly) complex was demolished. In seventy-one years, almost 11 million cars, vans, tractors, trucks and military vehicles were built there.

6. Over the years, surprisingly few ‘fast Ford’ production cars were actually assembled at Dagenham – the most notable probably being the MkII Lotus-Cortina of 1967-1970. Other famous machines, such as the Escort RS1600, the Sierra RS Cosworth, the Escort RS Cosworth, the RS200 and high-performance versions of the Capri, the Mondeo and the Focus, were all built elsewhere.

7. What was the fastest Ford road car ever to be assembled at Dagenham? Apart from the Lotus-Cortina, already mentioned, it was probably one of the high-performance FWD Fiestas produced in the early 1990s.

8. One of the storage compounds used for new cars at Dagenham for many years was Frog Island, whose original naming is shrouded in a great deal of mystery and conjecture. One of the most colourful is that at one time it was used as a prisoner-of-war camp for continental prisoners taken during the Napoleonic conflicts in earlier centuries.

9. With the site largely cleared in recent years, so much space was readily available that the ultra-complex Opening and Closing ceremonies for the 2012 Olympic Games were carefully and triumphantly rehearsed in the weeks leading up to that famous occasion.

10. Redeveloped in recent years, what remains of the Dagenham estate is now Ford’s largest global producer of diesel engines. More than a million diesels are produced every year, and the 40 millionth total engine build mark was passed in 2012. Those engines not only power Ford cars, but have also been
supplied to Volvo, Citroen, Peugeot, Mazda, Jaguar and Range Rover in recent years.