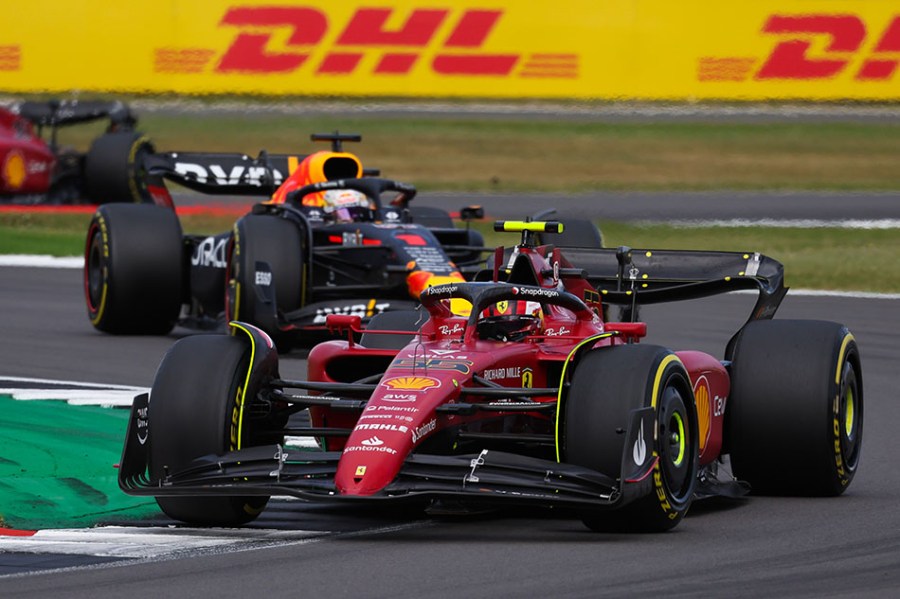 Silverstone’s 142,000 spectators left the circuit late on Sunday night with memories of a thrilling 2022 Formula One British GP and a happy, maiden victory for Ferrari’s Carlos Sainz.

But to use a metaphor that Bernie Ecclestone would approve of, Formula 1 dodged a bullet last weekend at the 2022 British GP. Alarming photographs and videos of Zhou Guanyu ’s horrific startline accident showed how lucky the Chinese driver was to emerge unharmed.

The absence of his roll hoop and the position of his Alfa Romeo beyond the tyre wall, wedged between the catch fencing, belied a miracle escape. Although his halo undoubtedly saved his life, it did make extraction awkward. Additionally, the fact the car hit the fence floor first and was ultimately stopped, thankfully meant the crowd in the grandstand escaped serious injury. But being peppered with flying gravel and hydraulic fluid isn’t particularly pleasant.

Zhou was flipped upside down on the run to the high-speed Turn 1 by George Russell. The Mercedes man started on the hard tyre and was slow away. Pierre Gasly attempted to squeeze between Zhou and Russell, but the ensuing contact sent Russell sideways and he clipped the right-rear of the Alfa. In an instant, Zhou was upside down heading towards the Turn 1 gravel trap, where the Alfa dug in and was launched clean over the tyre wall and into the catch fencing – narrowly missing a couple of photographers. 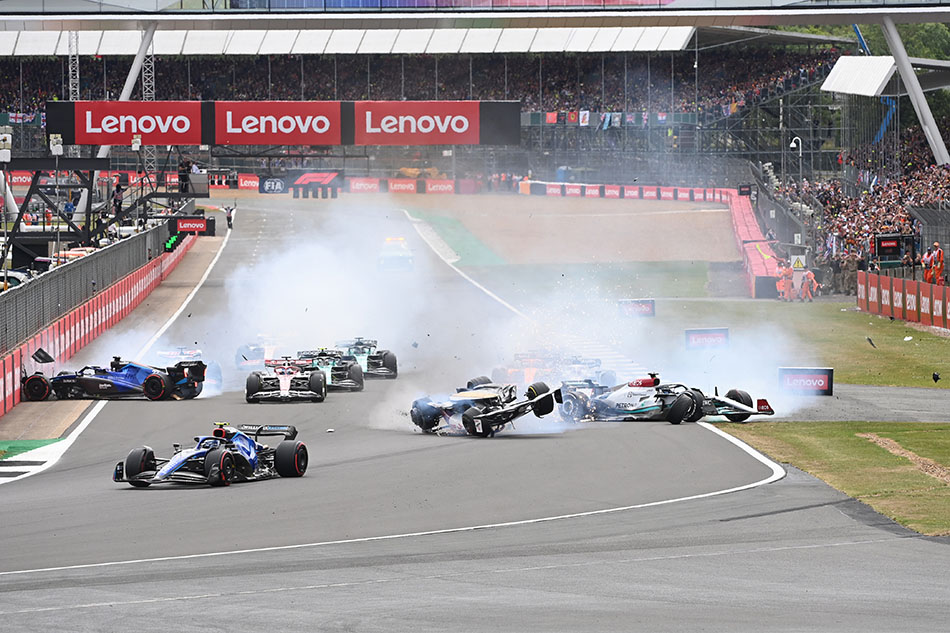 Behind them was more chaos as Sebastian Vettel locked up and hit Alex Albon. That sent the Williams into the nearside pitwall and back in front of the pack whereupon he was hit by both Esteban Ocon and Yuki Tsunoda.

Given the severity of the incident, the red flag quickly came out to stop the race. Russell, fearing for Zhou, jumped out of his Mercedes and immediately ran across the gravel trap to check on his fellow racer. That act of selflessness ultimately cost him potential points, as he was prevented from continuing because his car had received ‘outside assistance.’

But apart from Albon and Zhou, the other drivers’ broken machines were repaired in the hour-long delay for a restart.

Further around the lap, as the pack headed down the Wellington Straight, a number of anti-oil protesters had found their way onto the circuit. Despite credible police evidence that such an event would take place, the fact they managed to reach and sit on the Tarmac was a shocking development. Thankfully the race had been neutralised as otherwise the consequences of cars at high-speed making contact with these individuals would have been catastrophic. Critical questions about security arrangements will need to be addressed. 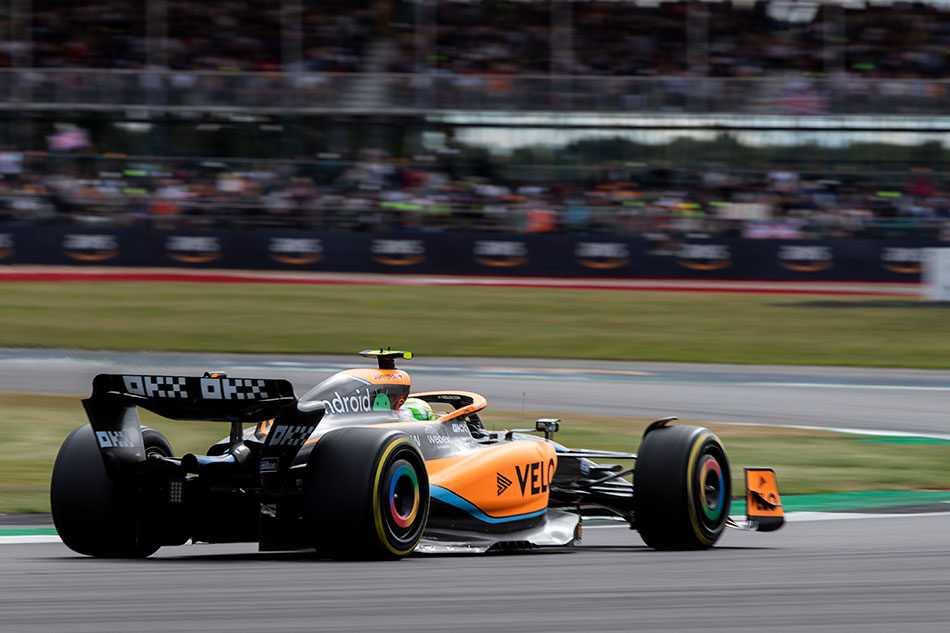 In all of the excitement, Max Verstappen had taken the lead from poleman Carlos Sainz, while Lewis Hamilton had bagged third. But when the race resumed again an hour later, it was with the original grid order.

Second time around Sainz held off Verstappen, but entering the Loop, Charles Leclerc clattered into Sergio Perez to grab third. In the move, both cars lost parts of their front wing endplate and after a few laps, the Mexican was forced to pit for a new wing and dropped to 16th.

Up front, Verstappen started to close up on Sainz and on lap 10 he inherited the lead when the Spaniard made a small mistake at Becketts and ran wide at Chapel.

Two laps later, the Spaniard reclaimed the lead on the run down Hangar Straight. Verstappen had suddenly slowed and fearing he had a puncture, came into the pits. He later explained that he couldn’t avoid a piece of debris on the track (which had come from contact between the two AlphaTauris) and it significantly damaged the underside of his floor. 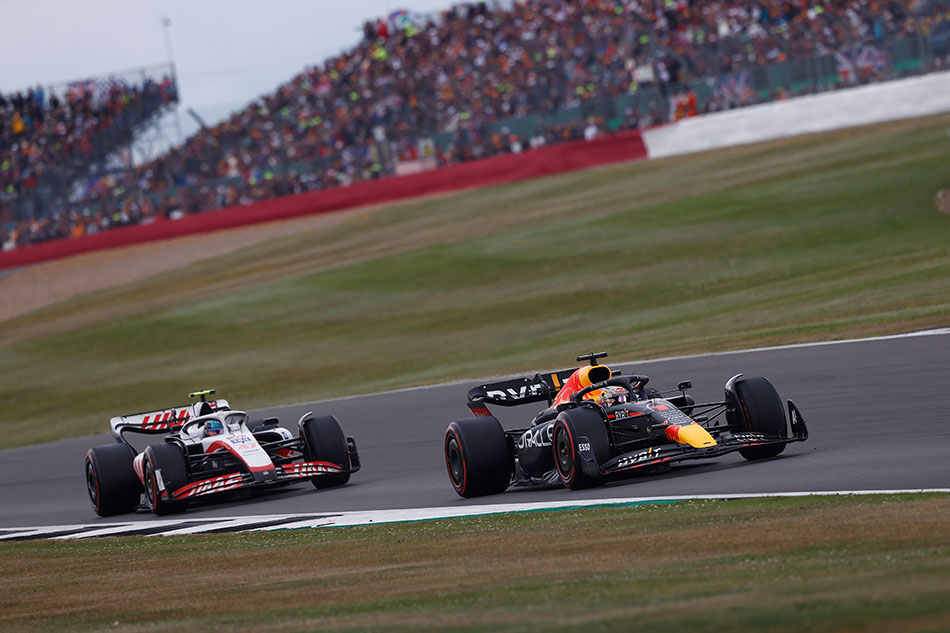 With so much downforce generated from the Venturi tunnels under the car, this damage severely compromised his performance – and at the flag he just managed to hold on to seventh, one place ahead of a hard-charging Mick Schumacher.

With Verstappen out of the equation, the focus was now on the two Ferraris up front and Hamilton in third. Although Leclerc was driving with a damaged front wing, he was quicker than Sainz and asked his engineer to give his team-mate the hurry up.

“Do something please,” said Leclerc. “I’m not trying to influence the result, but I can go faster…”

On lap 20 Sainz pitted for fresh tyres, handing the lead to Leclerc, who was just 1.5s ahead of the Mercedes. Five laps later, Leclerc made his compulsory stop and emerged behind his team-mate once more. Again he was on the radio to his team to question tactics. With Hamilton staying out and making in-roads into their lead — this was a critical point in the race.

Ferrari decided to swap positions. On the Wellington Straight on lap 31, Sainz conceded P1 to Leclerc. It was the right decision because the patriotic crowd could sense this was their hero’s best chance to take his first victory of the year and they willed Hamilton on in their desire to see another famous home win. 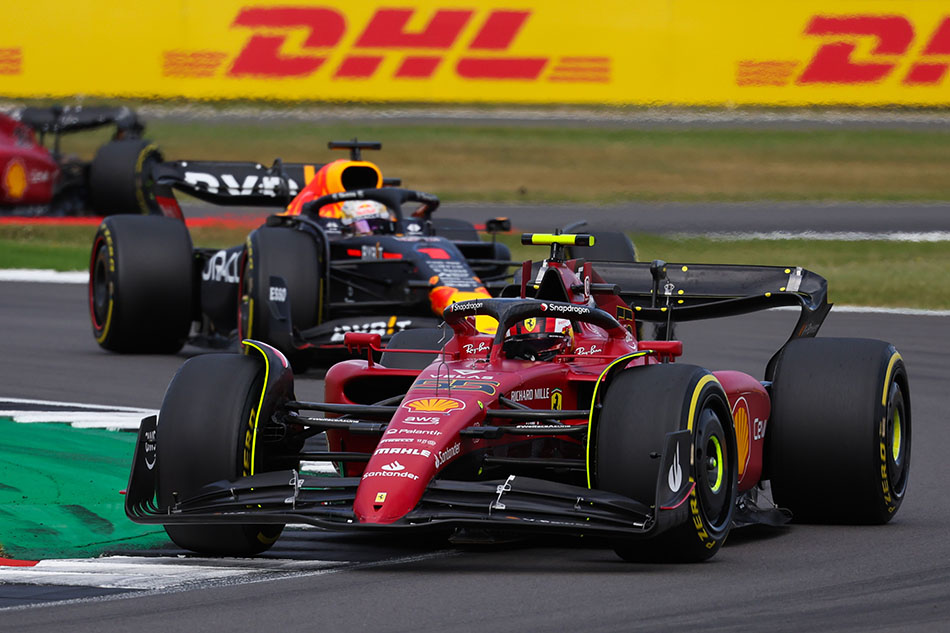 But in the event, when Hamilton did pit at the end of lap 32, his was a tardy 4.3s stop and he came back out behind the Ferraris. Then on lap 39 the race took another dramatic turn. Esteban Ocon’s Alpine suddenly suffered fuel pump problems and he rolled to a halt on the old start/finish straight. Cue the safety car.

Ferrari decided to retain track position and kept Leclerc in the lead on old hard rubber. But behind him, Sainz – and Hamilton – dived into the pits to fit fresh, soft tyres. The closing up of the field also enabled Perez to rejoin the frontrunners and he too fitted softs.

At the restart, Ferrari asked Sainz to give Leclerc a little more space, to help with his tyre warm-up on the hard compound. But the Spaniard gave a robust response: “Guys, I’m going to be a lot quicker than Charles,” he said. 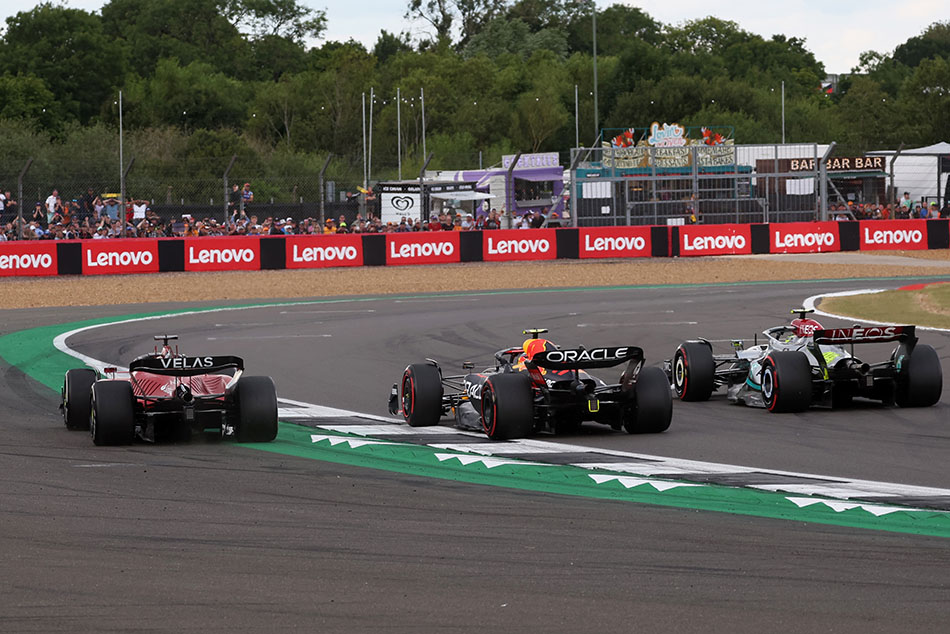 When the safety car peeled in, it led to some of the most exhilarating racing in years. Sainz passed Leclerc for the lead going into Brooklands, while behind them Perez took Hamilton for third.

Then on the next lap, Perez attempted to take Leclerc into Club. The pair ran wide and to the delight of the crowd, Hamilton nabbed through on the inside to take both positions. Perez then re-passed Hamilton at Abbey, while Leclerc hung it out around the outside of Copse to claim his place back. The British driver was back in front once more at Stowe. It was truly epic, wheel-to-wheel racing that the sport was so keen to engineer with this new generation of car. And on this day, the 2022 regs were a success.

While Hamilton was ultimately disappointed to finish in third at the 2022 Formula One British GP, he couldn’t help mention the thrilling duel with Leclerc. “The two of us went through Copse no problem,” he said. “It was a bit different to last year…” 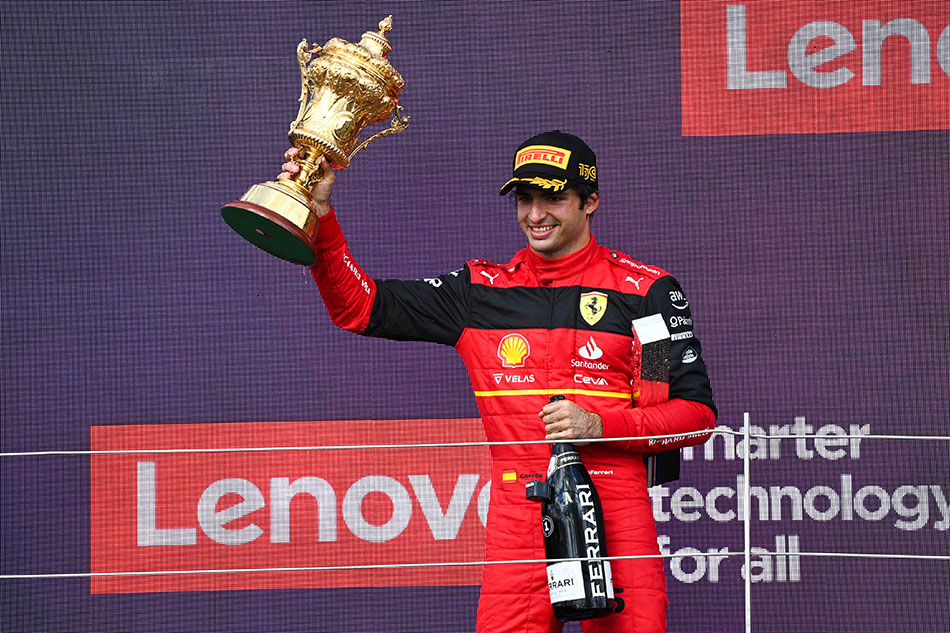 Sainz scampered off into the lead, ahead of Perez, to claim a memorable first victory in F1. And while it wasn’t quite the result the crowd wanted, it was at least a popular and exciting scrap to the flag.

When Hamilton came into the cool-down room after the race, the British driver congratulated Sainz to which he replied on the performance of the Mercedes: “Are you officially back now?” he asked.