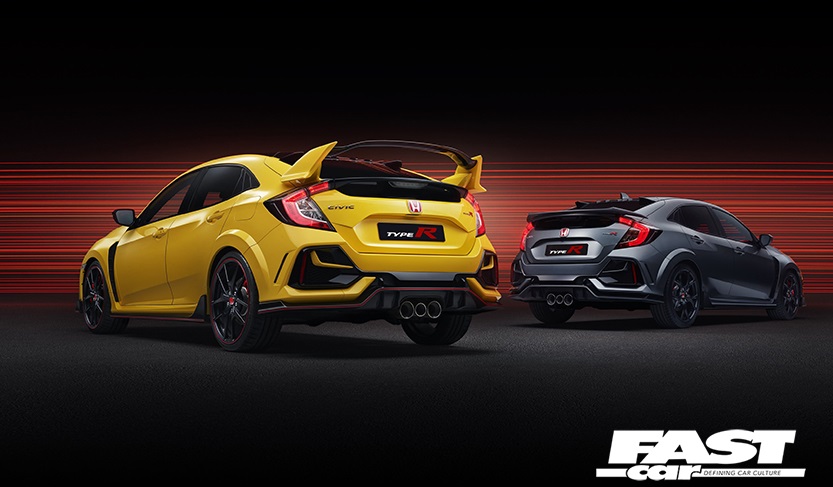 Honda has treated the FK8 to a mid-life upgrade with two new editions making their way into the line up; a Limited Edition yellow model and Sport Line.

First up, there’s finally a track-focused variant known as the Limited Edition. Only 100 of these bumble bees are coming to Europe and it comes without the infotainment system, nor the air con. Limited Edition by name, limited by nature… Alongside this, some sound proofing has found its way to the bin and the result is a car that’s 47kg lighter. Oh, and it’s very yellow.

That weight saving doesn’t seem all that impressive from the off, but there are further changes, don’t worry. While the power hasn’t been increased, the suspension has been modified and now includes stickier track-focused tyres wrapped around lightweight BBS wheels. Honda decided to retain the rear seats unlike Renault in favour of everyday usability.

Those who weren’t convinced by the FK8 Type R’s styling now have a “touring” option, or as its officially called “Sport Line”. First up, that rear wing is no more, replacing it is a much subtler spoiler. Inside, the red highlights have gone to give a more neutral look and less racy. The good thing is that power remains the same, so you still get 316bhp and 295lb ft from the 2.0-litre turbocharged four-pot.

Inside, the boot gets extra sound proofing in the boot, an improved infotainment system with physical menu buttons, something we complained about in our review a few months back. It also gets upgraded brakes, a big front grille for improved cooling and a new amplifier for the engine note.

Which one do you prefer?