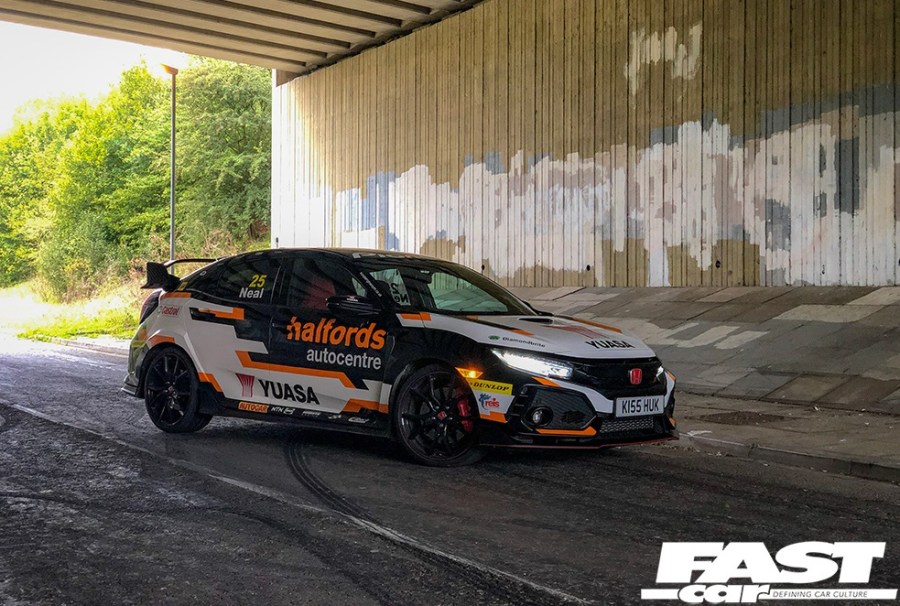 It looks lairy enough, but what’s the Honda Civic Type R FK8 like on the road? We called up Honda to find out.

Thirty years ago Honda released the NSX; the everyday supercar that punished Ferrari’s lack of development. It took time for the NSX to be appreciated, but today, prices are beginning to pick up with NA2 NSX-Rs going for some £250k…

The point here is that in 1989, 276bhp, and subsequent 290bhp in NA2, 3.2-litre form, was enough to be classed as a supercar. Today, the brackets have very much been broadened, with hot-hatches nudging 400 horses, albeit weighing the same as a tanker.

The Civic Type R FK8, then, is considered relatively light at 1380kg, which is bonkers, given it weighs the same as the original NSX which had a V6 engine. Let’s compare figures; 0-60mph in 5.8 seconds for both and 168mph vs 169mph (FK8). This is how far hot-hatches have come along and the FK8 promises to be the best.

First, though, shall we talk about those stickers? You know what I’m on about. It’s hardly inconspicuous is it… This FK8 is dressed up as a replica to the car that Honda races in BTCC. More often than not it’s delivered to journalists who attend a race weekend as a guest of Honda, which we recently did. Anyway, on to the drive.

We no longer have a free-revving, screaming VTEC engine that you have to nudge off the limiter to get anywhere; instead is a 2.0-litre four-pot, helped along by a baby turbo. By doing so, torque is now 295lb ft, not a measly 150… That’s noticeable in any gear, but prevalent when someone tries to edge you along on a stretch of road and you just have to flex you right foot to wave goodbye.

That’s the next thing you’ll notice. The FK8 is a truly fast car out of the factory; despite only chucking the power through the front wheels, you’ll rarely be squabbling for grip. Instead, the Torsen Limited Slip Diff helps transfer that power on to the road, rather than waste it. So, notch it into third and hit the floor with the pedal, easy.

Urm, where’s the sound? It’s eerily silent inside, let alone outside. In fact I floored it out of Trax Silverstone (sorry boss) after being welcomed by the abundance of phones pointed at me (the stickers are to blame) and I felt embarrassed. It doesn’t make a grunty sound, just a slight whistle. If you weren’t looking, you’d have just thought the wind picked up a few notches. That needs changing, ASAP.

Forget the noise for a second, though. Find a quiet b-road, turn your music down and just drive. Corner to corner I’m yet to find a car as capable, yet easy to drive as the FK8. This car will make you feel like Ayrton Senna, when in reality you’re fat Dave who’s using the built-in auto-blip downshift to nail the set of apexes. The proper car journalists over at Evo and the like will be furious over this, but in reality, it’s a brilliant piece of kit that only adds to your driving experience. It enables you to drive harder with more confidence and in time you’ll transfer over to heeling and toeing by yourself for that extra level of reward. Oh, and by the way, Honda has perfected its pedal positioning for this, its just too easy to drift over and blip the throttle without any trouble.

Back to pretending I’m Ayrton Senna; throw it into a tight corner, feather throttle mid-corner and pin it on exit. The grip is mind-blowing. Think you’ve gone in too deep? Lean into the throttle gently, turn tighter and the car does the rest. It really is that easy. This all sounds like a boring car, but in truth the car does a brilliant job of making you think you’ve done all that hard work. That you too could be an F1 driver if only you were given the opportunity. When you hit that 30mph zone, it may as well have a hand that comes out from the boot and gives you a big pat on the back and says well done, you’re a pro.

While I moaned about that exhaust before, where it makes sense is when you wake up at 6am for a show, the cold start is nothing but a low humming noise. Hop in, point the sat-nav in the direction of travel and off you go.

Those Recaros are gorgeous; enough hugging to support you through the corners and enough comfort to make you wish you could sit in it all day. We know Recaro make brilliant seats, but these, adorned in red suede are the tits, nothing more, nothing less.

It comes as standard with a touchscreen infotainment system in the dash, although I personally have grievances with touchscreens (hit a bump with this stiff suspension and your hand presses something entirely different) I can’t really complain with the way it operates. One thing that is frustrating – and chatting to other FK8 owners who feel the same way – is the lack of physical climate control buttons. You have to hit the climate button and then adjust the fan speed and direction on the screen, which leaves you spending too long with your eyes off of the road.

I wasn’t going to mention the safety systems, usually because it would involve a long and arduous paragraph with me moaning about their existence. But, I have to say, when the pillock who failed to notice me approaching and pulled straight out in front of me (yep, in a stickered up car…) the car jumped on the brakes in torrential rain and brought the car to a stop before the collision could happen. You can see why they exist with the number of morons driving on the roads. The other point is that you can turn them off, kudos to Honda.

The steering is electric, which is both good and bad. On the plus side, when manoeuvring in car parks, the steering goes ultra-light and makes it easy to negotiate. When you up the ante and switch to “R” mode, the steering loads up to make you feel like you’re working the car. Those being picky would moan that the lack of feel through electric steering is a huge problem; let’s be honest, we’ve moved on from those days, like it or lump it, this is what we have and Honda has done a good job of creating some feel, albeit artificial.

On the topic of “R” mode, we finally have drive modes for the suspension, throttle and steering. Something that compromised the FK2 was the lack of drive modes, which meant the stiff suspension was a constant and R mode was unbearable. Here we have comfort, sport and R, with the default setting being sport. This means that the suspension and throttle mapping are on the sharper side of things, but useable on the road. Auto-blip downshift here is only available above 2krpm. Switch it to comfort and the throttle mapping softens, meaning you have to use more throttle to push on. The suspension softens resulting in an acceptable drive that pleased even my parents who usually moan how stiff the cars are that I have. That leaves us with R mode, all-guns-blazing, featuring the sharpest throttle response, stiffest damper settings and heaviest steering. I didn’t think I’d notice the difference, but switching from comfort to R on the same piece of road leaves you jiggling about in your seat. On the road, there really isn’t a need for R mode, leave it in sport, you’ll be happier.

Those thinking of buying one for the performance alone but need to sell the idea to the missus, or husband, no prejudice here, will be glad to hear that the biggest weapon in the arsenal is practicality. This is a big car, ISOFIX points are present in the rear for small persons, and the boot is huge! I moved house with the FK8; with the seats folded flat, I fitted a questionable amount of crap in it to the point I was beginning to have a game of how much stuff I could fit in.

In a world of sensibility, the FK8 brings back the inner child that we’ve all missed. The outrageous bodykit harks back to rosier times and helps it stand out from the likes of the very capable but utterly boring Golf R. It’s fast, practical and has brilliant road presence. What’s not to love? For me it’s one of the best hot-hatches of recent years.

While the standard car is mind-blowingly capable everywhere, there’s still a long list of stuff we’d want to change: