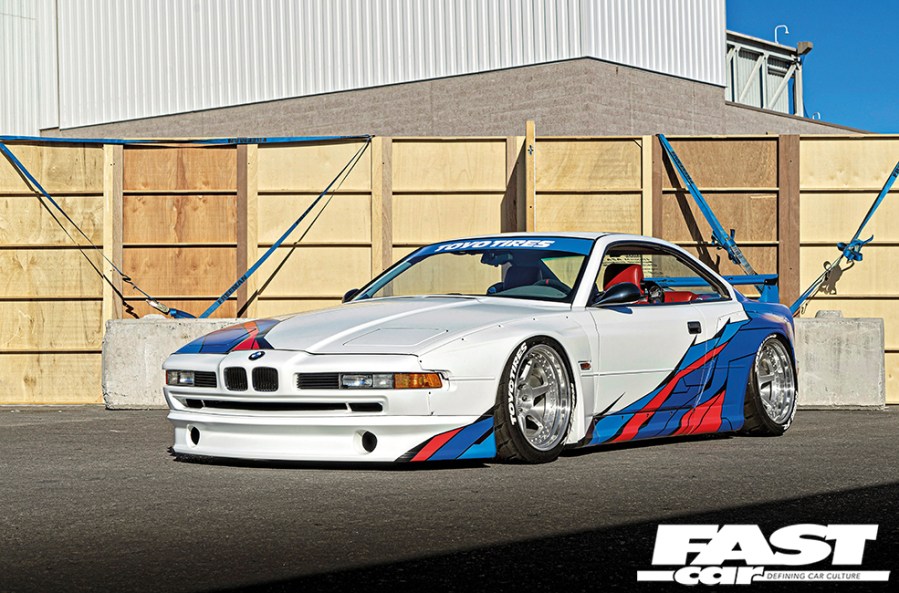 The OG BMW 8 Series is a special car; it was unquestionably ahead of its time and remains painfully cool. It’s a rare beast, though, and you’re very unlikely to see one out on the road, let alone on the modded BM scene. But when they do appear, they’re always something special, and Marv’s (@marv_gts) marvellous widebody BMW 8 series build is living proof of that.

This is, without a doubt, the wildest modified BMW 8 Series E31 build we’ve ever featured and quite possibly the wildest we’ve ever seen, and while it won’t appeal to those of a more delicate disposition, we love this build. It’s an unashamed expression of personality and individuality, and nowhere is this better represented than in that wrap that envelopes the widebody and which was designed by Marv himself. This build subverts what the BMW 8 Series was designed to be – a refined, relaxed GT, and transforms it into an outrageous machine, one that’s been made to be seen and noticed in the biggest and boldest way possible. Regardless of how you feel about this build, you have to respect Marv for going all-out and bringing his vision to life in such an eye-popping way. 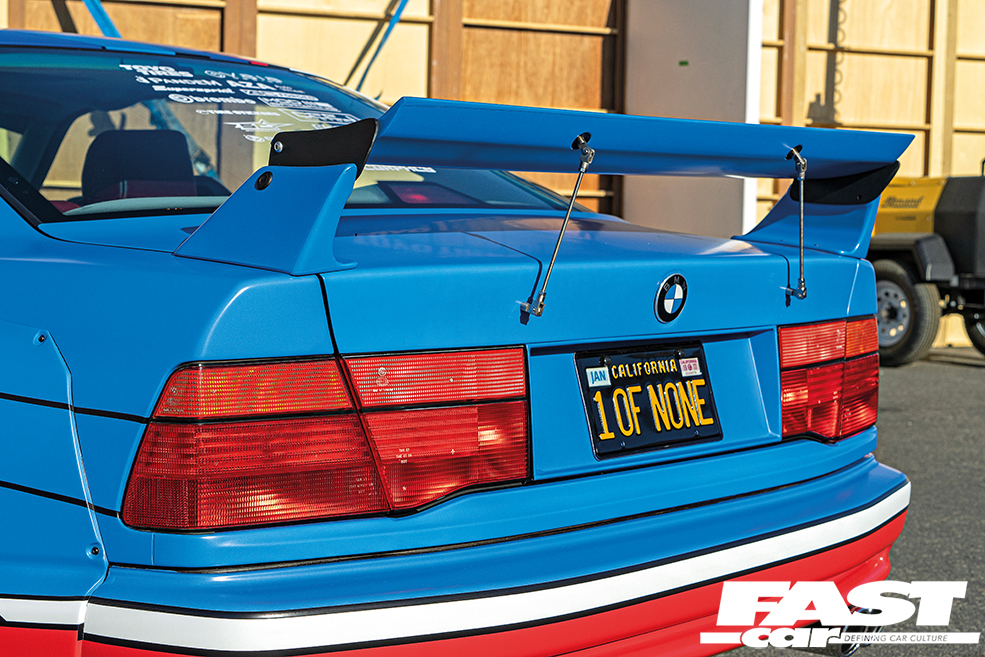 Before you start getting angry about someone doing to this an 8 Series, you can’t, because Marv owns another E31, also an 850Ci, and he’s also got an E24 635CSi, so he’s clearly a fan of old-school BMs and someone who’s as happy caring for them as he is modding them. He’s also clearly passionate about BMs, and this is a passion that manifested a long time ago. “I’ve been interested in BMW since the summer of 2003 – it was special as it defines that Ultimate Driving Machine experience,” Marv says with a smile. “I was 23 years old, and I purchased this clean 1997 E36 M3 in Alpine white, my first BMW. I immediately fell in love with the interior, the body lines and the incredibly well-balanced drive,” he enthuses, and it’s no surprise that, after that first taste, he fell for Bavaria’s best.

When it comes to modifying, that’s also something that Marv has been involved with for a long time now, ever since he was 17, and he’s built over 12 cars since he first got started. The three most recent builds were an E24 that he debuted at SEMA 2019 with the world’s first widebody kit from Coutner; a 991.2 911 Carrera GTS that was treated to a full TechArt body kit, BBS wheels and an Akrapovic exhaust; and now this 850Ci. As you can see, Marv is no stranger to full-on builds and not one to shy away from attention-grabbing creations, so it’s no surprise that his 8 Series follows that trend, and before he even bought the car, he knew exactly what the plan was. 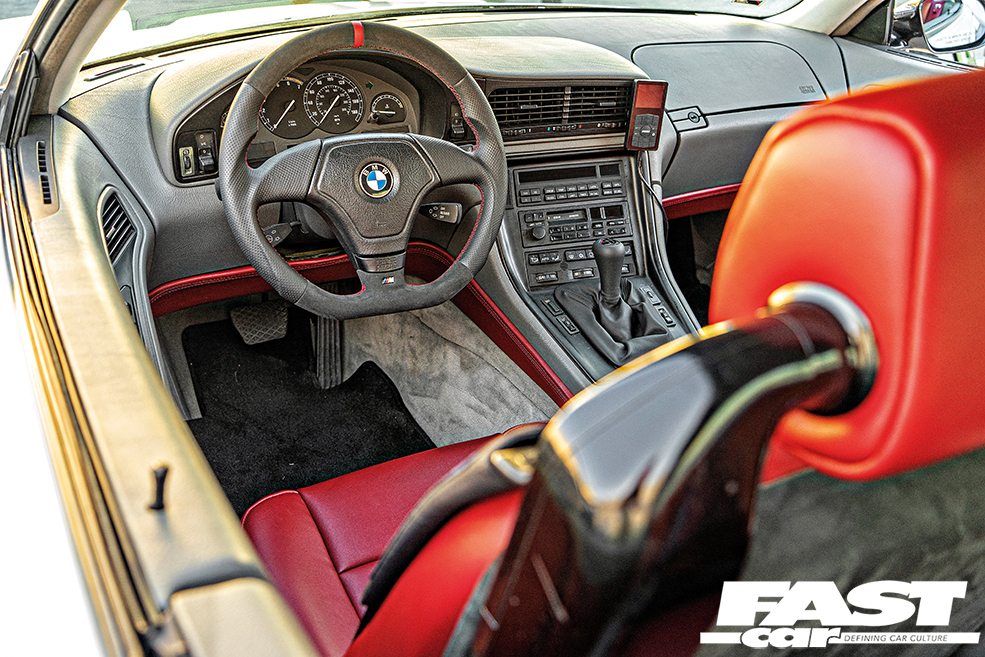 “I’ve always wanted to build an E31. There’s just so much to love about this car – the pop-up headlights, the no rigid B-pillar style, and most importantly, it’s a cruiser car which is kind of my style. I don’t race,” says Marv, and we definitely understand the appeal. “I found this car online via Auto Trader. It was a California car, but the owner recently moved to Minneapolis, MN. The car was in okay condition and drivable, but it definitely needed some TLC when I got it. My only goal at that time was to debut the Pandem widebody kit at SEMA via the Toyo Tires Treadpass. I actually had the Pandem body kit first before I bought the car!” he laughs, and we admire that dedication to a build.

Incredibly, considering the epic scale of this build, it took Marv just three months to take this E31 from stock to a SEMA show-stopper of a widebody BMW 8 Series, albeit a rather intense three months to get it show-ready in such a short space of time. The first thing that needed attention was the overall condition of the car – as Marv said, his 8 Series was not in great shape when he first got his hands on it, and so the first flurry of activity involved a lot of OEM part replacement to get the E31 healthy. With that taken care of, the fun stuff could start, and the main focus of this build was that widebody kit, the first complete Pandem widebody BMW 8 Series E31 in the world. “The exterior styling was my idea, I wanted to get that BMW Motorsport look,” explains Marv. “I collaborated with my friend in Turkey who runs EDC Graphics, and he helped me render three designs based on my idea. The one I picked truly complemented the overall design of the Pandem kit. It took us about 14 days to finalise that design, which ultimately ended with a limited collector’s pin,” he adds with a smile. 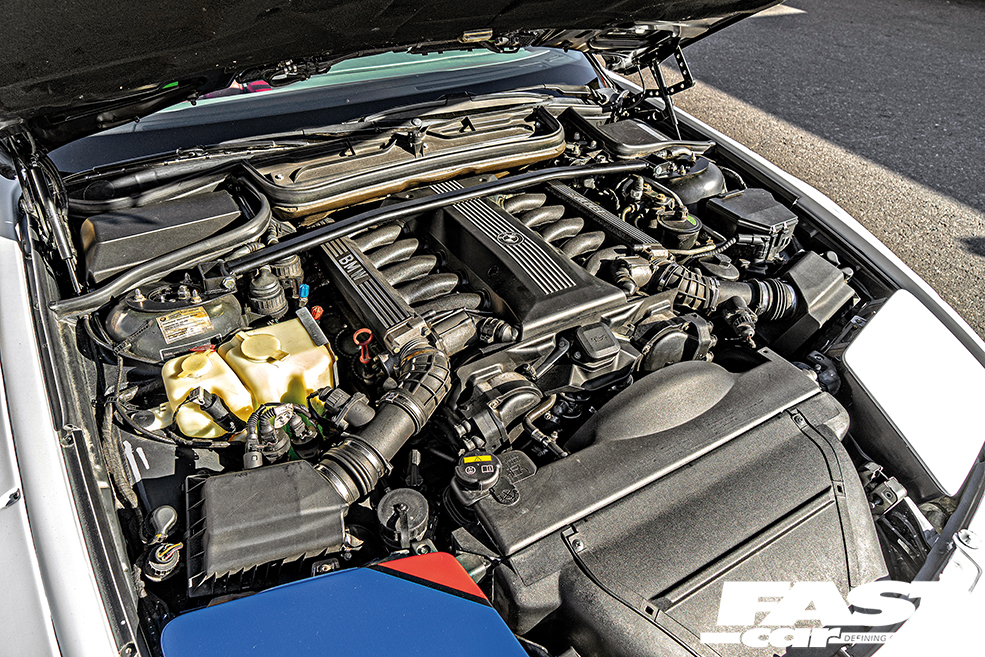 The end result is nothing short of spectacular, and this 8 Series looks absolutely awesome. The reason why this widebody design and the livery work so well together on the 8 Series is because they give it an M1 Procar look, and that’s something the E31 pulls off incredibly well. It shares a lot of design elements from the legendary M1 – the tiny kidney grilles, the placement of the front indicators and lights in the front bumper and, of course, the pop-up headlights.

Much in the same way that the BMW M1 was enhanced to muscular perfection with the addition of its bolt-on wide-arches, massive rear wing and iconic M tricolour livery in Procar form, so too is the 8 Series. That front bumper with the twin circular intakes is pure Procar, and this whole build looks like someone took that concept, modernised it, updated it, gave it a reboot, remake and refresh, and it’s simply spectacular. Those massive bolt-on arches look awesome on the E31 body, the massive wing doesn’t look out of place at all, and the actual colour scheme just goes so hard. The whole car is finished in matt white, which was an inspired decision, it allows that dynamic, vibrant M tricolour livery to really pop, and it looks unreal, it’s like a render or cartoon that’s somehow come to life. When you break it down and get into those details, you realise there’s a lot more to this kit than meets the eye, and it’s the details that make all the difference.

With the bodywork taken care of, Marv now moved on to the other areas of the car that needed enhancement, because while that widebody gets all the attention, the rest of the car had to match the level of impact, and Marv has made sure of that. First up, we’ve got the suspension, and with this being a show build and Marv being a keen cruiser, it made sense to go for maximum visual drama with air-ride. “I went with an air setup using the Grinds air management system, along with their full suspension air struts. I chose to go for an air-ride stance since it complements the look of the Pandem widebody kit,” he says, and it was definitely the right move. Aired-out, this 8 Series looks spectacular, and its visual impact is further aided by the wheels.

With both air and a widebody on board, Marv needed some truly marvellous wheels mounted to his tuned BMW 8 Series for them to be able to deliver some serious visual drama, and these really do. “I wanted a simple, clean look with either a five- or six-spoke design. I didn’t want anything fancy as I’ve always been a fan of the simple and subtle pattern,” he says, and while the design might be simple, there’s nothing subtle about these wheels. They are BC Forged MLE61 19s, and they measure an absolutely monstrous 11” across at the front and 12”-wide at the rear, and there’s no stretch on the R888Rs they’re wrapped in, just fat sidewalls, all the better to show off the custom tyre stickers, that tie-in perfectly with the motorsport vibes. Not only do the BCs have massively wide lips, but the centres are also concave, which adds even more visual drama to proceedings, and with those brushed faces, they just look unreal. 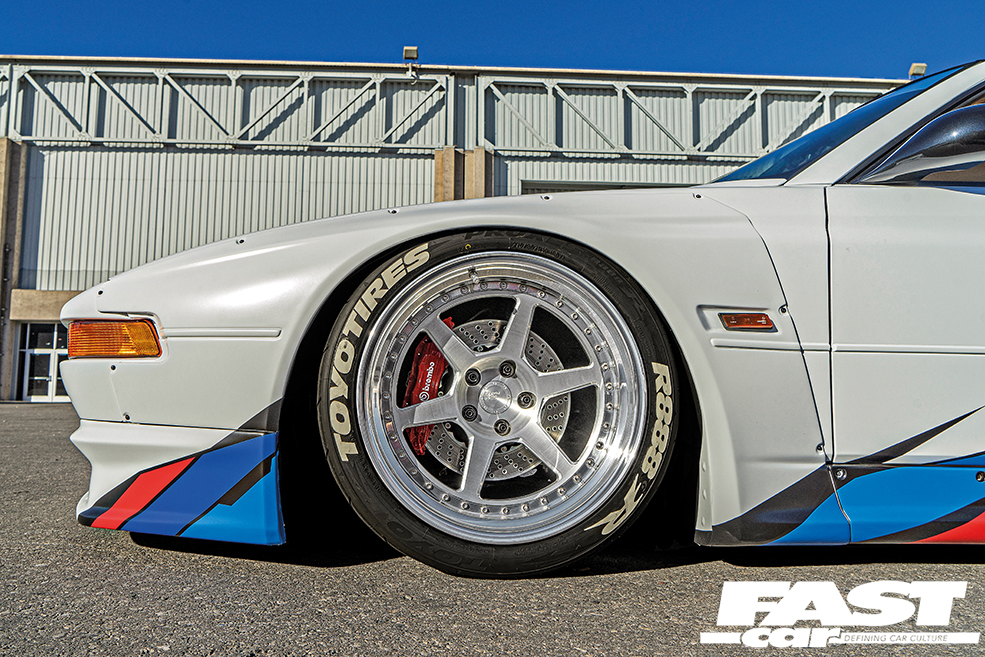 As far as the exterior was concerned at this point, Marv’s widebody BMW 8 Series was on another level, and now he turned his attention to the interior to ensure that it, too, felt special and matched the rest of this build. “Deciding what to do with the interior was an easy pick for me since I retained the OEM interior styling but reupholstered all the seats and side panels in BMW Coral red. I also upgraded the steering wheel to a more modern look and added a custom cup holder and an armrest. I was proud of this mod as I was able to innovate an E46 armrest and combined it with a Z3 cup holder, and both parts fitted perfectly like it was OEM factory!” grins Marv. Those Coral red elements, which also include the lower portions of the dash, add a serious helping of colour to the cabin, and that’s echoed by the red stitching on the steering wheel, while the seatbacks are covered in Alcantara for that luxurious finishing touch.

And now came the other finishing touches that would bring the whole build together. While there’s not a whole lot you can do with the 5.4-litre M73 V12 that lives beneath the 850Ci’s long bonnet, and Marv wasn’t interested in big power anyway, he has given it a little tweak. “There’s more than enough power to cruise comfortably. The only thing I did was to increase it a little bit by adding a Turner Motorsport Conforti performance chip, which gives an additional 29hp and 35lb ft of torque plus a higher rev limit,” he says. This has been paired with a full Supersprint exhaust system to give the V12 a more fitting soundtrack for a car that looks as dramatic as this one. Elsewhere, sitting behind the front wheels, you will find an absolutely massive Brembo GTS BBK with red calipers and two-piece discs. And the final flourish can be found in the boot, where you’ll find the custom air install. Mounted on a raised carbon platform sits a single-tank and twin-compressor setup with white hardlines and a custom paint finish that matches the bodywork, and it’s the perfect finishing touch. 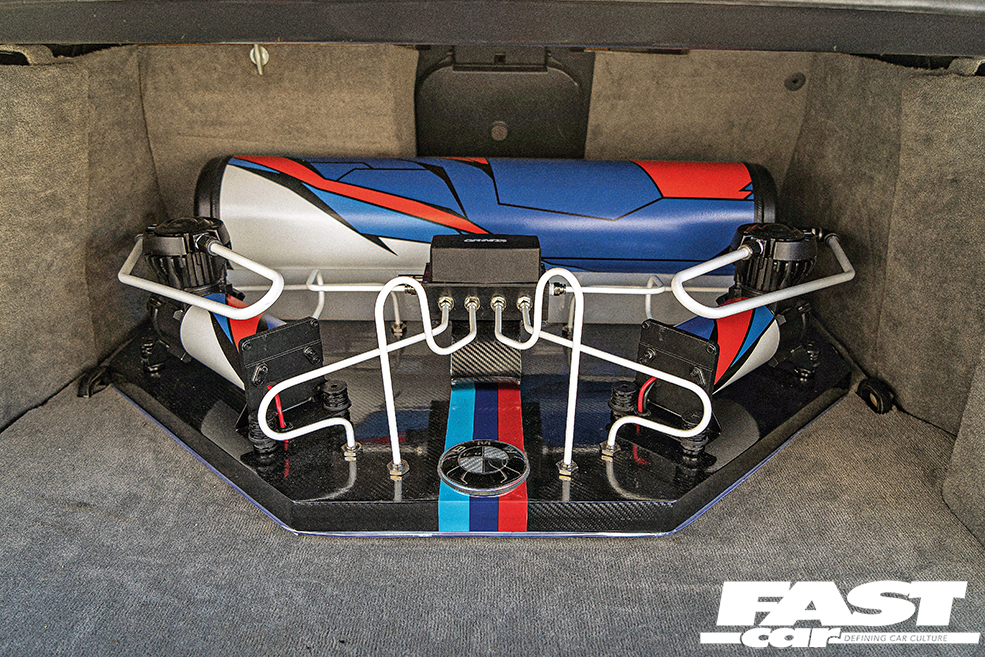 Three months might not seem like a very long time on paper, certainly not for a show build, but that doesn’t give you the full picture, and when Marv describes those three months as “excruciating,” you get a better idea of just how much work went into this 8 Series. As for his personal highlight, well, there was only ever going to be one answer there. “I think it’s obvious that the Pandem widebody kit is what stands out the most about this build,” he grins. “It was done perfectly so that it retained the BMW E31 body lines – this is definitely my favourite mod aside from wheels and air suspension,” smiles a satisfied Marv.

But while he might have been satisfied with turning every head at SEMA last year, he’s not yet completely satisfied with this build. “I plan to complete the transmission swap and maybe a motor upgrade, as well as moulding the widebody kit and eliminating the rivets,” he explains. To want to improve upon a build as stunning as this says a lot about Marv and his approach to modding, and that’s the kind of drive and ambition we live for. 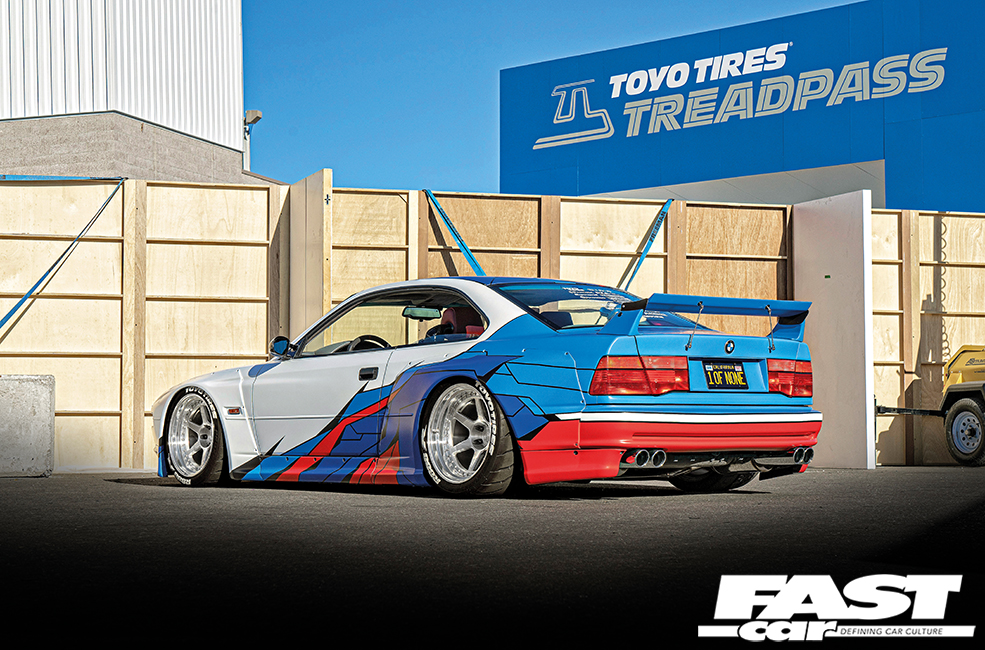