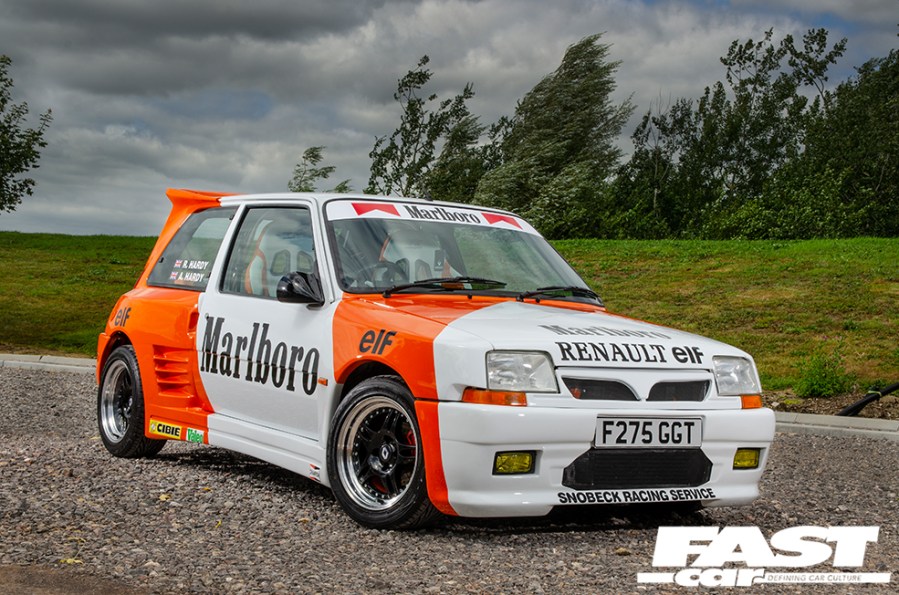 Inspired by eighties racers and the nineties scene, this tuned Renault 5 GTT is burning an eternal flame…

Lighting up is no good for your health. But the motorsport liveries created by tobacco companies? They’re lit and emblazoned on the brains of fans everywhere. Purple and white means shovel-nosed Le Mans Jaguars; blue and yellow says Colin McRae in a sideways Subaru; black and gold is Lotus single seaters. Red with white? We could only be talking Marlboro and a look that accompanied Ayrton Senna and Alain Prost to world championship glory.

That’s inspiration enough for a stand out show car, but don’t race to conclusions: Rob Hardy didn’t build his tuned Renault 5 GTT to channel mainstream motorsport. Oh no. Instead ,he’s taken inspiration from a scale model. The evocation in question harks back to a real machine that ran on the 1982 Rallye du Var. That might not mean much to some, but the driver’s name will. It was Alain Prost behind the wheel, in his first, last and only stage rallying appearance. And he was driving a Renault 5 Turbo 2. 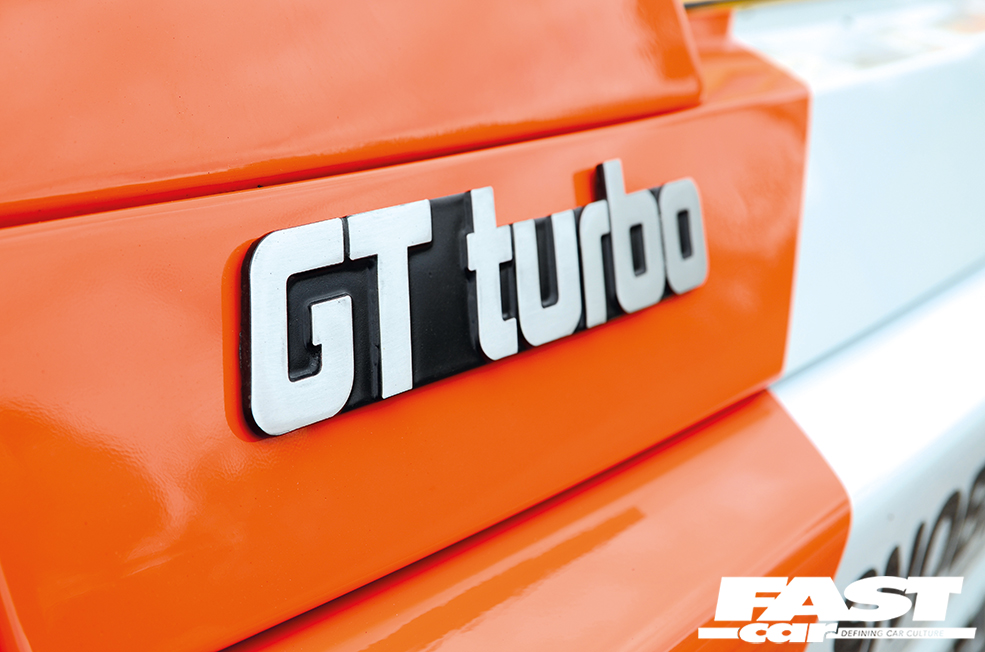 “I just fell in love with that car,” Rob confesses. “And I thought that style would look cool on a Renault of my own. If you’re going to modify something, it might as well have your mark on it.”

This isn’t the Marlboro livery as you’ve seen it before. Painted by Wayne Barnett at GT Turbo Spares, its main coat of Renault Glacier White is counterpointed not by an authentic, full bodied red but with a tangy orange. The explanation is simple: it’s Rob’s favourite colour, so it had to feature. Prominently. Flashes of orange dominate the retrimmed cabin too – and it all started with a pair of two-tone sports seats from FK Automotive. The rear bench has been retrimmed to match, gaining a custom leather look from furniture expert McKay Upholstery, while the leather doorcards were chosen for their orange stitching. Edge speakers, hooked up to a JVC Chameleon stereo, also got the nod thanks to their tangerine highlights. Contrast comes courtesy of a custom black rooflining and carpets, both measured and fitted by Rob himself. 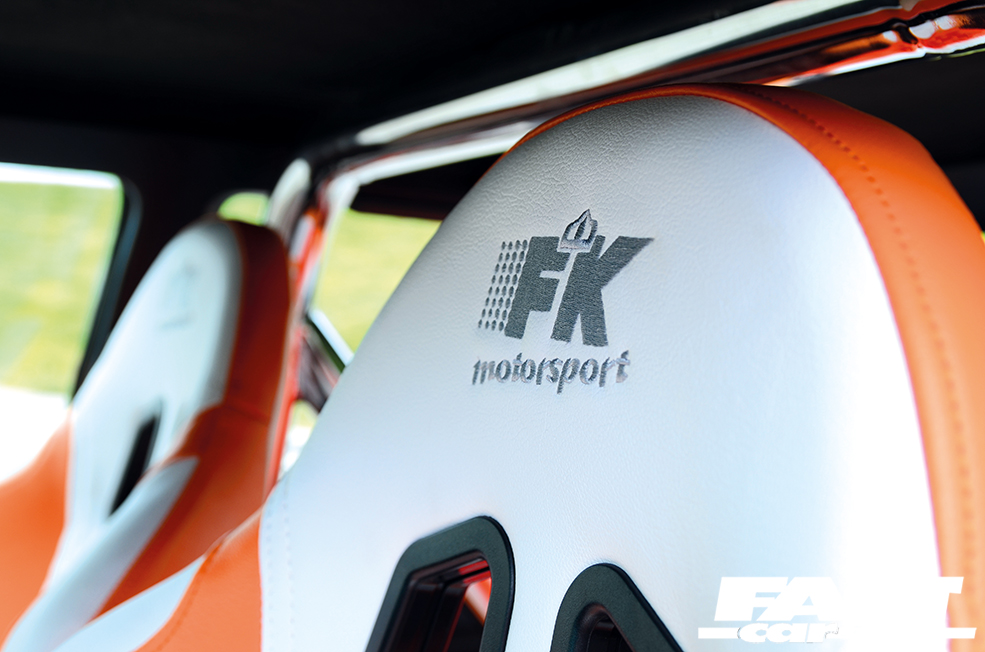 Pop the bonnet latch and the apricot assault continues, thanks to a custom painted cylinder head and a brace of orange silicone hoses. An aftermarket strut brace, finished in the same Glacier White as the exterior and tagged with a Marlboro transfer, provides a striking contrast. Speaking of stickers, the body benefits from a collection of sponsors’ decals which closely mimic those on Prost’s car. Sourced from specialist suppliers I Say Ding Dong, they’ve been placed with exacting reference to schematics of the original rally machine.

We’re getting ahead of ourselves. Before he could prime the paint guns, Rob had to source and restore the Renault that forms the basis of his build. A lifelong 5 fan, it was the third time he’d hunted for a GT Turbo. The first proved Flinstones floor rusty and the second had a junk engine, so it would be the first time he’d be able to keep the object of his affections. “I was working in Oman when I found this one on eBay,” he remembers, “it was in a scrapyard, it was going to be a track car project and I got it for the princely sum of £350. It was my 30th present to myself!” It sure beats a watch or a night on the town. 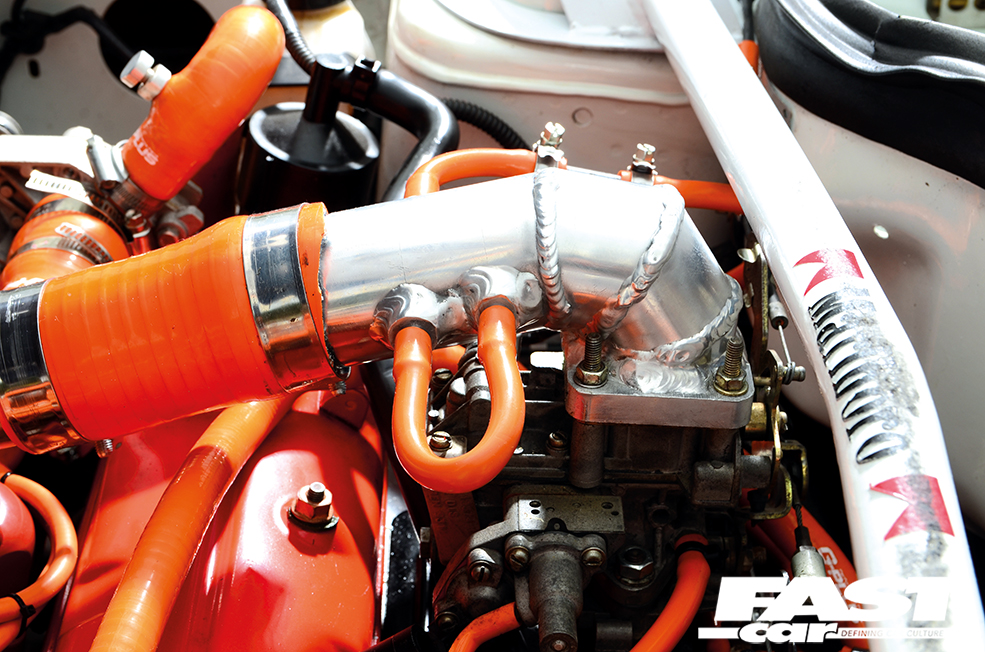 Back in Britain, the birthday boy tore straight into his new purchase. On discovering the oil and water lines were plumbed into the wrong systems, Rob treated the Renault to a full restoration. The two GT Turbo bodykits promptly hit the market, providing valuable funds, while Rob hunted down replacement parts straight from the 90s era. He hit gold, securing a front and rear bumper from a period Prima Racing kit. “I wanted to find something different,” he says, “and these make it look like a much meaner car.”

Careful searching would eventually uncover the wide wheelarches, grille inserts, side skirts and stubby wing to match, but looks weren’t the only topic on Rob’s mind. Using a range of self-taught fabrication skills, he stripped the Renault back, built a custom rotisserie to rotate the bare shell and set to work on rotten areas. Patching and parts replacement soon got the sills, rear wheel arches and floor looking like they should, allowing focus to switch to suspension and subframe rebuilds which utilise sport-focused Powerflex purple polybushes. 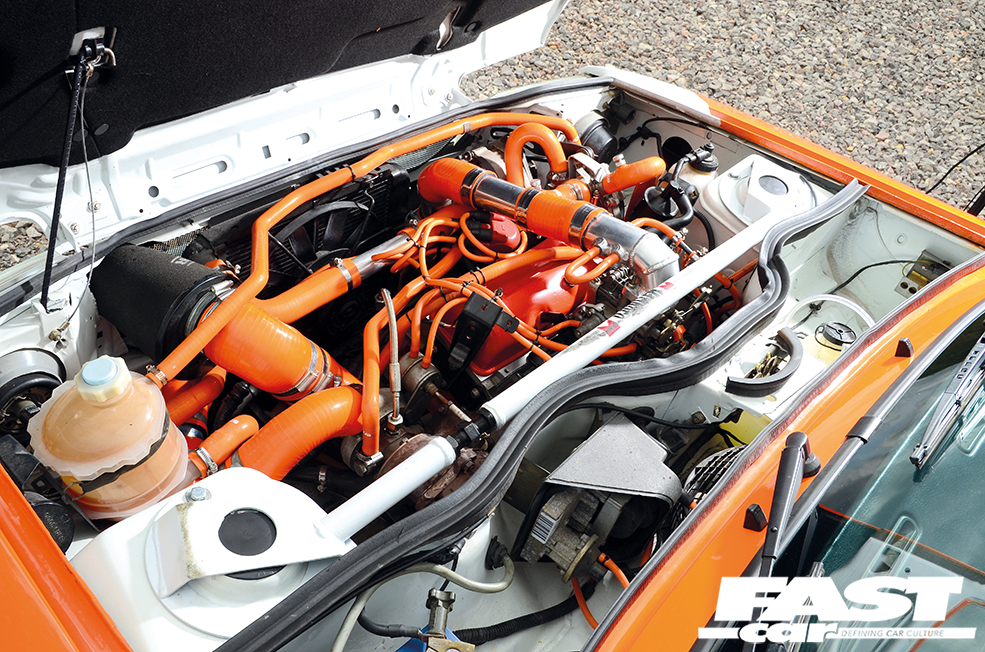 Never one to shirk a challenge, Rob now embarked on his first ever engine rebuild. Major upgrades include a Scorpion 2.5-inch exhaust system, a Garrett T25 turbocharger from AET Turbos and the front-mount intercooler from a Ford Sierra Sapphire RS Cosworth – chosen for its ability to just fit under the front beam. But the renovation process focused more on dependability than outright power. “It went step by step and nothing was too horrendous,” he says. “And my wife lovingly helped me with lapping the valves, which was one of the hardest tasks.” Rob has used new but original specification parts to replace the cylinder head, cylinder liners and pistons, creating an engine which produces around 170bhp.

A bodyshop visit came next – and there was bad news in store. “We discovered the bumpers were shot,” says Rob. “So I needed to find new ones overnight.” A 12 and a half hour race to York and back followed, Rob stumbling on a miraculous pair of Prima bumpers so fresh they were still in their original gel coat. With the kit fitted, and accessorised by a pair of DTM Cup mirrors, the tuned Renault 5 GTT could finally take on its pugnacious shape. 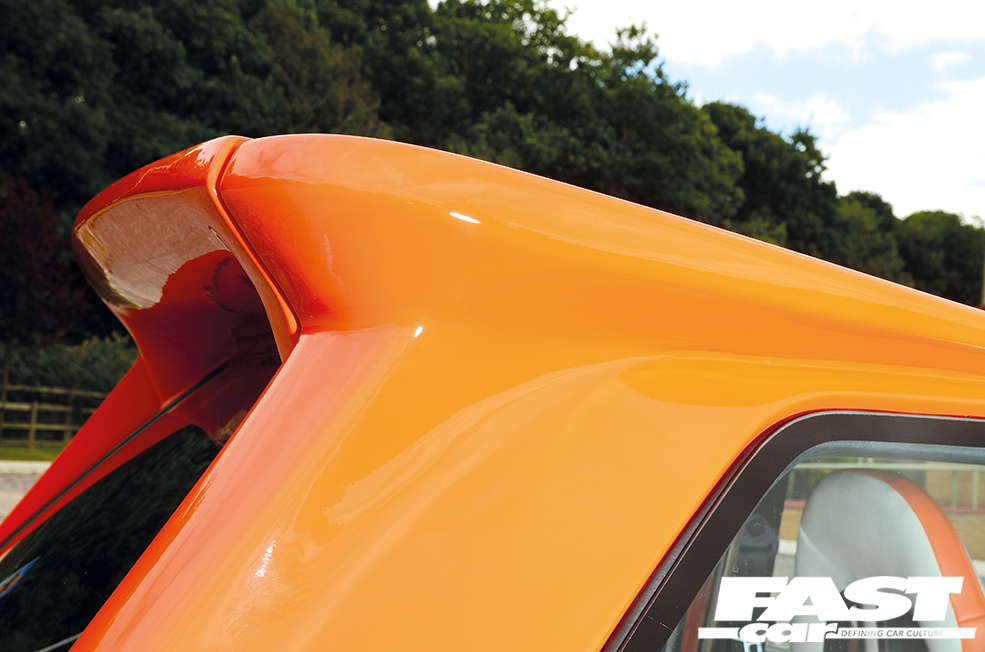 The right rims weren’t the work of an instant either. To fill out the wide Prima arches, any replacement alloys have to wear a tiny offset and measure one inch wider at the rear than the front. It’s an uncommon combination and one that’s fulfilled by a set of Image EV split rim wheels. “It was a bit of a mission,” laughs Rob. “But I eventually managed to find this used set in London.” The vital measurements are ideal: 15 inch diameter all round; 7.5 inches wide with a slim ET10 bump at the front; a neutral ET0 and 8.5 inches of width at the rear.

Vital statistics secure, Rob could turn his attentions to style. Inspired once again by the Prost rally car, he’s elected to refinish the face of each wheel in gloss black and keep the outer band in high sheen, hand-polished chrome. Peer a little closer, mind, and you’ll spy some individuality on the inside rim. The little seen surface has been powdercoated in the same citrus shade as the exterior stripes. 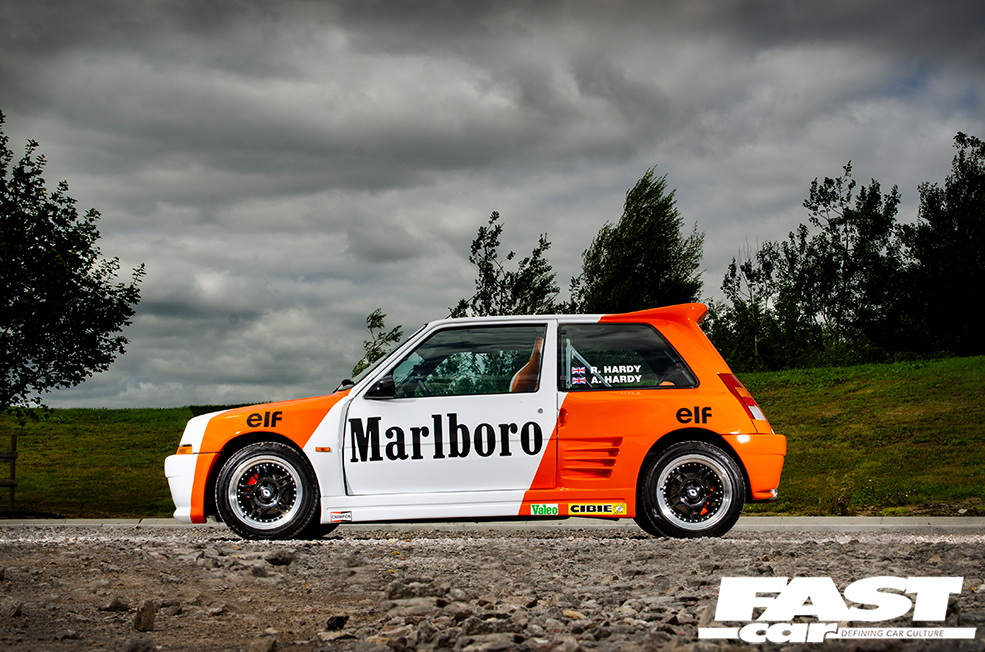 Nerve-wracking. That’s how Rob describes his first miles in his wide-arched wonder. “I knew that I’d replaced or reconstructed every single bolt,” he laughs. “And that feeling lasted for the first 500 miles.” Don’t worry, he’s still made the most of his 1397cc rager. After nothing more than a couple of round the block excursions, car and owner embarked on the eight-hour round trip to Santa Pod Raceway for Retro Show.

Wait a hot minute: the Marlboro machine isn’t burned out yet. Rob aims to focus on both ends of the car in the coming months, fitting a custom boot install and subwoofer behind the seats and a Piper 285 high lift camshaft in the engine bay. With a little finesse, the result should be earth-shaking bass and a rolling road proven 200bhp. Add those changes to the Renault’s abundant style and you’ve got a retro riot.

“It’s never being sold,” says Rob, as if we ever needed to ask. “My daughter’s got her eye on it too. Even though she’s only 11.” Three decades after it first hit the scene, the Renault 5 GTT is still smouldering. 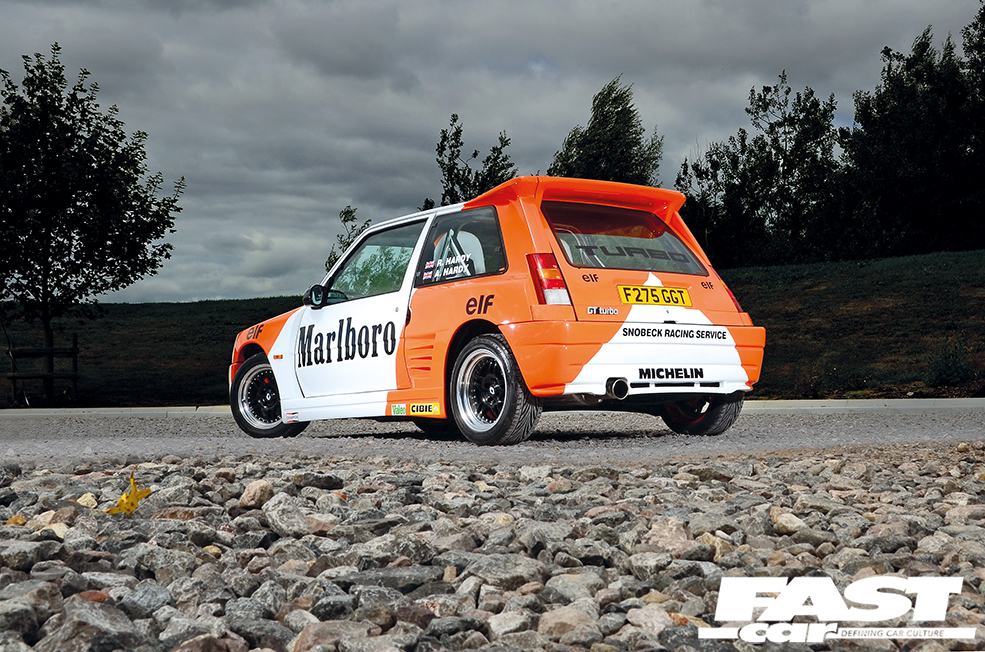