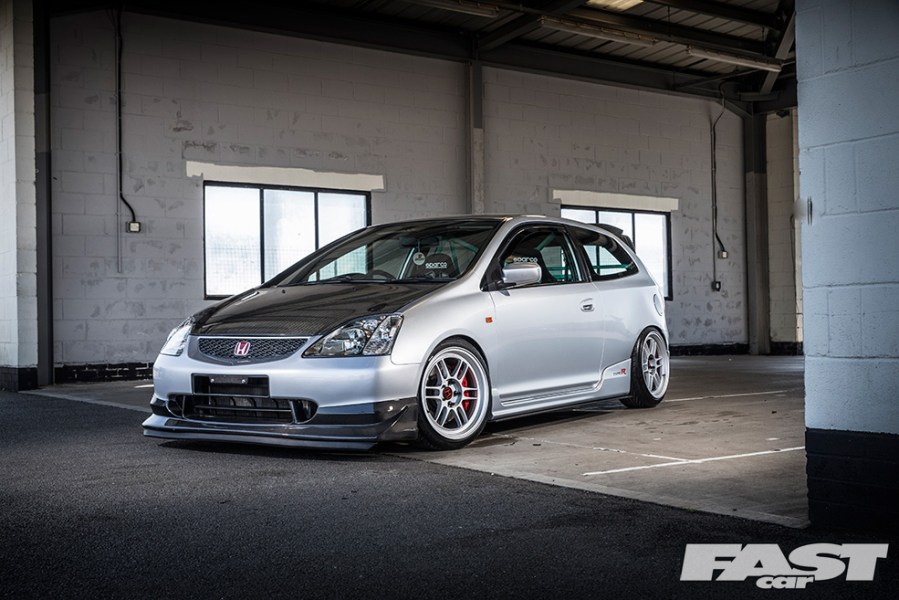 Feeling like he’d hit a wall with his tuned Honda Civic Type R EP3 project, it wasn’t until Chris Coulton’s nephew Connor jumped on board that the pair really began to make some serious progress…

Is it just us here at FC towers, or do all the important, successful people seem to be getting younger and younger these days? From Olympic athletes to chart-topping singers, it appears the world is now dominated by people roughly half the average age of that in our office (and we’re pretty certain it’s got nothing to do with us lot getting older).

Chris, the owner of this tidy tuned Honda Type R here, is one guy who’s experienced just how talented the latest generation is. After suffering from the car variant of writer’s block when modifying this silver hatch, he benefited from a fresh pair of eyes to kick-start the project once more, in the form of his talented nephew, Connor. And by working as a team, they’ve really managed to get somewhere pretty special.

Focusing on a handful of heavily modified, boosted Jap cars such as a Pulsar GTI-R and an RX-7 a few years back, Chris eventually snapped up this then-standard EP3 back in 2008 to serve him as a slightly more sensible yet still fun daily run-around. “Unlike my previous cars, the plan with this one really was just to leave it alone!” he recalls.

You probably won’t be all that surprised to hear that less than a week later, this celebrated little hatch was proudly sporting a new set of wheels, springs and an exhaust system as Chris caved into the allure of endless parts that’re available for this popular car. Over the course of the next few years, more impressive-yet-sensible bits found their way onto the Civic. It became faster and much more appealing to look at, while never becoming too extreme to stop using comfortably on a daily basis, like some of his previous builds had managed.

“I ended up losing interest in cars for a bit, to be honest,” Chris remembers, as the mods soon dried up and interest in his trusty Honda began to dwindle. “I decided to keep it though and use it as a fairly fun daily like I’d always planned.” With passion for modifying his car at an all-time low, he’d clearly need a miracle if he was ever going to rekindle the love between himself and his VTEC-powered companion. And luckily, that’s exactly what he got…

“It was when my nephew Connor got to an age where he became interested in cars, and kind of took over the project for me by doing what he wanted, that things began moving again,” Chris smiles, happy to have his teenage sidekick on board to bring an entirely new perspective to the build. One of the first things on Connor’s long to-do list was to strip the interior and add a roll cage. Not wanting to leave any rough edges, some of the trim remained while the floor itself was painted satin black. The Safety Devices cage wasn’t left untouched, either. It was sprayed up in that stunning teal colour that matched one of Connor’s Nike trainer boxes and offering a huge contrast to the silver bodywork in the process.

A metal polisher by trade, Chris had gradually filled up the car’s bay with plenty of shiny additions over the years. “The maintenance to keep it looking its best was too much even for me, though,” he admits, with the solution coming in the form of colour-matching parts like the cam cover in the same teal hue as the aforementioned cage, creating a contrasting theme throughout the ride.

To top off the racier innards, Connor’s clear visions next got him looking at some fixed-back bucket seats to keep both himself and Chris in place during their rolling adventures. Eventually settling on some super-supportive Sparcos that matched Chris’ budget, as well as touches like a Personal steering wheel and an Alcantara gear gaiter, and years were successfully knocked off this hatch’s aesthetic for the better.

To top things off (for now, at least), some focus was sent towards that K20 motor under the bonnet. Biting the bullet and deciding to do things properly, a Hondata ECU was snapped up, with Chris also purchasing an RBC inlet manifold that was adapted to fit at work. “Connor decided it should be black, so I did everything under the bonnet I could in wrinkle-effect black paint,” Chris adds, showing us another touch that Connor’s vision has helped to make look nothing short of awesome.

It was then off to Rob at TI Motorsport – one of the few people to tinker with the car aside from Chris and Connor – who had soon mapped a healthy 235bhp and 162lb/ft of torque out of the 2.0-litre lump.

“It drives totally differently now; VTEC comes in at 3,800rpm and it redlines at 8,900rpm! But mid-range is where the car is really transformed. I was never looking for huge power figures, just more driveability, and that’s what I’ve got now,” Chris grins, clearly owning a car that now goes just as well as it looks.

To bolster the electrifying ride, there’s an unsilenced HKS exhaust system complete with a Tegiwa manifold that unleashes plenty of howl, while the ride has been firmed up with some MeisterR coilovers and tonnes of bracing and camber arms for the perfect stance.

That silver exterior has since been treated to plenty of additional goodies to help signify this special beast from the rest. You’ll probably have noticed the sea of genuine carbon fibre panels that contrast the bright bodywork, for example, as well as those Japan Racing alloys that house a huge Brembo brake kit on the front two corners, all helping the overall product to look nothing short of delicious.

If you catch Chris and Connor now at one of the many events they attend together in their stunning pride and joy here, you’ll probably see rather large grins on their faces as they enjoy this Civic in the most awesome form it’s ever been in.

By feeding off each other’s passions and keeping the dream alive as a team, it just goes to show how much you can learn and benefit from those around you…