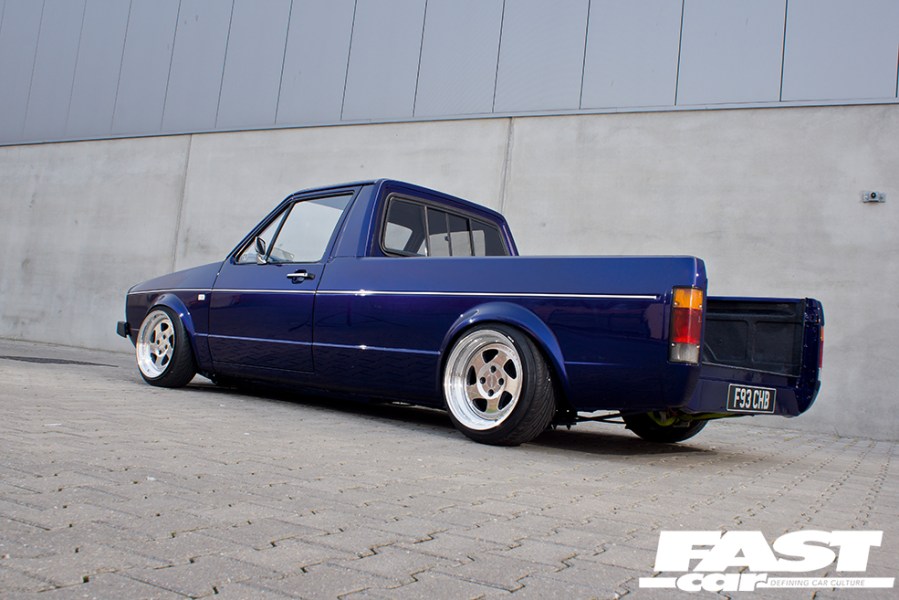 We take a look back at some of the epic features that graced the pages of our sister title Retro Cars magazine. This time it’s Frankie’s Mk1 Caddy from 2018…

It’s common to get a pang for something in life – it’s just part of human nature. And while many of these urges are so fleeting we barely have time to act on them, sometimes they stick around for a little bit longer. She might have a 3-Series BMW to perform her daily driving duties, for example, but young Frankie here has never managed to shake off her deep-rooted love for Volkswagen’s humble Mk1 Caddy. And, with the help of her boyfriend Will along the way, she’s now finally realising her longest-standing desire. And it doesn’t seem to have disappointed at all, not by a long shot.

Let’s not beat around the bush: when Frankie bought this first-generation Caddy a few years ago, its condition left a lot to be desired. Initially, the teenager began by dismantling the complete interior and starting afresh with the help of Will. Because, although this Caddy had all the parts in the right place, it’s the cabin that triggered her interest to begin with. A custom interior makes driving said car all the more exciting, according to Frankie, an attitude which saw the likes of an inspired custom-built one-piece bench eventually finding it’s way into the cockpit. It certainly does a great job of setting off that blue-leather and grey Alcantara too, a theme that’s repeated in other areas like the dash and door cards.

Even the home-made custom centre console (that cleverly houses an iPad Mini) has received a similar treatment with the soft grey material, with carefully chosen accents of blue leather acting as the crowning glory. It’s all living proof that this is a lady who knows exactly what she wants out of her latest project.

Frankie and Will didn’t stop there, they soon went totally head-first into the interior build, finishing off with touches like custom gauges and bespoke speaker housings in billet aluminium. The deep-dish Grip Royal steering wheel is finished in the same wood as the gear knob, while the dials for the air suspension fill up the empty spaces in the dashboard in a classical, yet stylish, way.

Then there’s the killer audio install. Apart from the Audison Voce mid-range speakers and tweeters (which are housed in rather magnificent aluminium trays on top of the custom dash), you don’t see much of the impressive system at first glance. Those into their car audio will distinguish rather quickly, however, that Frankie has invested big in the sound quality of her install. The iPad up front connects with an Audison Bit One interface. This leads the signal towards three amps that provide the speakers in the custom door cards, and the JL Audio subwoofer under the Cobra bench, with sufficient power.

Sadly, it wasn’t just the interior that needed attention before this Caddy would be ready to achieve Frankie’s ambitious plans of becoming a show-stopping Dub. The pair would have their work cut out when it came to tackling the rather ropey exterior too. Not to worry though, Frankie’s mind was already set on realising her dream, so they soon got to work creating a breath-taking exterior aesthetic. As the build went on, it appeared this vision revolved around smoothed body panels, chrome accessories and some seriously dropped suspension.

The front fascia now features a smoothed panel, while the freshly-chromed small bumper leaves an extremely clean look. New chrome side strips and door mirrors follow the same theme –  a distinct cohesion between shiny parts, polished Rotiform split rims and dark House of Kolor Cobalt Blue paint. Impressively, it only took four weeks to get the ageing body prepped for this amazing hue too.

During the six-month  build, Frankie didn’t waste any time on doubting which wheels would suit her Caddy best. She briefly looked at the other options, but her mind was always set on TMB five-spokes from US wheel wizard, Rotiform. The fact that these hoops blend impeccably with the Caddy is no coincidence since they were tailored to fit the pickup exactly. This means that the 15-inch puppies boast 8.25-inches of width up front and 9.25-inches out back. Unsurprisingly, several hours each week are now put aside to ensure the chrome finish is maintained to the highest possible standard.

Not as obvious are the G60 disc brakes on the front axle, but those are no unnecessary luxury. You see, the ‘89 machine has been treated to a much more modern 1.6-litre turbo diesel engine. Okay, so it’s not pretty, but it is practical. It boasts a usable 150bhp with the help of a larger intercooler and turbo-back exhaust system. With almost double the original power now running through the front wheels, a sturdy set of discs doesn’t seem like such a bad idea after all, eh?

Frankie admits that if money wasn’t an object, a huge V8 might’ve taken pride of place in the bay instead, linked with a rear-wheel drive setup. But she never takes her new engine for granted, it provides plenty of grunt and reliability to enable her to get to all of her new show-based commitments in comfort and ease.

What Frankie has proved is that you don’t need an unlimited budget to achieve your dreams, just some steely determination and a little help from those close by.

Thanks: “My boyfriend Will Smith for helping when things go wrong and all his help on the bodywork, Studio Incar for the interior, audio and air install, my friend Phil Whyman at Euro Car Parts for sourcing parts and paint but for also helping with the bodywork, Roy at Autobarn for the exhaust.”