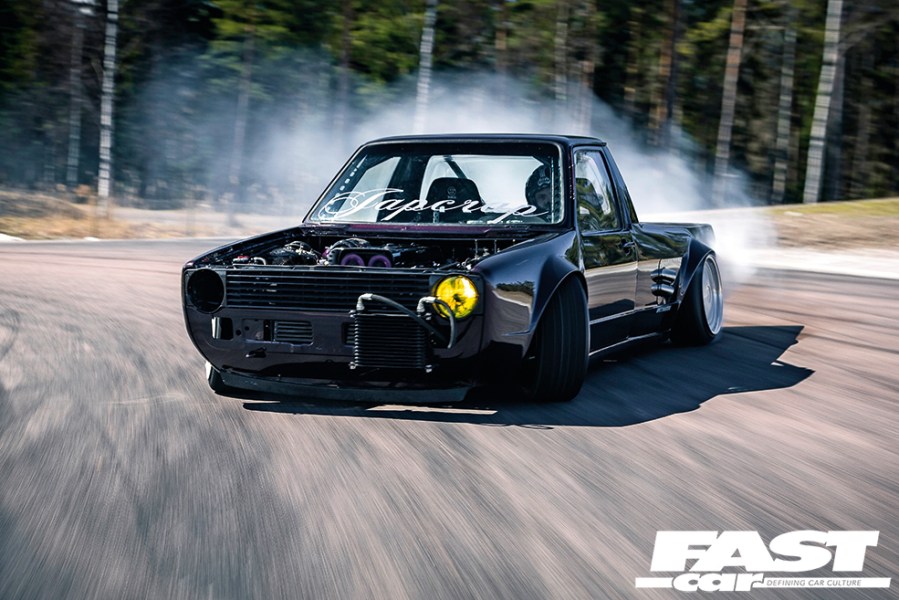 Welcome to this week’s FC Throwback, where we take a look back at some of our favourite previous feature cars. This week it’s Viktor Martensson’s 1JZ powered VW Caddy from back in 2014…

Sometimes you need to pinch yourself to check things are really happening. Sounds cheesy, but it’s completely legit. Allow us to introduce the JapCrap Bombsquad. Back in April 2013, photographer Paddy and myself flew to Sweden’s capital, Stockholm. To be honest I didn’t know what to expect… Rod, of Speedhunters fame, had set up a feature with the beautifully aggressive Volkswagen Caddy that you see here. It’s a wonderful contraption that has all been very carefully built by ingenious owner, Viktor Martensson.

Viktor and his friends embody everything I love about the automotive scene. This guy started out as a humble metal worker in Stockholm, and with the help of the JapCrap Bombsquad, has put together a vehicle that he is able to have stacks of fun with.

I’m fascinated by the pure insanity of the build. Simply down to the fact that it breaks all of the rules. This tuned VW Caddy is a perfect Euro/JDM mash-up and Viktor has also managed to combine many elements of various scenes to create a car that everyone seems to be talking about. It’s all-encompassing. This vehicle represents the Euro, drift, JDM and stance movement all in one big hit. It’s a German car that’s been created by a clever Swedish guy using Japanese power. Nice.

From the outside it may look like a pretty bonkers Volkswagen Caddy with a side-exit exhaust. But actually, there’s a whole other complete car involved in the build, as well a load of fabrication work. Rather than just fit the engine from a Soarer, Viktor completely re-engineered the whole body. The front end is pretty much all Soarer with the Caddy panels cleverly disguising the happenings from this dead-side shot. The rear sub-frame is all Soarer too.

The front of the Caddy almost has a personality; a kind of mad, one-eyed face that shouts, “I’m gonna physically harm you if you don’t get out of my way!” And Viktor’s not afraid to push his latest creation as these awesome photos taken by Paddy at the incredible Gröndal Eskilstuna Motorsport Arena show.

To make the Caddy more track compliant, Viktor has made some changes. The external wastegate used to sing its battle cry via a wild screamer pipe that looked similar to the handbrake and gear shifters used inside the car. This screamer pipe exited straight up out of the engine bay and looked crazy, but also sounded pretty violent, too. Violent in a good way, that is… unless, of course, you’re a racetrack scrutineer with a dB meter. With noise reduction being the name of the game, Viktor has re-engineered his Caddy’s turbo’s wastegate system. Despite this though, the motor still sounds very tough indeed.

It’s a deliciously smooth straight-six sound that the 1JZ turbo lump serves up. A sound that is completely unexpected. It’s not something you associate with a VW and certainly not a little Caddy truck. The smooth engine note is complemented by the equally slick rolling stock that this vehicle sits on.

As you can imagine the swap was not at all easy. Viktor actually had the Caddy sat around in his workshop for four or five years, but didn’t ever start the project. Then a turbocharged ’91 Soarer packing the all-important 1JZ motor came into his possession and 12-months of seriously hard work commenced.

The front end of the Soarer has been expertly grafted onto the Volkswagen Caddy. Soarer suspension parts have been used throughout and that includes the 5×114.3 hubs allowing for more interesting wheel fitment than the usual 4×100 Caddy offerings.

Some parts have been specifically sourced for the build, like this Tial wastegate, whilst other parts have been gained from other builds or sourced at a bargain price. I’m really into this hunter-gatherer ethos and the result is a machine that commands respect. It’s clear that someone who is resourceful, as well as inventive, has built this epic truck.

Forcing air into the motor is the GT35 turbo; the sound is absolutely incredible. The fuel consumption is pretty insane too… with the turbocharger allowing the 1JZ motor to eat 10 gallons of fuel in less than 120 miles when being used to its full potential!

The dash installation, wiring and cool little touches inside the Caddy are all Viktor’s own handiwork and an expression of his personality. I for one really like it when people inject some of their personality into a build rather than simply installing ‘must-have’ parts in an effort to tick boxes.

This car has been built for the driver. Everything is exactly where it should be. Sit in the hot seat and you can easily access the well positioned gear shifter and the hydro-handbrake. Despite the Caddy having the looks of a stance car, this is very much a driving machine.

The top of the S13 dash pod more than hints at the seriousness of the pedal box conversion that Viktor carried out himself.

OBP, or Optimum Balance Products as they’re also known, have been used to ensure that the Caddy is even further focused towards the driver. Viktor used to be into Moto X racing, and despite it only being his second time driving the Caddy, out on track it was very apparent that he’s a natural drifter.

A further view of the interior shows that this is very much a function over form affair. It’s totally in keeping with the rest of the build and hits home how angry this car is. In fact, it’s beyond angry. It’s super mad!

On the day of the shoot Viktor’s Caddy put a massive smile on the face of everyone who saw it and you can’t help but admire his ingenious approach to the build. This isn’t a big-money build. Quite the opposite – it’s very much a blood and sweat type of affair. Viktor and the JapCrap Bombsquad are bringing together the best of many different car cultures and are also having loads of fun in the cars that they build together. And that is, without a doubt, what it’s all about.