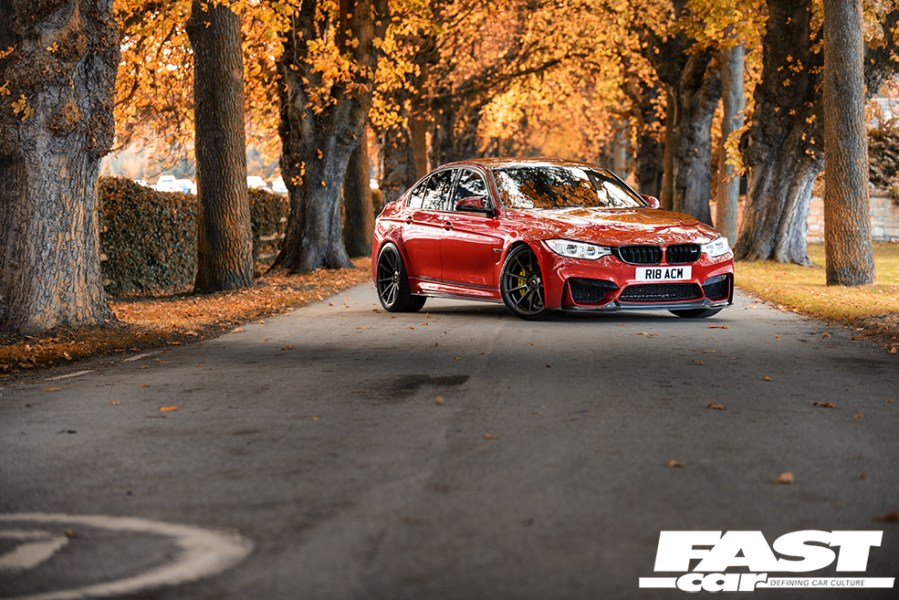 Finished in dazzling Sakhir orange, clad in carbon fibre and boasting 575bhp, this fabulous F80 M3 is a four-door thrill.

It feels, to us at least, that the F8x M3 and M4 have only been around for five minutes, though it’s been a lot longer than that. In the few years that have passed since they hit our roads they have become firm favourites among both those looking for a high performance machine and those looking to modify a high performance machine, and if you happen to own either an M3 or M4 then you are absolutely spoilt for choice when it comes to modifying, so it would be rude not to, right?

Anand Chouhan certainly thought so, which is why when he got his hands on his delicious Sakhir orange F80 M3 he knew he was going to make it his own and he’s most definitely done that. While young Anand’s business interests may be strictly retro, being as he is the owner and director of a vintage fashion retailer, his choice of BMWs (because an F80 M3 alone just wasn’t enough to quench the BMW fires burning within him so he also bought an F10 M5) are decidedly modern and that love for Bavarian metal stems from a life spent growing up around the blue and white propeller. “Ever since I was young my father has always been buying BMWs so it is kind of in my blood,” muses the dapper young gentleman. “I am simply addicted to the German craftsmanship and the look and stance of all of the M models. In particular what attracts me to BMW is its culture and the owner culture that is built around the marque. I have met and have had some great adventures with like-minded people who own similar cars and it is always enjoyable!” And that’s it, isn’t it? It’s as much about the scene, the people, the friends, the camaraderie as it is about the actual cars we own, but of course they’re kind of central to the whole experience and for Anand it all kicked off with what became a mildly modified E92 335i. “I had adored E92 M3s as long as I could remember and this was the closest I could get to one and it was incredible,” he beams. “I spec’d it from factory and it is still one of the greatest cars I have owned to date.” Great, yes, but not M3 great and that meant there could be only one, inevitable outcome…

“As soon as the new M3 and M4 were announced I fell in love,” grins Anand. “It was a tough choice between the F82 M4 and the F80 M3 however the added practicality as well as the extra flare on the F80 arches made it the outstanding winner in my eyes. I was particularly drawn to the orange colour for its chameleon-like properties where it changes colour in different lights and it is a very underrated colour.” So, an order was placed for a Sakhir orange F80 M3 and, having signed on the dotted line, all that was left to do was for Anand to patiently wait and formulate his future plans. “I wanted to mod the car for sure but how exactly, I didn’t really know,” he muses. “I purchased the M3 in 2015 and aftermarket parts were scarce at this point. I was visiting Florida on business, where I made a quick trip to a tuning shop called Precision Sport Industries and they had an F82 M4 in Sakhir orange, which was one of the first to be tuned with new wheels, suspension and aftermarket aero. It was one of my biggest inspirations for the car that you see today” and that car is just straight-up sexy and no mistake.

The F80 M3 is a seriously beefy-looking machine straight out of the box; it’s a car that means business, and Anand’s built on that natural muscularity, enhancing the already aggressive styling and taking things to the next level. Sakhir orange was such a good choice, not only because it’s such a gorgeous, rich colour that plays with the light, moving from orange to red, but also because it offers such a great contrast to the black and carbon styling parts. Case in point, up front we’ve got that Vorsteiner GTS carbon splitter that hugs the contours of the bumper and gives the M3 an even more menacing appearance, and it’s matched by a GTS diffuser at the rear, which looks spectacular and ultra-aggressive, and these carbon elements stand out so well against that rich paint, it’s really the perfect pairing. Continuing the carbon theme is the Mode Carbon boot spoiler and those 3DDesign side skirts while further black additions include the gloss kidney grilles, side vent strips and front bumper intake elements. Comparing this car to a standard M3 it’s shocking just how big a difference all these changes have made, they’ve completely transformed it.

The wheels might not be carbon but, considering how much carbon Anand has added to his car, it surely can’t be coincidence that the hue he’s chosen his Vorsteiner V-FF102s in is called Carbon Graphite? “Vorsteiner had been a brand I had always loved before I even had the car and I wanted a very motorsport-style wheel” he says. “I didn’t want the weight of regular cast wheels and I couldn’t at the time justify the price for forged wheels. Vorsteiner offers a middle ground with its Flow-Formed wheels, which is where I fell in love with the VFF102.” The finish on the 20s is stunning and the slim ten-spoke design really suits the M3’s shape and absolutely achieves that motorsport look that Anand was aiming for. The ride height, too, is pretty much perfection, and once again looking at this M3 makes you realise just how high the standard car sits, though achieving just the right amount of drop took a little bit of work. “I first started with H&R Sports Springs,” Anand explains, “however these turned out to be too bouncy and simply too low to be practical. In addition to this, once I’d purchased my new wheels, I would experience some slight rubbing on the rear and I wanted to avoid this, so I changed to the KW Height Adjustable Spring Kit. This allowed me to dial-in the exact height I needed for the car to make sure I wasn’t catching on every speed bump I came across. It is a still difficult from time to time, but it is now much more manageable,” he says and what are lows without a little bit of sacrifice? Of course the best thing about the KW kit is that only does Anand have the flexibility of being able to tweak his ride height should he choose, it also allows him to retain the M3’s adjustable damping.

The interior, Anand says, is largely as it was when his car left the factory but that’s not to say that it’s been left completely untouched. The standard steering wheel has been replaced with a much nicer BMW M Performance item finished in Alcantara and he has added a pair of absolutely gorgeous Eventuri carbon Kevlar seat backs, which feature a stunning cross-weave of black carbon fibre and Sakhir orange Kevlar. “Very recently I upgraded the sound system in the car to a Bavsound setup; it’s an aftermarket plug and play system that uses the factory head unit and amp,” he says. “I went for the Stage One upgrade, which replaces the 14 speakers, and I also added the underseat subwoofers. The upgrade in sound for the price is incredible. I do not know how I have lived without this system for so long!”

So far we’ve examined what Anand’s done to make his M3 look good, but he’s actually put even more effort into making it go better than it did from the factory, and bear in mind that even standard this is not a slow car. The first thing that strikes you when you pop the bonnet is that engine cover, finished in the same combo of carbon and body colour-matched Kevlar as the seat backs, and finished off with Anand’s IG name. Then you’ll most likely spot the twin Eventuri carbon intakes, which not only enhance the sound of the S55 straight-six, but also seriously enhance performance as well. The stock charge pipes, known to crack once you start turning up the wick, have been replaced with uprated Evolution Racewerks items, and the fact that these have been anodised black is the icing on the cake.

While admiring the exterior shots you would have no doubt spotted the carbon-clad Akrapovic quad tips and Anand has well and truly pushed the boat way, way out on the exhaust front with this incredible system. “It’s a full Akrapovic Evolution Titanium Line exhaust with downpipes,” he says. “It cost around £6100 and it was a tough buy for such a hefty price tag however, in my opinion, it was simply the best-sounding exhaust and still nothing compares. It is very difficult to capture on video but in person it is second to none. The titanium on the exhaust turns a lovely blue after some wear and is a sight to behold,” and he’s not wrong. “One of the best (and cheapest) ways to tune the car was to buy a piggyback module,” he continues. “The JB4 is one of the best and is highly customisable, which is why it was a great choice. It also has some useful features such as map changing on the fly and exhaust valve control which comes in handy very often. This brought the car up to 520hp with my intake and Akrapovic downpipes. This was the norm for most people and is still the height most people aim to reach,” but Anand had set his sights that little bit higher for his M3… When the Competition Pack and M4 GTS were released they brought with them an almighty increase in exhaust cacophony, with all manor of thunder cracks emanating from the pipes, and Anand wanted a piece of that action. “Aftermarket tuners jumped straight on this and started offering ECU tuning which enabled this sound using the ignition timing. I decided to stack my JB4 with this tune to run even higher boost and enable that epic noise and I am now running 575hp with all of the engine mods.” 575hp. That’s straight-up outrageous and it takes this M3 to a whole other level as far as performance is concerned, which is quite an achievement considering just how quick the standard car is.

It’s taken Anand two years to get his M3 to this level but judging by his love for the car it’s been worth every moment and every penny. He’s built a spectacular-looking machine that’s on a completely different level to the standard car and he’s got the power to go with those super-aggressive looks and then some. Anand’s not finished with it yet, though, and despite his love for Sakhir orange he is looking to wrap it in a different colour as well as changing the wheels and fitting a new front splitter, and we can’t imagine he’s going to stop there…