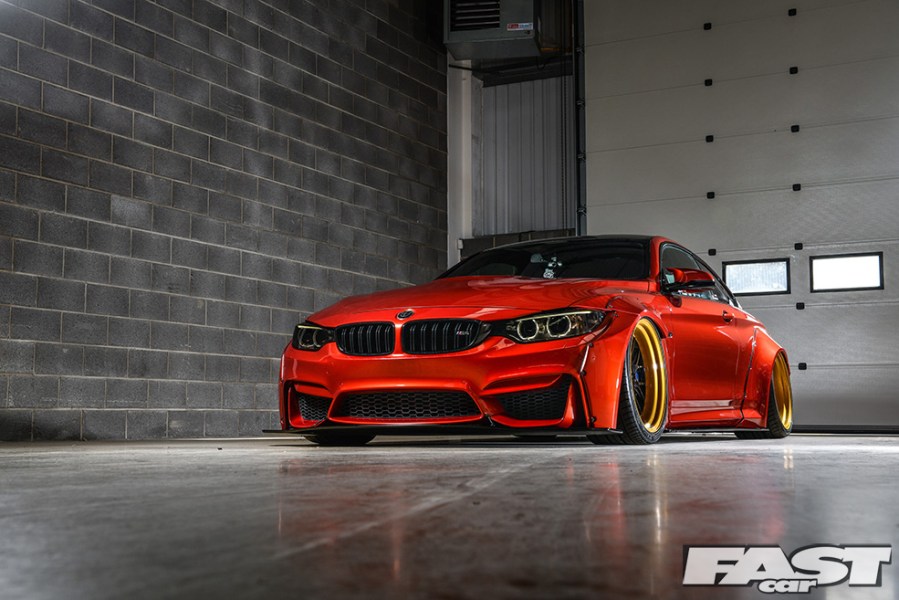 Outrageous cars like this Liberty Walk BMW M4 are enough to make your grandpa’s monocle fall out in disbelief, but building this stuff is actually not so much a rebellion as a biological imperative. We need mad behavior like this; it’s what pushes mankind forward…

“It’s a massive ballache to drive.” A strong opener there from Andrew Britton, as he climbs out of his extravagantly bootylicious M4. But the fact that he’s saying this with a huge grin on his face tells you all you need to know about human nature in the twenty-first century. We don’t like to make things easy for ourselves.

Consider the fundamental psychology of mankind. Primitive humans lived in caves, munching on freshly wounded furry mammals, and basically only had four things to fill their days – the so-called ‘four Fs’: feeding, fighting, fleeing and, er, mating. To survive, we needed to find things to eat. We needed to fend off any creatures that wanted to eat us, or had come to take our food away. We needed to be able to run like billy-o from things that we weren’t strong enough to fight off. And we needed to procreate, to perpetuate the species. That was basically it, that was all mankind had to do.

Fast-forward a few generations, however, and we’re all glued to these clever handheld devices that allow us to send suggestive messages to strangers, while people on small motorised horses bring greasy food to our houses as we watch weird picture shows on the magic screens in our living rooms, about people we don’t know trying to survive a primitive cave-dwelling lifestyle in some far-flung jungle. We’re weird, aren’t we?

So, for the sake of a simple life, Andrew could have just bought himself a BMW M4 and enjoyed it for what it was. That would have been the logical thing for a modern human to do. Or he could have just kept the Mercedes CLA he had before that. But the species hasn’t evolved through the things that we merely could have done. That’s why people flew to the moon back in the 1960s, instead of simply speculating that it might be possible. It’s one thing to theorise, it’s quite another to act. So in his own unique modifying microcosm, Andrew is effectively changing the future. That’s pretty cool, isn’t it?

This is all hard-wired into Andrew’s DNA of course, he really doesn’t have any means to change the course of this destiny. “I’ve always owned modified cars,” he explains. “Unfortunately, I just can’t leave them alone!” We’d suggest that this is an overly modest use of the adverb ‘unfortunately’, as it’s worked out rather well for the rest of us. We like having pretty things like this to look at. And Andrew clearly has a good eye for this stuff too, doesn’t he?

“Last year I had a Mercedes CLA on air-ride,” he continues, “and I loved having a full-on show car, as everything I’d owned before that had been built on a rather tighter budget.”

So if he loved it, why change? Well, it’s that age-old issue of fronting to your mates, when you boil the act down to its very essence; that, and the ingrained necessity to keep changing things for the sake of change. An easy life is the preserve of the sucker.

“I was actually driving home from work one day with a mate, and I happened to mention that I was getting a bit bored of the CLA,” Andrew recalls. “He started googling a few cars, and at that moment a BMW M4 flew past us at about 100mph, and we just looked at each other…” A proper lightbulb moment there, and it was with some certain sense of Darwinian inevitability that the evolutionary shift of this project saw these Merc-dwellers scampering to the nearest BMW dealership. “I walked into the dealer in Coventry and found myself driving out in this M4 the same day – I just fell in love with the colour,” he reasons, and you can’t really argue with the logic of that. This whole peculiar hobby of ours is driven by passion and irrational desire, there’s nothing to be gained by trying to rationalise it. Follow your heart, see what happens.

“It was completely stock when I bought it,” he goes on, “but I knew from the start that I’d be putting it on air. I couldn’t stand the arch gap and I dislike coilovers, so I took the car to Luke at Plush – as he always works on my cars – and we took it from there. I drove it around for about a month with the new air-ride and, roundabout the time I was on my ninth set of wheels in a year, my mate sent me a picture of a Liberty Walk M4 and said ‘I dare you’…”

Well, that was like a red rag to a particularly shouty bull, as you can imagine. You can’t back down when someone confronts you with a dare, can you? Particularly when said dare would ultimately result in you shooting out hot rainbows of automotive awesomeness from every conceivable orifice. So the game was afoot.

“My initial reaction was that it was just too much money to contemplate, but my mate knows I’m rubbish with money, and after some digging from the missus I ended up ordering the kit,” he laughs. “The arches were a pain, but I’m terrible with cars so the whole car was actually built and resprayed by DPM Autobody down near Brighton. Then I needed wheels and tyres, which was another pain, but a friend recommended 3SDM and they did me a great deal on these 3.01 split-rims – with some nice CNC Liberty Walk logos thrown in for free!

I did manage to change the steering wheel myself, although it took me nearly six hours and BMW reckon it should take one-and-a-half hours – so I’ve decided that I’m useless with cars. I also decided the standard exhaust was too quiet, so I had a custom straight-through system built… and now it’s so loud, I can only start it after 9am where I live!”

Not the ideal car for the nine-to-five commute, then – unless he’s allowed to rock up late every day. And Andrew readily admits that driving the M4 can be a bit stressful nowadays; it doesn’t fit in multi-storey car parks, or indeed any standard parking space. Basically pointless as a car, then? No, not a bit of it. It all just feeds into that ingrained human need for complexity and relentlessly serpentine distractions. “I just love the looks on people’s faces when they’re taking pictures of the car on motorways,” he assures us, with a mischievous grin. “And I’m planning to rip out the seats and fit a rollcage, and get a hardline setup built, and probably change it all to a different colour, and of course get some new wheels…”

Never simple, is it? But that’s hardly Andrew’s fault. As a species, we’re conditioned to make things needlessly complicated for ourselves. By creating this outstanding, unique, astonishing M4, this modern human is merely fulfilling his own predestined sense of purpose. Find fault with that logic, we dare you.

Thanks:
“Plush Automotive, YDS Automotive, DPM Autobody, The Performance Company, 3SDM, ColourKraft, my missus, and Steve for sourcing the kit. Oh, and Dean for daring me to do it!”