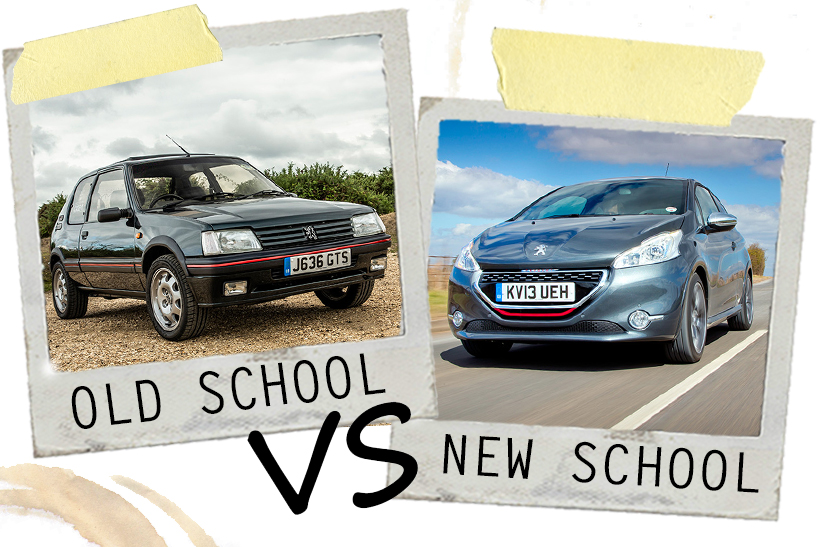 Welcome to Old School vs New School, the series where we pick out the cars from the good old days, and pair them with their spiritual successors. Last week we pitted the MK3 VW Golf VR6 takes on the Mk7 VW Golf R. This week it’s the Peugeot 205 GTi 1.9 vs Peugeot 208 GTi

THEN: PEUGEOT 205 GTI 1.9
It’s amazing that 205 GTIs are commanding such silly money these days, as back in the 1980s and ’90s these things were everywhere – proper affordable pocket-rocket lunacy. We’ve had quite a few of them ourselves over the years.

OK, 130bhp may not sound a huge amount in a modern context, but you have to remember that the 205 weighed about as much as a packet of fags and a pint of mild. It also had a magical chassis that liked to cock a rear wheel through the corners, a lovely little gearbox, and – most importantly of all – red carpets.

Because it was the eighties, and stuff needed to be red back then. Back when Fast Car was starting out, everyone had these, it was the benchmark that all modded hot hatches were built to.

Oh, and don’t be put off by all the low-mileage concours GTIs that are going through the auction houses for £40k+ these days – it is still just about possible to buy a decent runner for around £5k. If you’re quick.

NOW: PEUGEOT 208 GTI
Peugeot used to rule the hot hatch roost, but that’s not really been true in recent years. The 206 GTI was a bit wishy-washy when it came out (although the firm responded to criticisms and re-released it with quite a lot more power as the GTI 180, which helped a bit), and the 207 GTI was downright disappointing.

But thankfully the 208 GTI has done a lot to rekindle the magic of the 1980s classic – sure, it could never replicate the super-lightweight thrills of the 205, as modern cars have to have airbags and crumple-zones and stuff, but it’s a perky little thing with great handling and a well-judged amount of performance.

Early used ones have dipped well below £10k now and the tuning potential is huge.

If you had a 205 GTI back in the day, and now you’ve grown up and raised a family and don’t fancy ferrying your nippers about in something that would immediately dissolve in an accident, the 208 is the modern equivalent. It’s got a turbo and an LSD too. The 205 certainly didn’t have that!