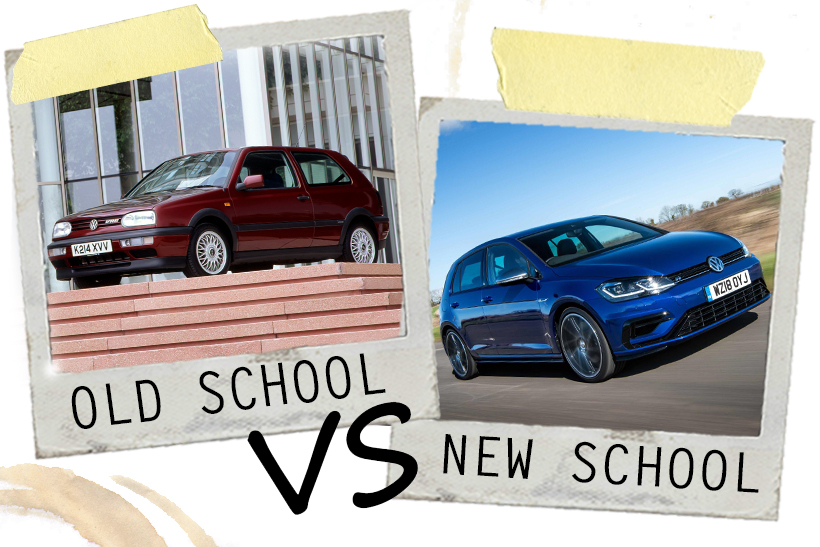 Welcome to Old School vs New School, the series where we pick out the cars from the good old days, and pair them with their spiritual successors. Last week we pitted the Nissan Skyline R32 GT-R against the R35 GT-R. This week it’s the battle of Ze Germans, as the MK3 VW Golf VR6 takes on the Mk7 VW Golf R…

THEN: VOLKSWAGEN MK3 GOLF VR6
The Mk3 Golf is in a real sweet spot right now. In period, when the GTI arrived, the hardcore purists who were in love with the Mk1 and Mk2 GTIs derided it as lardy and uninvolving, and it suffered from that reputation for years; nowadays the market for Mk3 Golfs is pretty buoyant as there aren’t too many left.

Of course, there was a real boon back in the nineties when the VR6 arrived – this gave the Mk3 the vivid performance it deserved, and boy-racers across the UK welcomed this fireball VW with open arms.

The idea of shoving a six-cylinder engine into a hot hatch seemed absurdly decadent… and you know what? It still does today!

NOW: VOLKSWAGEN MK7 GOLF R
Much like in the 1990s, today VW are offering a big-power halo Golf above the GTI level, and it’s an absolute monster.

The Golf R, however, does not have a six-cylinder motor… the old VR6’s spiritual successor was the R32, which ran for a couple of generations, but the new-wave Golf R rocks a 2.0-litre turbo.

Don’t go thinking the downsizing has compromised on performance though – that EA888 motor offers 296bhp; it may be the GTI engine at heart, but it’s got a modified cylinder head, valves, pistons, bigger turbo and intercooler… the Golf R may cost 20% more than a GTI, but it’s 20% more car, just like the Mk3 VR6 was.