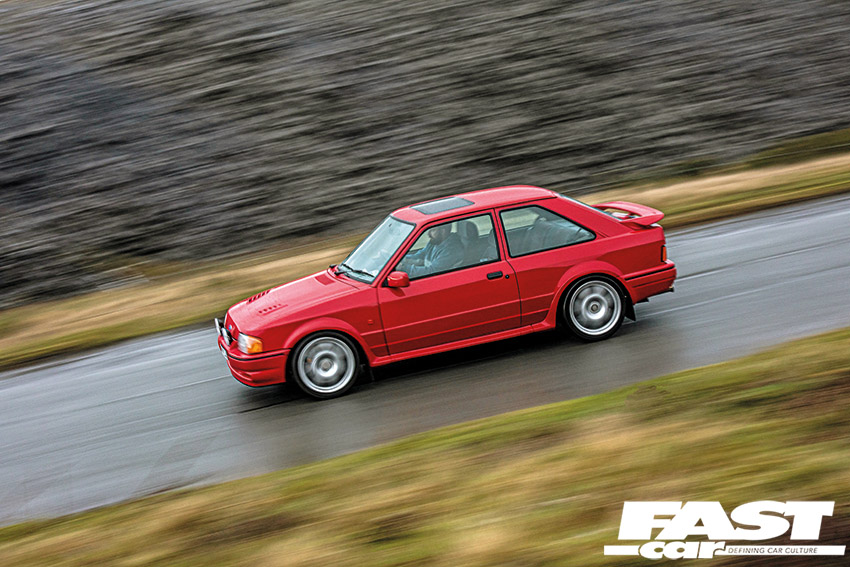 The idea behind Mat Grafton’s big-power modified Ford Escort RS Turbo build was born in the pub. But when tragedy struck, Mat had to take everything back to basics, reassess what was truly important, and set about raising the bar in tribute to a lost friend…

What you’re looking at here is three separate and distinct things. First and foremost, it’s a largely stock-looking Ford Escort RS Turbo Series 2, the only giveaway that anything is modified being a slightly lower stance over some pretty Raceline RL7s.

Secondly, it’s a bit of a wolf in slightly smaller wolf’s clothing; not a sleeper as such, as the modified Ford Escort RS Turbo has an inherently boisterous vibe, but there’s an incredible amount of horsepower and modern tech hiding under the bonnet.

And thirdly – and most importantly – it’s the product of friendship. The genesis of the project lies in the youthful monkeyshines of a bunch of best buds, while all the build decisions were made in pubs and curry houses. It’s not just a car, it’s a social lubricant. 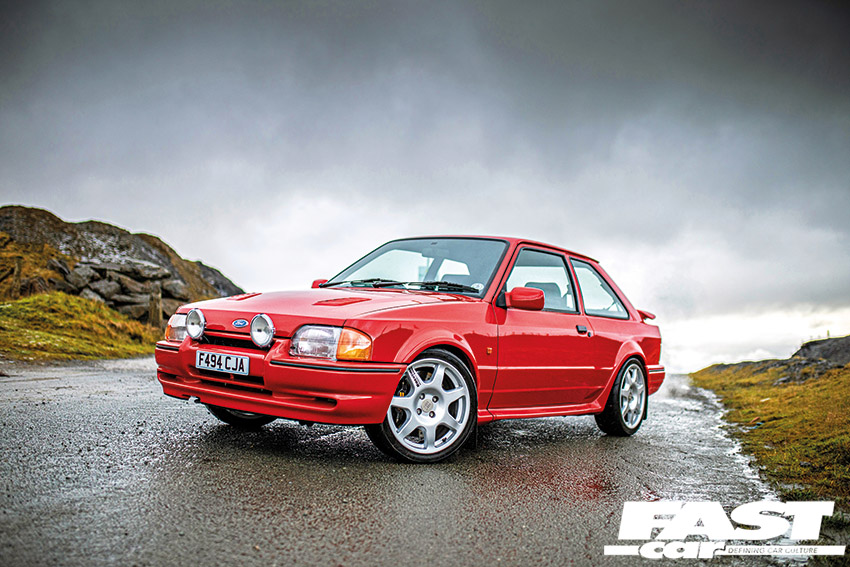 Carl Sagan, the eminent astronomer and cosmologist, once came out with this rather mind-bending quote: “If you wish to make an apple pie from scratch, you must first invent the universe.”

It’s a troubling notion for anyone of a creative persuasion, as it effectively strikes the concept of true originality firmly off the board. What he was getting at is that everything in existence is sitting at the end of a very long chain of actions and consequences; if you truly wish to take something back to first principles, it’s not just a case of unscrewing all the bits and seeing how it works.

True originality can only come from jump-starting the second big bang and creating a whole new universe for yourself, crossing your fingers and hoping against hope that something similar to Earth will evolve, with a breathable atmosphere and plenty of crushed dinosaurs beneath the rock to use as petrol in the cars you also hope will exist.

You might think that this notion would leave the world of car modifying bereft and hopeless, but no: with the burden of organic originality lifted, we’re free to take the nuts and bolts of what’s established and find new ways of reworking it. 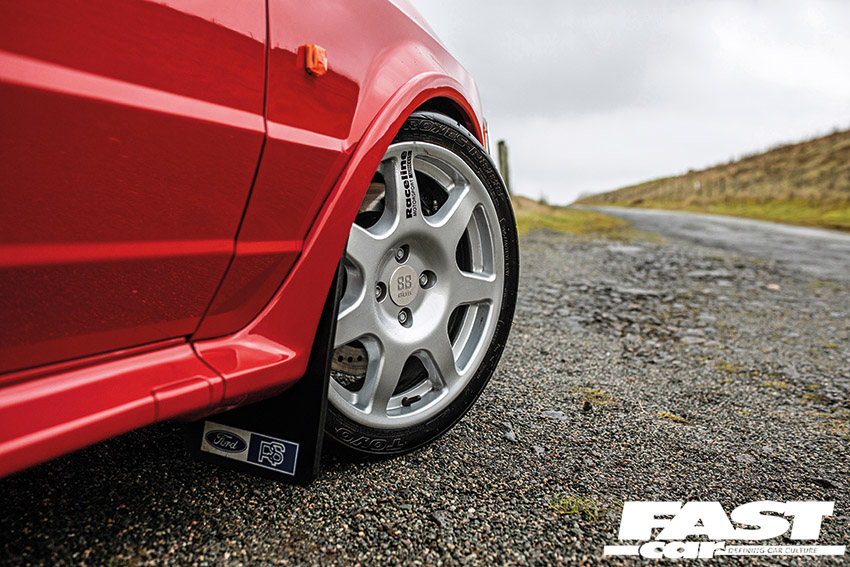 What this essentially means in the case of Mat Grafton’s modified Ford Escort RS Turbo here is that it’s not just an out-of-the-blue project: no, it’s the product of a long string of interconnected events. It couldn’t have come into being without all of the human and automotive interactions which have formed and shaped Mat as a person.

“I’ve owned and modified RS Fords since I was seventeen, when my older mates – Andrew Dawes (aka ‘Gus’) and Craig Barnes (‘Barnsy’) – took me out in their RS Turbos and Cosworths,” Mat explains. “So the reason for buying this RS Turbo a few years ago was for nostalgia, to bring back the memories of the first RS I bought back in 1999, and me and Gus and the lads having so much fun and mischief.”

It was New Year’s Eve in 2016 when, sat in a curry house with the boys, Mat happened across this particular S2 RST for sale locally on Facebook. He arranged a viewing, and a few days later found himself checking out an Escort in really quite impressive condition; it had only covered 180 miles in the previous eight years, and while it had a definite nineties vibe with its smoked lights, clear indicators and under-bonnet chrome, he could clearly see the potential. 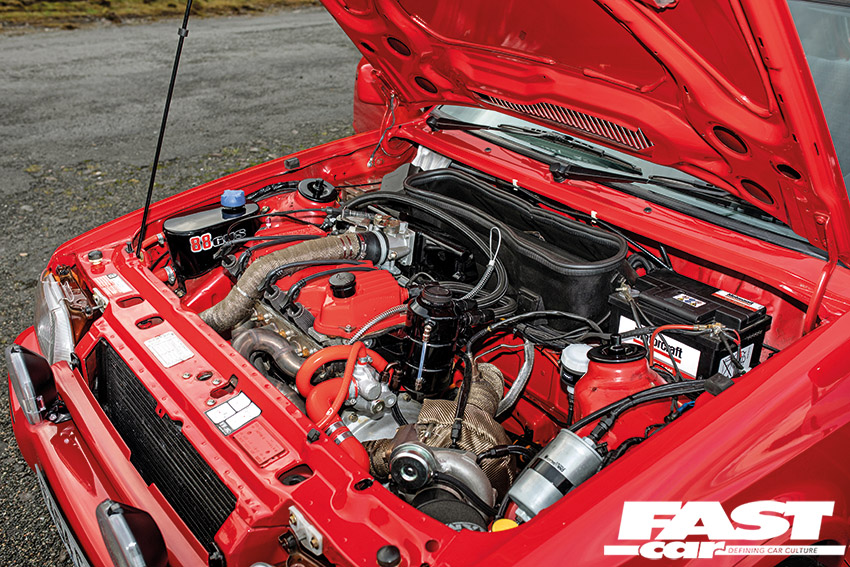 The engine spec was quite enticing too, running around 170bhp thanks to a tweaked T3 turbo, Pace Stage 2 intercooler, Mongoose exhaust and a few other tweaks.

With the car duly and eagerly acquired, job one was to start returning all the lights and various other mods back to OE standard, as well as swapping the steering wheel for an original-option 3-spoke RS item. The modified Ford Escort RS Turbo was then booked into Motorsport Developments for a proper setup, although the discovery that the compression was down on cylinder three changed the direction of the project somewhat.

“Gus told me to bring it over and leave it with him,” Mat recalls. “Bear in mind that I live in North Wales and he was in Sheffield – but as an epic mechanic and a very fast one too, I knew it’d be in safe hands with him. 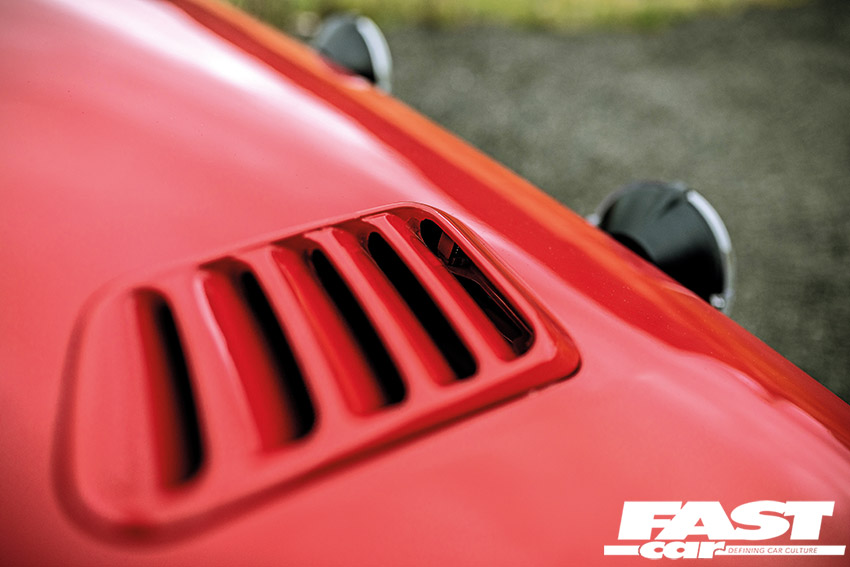 After many investigations, he informed me that I needed to get another engine! So I did a bit of searching and found a freshly-built CVH; I bought it, dropped it off with Gus, and one Saturday morning we set about fitting it… although once fitted, primed and fired up it was apparent that it was a bad build. The crank was knocking; I was gutted, but I knew I was in good hands with Gus has he always took the worry out of what seemed to me like major jobs.

Later that night we went to a mate’s pub, and after quite a lot of alcohol (me drowning my sorrows!) Gus was suggesting a big-spec modern build. With a pen and a notepad in the pub, while tipsy, he wrote a spec out as I kept us topped up with beer!”

The following day Mat went out on a mission with his little notepad, pulling together all of the parts that Gus had suggested for this crazy motor build. With everything eventually ticked off, a few important jobs needed doing for the sake of belt-and-braces – boring the block, checking the crank, facing the flywheel – and these tasks were farmed out to Andrew Lindley at A.L. Developments in Leeds. 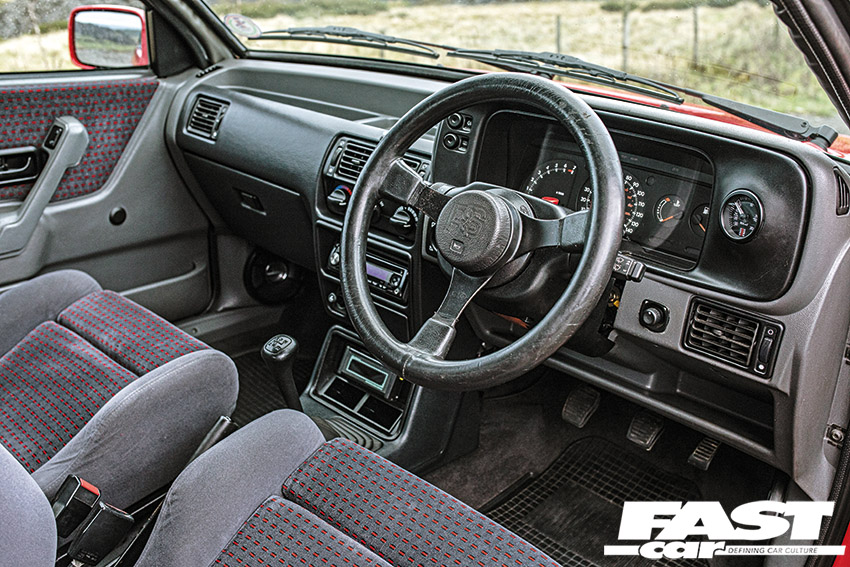 “Gus and I had planned for me to get up to Leeds to pick up all the parts on a Friday afternoon, take it all over to his and build it up over the course of that night with the help of some beers and a kebab, then take it straight for an MoT on the Saturday,” says Mat. You certainly can’t fault the confidence, or the enthusiasm. However, there was a slight delay on collecting the parts, so Mat rang Gus to explain the situation and cancel the MoT appointment.

“Gus was fine with that, saying that he would have a run out on his motorbike instead, and do the engine the following weekend when the parts were ready,” Mat continues. “So my good friend Gus went out on his motorbike, and he was involved in an accident. He died in hospital nine days later.”

A devastating turn of events, and quite understandably the car was put on the back burner as Mat struggled to process the emotional chaos of having lost his lifelong friend. 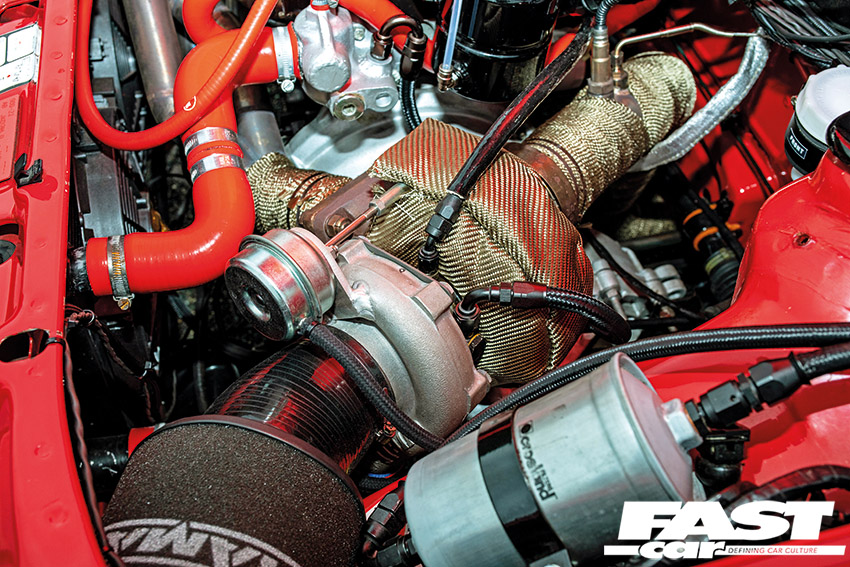 However, after a period of time and as the mental fog began to lift, Mat was struck by a thunderbolt of serendipity. “Andrew at A.L Developments offered to finish off the engine build, carrying it all out exactly as Gus had described it in the pub,” he explains. “This set the ball rolling to finally sort the car out according to Gus’ plan – building it with modern features to change how the RS Turbo behaves with big power.”

And that’s precisely what happened: Andrew’s blueprinted build boasts a frankly astonishing list of ingredients, as you can see from the larger-than-average spec accompanying this feature below, all mapped out according to Mat’s beer-stained notepad. The EFi block sports a stock crank, which has been polished and balanced, joined by forged Wossner pistons and PEC forged rods, while at the top end there’s a proprietary A.L Developments big-port eight-valve head with uprated valvegear and Newman PH4 camshafts. A modified S1 inlet manifold comes courtesy of Gone Racing, working with a Fiesta RS Turbo fuel rail and Deka 630cc 60lb injectors. 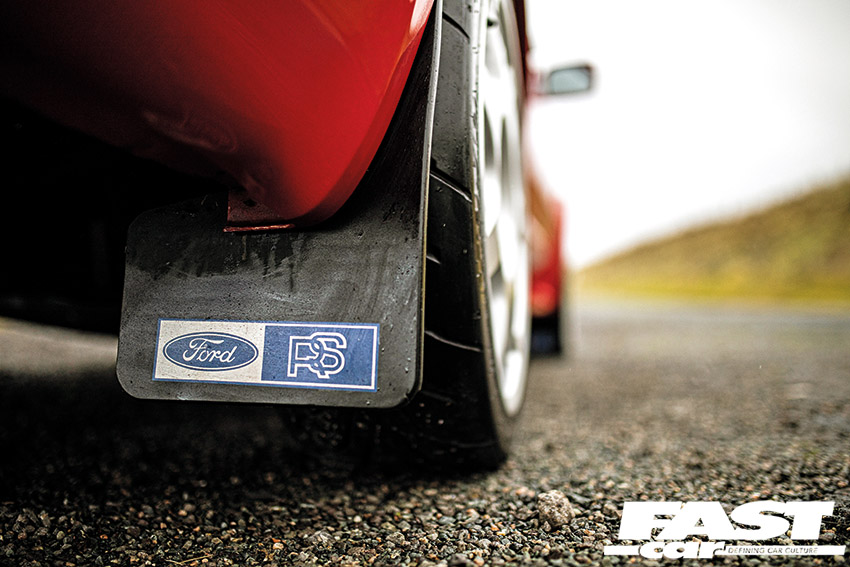 There’s a Sierra RS Cosworth throttle body, and perhaps the most seismic alteration is the Garrett GTX2867R Gen-2 turbo; sitting on a sidewinder manifold from ND Fabrications, it’s mated to RamAir induction and a Pace RS500-style single-pass intercooler. It’s all managed by Simtek Pro software, setup by Mark Knight and mapped by Stu at Motorsport Developments, which features such clever tricks as anti-lag, launch control and traction control.

The three-stage switchable boost means that all of this adds up to a relatively friendly (but still pretty serious) 224bhp at just 9psi of boost, a rather more forthright 242bhp at 13psi, and an utterly astonishing 303bhp at 24psi. Gus was really onto something here, mapping out a truly incredible engine build, and Andrew’s fastidious and painstaking work has meant that it’s all come to fruition in epic style.

“I use the car hard around North Wales, and I also love cruising in it,” Mat grins. “People at local meets seem to love the car – especially the fact that I use it all year round.” And why wouldn’t he? With the memory of his old friend acting as his co-pilot, Mat’s got the perfect tool for everyday thrills. It’s not just a car. It’s a bundle of memories. And now he can spend every single day raucously and joyously making new ones in his modified Ford Escort RS Turbo. 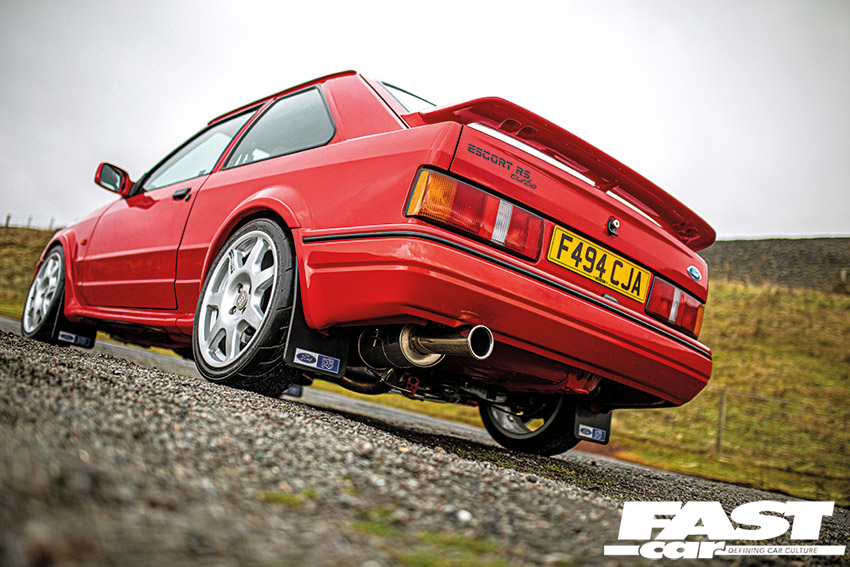