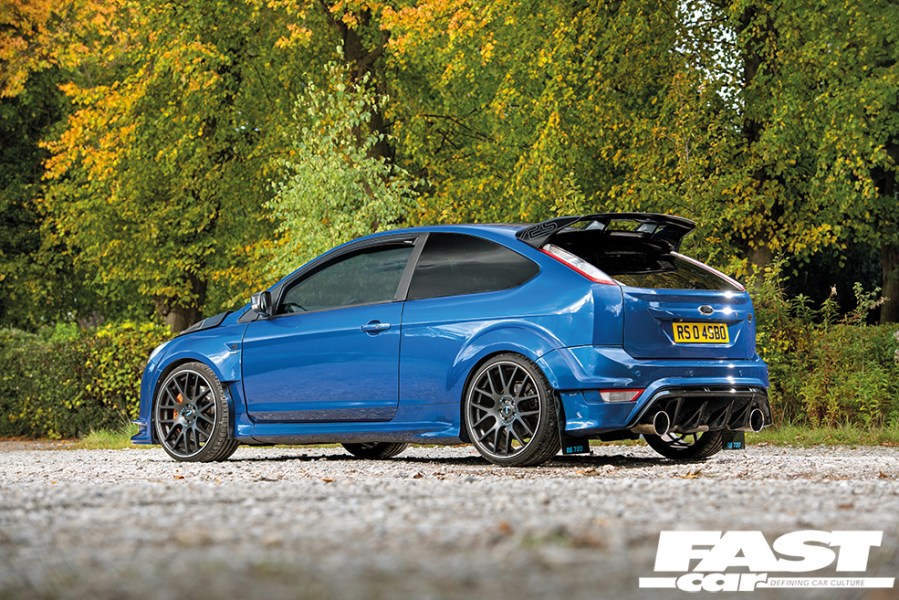 Understatement of the year goes to Steve Hill, owner of this bonkers modified Focus RS Mk2 with a whopping 722bhp under the bonnet!

What performance car would you upgrade to if a 600bhp modified Focus RS Mk2 wasn’t crazy enough? Most of us will never have to answer that question, but in March 2020, Steve Hill was in exactly that predicament.

Already on his fourth – and maddest – Mk2 Focus RS, he could have gone looking at sports cars or German über saloons to get an easy fix, but he was in love with Ford’s most potent front-wheel-drive hatch and just couldn’t get them out of his system.

Steve says, “Every time I got rid of a Mk2 RS, I immediately asked myself why I did it.  They’re just so good; they go fast, they sound great with the five-cylinder burble, and they hold their value well.” 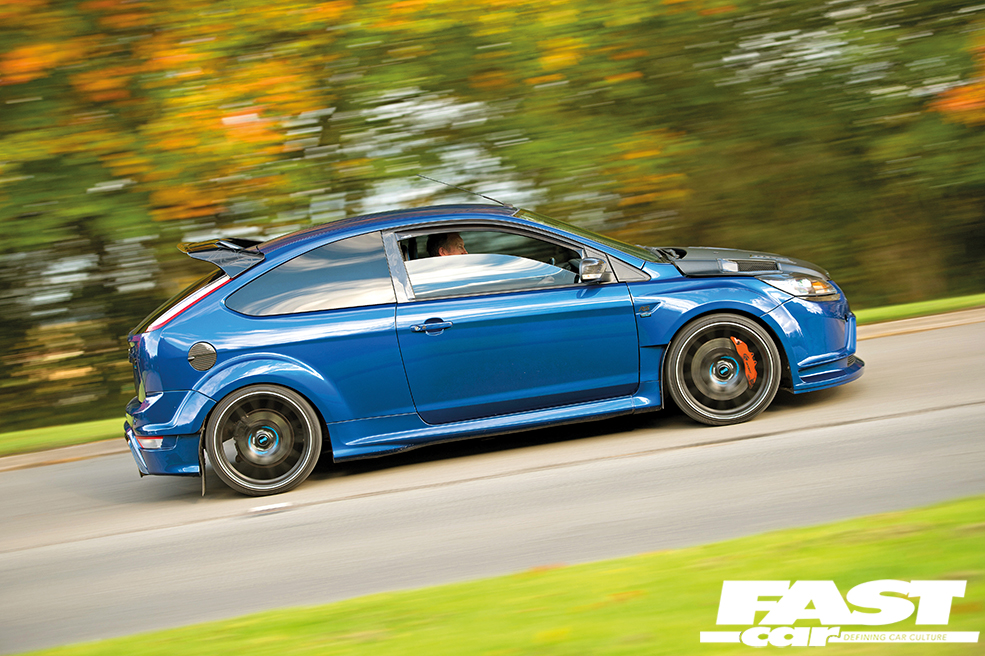 As fate would have it, he got the opportunity to upgrade to an even more powerful modified Focus RS Mk2 when he spotted this example lurking in a trader’s showroom.

“I actually knew the car and its previous owner, who I’d bought parts from over the years. I tried on several occasions to buy it from him during that time, but he always refused to sell,” explains Steve.

With his dream-spec Focus now finally on the market, Steve wasted no time in part-exchanging his Ultimate Green machine for this Performance Blue beauty, and drove home with a great big smile on his face. 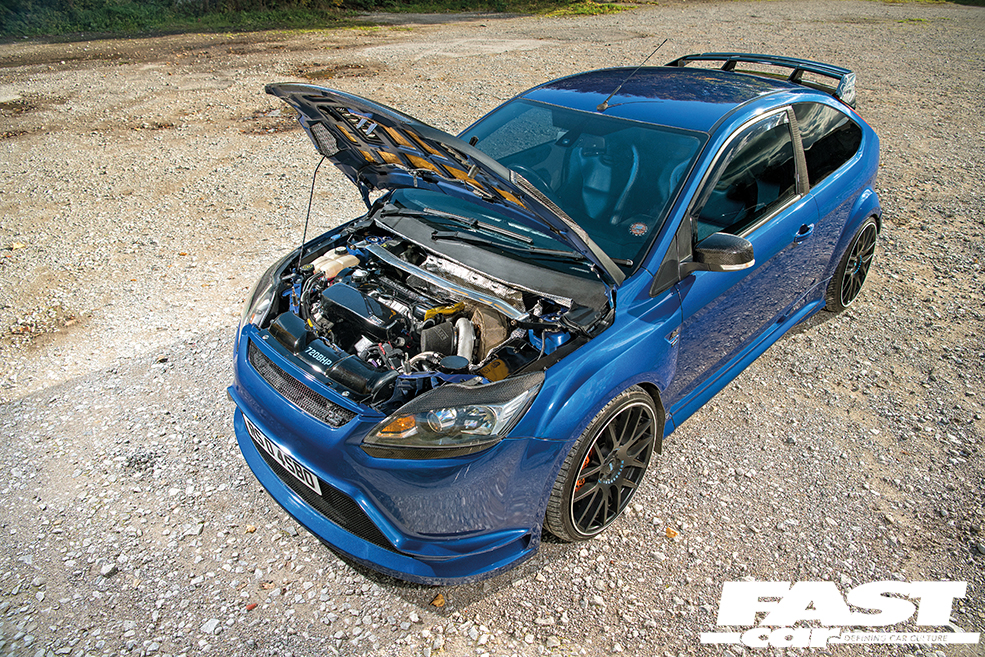 “I was driving into work, and it conked out all of a sudden,” Steve recalls. “It wouldn’t start, and when the AA man came out he turned to me with a serious face and said it was a bit more than just the electrics at fault.”

The AA man obviously didn’t want to see a grown man cry; the issue was indeed much more than a mere electrical fault. In fact, the entire bottom end of the engine had been completely wrecked by a freak clutch failure. The engine internals, as well as the block casting itself, were all scrap.

With so much invested in what was still a uniquely modified car, Steve decided to bite the bullet and have the engine rebuilt back to its former glory with brand new parts.

He smiles, “My request to the engine builder was to not scrimp on anything, and after a lot of time and money it’s now back to the same spec as when I bought it. It’s done 1200 miles since then and doesn’t use even a drop of oil, which most of my Mk2 RSs have done. I’m confident this time it’s going to last.” 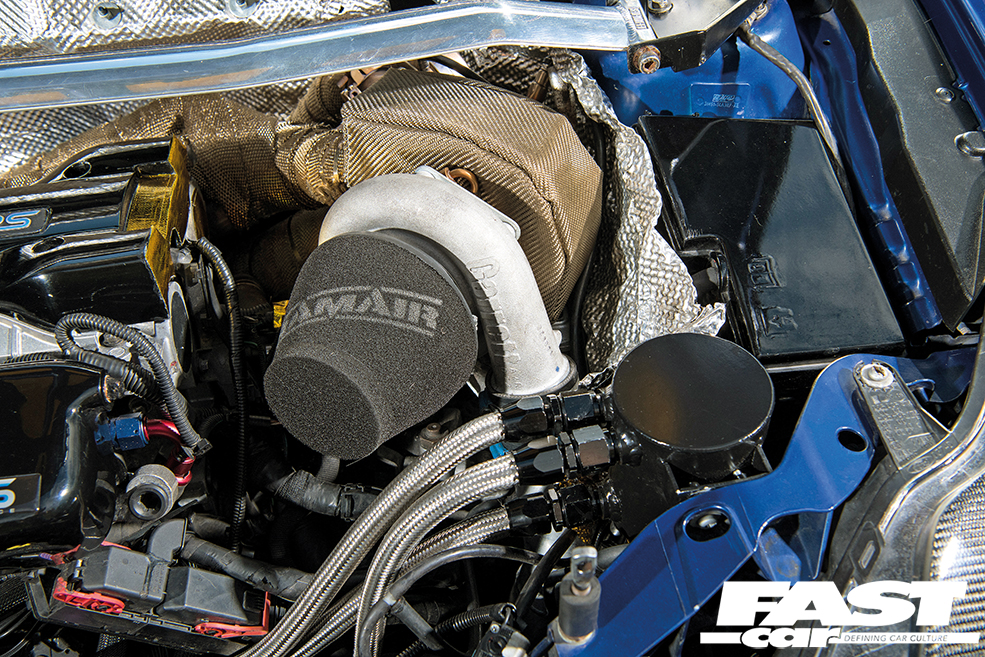 The spec list is impressive, extensive and very expensive. Stars of the show are the forged bottom end, Garrett GTX3584RS turbo, and Maxx ECU, tuned by Gordon at Street Racers. It’s still on what Steve calls a safe map, but even these conservative settings produce 720bhp and 550lb.ft of torque.

The numbers are no doubt impressive, but it’s the driveability that blows Steve away: “The turbo doesn’t kick in until around 4000rpm, but ironically that boost characteristic is what makes the car driveable. Thanks to the right ECU and mapping, I’d say this car is more tractable than my old 200bhp RS Turbo – which just spun its wheels everywhere. Don’t get me wrong, the power is mental, but the car puts it down really well.”

To highlight this point, Steve adds that if he raced the modified Focus RS Mk2 against his old 450bhp Escort Cosworth, the four-wheel-drive rally legend wouldn’t stand a chance. 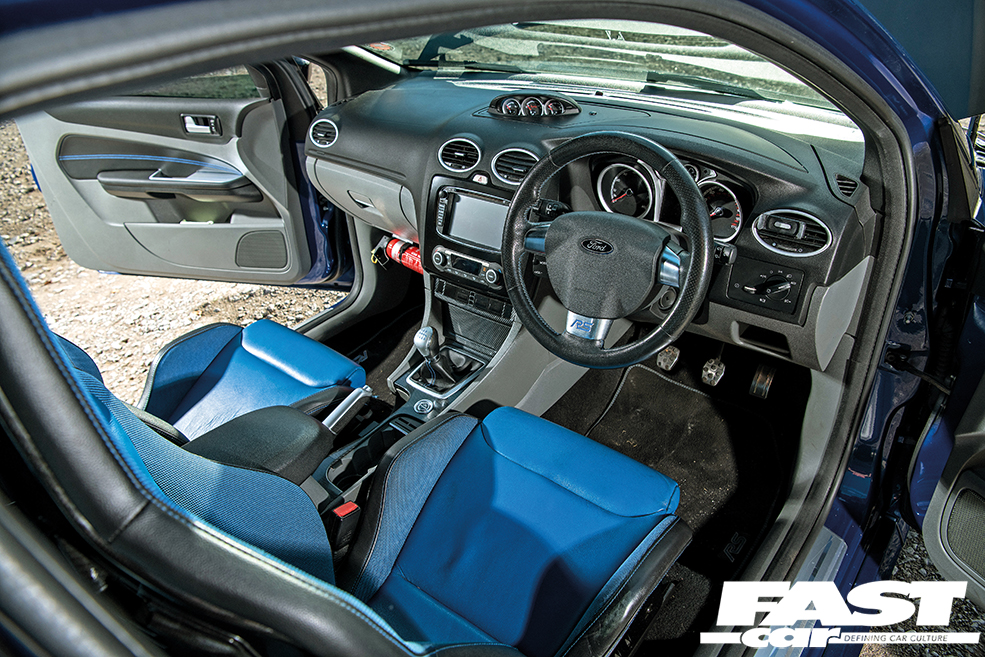 The rest of the car has been left exactly as Steve bought it, including the bodykit that he initially wasn’t keen on. He says, “I had doubts about the WRC front bumper and the other WRC bits, as they’re quite loud, but after a while they really grew on me. There aren’t many Mk2 RSs about with those parts, so my car does stand out among others at shows.”

If the lairy bodykit isn’t enough to grab your attention, the big 20in alloys with 30-profile tyres certainly will. From a performance perspective, Steve reckons there’s little difference between 20s and the 19s that he usually runs on Mk2 RSs, but he notes there’s a very noticeable difference between the two in comfort: “The 19s definitely ride better. The 20s are much more bumpy, and you have to watch out for every pothole as there’s no tyre sidewall to protect the wheels. But on the flip side, they do look good.”

Behind the spokes are equally gargantuan brakes: no less than 380mm of disc is squeezed by six-piston callipers and PBS pads, which seem to be an increasingly popular fitment on some very fast Fords. 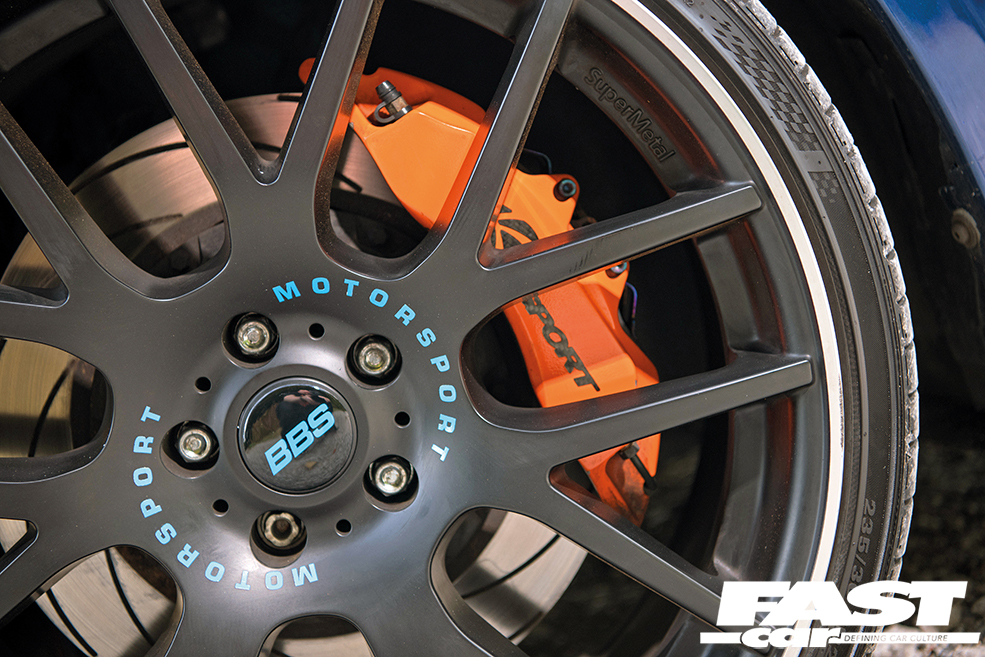 The mods combine to create a truly epic driving experience. As Steve says, “The screamer pipe, the five-pot sound, and the pure unrelenting shove completely bombard your senses, and usually scare any passenger half to death. I love driving it every day; I think life’s too short not to get out and enjoy it.”

Despite the twinkle in his eye as he describes the madness of second- and third-gear pulls, Steve recommends to anyone else thinking of going this far with a Mk2 RS to think again.

He explains, “I feel that 500bhp is a real perfect sweet spot for the platform. Yes, 600bhp or even 700bhp is faster, but at 500bhp you get the perfect blend between performance, fun, cost and reliability. A 500bhp Mk2 RS will do 95 per cent of what a 700bhp one will without any of the hassle.” 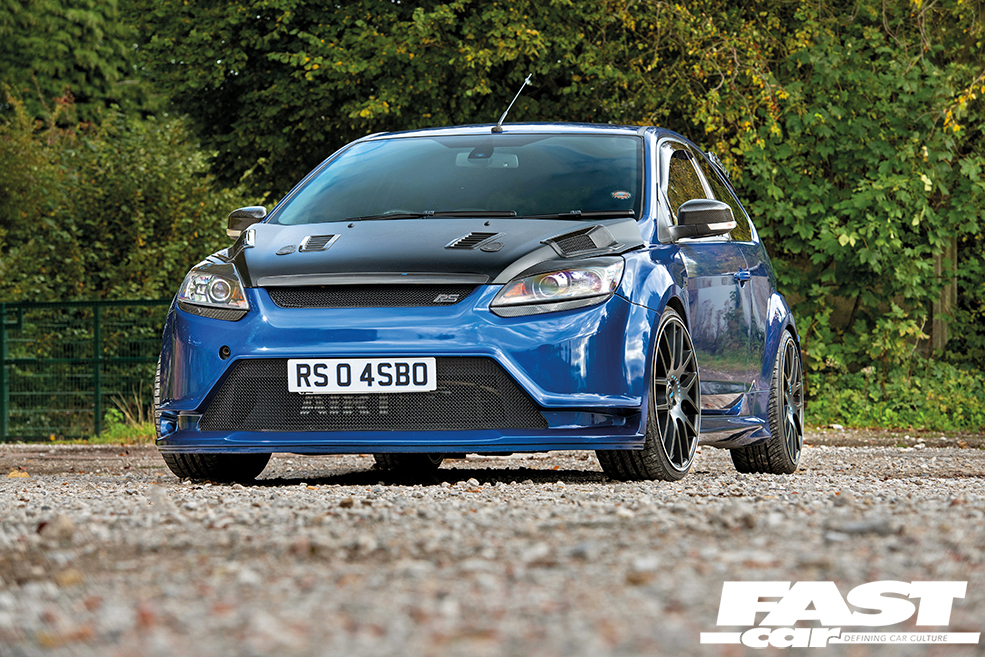 Taking such a calm lesson in restraint from a chap with a 722bhp modified Focus RS Mk2 is a bit surreal, but he quickly reveals his power addiction when asked what’s next on his agenda.

“I need another upgrade,” he says with a smile. “I’m thinking of getting a Mk3 Focus RS, but it would have to be highly modified. They’re just a bit boring without massive horsepower, aren’t they…”