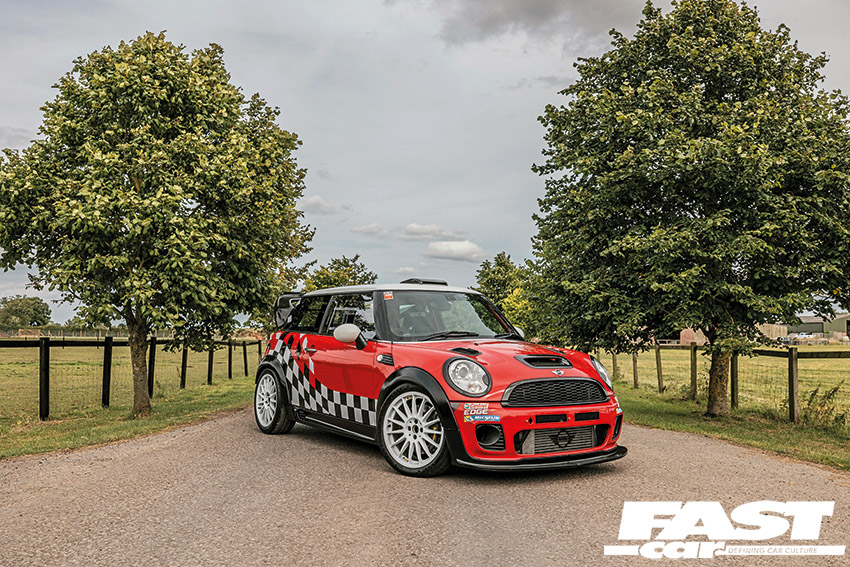 James Brooks was curious what it would have been like if Mini had campaigned the R56 Cooper in the WRC, so he created this stellar JCW track car build to demonstrate just what an excellent idea that would have been…

Uniqueness is a quality we all strive for with our project cars. Whether it be trying new ideas, remixing formulas or doggedly pursuing the offbeat, it’s testament to the creativity of the scene that we constantly find such diversity. And if you really want to do something different, it only takes a minor deviation from store-bought off-the-shelf parts before you find yourself tumbling down a rabbit-hole of homemade custom work. Depending on the skill level of the individual, this can go very right or very, very wrong, but it’s safe to say that with James Brooks calling the shots, this Mini Cooper JCW track car is in safe hands.

“I spent the last 20 years inventing and selling tactical thermal imaging cameras to special forces, and fully integrated helmets to the military,” he says, which isn’t a sentence we’ve heard before, “and for fire safety and personal security on super-yachts for the likes of Roman Abramovich and the Sultan of Brunei – and also to Formula One teams for their pit crews.” Right. Safe to say he’s pretty well-served in the aforementioned areas of creativity and skill then, and when it came to this Mini Cooper JCW track car, James had a clear idea of what he wanted to achieve. “I had a thought of what would it be like if Mini had chosen to use an R56 to compete in the World Rally Championship,” he reasons, “and as no-one had done that or made any parts, I had to get on with it myself.” Fair enough really, can’t argue with that. 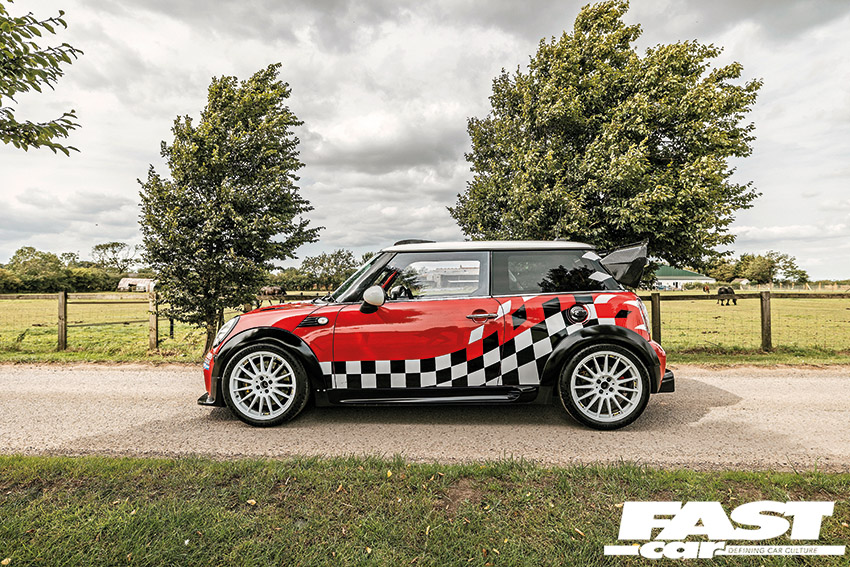 “I cut out the inner arches,” he continues, “and made the outer spats wider using GRP with Kevlar reinforcement to enable fitting the larger-diameter wheels. The rear wing was a GRP Polo WRC spoiler which came nowhere near fitting, so I got out my carbon and Kevlar modelling skills and set out to make it look how I wanted. All the styling was to suit the look of a WRC car; I made the rear diffuser first of all in Kevlar as I wanted the full motorsport effect, only to have to remake it in carbon to match the rest of the carbon parts as folks who saw it said ‘Yes, the Kevlar looks great, but it doesn’t match the rest of the car’!”

This isn’t James’s first crack at modifying a Mini; indeed, his back-catalogue of projects makes for fascinating reading. Growing up on a farm, he had several field cars including a ’78 Minivan, then moved onto rear-drive Ford Escorts; many years down the line, after a Sunny GTi-R and a Subaru Impreza 22B among others, the first Mini he bought was a 2004 R53 Cooper S, the fusion of go-kart handling and supercharged power being simply too much to resist. “I was lucky enough to be British Superkart Champion and North-East Sprint Champ many moons ago,” he explains, “and I wanted a car that I could have fun in and possibly get back to a track with. The Mini chassis is so right for that.” 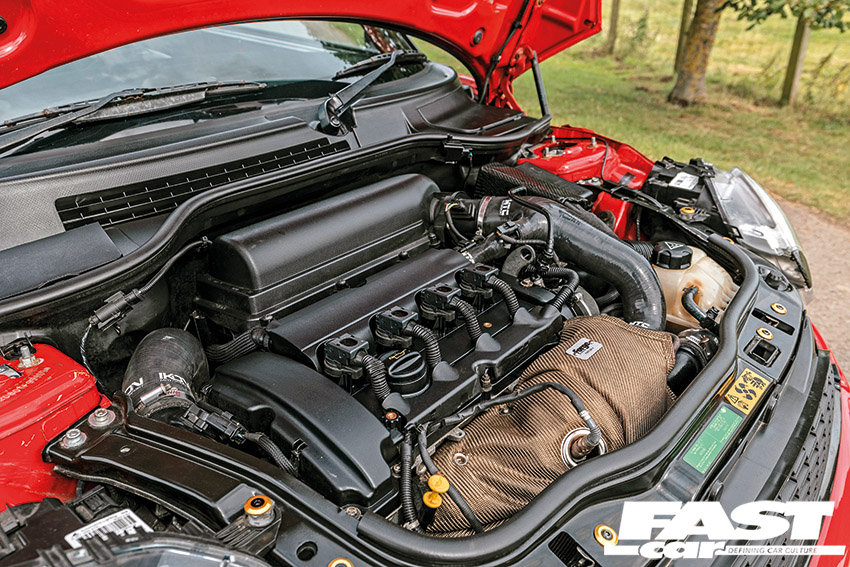 So the seeds were sown, and having bought, built and sold an R56 Cooper S with a bit of a motorsport feel, James was keen to pick up a JCW that he could really get stuck into as a track car build. This particular John Cooper Works model popped up belonging to a friend’s brother; it had been used as a daily commuter, so it was a bit rough-and-ready in the details but mechanically strong, and this made it the perfect donor for what James had in mind. 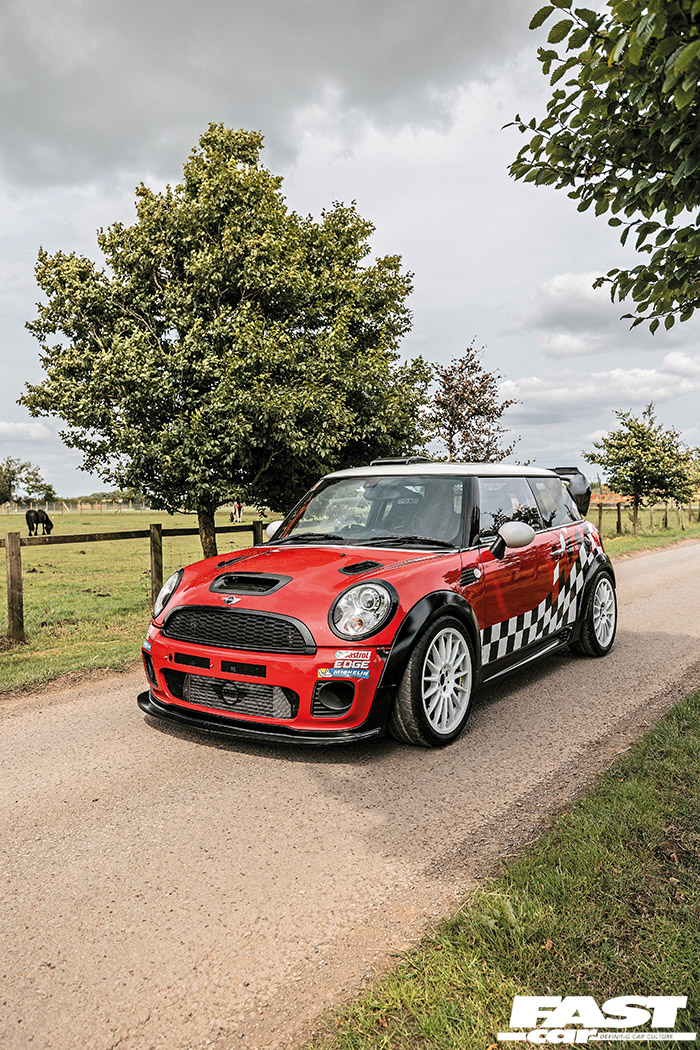 “The first thing we did was a compression test and leak test on the engine before doing anything else, and it was a good, tight engine to start,” he says. “Maybe it had been rebuilt by a previous owner, as it still uses very little oil and never seems to complain given the life it now has! The motor is largely standard JCW but with a head skim and competition gasket; there’s an Airtec intercooler, Scorpion de-cat into the standard JCW system, and it runs a Turbosystems 03-0163 hybrid capable of 300hp. It’s obviously maximising somewhere near that, given its capability against much stronger cars at a recent track day at Croft!” 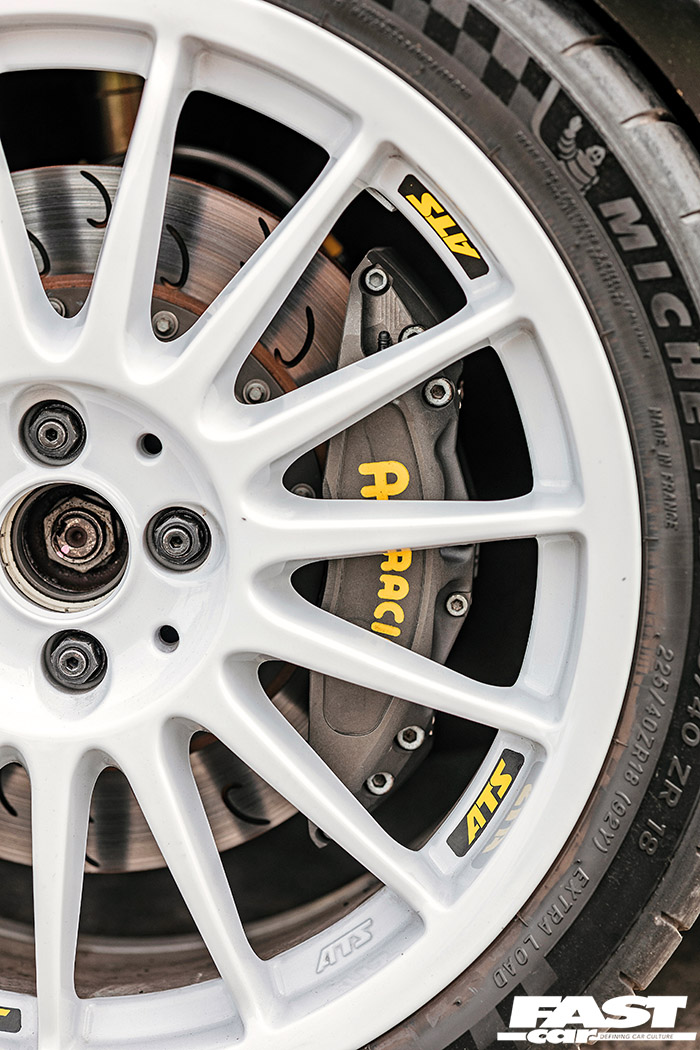 With a live Stage 3 map by TRW, the assorted upgrades are certainly doing the business on track. Of course, there’s far more to circuit prowess than powerful engines, and the chassis of the Mini Cooper JCW track car has been comprehensively upgraded to suit. With the initial aim being to create a fast road car capable of good track manners, James fitted ST coilovers and Hardrace adjustable lower arms so the geometry could be set up correctly; Proflex bushes throughout and a solid lower engine mount reduce the kinetic tolerances, and the focus has been as keenly on form as function. The wheel choice took a bit of head-scratching, as James was keen to find a multi-spoke wheel in white for that WRC look, and the ultimate decision was a set of 7.5×18” ET38 rims by ATS, just like Mini themselves use in Tarmac spec. 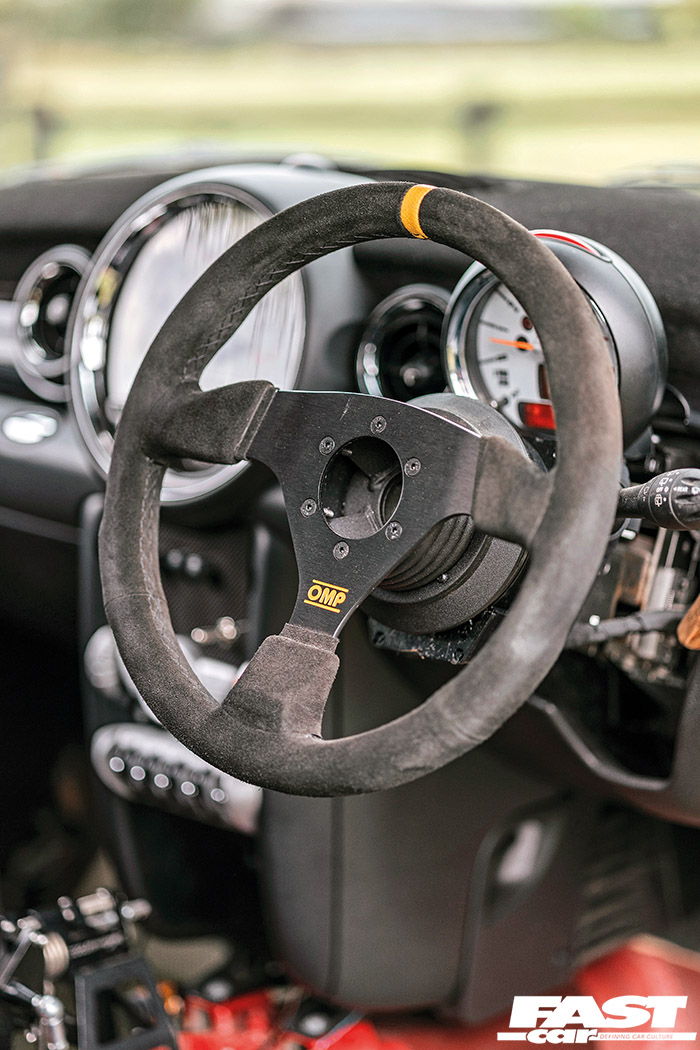 With the rally look and feel now sitting front-and-centre in the gameplan, the cabin was addressed with ruthless efficiency: everything superfluous was stripped and binned, including the air-con, carpets, window glass (replaced by lightweight polycarbonate), and the heavy airbag steering wheel, ousted for a lighter, chunkier and gripper item. “I made Kevlar floor trays, along with my own carbon door cards to suit the look,” says James. “A smaller competition battery was relocated to the boot, and a smaller windscreen washer bottle just behind the passenger seat. This gave me space in the engine bay and made things tidier as I went.” 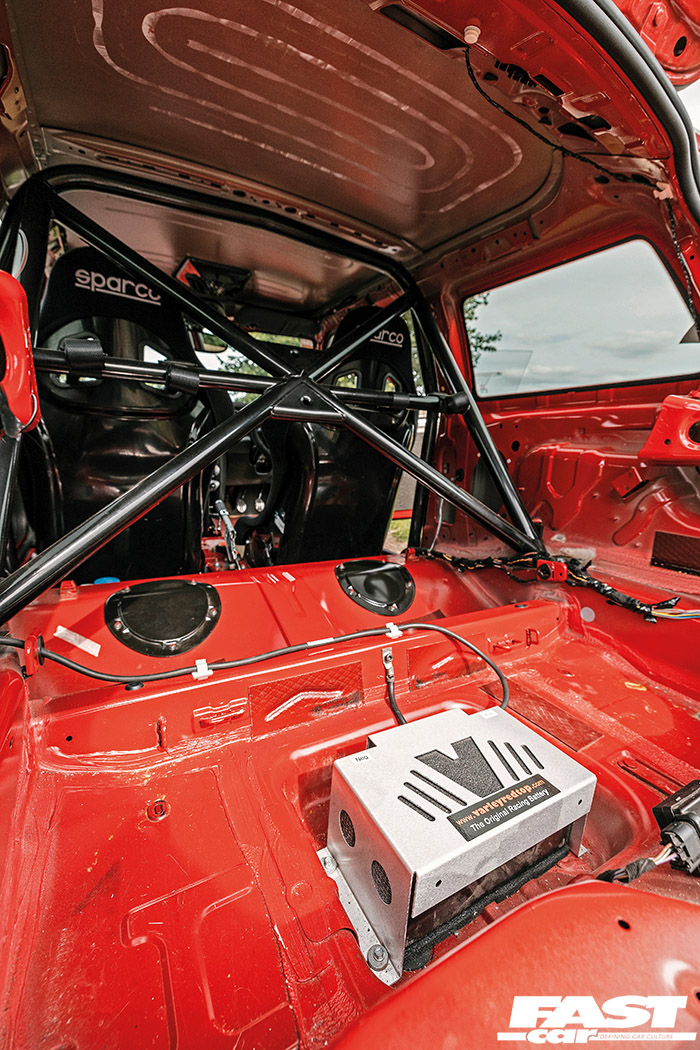 It’s clear throughout that form and function are very much on equal pegging, and the levels of James’s imagination and craftsmanship are unimpeachable – as is very much in evidence when it comes to the exterior. “I made piping to flow air to the brakes using the space where the spot lamps would normally be,” he says, “and I wanted the bonnet vents to be the same shape and style as the WRC ones so I had to make them by hand, using matt carbon as my finished look – I created many templates before going for it and cutting two holes in my bonnet! The vents have the same vertical rubber trim as on WRC cars; however, I used window seals which I knew we had spare from my wife’s greenhouse to get this look! Not sure she knows that…”

The enthusiasm for cutting holes in things showed no signs of abating, with the front bumper comprehensively ventilated, and even a hole chopped into the roof for a functional carbon vent. A lot of gritted teeth along the way, but the results are uniformly superb. James’s sense of purpose was at the forefront throughout the build, creating arguably the ultimate version of what a Mini Cooper R56 JCW can be, as refracted through a WRC filter. The quality and the creativity shine throughout, but it’s the uniqueness that really makes the build special. An absolute weapon on track, and a total stunner to behold as well. It’s a shame that Mini never campaigned the R56 in the WRC. Imagine this Mini Cooper JCW track car powering through the slush above Monte Carlo – it’s quite an image, isn’t it? 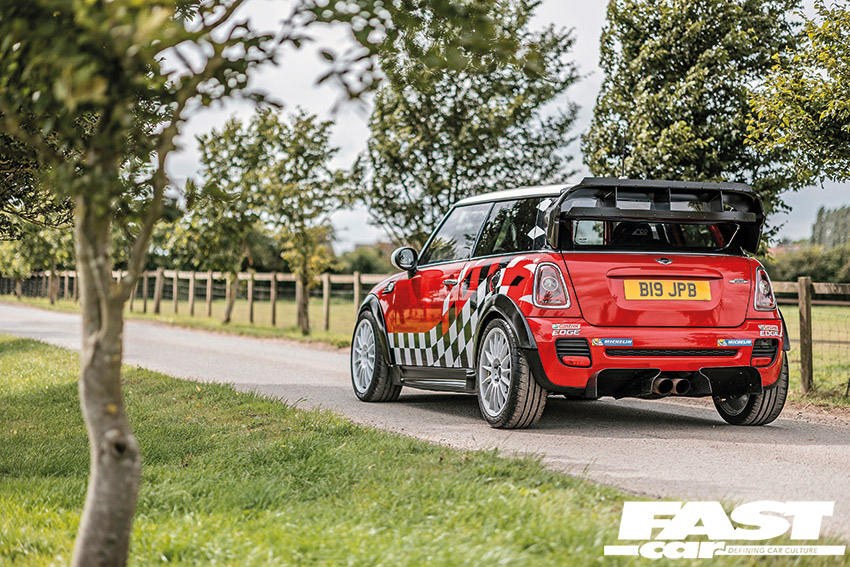