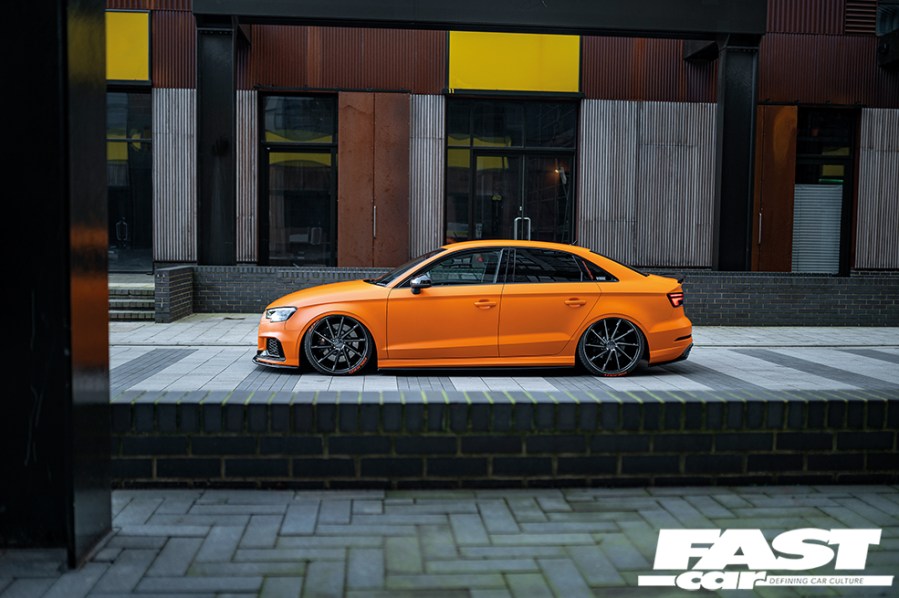 When it comes to sensible family transport, you don’t need to give up on life and condemn yourself to a boring car. Martin reckons the solution is a bright orange bagged Audi RS3 saloon.

There are many reasons to modify a car. For some, there’s an over-arching plan in mind from day one, painstakingly mapping out the path to the result, while others take a more evolutionary approach; some modify for track-biased agility, others for outright speed on the strip, while yet more angle toward showground lows and a fabulously detailed finish. There are a million angles of approach. But we’ve had a comb through the archives, and we reckon this is the first time that someone’s cited the primary catalyst for embarking on a protracted modifying mission as: ‘some guys were chasing my wife with a crowbar’… 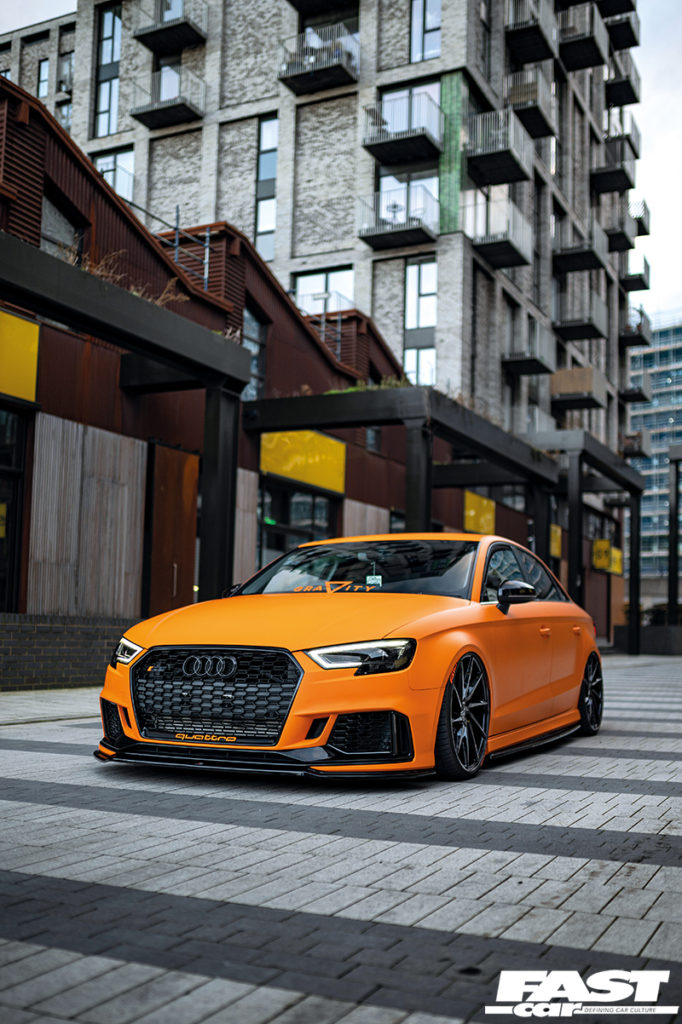 Joking aside, it must have been terrifying. Martin Knight, having acquired this Audi RS3 saloon as a brand-new family runabout in 2019, explains just how his plan to keep it standard for a while rapidly altered: “The car was originally bought for my wife as an upgrade on her S3; she wanted a red Audi RS3, but we got a deal on a Panther Black one that we just couldn’t say no to,” he recalls. “The idea was to get it wrapped in maybe a year or two, but after an eventful collection of the car that soon changed! Having picked up the RS3, we decided to go to the local Pizza Hut to get the kids some dinner; it was only ten minutes down the road, and I followed my wife into the car park – and being a new car, she parked a few spaces away, so no other car was nearby. As I got out of my car, I saw someone pull up behind her and two blokes jumped out and started demanding the keys from her while brandishing a crowbar. Luckily, being so close, I was able to get over to her screaming and shouting, which meant the blokes got back into their car and drove off.”

Frightening stuff indeed, and it’s hard to say what your natural reflex to such a scenario would be until you’re in it. Ever the pragmatist (and, of course, lifelong modifying fanatic), Martin concluded that the logical response would be to mod the Audi RS3 Saloon to make it very distinctive, thus making it a lot less nickable and a lot easier to track down if the robbers do come a-calling again. Which, in a nutshell, is why it’s been Tango’d.

But let’s rewind a little. What was it that pushed the Knights toward an RS3 as a family car in the first place? “Oh, it was definitely the five-pot noise and the performance,” Martin grins. “My wife had an S3 saloon which was great, but we really wanted that extra noise and power that the RS3 brings. The fact of it being a saloon was a big thing for us too, as we felt it just adds a little more to the RS3 over the Sportback from the aesthetic side of things. We reckoned that it was the best performance car that can be used every day with the family, but can also happily hold its own on the drag strip or turn up at a show.” 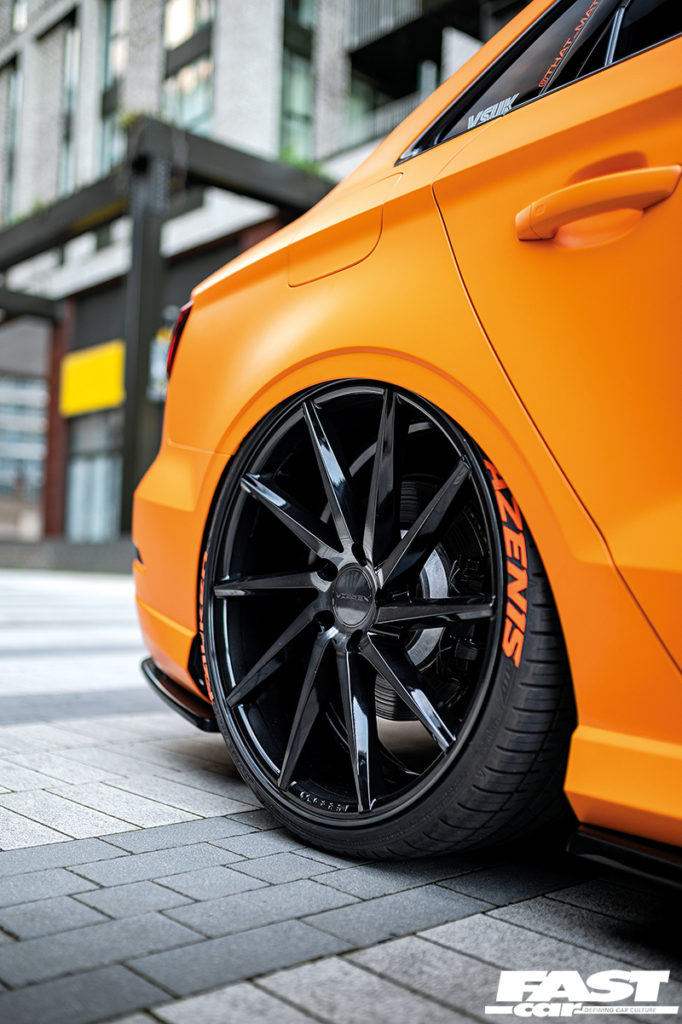 An all-things-to-all-men option then, and there’s an undercurrent of mischief running deep below this veneer of sensibleness. You see, Martin’s automotive history reads like a who’s-who of cars that were primarily designed to get people into trouble: a Mk1 Toyota Supra, a couple of Fiesta XR2s, a ragtop Renault 19 16v, and ten classic Minis, plus a whole bunch of other stuff.

“I’ve always liked to drive something that was a little different or stood out,” he reasons, which is basically the line of thinking behind everything we do (and, indeed, why this very magazine exists). “Thinking back to one of my old Minis, for example, it was one of the only Minis at the time running 15in alloys, Fiesta rear lights and a Cosworth front bumper!” These still waters, they run deep, and it was perhaps inevitable that the full weight of modification would come crashing down on the Audi RS3 saloon sooner rather than later. It was just that, as Martin says, events conspired to make this all happen rather more quickly than expected. 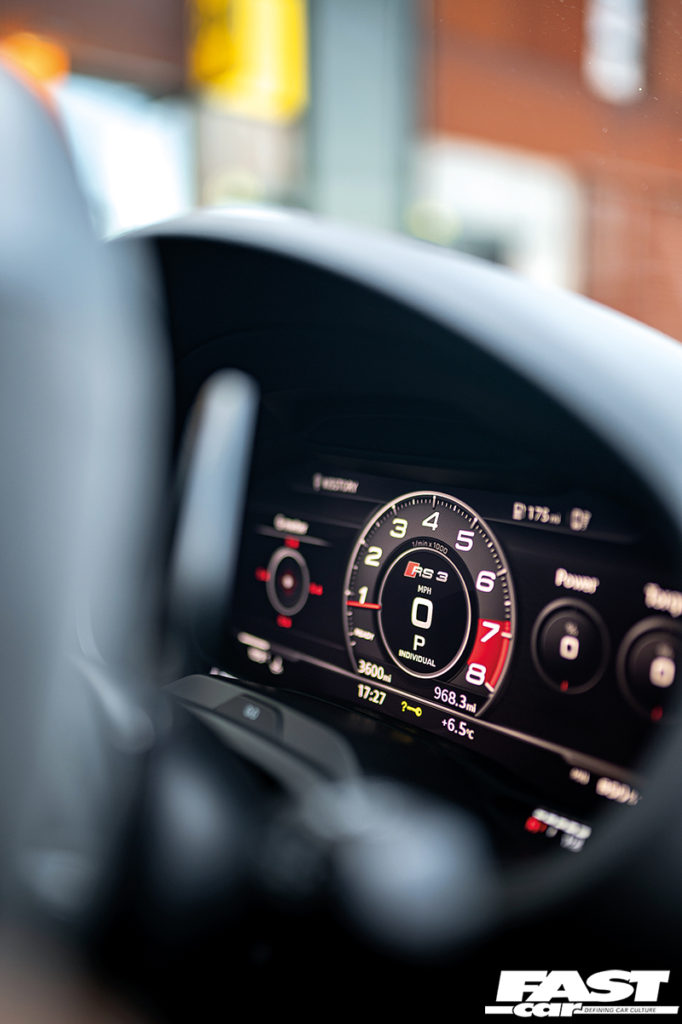 Now, if you want to make your car more eye-catching and thus essentially thief-proof, there are a number of colour choices your brain might cycle through. Luminous pink? It’s an option, but then you do have to live with a luminous pink car. Full chrome? Nah, it’s not 2001. Bright orange? Yep, that’s the sweet spot – dripping in vitamin C and oh-so stylish. So it was a 3M satin wrap that the Knights opted for, lovingly applied by Urban Automotive, and at the same time the exterior was de-chromed and the OEM wheels refinished. (It wasn’t the plan at the time to change to a different set of wheels, but you know how the game’s played…) A significant visual overhaul, and Martin reckons that to this day his favourite thing about the car is the wrap: people are always asking about it, whether it’s on the showground or just popping to the shops. However, after this first round of modifications, 2020 happened.

When they bought the car on December 28th, 2019, the Knight family couldn’t have possibly foreseen just how rocky the path to modifying success could be. As if the crowbar incident wasn’t enough, then came the almighty slap in the face of Covid to fundamentally cock-up everybody’s plans. And it’s a story we’ve heard time and time again recently – as that first lockdown kicked in, and we were all sat inside gazing balefully at our unused and dusty cars through the window, plans were being made in earnest all over the scene. Obviously, Martin was no exception. 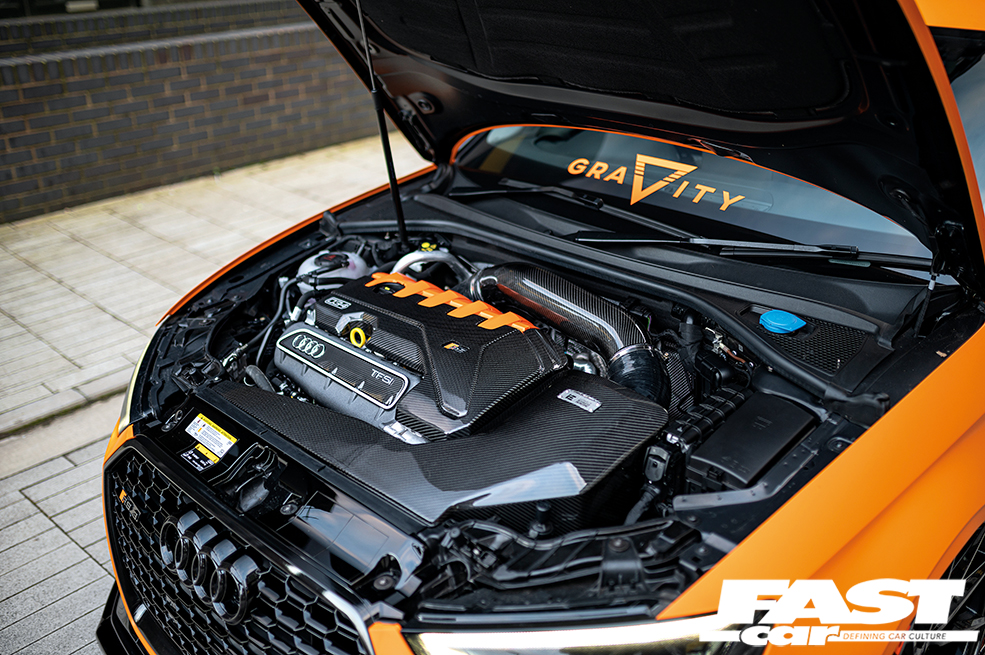 “I found I was spending more and more time looking at different options,” he recalls, “because now the car looked good being wrapped, but the wheels weren’t quite right. So that then led to weeks of swapping between different options before deciding on the Vossens, which in turn led to the lowering springs.”

You’ll no doubt recognise the symptoms of the snowball effect. And so, it goes on: “When things started to open up again, we managed to get to some meets and shows in the summer. I remember going to Tucked Meet & Eat and seeing these cars on air… I was never planning on air-ride for the RS3, but after attending that meet it changed my mind and I could see the potential! So, when Tucked released details for the second Meet & Eat, I knew I had to get the air installed before that show – which was just five weeks away. After speaking to Brandz, I decided to go with a MaxLoad kit. I then contacted Deutsch Tech in Milton Keynes in the hope that we could get it booked in and fitted; they worked their magic and we had it all installed and tested ready for the meet! It was the plan from the off to have the air and wheels work together for more of a tucked/fitment look rather than slammed on the floor.” Mission accomplished, we’d say, as it looks awesome aired out – on-point stance with a touch of Touring Car aggression. 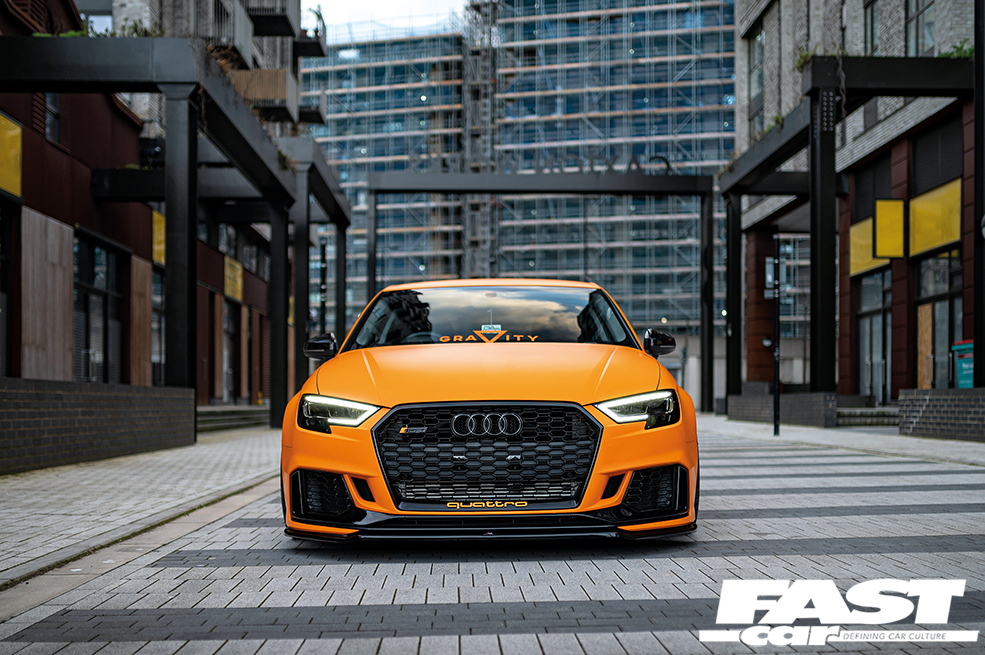 Over the course of 2020, the spec continued to evolve. The searing orange is artfully complemented by glossy black details, in the form of a front splitter, sideskirts and rear spats from Maxton Design and a wonderfully imposing mini-ducktail, while inside we find some racy details including the Ultimate Customs paddle extensions and a BAF Motorsport K-brace as well as the big ol’ can of Tango. Don’t forget that it’s still a practical family car though, hence the continued presence of the rear bench – the car needs to retain its polymath status. And yes, before you ask, the Knights have upgraded the car’s security. Massively. Any tealeaf who tries their luck with this one is going to have a very bad day.

“Having always had a passion for modified cars and being out of the scene for a number of years being an adult and bringing up a family, it’s a great feeling to be back in the community,” says Martin. “It’s been great to meet new friends, and fingers crossed things will work out this year to get to more shows.” 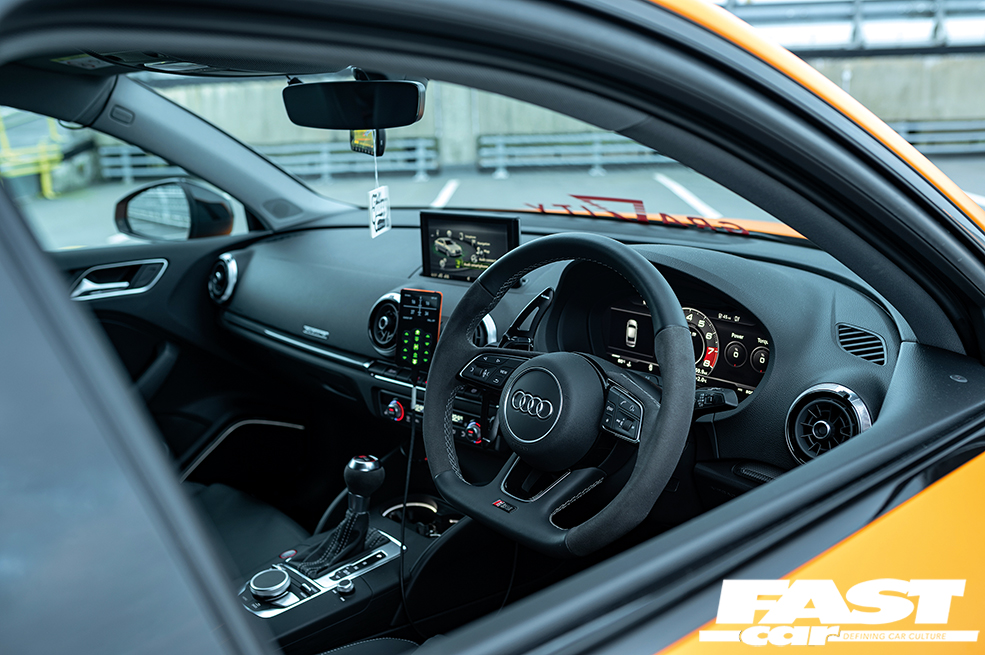 It’s a sentiment we can all heartily agree with. And don’t go thinking that the Knight family are viewing this vividly hued bagged Audi RS3 saloon as a finished product to go out and display as a showpiece. There are more plans, of course there are. After all, the most recent lockdown was a really long one, and it provided ample browsing time. “The next thing will be to fit a custom or uprated exhaust,” says Martin, “as being the 2019 model it has the GPF filter, so the noise has been markedly reduced and it really does need to have that classic five-pot sound released! That will also tie into a Stage 1 map to push the power that little bit more. The focus will then turn to the interior, either changing the seats or re-trimming them and having the boot build to match. With a baby and a buggy, the boot build has been on hold since the air was fitted, but it’ll happen. And towards the end of the year, I’ll start looking at changing the wrap up; I don’t think it will be a solid colour this time, I’ll definitely be looking at some custom design.”

What’s significant about this dramatic bagged Audi RS3 saloon build is that it’s been one that the husband-and-wife team have done together, working in harmony to create something unique and then using it to get out and about with the family to meet new friends. The project may have had a decidedly sketchy start, and it’s not a thing you’d wish on anyone, but there’s always a silver lining: in this instance, it kick-started a build that’s been a real force for good. And the kids get to ride around in something that’s way cooler than a humdrum SUV. 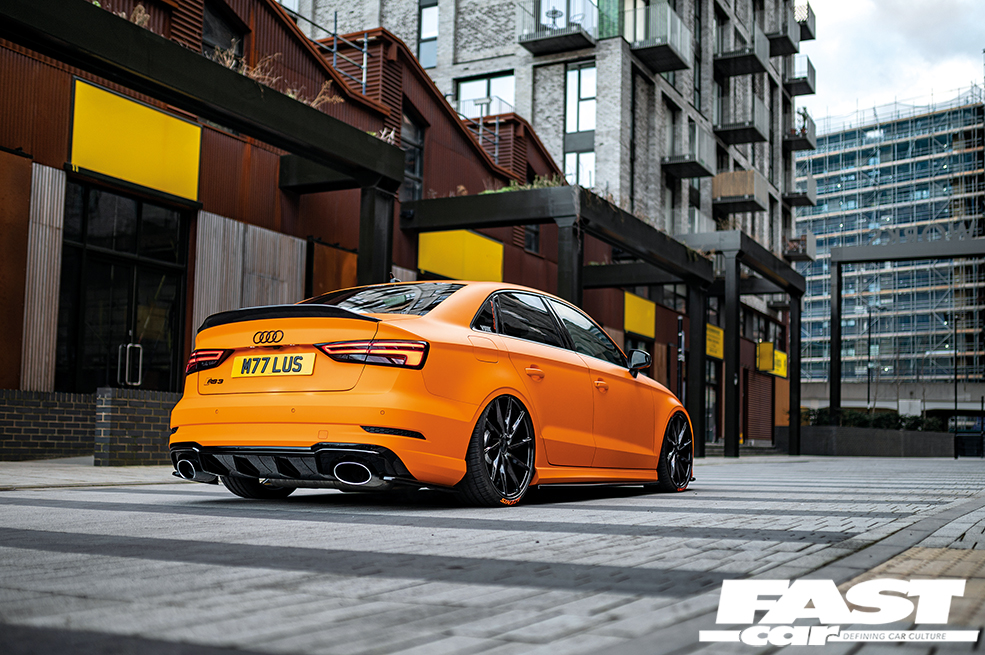