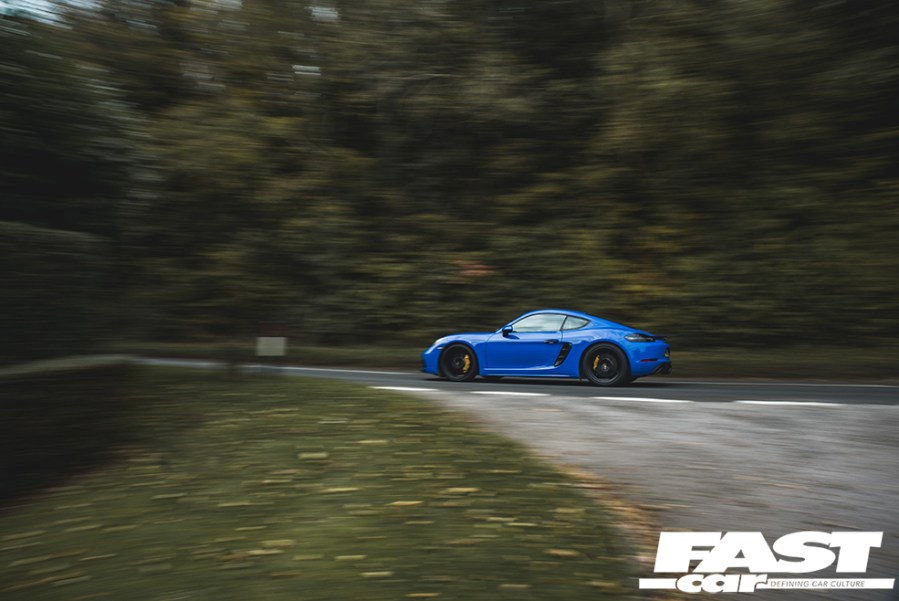 When it comes to sports cars, it’s long been thought that Porsche does it best, but with four-cylinders and a turbo, can the 718 Cayman GTS live up to the title? We find out.

It’s not very often you’ll find us behind the wheel of a Porsche. While they’re fine vehicles, how many owners would want to throw away a warranty in the search of modifications? Some opt for older cars in the pursuit of uniqueness, take this 964 for example…

But now the Cayman is a four-cylinder with a turbo strapped to its 2.5-litre engine, we wanted to find out if this Evo-sounding sports car lived up to the Porsche hype. At £78k with options it’s by no means cheap, but this has been specced to the nines (German pun intended) with Carbon Ceramics (£5-and-a-bit-K) and colour sampled Maritime Blue paint (£6k). It’s also got the latest PDK box for ultra-sharp gear changes.

The question throughout all of this is whether you’d pay more for the Cayman over the Mk5 Supra and M2 Competition, as those are its most obvious rivals. First things first, the lack of two-cylinders is the obvious elephant in the room. No, I’m not going to sit here and pretend this sounds anywhere near as good as those from its German rivals (including Supra…) in search of a few smiles from the Porsche PR team. While it has the crackles to make you smile, to put it bluntly, the M2C makes the Porsche sound a bit lacklustre. That’s important as most of us enjoy the sound of our engines finely tuned through the exhaust…

That’s not to say it sounds bad. Turbocharged four-pots are at the heart of what we love, but this one isn’t unique like an EJ20 or SR20DETT. This is even when the valves are open on the Porsche Sports Exhaust (PSE). Inside, though, when you push through the rev-range you do get a strong grunt that entices you to keep it pinned in third, for example. It’s not tuneful like a flat-six, it’s almost more muscular but flat in tone.

We’ve got four drive modes here, all of which are controlled on a rotary controller attached to the steering wheel. This is neat, it feels expensive, looks expensive and is a doddle to use and within easy reach. Normal, Sport, Sport+ and Individual. There’s a button in the centre too for immediate response, push it and the gearbox will instantly switch to the right gear with the most amount of torque for the speed you’re travelling at. Impressive stuff when you know what it does, but worrying when you press a button that you don’t know what it does on the motorway and suddenly you’re doing 5krpm in third and ready to set a qualifying lap. I might have done that.

Leave it in normal and it’s in its comfiest setting. Throttle response is good, but only do you realise it’s lazy when you switch up the modes. For the most part you’ll be driving in Sport. Suspension here is still comfy, but the PSE valves are open and the throttle is a tad more responsive. The steering becomes a bit heavier, loaded with weight thanks to the electronic steering. Ignore the people that moan about steering feel, the game has moved on, gone are the days that cars are loaded with steering feel. Like it or lump it, this is what we’ve got and the Porsche’s system works remarkably well.

For all the moans and groans I have with the four-pot, by god this thing is fast. It’s “only” 360bhp, but it feels comfortably more. It pulls right through to the redline with barely a hint of drop off in performance at the top end, something which the M cars suffer horribly with. The F8X models, for example, give up the ghost with almost 1000rpm to go, giving you no reason to seek the red line. The 718 Cayman GTS wants you to rev it out and that’s important in a road car.

The gearbox is nothing short of sublime. It’s so bleeding fast. Pull the paddle and it’s already in the next gear. The PDK gearbox has to be the sharpest on the market, it even puts the R35 GT-R to shame in its response. I reckon it takes longer to blink that it does to change gear…

But that’s a problem in itself, the Cayman is so easy to drive fast. If you so wish you can leave it in auto and let it do all the work, the system knows when to change up and when not to, it’s almost reading the road ahead to work out where you need to be. I want to drive the car though. I want to choose the gear I need, I want to physically slot home a gear, I want to be rewarded. While the PDK is so deeply impressive and arguably one of its strongest points, it’s also one of its weakest when pressing on.

You’ll often hear journalists say that if it was allowed to be, the Cayman would be top of the tree for Porsche. They aren’t wrong. Having just jumped out of the hot seat of a 911 Carrera T, I agree. The Cayman is perfectly balanced, it gives you so much more confidence to attack corners and it feels as quick, if not quicker in the real world. The 911, while sublime as it is and my word does it sound good, it’s a nervy car to drive in anything other than dry conditions. The rear is so lively in cold wet conditions and while that’s fun when you want to slide about, it’s less fun on your commute when you’re still half asleep. The Cayman just doesn’t do that, it feels grippier, more sophisticated. It’s the ideal layout, after all.

Those Carbon Ceramics. Wow. OK, they have no place on the road. You have to warm them up to gain any pedal feel and they’re so expensive to buy and maintain that it makes it redundant for road use. But when you start pressing on and start using the brakes heavily they start to come alive. You can brake later and much harder than you otherwise would, it just seems to bring you to a stop no matter what you throw at it. I can imagine that on a track day it would be the best option Porsche offers.

This is a car that’s genuinely beautiful to look at, fools everyone into thinking its more exotic than it is and offers mind-blowing real world performance. The PDK box is nothing short of magical, the shift speeds are impossible to comprehend and the way the car can negotiate a set of corners is why it costs just as much as it does.

That’s where I’m left tied, this car is £78k. Whichever you look at it that’s expensive for what’s essentially a turbocharged four-pot. Is it really £20k better than a well-specced M2 Competition? From where I’m sat, I don’t think so. If it’s poser status you’re after, then yes, the M2C can’t live with the Porsche for looks. But I’m not arsed with that.

While the drive set me alight, in the back of my head I couldn’t shake that this is a near-£80k car. Just think, with that cash you could buy a second-hand Cayman GT4 with a 3.8-litre N/A flat-six that screams to almost 9000rpm and comes exclusively with a manual gearbox. That’s where my money would go.

Either way, the 718 Cayman GTS is a brilliant all-rounder, with more luggage space than the bigger brother thanks to the mid-engined layout (rear hatch and front storage compartments). It’s comfy to daily drive and in a league of its own when the right road presents itself. I just wish it sounded better…

I just spent the whole review moaning about the sound, of course I’m going to suggest work on it. First up, a turbo-back exhaust. It’s a turbocharged four-pot so we can unlock the sound of boost to give it some character. Fabspeed offer a system for that reason. Called the Supercup, you can opt for a decat or sports cat option, but we’d go decat to unlock more sound and performance.

It’s turbocharged, we can eek out a bit more performance, especially coupling it with a decat exhaust. TechArt take the 2.5-litre engine to 400bhp with a simple map, so we reckon with exhaust work we could see closer to 420bhp.

There’s a lot of space behind the rear seats and we think that it could easily be filled with a half cage to add in a clubsport vibe. It works so well on the GT3 model, so why wouldn’t it work here? That bit might not be cheap, but it’ll look the business!